I used to have this other blog, you know. It was called ‘A Picture A Day’ and I updated it religiously with a single photo daily from the summer of 2008 until December 2010. It got to the point where I hardly had time for this blog, let alone the other. So I gave it up.

And now it sits out in cyberspace; a lonely existence.

I’m fine with all that, but one of the things I miss the most from that blog was my Weekly Dose of George series. So in the spirit of trying to bring that element back and incorporate it into my Chronicles blog, my goal is to have a weekly photo of George with a brief explanation.

We’ll see how long this latest whim lasts, shall we?

Because I’m a person of many whims. 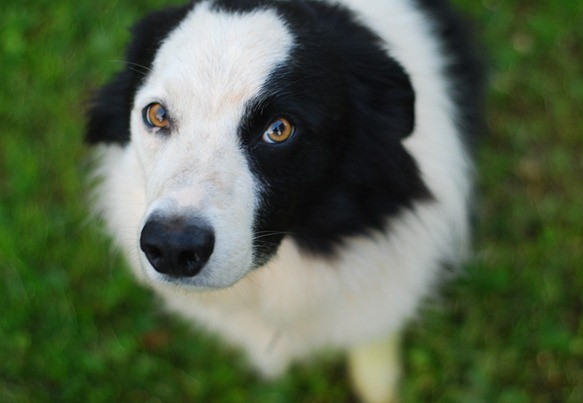 Taken this evening after being sternly spoken to by his master for chewing on a headless rabbit found under a bush.

Maybe I should explain.

My husband found the hapless bunny this morning while on a walk. It was lying under the tree that the juvenile Great Horned Owl frequents, so he kicked it under a nearby bush to get it out of the way. And this afternoon, curious George found it. And for a moment, he was in doggie heaven. (Ick).

Photo is SOOC (Straight Out Of Camera).

He needs a bathie now.

I think I'm feeling a tad queasy after reading that post. Maybe I should have some Cheetos to feel better. ;)

I know George's many fans will be happy for your latest whim.

That is a fabulous shot for SOOC! I'm glad you are going to revive the weekly dose of George. He is super-photogenic, even when he's been a bad boy.

BTW, my cat Jordan says you ought to give him some Tuna Temptations cat treats. She (being an indoor cat) is not quite sure what a squirrel is, but she says it sounds stupid.
xoxo

love it...we watched Down and Out in Beverly Hills yesterday...the dog reminded me of George....I forgot how funny that movie was...

We LOVE that face!

Ick is right! Time to brush the teeth! Love that face.

LOL...I have been thinking of starting another blog! A weekly blog on cute Chicago eateries and boutiques. But then again...maybe I should just stick to one blog!

Get pic of George!!!

well, at least george didn't kill it too like my dogs would have!

...Not a good time to get kisses from George! *shudders* :o\

...This morning I opened the door from our kitchen to the screen porch only to find a dead mouse laying next to the back end of a rabbit. Just the back end; two legs & a butt. That's it. *shudders* Not the type of thing you want to wake up to first thing in the morning. *shudders again*

Such a cutie... who'd ever think he was into bunny-sushi? LOL

Do I ever know that look, especially since adopting a second Lab last week, this one a year old female. Labs don't mature until they're 2 to 3 years old and she's causing Buddy to revert to puppy hood!

ewwww......gross.
for some reason an owl eating a rabbit is just fine, but a dog chomping away on anything rabbit....ewwww

Dogs will be dogs just as cats will be cats ... and I love them all. I also love your photos of George and the little stories that accompany them. He is a beautiful animal and I can tell he is very special.

Heavens... is that all? You should see what Axel brings into the houseyard here...actually, on second thoughts, you shouldn't. He does get banned from inside the house regularly. Stinky boy!!

Great shot of George BTW - you must really have your camera settings spot on!
:-)
BB

I've missed your post. The headless bunny post was a good come back, 'catchy'..lol..oh George. The circle of life. ;)

p.s. G is a good boy...if my fur gal had found that rabbit, there would have been nothing left but pelt. eeewww.

I'm with TJ on the dead rabbit breath thing. George needs some Listerine.

(If a Blog Fest Sister sold mouthwash, would she call it Blisterine? Clearly I need more coffee.)

At least he didn't bring it in the house:)

That's almost as bad as my cat "showing" me the mouse he had eaten for lunch.

oooooh yuck. Sometimes I find only internal organs of thing that were mice in a previous life.

I'm sorry, I was bad...not really....just trying to appease you mommy.

Oh. I'm torn. Because you know how I love my bunnies. And, George is a sweetheart and really only wants to have fun and enjoy life. Nevertheless, poor bunny. *sigh*

Catching up now that I am home, back at the office and getting out from under the crap that was waiting for me .. oh well .. .I am however very annoyed at me because damn it I missed the full moon last nite!!!

That George. I will love seeing him every week.

I haven't been around your blog much, because Emily made her arrival last Monday! I did want to let you know that the Fairy Hobmother chose me for the Amazon.com gift certificate since you said you wanted to know! I am using it to buy books for Emily!

Look at that face! He was just having a little fun. :) Those eyes say it all. (I'll be good, really I will)

He knows exactly what's going on, those border collies are so darn smart! Would you look at that face! Our friends have 3 of them!

George says "but I thought he put it under the bush, just for me to find"

I love a weekly dose of George and I love photos right out of the camera. I will definitely be back to follow along - what a gorgeous "sheepish" pup!

Aww, well at least he didn't behead it. Naturally he had to sniff at it a little though. Poor guilty looking George, he's so sweet. xo ~Lili

walking here with a smile. take care.. have a nice day ~ =D

I have really missed this portion of your blog and welcome it back with relish! He really does look a little sheepish, doesn't he? I guess it's true that they never really lose some instincts.

What a FANTASTIC capture of his sheepish expression!! So glad to see his sweet face!!

Beautiful dog! I love border collies. I used to work for a BC rescue and so I got to foster quite a few of them. Great dogs, but only if you can give them a job!

I'm remembering that George got a new stuffed toy a while ago so I was picturing the headless rabbit being one who was decapitated in order to get the squeaker out!!