Maine in the fog

My husband and I are spending a week on Mount Desert Island, Maine, and our plans  for Tuesday included a visit to the Schoodic Peninsula, another section of Acadia National Park. We awoke to rain and fog and although some vacationers would be less than overjoyed at this fact, I was fine with a change of pace in regards to the weather.

For several days we’ve had the kind of weather I dream about. Warm in the sunshine but cool in the shade, the skies a deep blue, interspersed with light fluffy clouds. 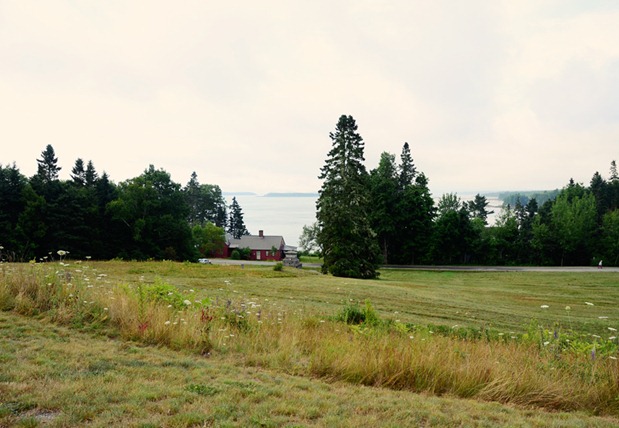 We left the house at 7 and stopped at a store to get supplies then grabbed a completely unhealthy breakfast: an egg, ham & cheese sandwich from a Dunkin’ Donuts. Geez Louize. The coffee was damn good and we sat and ate our breakfast at the view point above. Normally you can see the mountains on Mt. Desert Island from here, but the fog obliterated them this morning. 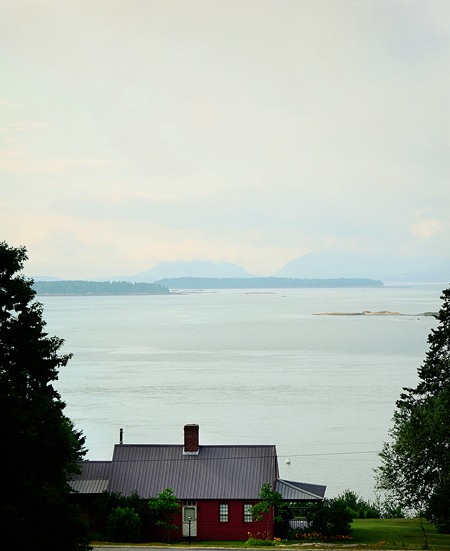 This was the former location of the Waukeag House Hotel, which was very popular with the summer rusticator crowd from around 1877 to 1900. I have no idea when the house in the photo was built. The old hotel sat back quite a bit from this site. And look – you can see the mountains a little more here. 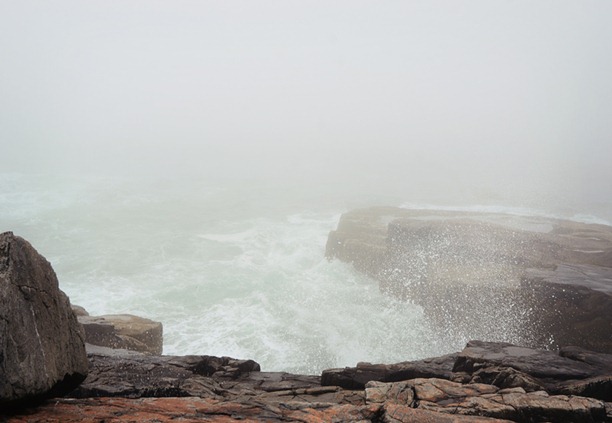 Then it was on to Schoodic Point where we watched the waves crash against the rocky coast. 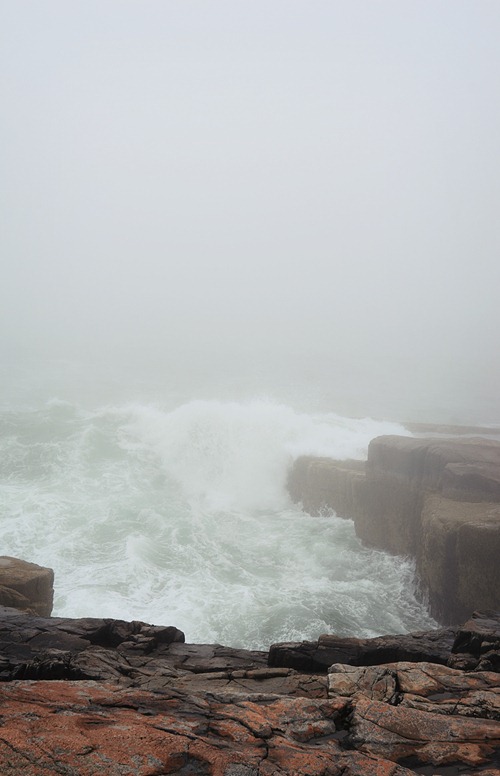 I didn’t want to get too close. It was pretty intense.

I shot a little video of it but couldn’t get the old embed code to work in Vimeo. 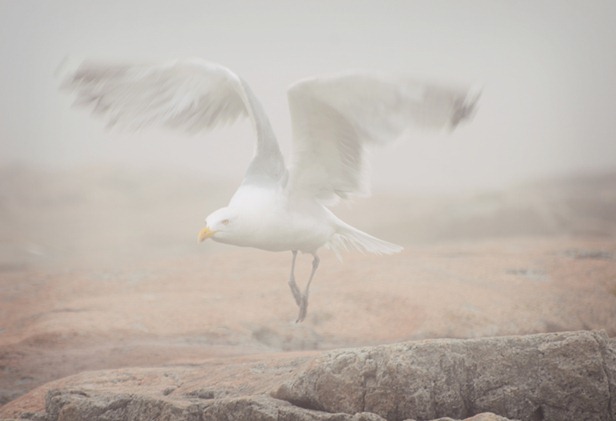 Then I took photos of seagulls in the fog. 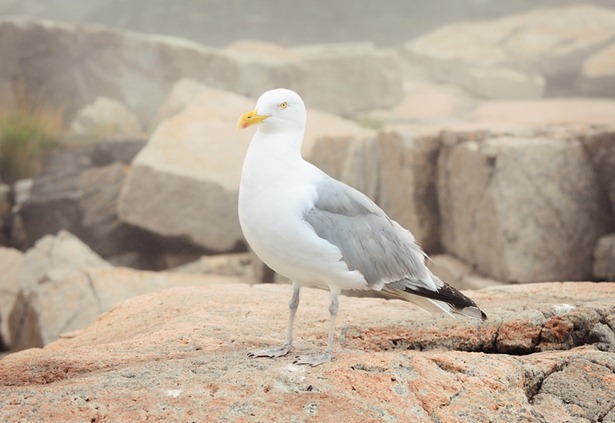 I had the long lens on for this one but was permitted to get within just a few feet of it. 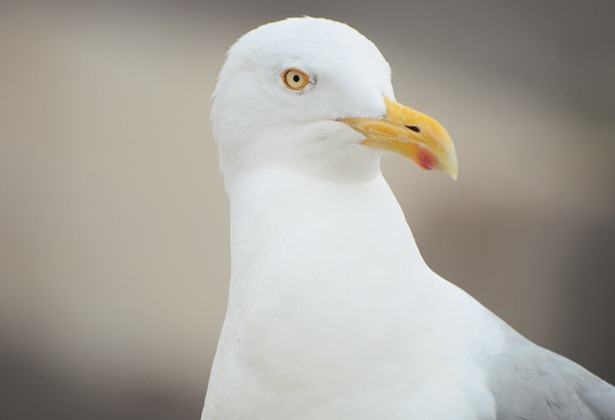 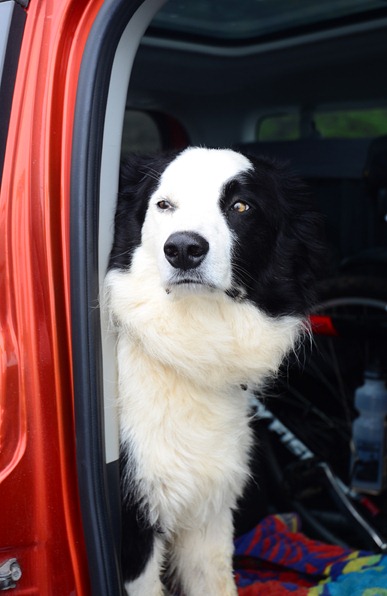 Look at this face.

Oh, my stinking heck. This dog does NOT like the loud, booming noises coming from a coastline he can’t even see through the fog. And he much prefers the safety of the car.

And there is nothing wrong with that. 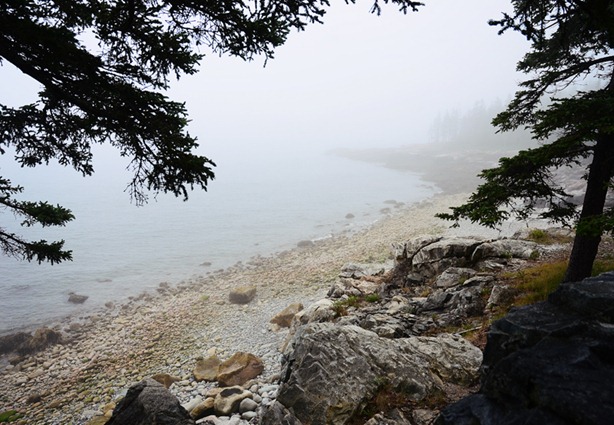 Further down the road, it was much more quiet. 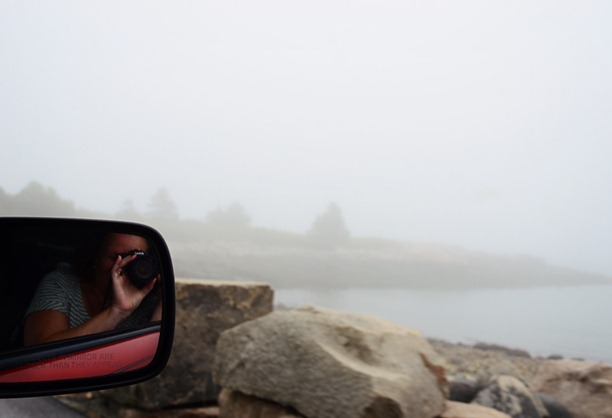 We’ve always stayed on this side of Acadia National Park

and are pretty familiar with the area. 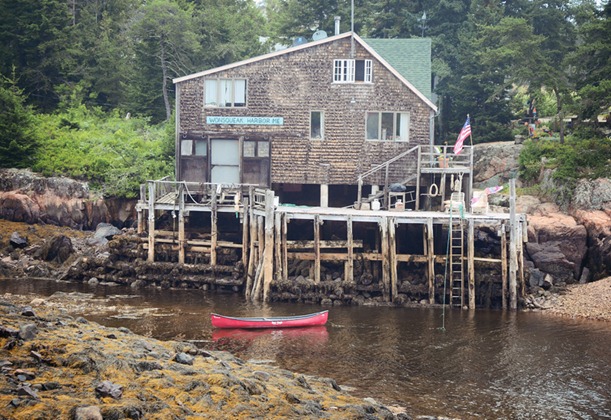 The house at Wonsqueak Harbor.

More photos of it {here}, at Flickr. And I saw one I took last year. 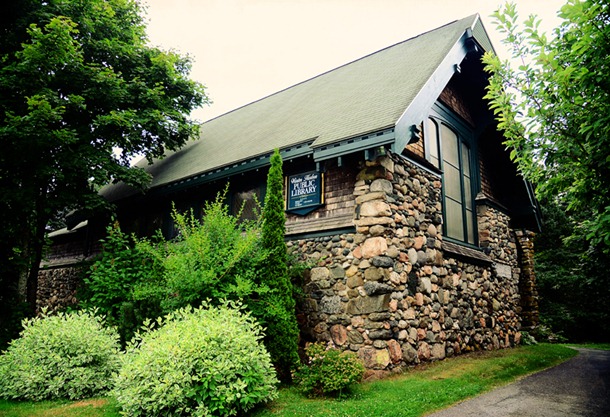 The public library at Winter Harbor is a former chapel. 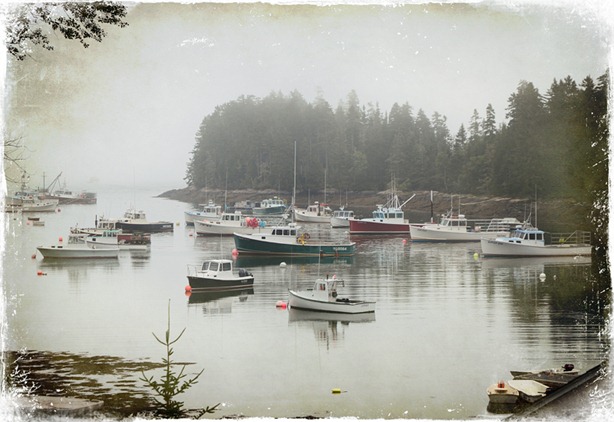 Lobster was 6.00 per pound for hard shells there. In Southwest Harbor, I saw it for 3.49 per pound. Good grief. 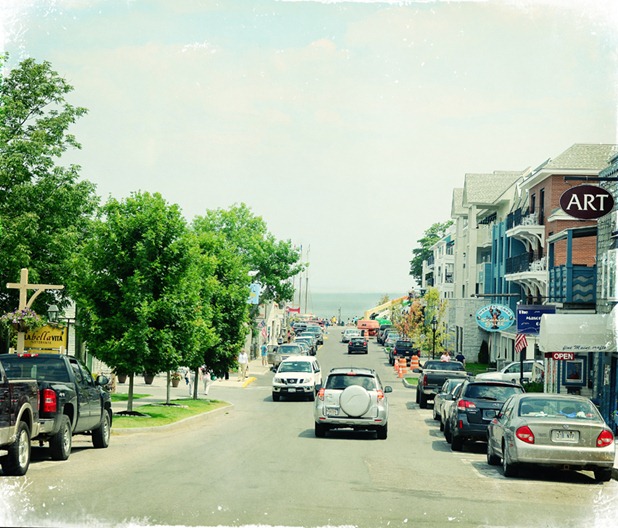 And when we returned to Bar Harbor later that day, the sun was shining and it felt like summer. We are not staying in Bar Harbor, but enjoy driving through. All along West Street it looks different with the new condo/hotel rooms that are on the right. They’re all part of the West Street Hotel. 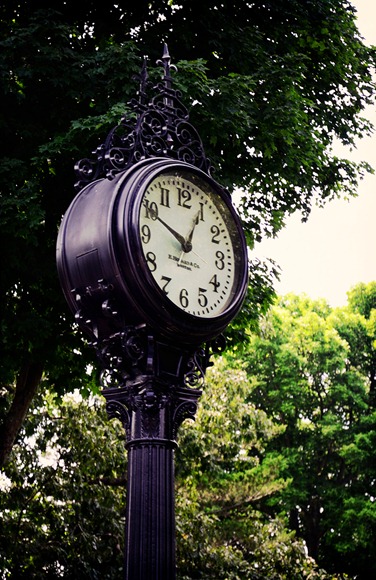 Time to go. We’re off on another adventure ~

and I’ll keep you posted.

Thanks for the trip to Acadia and Bar Harbor...one of my favorite areas on the face of the earth.

oooh, just love it all. Thanks for taking the time to show us....

Thanks for sharing your vacation beauty. Make some memories.

Oh, poor George. Sorry, I couldn't help but laugh when I saw his expression. There are some gorgeous shots here.

Really Really beautiful there! I can see why you return to Maine each summer. :-)

Oh gosh, I visited Bar Harbor many years ago and remember going out on a schooner, going on a hike, and staying in a B&B. Oh yes, and eating LOTS of lobster. Nice photo tour.

that's totally my kind of day, too.....i am an early in the morning fog kind of girl....well actually i love it when it rolls in in the afternoon, too :)

you make maine look even more beautiful than it is....and that my dear, is a talent !!

keep having a great time and those dunkin donut breakfasts are what vacations are all about :)
xo

What a beautiful place . They way you described was awesome and your photos are Fantastic ! Thanks for sharing . Have a great rest of the trip , looking forward to more photos !

I love how fog and mist can give a place a completely different look and feel, and your pictures capture it beautifully! And George would be in good company with Mr. Quinn and our sweet departed BC Kylee, I know that look!

Oh poor George! Poor fella. But I'm sure he's enjoying his walks with you. And the lobster prices are unreal! Some of the lobster men are upset about the over supply and as a result, not hauling more in. Eat up!

I love Schoodic Point when it's stormy!

Thank you 4 the beautiful scenery photos of Maine. I enjoyed the trip, right from my PC ;) I always enjoy your photos.

I just love these photos!!! But my 2 faves are George (that face...LOL) and you in the mirror...so awesome! Enjoy the rest of your trip!

I did enjoy this post very much, what a fabulous place. That first house by the shore, what a fantastic position.

What a gift you have given us- thank you for taking time out of your vacation to share it with your readers!

Thanks for the photos of one of my favorite areas. It was nice to see Schoodic Point again. I sold my place in Maine a few years ago, but it was located in Addison which is about 30 miles further north east along the coast from Schoodic and we used to drive to Schoodic 2 or 3 times a week. Your pictures made me homesick.

Lovely tour of the coastline - loved that photograph of the seagull landing in the fog too.

Poor George, I don't blame him
loud, booming noises bother me too

These are wonderful...I feel like I was there. And I think George has his eye on those seagulls. Especially love your photo of you reflected in the sideview mirror...great color against the fog and mist. Excellent!

I am having quite the nice vicarious vacation...Thanks!

Love the "foggy" pictures, really adds atmosphere, those ones of the seagull in the fog are outstanding.

Cracking up at the expression of that gull's closeup! And I just love that George and someday I'm gonna actually meet him!! What you did with that Winter Harbor co-op pic is very cool. Love looking at your Maine pics, you always present it with fresh eyes. xoxo ~Lili

Oh my .... you have to know that the seagulls steal the show for me. Your landscape shots are exquisite.
Glad you are having FUN!