Gifts for you from my husband who was sitting outside on the patio this morning snapping some photos. He used the old Nikon D80 and the Quantaray zoom lens he seems to prefer. He shoots in sport mode for the hummingbirds. I actually prefer shooting them in manual or shutter priority so that I can get the wings frozen in time but his sport mode did an ok job of it, I think.

Overlays (the edges) are from Shadowhouse Creations. 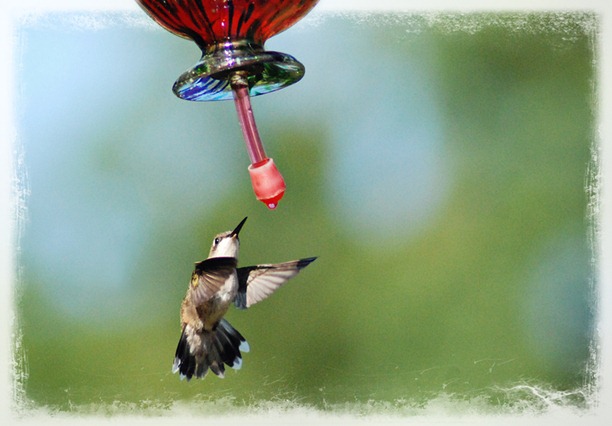 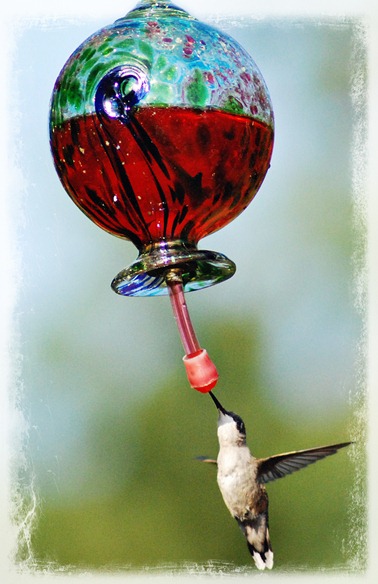 And I love this hummingbird feeder. 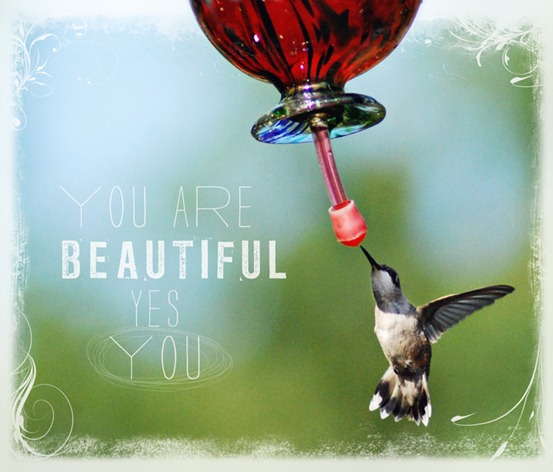 You just don’t know it yet. 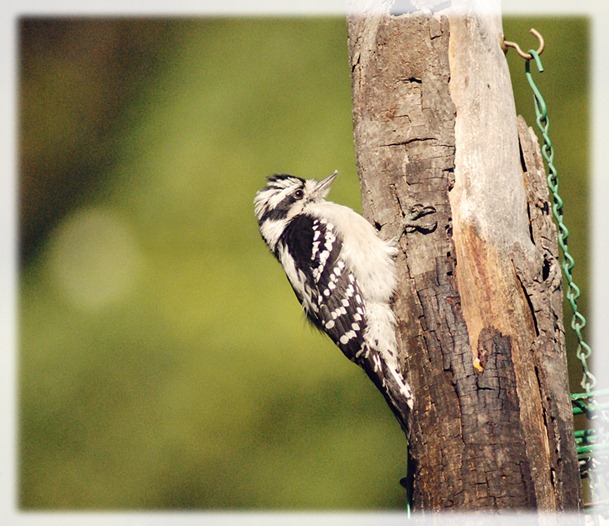 Does this tree limb make me look fat?

Maybe you can settle an argument I had with my son at the dinner table. Ok, it was more a hotly contested discussion than an argument, but it provided some lively dinner conversation. And it involves something so silly – tipping for take-out meals.

Lately, I’ve been frequenting the nearby Chili’s at dinnertime much more than I care to admit and every time I go, I leave a dollar tip in the jar at the take-out window. I think my dollar tip is quite adequate, but my son, on the other hand, says it should be a percentage of the meal total and basically accused me of being a cheapskate.

My husband said nothing. I do think he was enjoying the entertainment, though.

I do not think it’s generally required to tip for take-out from a restaurant when you are going inside to pick up the meal. Yes for curbside service, and yes for delivery, but really not necessary when you go inside. My son argued the point, saying that those people are bagging it up for you, making sure everything is included and the order is perfect so they deserve a tip – maybe not what you would tip for a sit-down meal, but still more than what his skinflint mother leaves.

I disagreed, then after the meal was finished, looked it up online, and found that it was a hotly-debated subject on a couple of websites. But I didn’t feel really justified until I read Emily Post’s take on it.

And so I e-mailed it to him. And from now on, I’ll be sending HIM to Chili’s and he can leave whatever he wants.

And that’s what I have to say about that.

Well, I bookmarked Emily Post's tips for tipping.....great page.
I agree with you.......a buck would have done it.
Really.
Although I am a generous tipper to waitresses, that is quiet different.
Your husband got some incredible shots.

Definitely---send him and let him pay what he wants! We tip very generously to waitresses an waiters when they serve us personally---but when we go in a restaurant and pay for and pick-up our meal...nope. Maybe that's why it seems something is always missing! ;) Actually, we live in such a small place, I don't recall a tip jar at the counter when we pick up pizza ---(those oh so rare occasions,it seems!!) Interesting conversations.
What was the last bird, by the way? I could almost FEEL his feathers! Tell Hubby he did great.

I am a good tipper normally. But, I don't tip when I pick up takeout. Maybe I am out of touch. Can't say I have actually ever seen a tip jar when I pick up.

You are both right I would say ! Here it is 15% of what the bill is if you are having it in the restaurant or getting it delivered , but if you are picking up the food no tip is required its the customers choice whether to leave a tip or not ! Your husbands photos are amazing well done he really stopped the hummers wings beautifully ! Where did you get that cool feeder ? I would love to have one like that for our hummer photos ! Have a great day !

I haven't read Ms Posts take on it yet but i agree with you...delivery yes....curbside sure....but honestly at some point (bagging it up) aren't they just doing their job?? Hugs! deb

If one cannot properly tip, one should not eat out- HOWEVER
in this situation I think you
are more than fine with your dollar.

I admire your son's heart, though!

I'm with you and that's what we do! I love your solution ... send him and he can leave the tip! HA!

Nope don't usually tip on take out. Sometimes I leave a dollar...

I usually leave 10% but never any more than 3$ for take out or the restaurants where you order in line and then bring it to you but don't do any other service, checking up on, etc but I always feel like I am overtipping for that....

Beautiful pics, he did a great job! And I have never even seen a tip jar in a place that you pick up carry out from...hmmm. Our Cheeseburger has carry out that you go inside to pick up and I've never seen a tip jar. And another locally owned pizza place doesn't have a tip jar either. There is a candy money jar at a local Mexican restaurant, and sometimes if we each take a mint we put money in the jar. But the owner told us one time that it wasn't necessary, so now we are confused about what to do! ;-)

Please tell Husband that I love his hummer photos ! As for the tipping debate--bigger picture: you and son are both winners. Son has a big heart and you win for raising a young man with compassion...to me the greatest quality for any person.
LLC

Oh your hubby has done a FABULOUS job with these! I hope he continues!!

when i get coffee at Irving Farms on the weekend i always leave whatever change i get back as a tip .. its self service so should i be tipping me for bringing my coffee/cheese biscuit to the table or for taking my coffee cup to the trash? you are NOT a cheapskate .. i agree send him to pick up the take out and tell him to tip out of his own pocket not from the $$ you gave him to pay for the food.

I don't tip for takeout either, but I am a generous tipper for waitresses/waiters.

I used to never tip when picking up coffee until my daughter, who was a barista at the time, told me how much she hates that. She explained that she used her paycheck for bills and her tips for fun. So, then I started tipping the coffee place. I don't think I have ever tipped for takeout. Both of my kids are always lecturing me about the poor suffering food industry staff. They always guilt me into bigger tips. Maybe I need to re-think the takeout. Or just send them...

I don't think you are required to give a set amount when doing a pickup.

They are not having to "WAIT" on you for a time period that it takes for you to eat a meal and fill your requests at a table.

I do tip when picking up take out from my favorite sushi place. If it's somewhere new or I fell like they did a bad job getting me the take out then I don't tip them.

I'm with you, for take-out, I don't think a tip is at all necessary.

To me, a tip is for service, not a purchase.

Love the hummingbird shots, and that feeder, so cute. I had a similar one, but it always leaked, so I stopped putting it out.

Lovely photographs - we don;t have humming birds in the UK, although I have seen them a few times in both the US and Canada.


Re tipping - it is interesting, as there is no tradition at all of tipping in the UK - we would tip a taxi driver, or maybe leave a tip on the lunch table after a meal, but that is about all. That is why we find it so hard when we go abroad - we are always uncertain what to do exactly.

Whatever the right answer is, I think your solution is supremely correct!

Is ay a buck is enough in those tip jars. We do however tip 15% or more at a sit down dinner.

15% or more when someone is actually "waiting on me", and I am seated at a table in their place of biz. One dollar is about how much service you actually received...your solution is PERFECT!

I live in the outback of California. I didn't know there were still bellhops. ha. I loved your husband's photo's.

I love Annie's diplomacy. ;) And don't you just love it when our kids are so generous.. with our money? I agree with you and Emily. That dollar was just fine.

My ex-husband was adamant about not tipping for take-out and I picked up that habit from him. I do tip generously when I'm being served though.

A Mother's wisdom at work!

What a beautiful gift of hummers to look at from your husband. And you must have post processed them too...wonderful collaboration! Your son just has a big heart that he I'm sure got from you. I don't believe I have ever tipped for a take-out order. xo ~Lili

my take...at some places the tips are split between the kitchen and the front of the house. at some, the wait shaff tips out the kitchen and the bus boys. we had the amazing pleasure of actually owning a fine dining house...happily i am now able to rejoin the outside world...without crying...it is a HARD biz. take out has to still been prepared by the kitchen, bagged and 'served'. they should be tipped. how much depends on the bottom line but i would say more than a dollar.
bv xo

My daughter waitresses as a second job. She says that if you're picking up, no need to tip. If you are actually being WAITED on, and your waiter/waitress gives reasonable service, please reward them. :)
We went to a Starbucks drive-thru the other day and there was a tip jar on the window ledge!

your hubby did a great job !!

and i'm with you. if i'm going in to pick whatever i ordered, i leave a dollar.

i don't think bagging up our food is really anything compared to actually waiting on us at a table.

Wow -those shots are amazing!

LOVE these pictures! I have a thing for hummingbirds and these are great.

And what kind of tip did your son leave after dinner?
Oh the pictures are great, sorry to get side tracked.

Wonderful shots by your husband, he's quite good with the camera!

As far as tipping, I never used to tip on take-out either until my daughter worked in a couple of those chains as a server. I received quite an education from her experience, namely that they are taken off tables to handle the take out service so they earn less for the shift. With a salary of $2/hr being stuck on take-out can be a hardship. They are there to check and pack your order and in some cases deliver to the car. In either case I've taken to tipping for the chains, generally about 10% since it is not full service. Just saying ;-)