It’s been raining and/or gloomy for days on end now, and the air is thick and warm, saturated with moisture. Kind of oppressive, actually. I mean if you let that sort of thing get to you.

And how could you not after so many days of it?

When I came home today, I saw this photo as the background page on my husband’s computer screen. 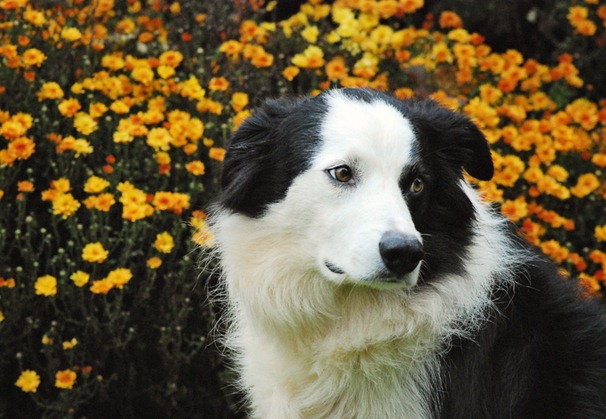 He decided to take some portraits of George today and I commented on how much I liked this one. He said he had more, but that “George just wasn’t into it at all.”

He told me to go ahead and look on the camera chip because he’d taken several photos and George wasn’t having any of it. And when I looked, I saw exactly what he meant. 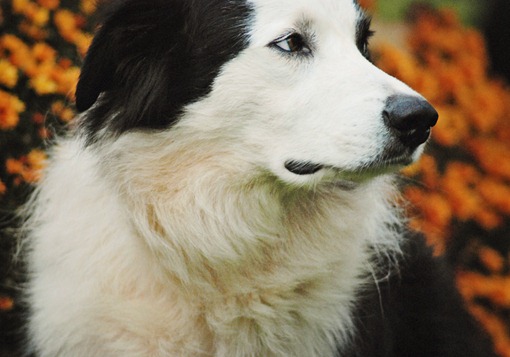 He had a general air of disinterest about the whole session.

And George usually loves the camera. 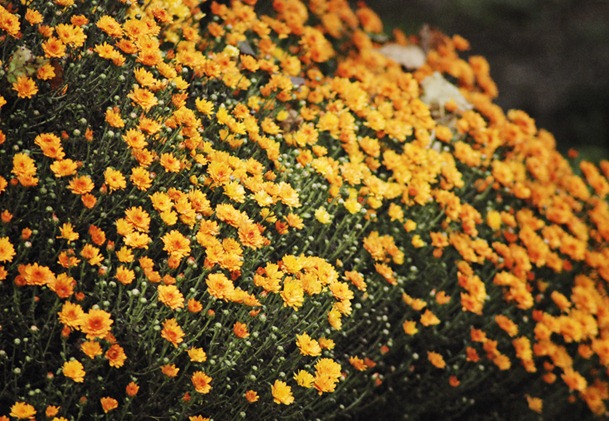 Judy’s flowers were cooperative, though.

(I love this color.) 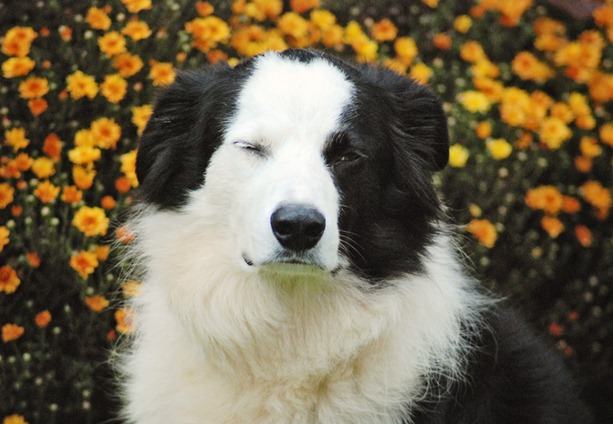 But George would’ve rather been taking a nap. 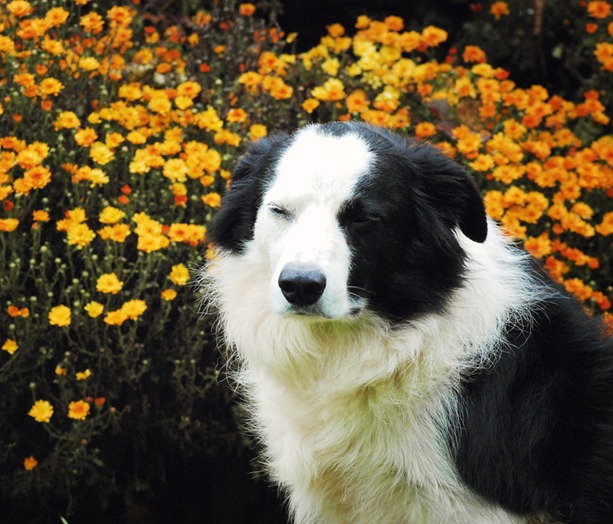 My husband said he asked him what the problem was. 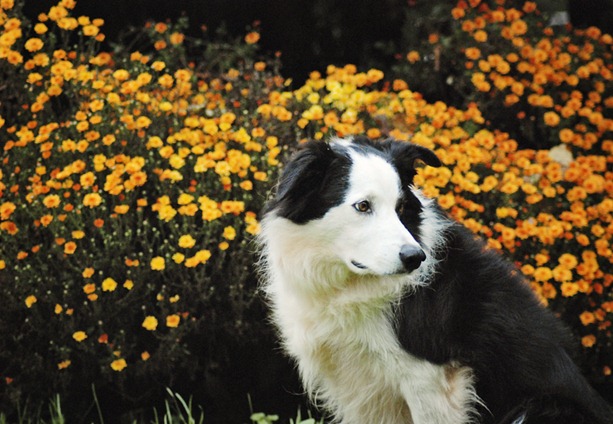 And then he began 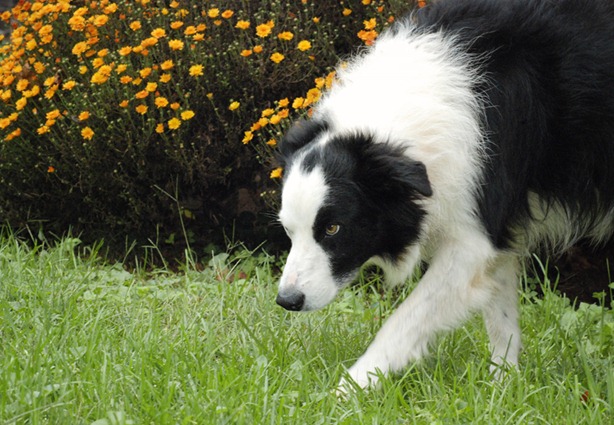 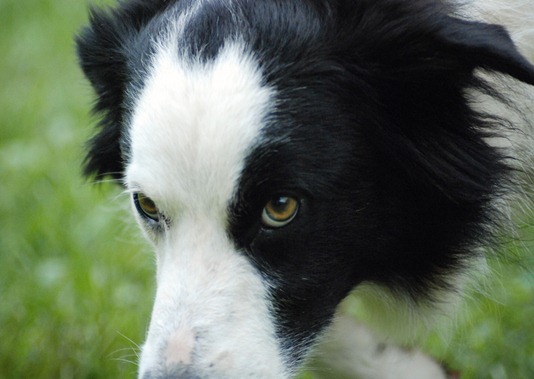 It was just another

But as I write this, the sun has burst through the darkened skies, the humidity is lifting, and I can feel a lightness to the air which suddenly feels a little more like 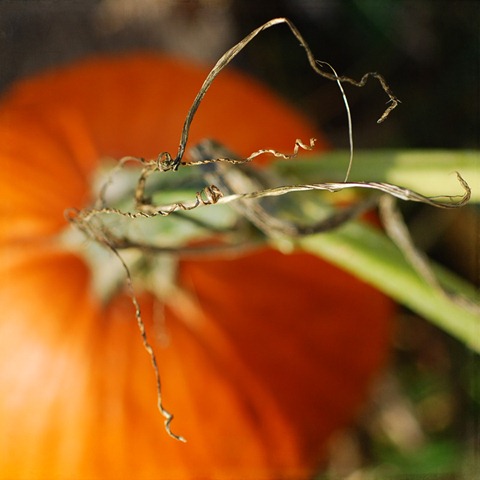 And my husband is making dinner tonight.

And feeling much better.

Love the first picture, and love that your husband is feeling well enough to cook you dinner.
I hope it's lovely.

have a wonderful meal and tell George it's over...Autumn is on the other side of the rain...58F on sunday? YUMM!!!

The only way Riley will be photographed is with heavy bribery of many many cookies. And it's impossible to photograph a black dogs when they are feeling contrary! Those are my favorite color of mums too. I'm trying to get around to my favorite blogs more, but I never seem to get far. have you guys in my thoughts and prayers though...

So glad your hubby is feeling better and that the weather is lifting.
.....even with his eyes closed George is one handsome DUDE!

It hasn't been cloudy here, but rather too warm and quite humid. I'd like to take a few of those clouds from you and fly them over our house for a day or two...

I believe your day has ended on a high note...a wonderful thing! And you have given me lots of laughs with the 'George series.' Thank you so much! Happy dinner!

Fantastic photos ! I am glad to hear your hubby is feeling better . I was worried . As for George well he maybe getting a little tired of feeling wet and damp all the time lol Miggy can be the same on never ending rainy days and she herself also loves the camera ! Oh your getting dinner cooked tonight ? lucky girl ! Have a wonderful evening !

Even the most beautiful/handsome models have their off days! :) I was so happy to see the sun shine this afternoon I could have danced. So glad your husband is feeling better, I hope you have a wonderful weekend!

George might want to join my Hibernation Movement, which believes we need to take our signals from Nature vs. the work schedule or alarm clock. If it's dark, that means we sleep. If the sun is out, we're good to go.

Next meeting is Friday at 7. The Vitamin D cart will be wheeled through after 30 minutes under the artificial light.

These were great! Sorry about the humid days. I am against that kind of weather. Bet'cha you had super cute curly hair tho?

(glad the hubs is feeling so good!)

glad that the weather and the mood are lifting :) and glad your hubbie is cooking for you....

Today, for the first time in weeks, the sun came out and it was beautiful. And suddenly, I felt much better and actually got myself out for a walk.
I hope some of that sunshine is headed your way.
Poor George. Maybe he just thought he was having a bad hair day. I know I never want anyone to take my picture on those days.

So happy that he is cooking supper! A good sign indeed:)

George is so very expressive...he certainly is letting his feelings well known...and I am feeling malaise myself these days:)

Sorry that George wasn't into the photo shoot. Sometimes, you just don't have it in you to smile for the camera! The flowers are certainly beautiful, and I'd love to partake of that cooler October weather. It's still hot, humid and rainy here. I'm looking for those cooler temps.
xoxo
Donna

Glad to hear your husband is feeling better.

George made me laugh a lot. Quite a few of the photos haven't loaded but I think it's probably a problem with my computer rather than yours!

So pleased you're having your dinner made for you; precious times.

George is just so cute. My dogs are the same way. When they aren't in the mood... forget about it!

Always love me some George. We're getting the rainy, dismal weather here now. Ready for it to be over and feel like sunny, crisp fall days!

I so get George's mood. So does Dora;) xoxo

thankfully our furry loves can make us smile even on gloomy days....

sophie hated the camera and always looked disinterested and slinked away from me, so i totally know what george was doing.....

and i'm glad the sun poked out for you and that your hubby is feeling better...enough so to cook !! i hope you have a great weekend !!....xo

Our animals really do pick up on moods, don't they! It's amazing how our feelings reflect in theirs! I am sure you know how to perk our buddy George up! :-) He's such a beautiful boy!

aw Mom, everybody has a bad day every now and then

Yeah!! that your honey is feeling better today. And it's always wonderful when someone cooks for you, enjoy.....So what is your take on George's feeling blue?
October is proving to be quite beautiful here in northern New Mexico...but they say some cold is moving in.
peace n abundance
CheyAnne

Even George could feel the "funk" in the air. :) I am really going to have to buy some mums this weekends yours are just gorgeous!!

Awww, poor George. Maybe he's like me and doesn't like the dreariness of fall. It's been dark and moist here for a few days and the cool has crept in. I don't mind fall but I so need the sun.

Glad you are having a lighter day. This is a perfect post. George's expressions, your husbands connection with him, the love you all have together. Hope you had a good dinner and that George is bouncing today.
Strangely another friend of mine who blogs also wrote today/yesterday about her collie being emotional. Her eldest daughter has gone back to live in Canade and her dog is feeling vulnerable here in Catalunya because someone in the pack is missing. so he is following my friend around and keeping a close eye on her.
mine is here by my side, sleeping after a too hot walk
love Kate x

Oh, George, I know just how you feel.

So glad to hear your husband is feeling better!

I truly love your last few posts and have neglected to tell you so. The nature shots in real (natural) color are always my fave. What an eye you have for grandeur. TY for sharing with us!
Truly!

Forgot to tell you how perfectly "malaise" describes the way I have felt for awhile. And I also forgot to ask what hubby cooked for dinner!Mine does not have that particular skill. :(

Love the pictures of George.. The first one was a keeper.. Something that would look good in a frame.. George reminded me of my grandson, Ben. It depends on what kind of mood he is in so I can get a decent picture. Love Judy's flowers..Had to cover my flowers ~ suppose to get a freeze tonight.. I wish it would rain here in Iowa.. We are in a severe drought here and it's not nice.. So glad you are getting rain..
Great that your hubby fixed supper for you..How awesome is that~! I think food tastes better when our husbands fix it for us.. Don't you think?
ta ta for now from Iowa:)

Those photos of George not being into his photo session are truly priceless. That is so funny that he literally has his eyes closed while he is just sitting there! What a sweetie. xoxo ~Lili