It was a beautiful weekend and I enjoyed a peaceful Mother’s Day. I took a salad and a dessert to my in-laws house for brunch. I wanted the dessert to be special because it was my mother-in-law’s first Mother’s Day without her youngest son. It’s the holidays that are often the worst when you lose someone, isn’t it?

I decided to make a trifle and made the entire dish from scratch using a recipe that I found on Pinterest. My mother-in-law asked me what alcohol I used for it and I said, “What? There’s supposed to be alcohol?!!” I had no idea. But I think everyone enjoyed the first-ever non-alcoholic trifle.

I took a picture of it before we left for NJ. 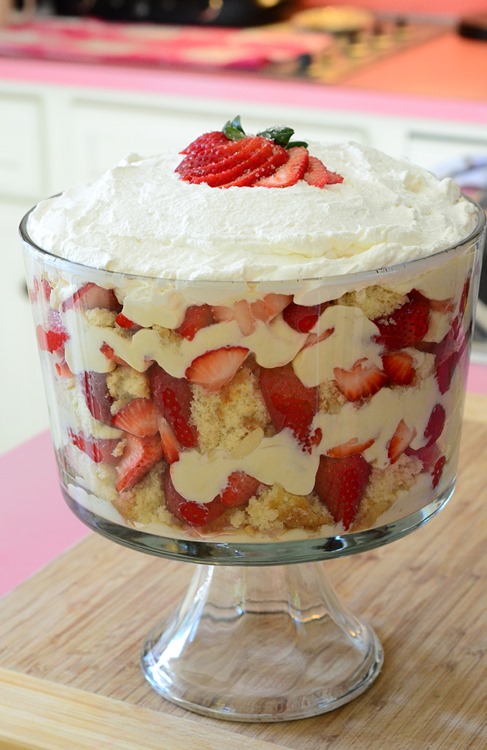 It was a bit time-consuming, but entirely worth it for a special occasion. The custard was surprisingly easy to make. 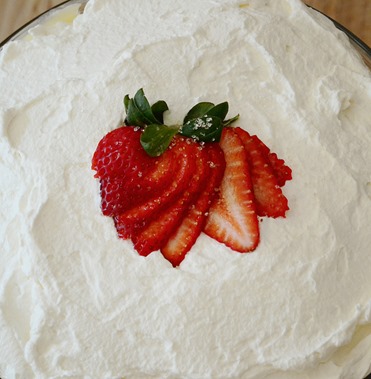 After brunch, we came home to Maryland and I tried to get some pictures of the bluebirds who have nests in nearly every box we have along the fence line.

It was a good day.

Until tomorrow, my friends ~

That really looks good, Kate!! Glad you had a good day with your inlaws. Was it cold up your way?

I looks delicious, and I bet not one bit fattening, especially since you left out the alcohol :) Have a great week..

How YUMMY ! does that look ! Wonderful with or with out alcohol ! My mum made Trifle it is one of my faves with or with out the booze lol ! I am glad you had a nice Mothers Day . I did to and it was quite as well, I had a phone call from our kids that was nice chatted for an hour they are all off living their young adult lives lol all are well ! Thanks for sharing . Have a good day !

My heart goes out to mothers who have lost their children - on Mother's Day and on their child's birthday, especially. It's a heartache I just can not imagine.

It boggles me how parents get through losing a child no matter what the age. I can't even think about it. Your dessert looks amazing and I have been craving strawberry shortcake for weeks. This isn't helping ;-b Hugs, Deb

So glad you had a great weekend! And that trifle, oh my! Awesome!

That trifle looks divine!.. I might give it a go...

Happy Mothers Day to you -

I'm glad it was a good day. That looks totally delish. My favorite, in fact. You may make that for me any day, my friend ;)

I had no idea it should have alcohol either, lol.

We have tons of nesting blue birds too! xo

I've had many an alcohol-free trifle; yours looks scrumptious!

My God that looks delicious! Years ago I bought one of those bowls to make trifle with but it is still wrapped up in my storage room...never been used lol!

Fluffy Kate - the trifle queen!! looks fantastic - but wait LOL, no alcohol!! How can this happen??

ah man....again, i licked the screen. i should really stop doing that, sheesh.

If it tasted half as good as it looks, it had to have been the best dessert ever. That's a work of art.

Wow, that is not only beautiful, but I bet it tasted amazing...with or without alcohol!

I can't wait to see some bluebird pics.

The trifle looks beautiful...it's ages since I had trifle, now I feel like making one!

Oh it looks Yummy!! I've made trifle and never put alcohol in it .... I never knew that!

Howdy! I'm at work surfing around your blog from my new iphone 3gs! Just wanted to say I love reading through your blog and look forward to all your posts! Carry on the superb work!

Here is my page; anxiety in the morning

When I come over, let's put some alcohol in the one you make for me. Okay?

Oh my, that does look delicious. I think I could eat the whole thing by myself. Well, maybe not... But I would try!

My father passed on in December, and all the holidays have been hard. Mother's Day is actually the first that we (mytried getting together, at my mom's. We had a nice quiet lunch (I picked up sushi and baked a pie for dessert) and chatted. It was nice and I think my mother enjoyed and appreciated it.

I'm really enjoying the design and layout of your blog. It's a very easy on the eyes
which makes it much more enjoyable for me to come here and visit more
often. Did you hire out a developer to create your theme?
Excellent work!

I never use alcohol in my trifles Kate and they always taste delicious.

I want some (okay, all!) of this!!
So glad you had a good day Kate, and this trifle really does look amazing.

I'll take mine without alcohol any time.