It’s the early evening of what was an incredibly beautiful spring day. A ball game is on the television and my husband is on the couch half asleep listening to it. The crazy male cardinal that’s been banging against our living room window for the past 5 weeks is at it again. I had originally thought he was trying to show dominance over a remnant pot of poinsettias but they’ve been long gone and he’s still dive-bombing the window.

George is napping by the front door but there is a big pile of his toys next to me and on the floor by my feet. He must have brought half his toy box out here while we played indoor fetch earlier.

I am starting to feel the incredible stress at school that begins about now and lasts until report cards get mailed the second week of June. I can’t handle five more weeks of this and have already begun to dread what should be a fun time of year. And to top it all off, I just looked at all of the photos I took at the Alumni Banquet last weekend – my son’s 10 year reunion – and they are absolutely horrid. 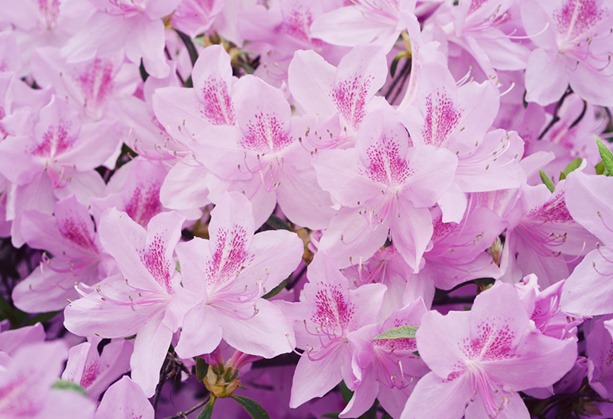 Despite the beauty of the season, I had a completely horrible day.

I tried to write about it but after erasing it for the third time, have decided to simply leave it as this. Because all it is, is a bunch of complaining. 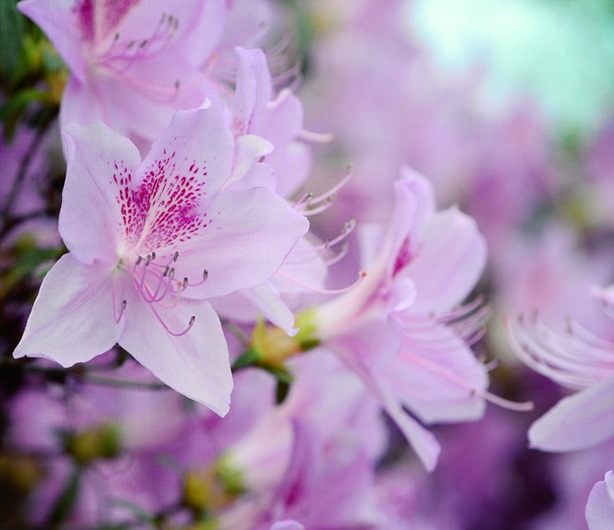 And who wants to read that? 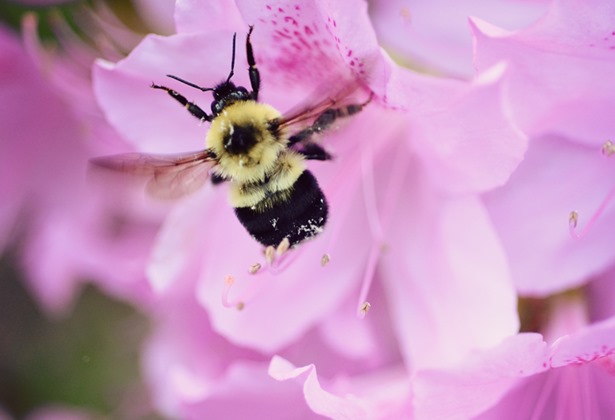 I’m sure tomorrow will better.

Heard this on the way to school today and liked it.

I wish there was something I could say to help you but there are no words, is there? I do know how you feel...my hubby is very ill also.

I hope these beautiful, fragrant, refreshing and hopeful images are a precursor to your next many days.

I am so sorry, Stephanie. So sorry to hear that.
I just had a crap day is all. Things will get better and I hope they do for you as well.

Have those days myself on occasion. I usually convince myself that "this too shall pass".......it is the only thing that gets me through.
Here's to better days, Kate.

If you need me to try and use some of my post processing software on any of the images, just let me know.

And I hope you and Stephanie, the other commenter have brighter days ahead.

P.S. the images are gorgeous, especially that bee!

We all have these days and I hope you can take a few minutes to be kind to yourself.....

I pray tomorrow is much better for you....

The sun will come out tomorrow ... bet your bottom dollar!
Hugs
Willow

I have found that I rarely have two crappy days in a row. I hope this is the case for you, too.

Hang in there and just take things one day at a time. You will get through it even if it seems overwhelming.

I just queued up tomorrow's blog post which also has closeups of flowers but yours are far better! Gorgeous shots, as always.

Hey, today may have been crappy, but tomorrow is Friday. Hope you have amazing plans for the weekend. If not, now's the time to make 'em!!!

A shared load is always lighter. If you give us each a tiny piece of your bad day we may be able to turn it around for you.

Remember to keep breathing and time will pass and a new day will begin with a chance to start over....
{{{{hug}}}}

PS: love the bee shot..... It makes me smile. Look at it again yourself and let it make you smile....

Sorry about your day ! I hope your day is better tommorow !

Some days are just like that. Maybe it helps us to appreciate the good days. Wishing you a lovely weekend to make up for it.

May your wish be granted. Love your photos.

Hey! I know this is kinda off topic but I was wondering which blog platform are you using
for this website? I'm getting fed up of Wordpress because I've had issues with hackers and
I'm looking at alternatives for another platform. I would be great if you could point me in the direction of a good platform.

my blog ... armitron watches for men

I hardly comment, but i did some searching and wound up here
"To better days". And I actually do have 2 questions for you if it's allright. Is it simply me or does it give the impression like some of the remarks appear like coming from brain dead visitors? :-P And, if you are posting on other sites, I'd like to follow anything
fresh you have to post. Would you list of all of your shared pages like your Facebook page,
twitter feed, or linkedin profile?

Feel free to visit my blog - armitron watches for men

I'm having a bad one today too. Am hoping a slice of cake might help. Tomorrow will be better, or if not, the following one!

I can relate to having good and bad days. I have known for 15 months that our facility - the place I have called home for 14 years - is closing. Our parent company made the decision to consolidate manufacturing and we got the short end of the stick. Yes, this too shall pass...and what doesn't kill me makes me stronger. As H.R. it is very difficult to say goodbye to long time friends. I walk out of here for the last time JUN 19th. I hope your good days outnumber the bad, Kate. Your photos never fail to bring a smile to my heart.

Hopefully the weekend will brighten up for you.

Take care, raining for the 3rd day in a row here in MS with temps dropping. Stinky weather.

i wish i could help ... sending you hugs

Hi Kate, and here I was thinking that your job sounds so interesting. Oh, wait, compared to mine it is interesting. I am an admin. asst. for an accounting firm. Thanks so much for the lovely photos. Hang in there Kate.

To better days indeed - this comes from the UK with love.

Hi Kate, and here I was thinking that your job sounds so interesting. Oh, wait, compared to mine it is interesting. I am an admin. asst. for an accounting firm. Thanks so much for the lovely photos. Hang in there Kate.

I've always been a believer that if there were no bad days, I would not recognize the good ones. But you are having more than your share my friend. Not right. But as we all know. At some point it shall pass. Missing you and looking forward to my visit!

(Bet that cardinal sees his reflection and thinks it's another male rival. The house (converted into offices) our tech department is in had the same problem with a woodpecker. There's now lovely black flimsy cloth that moves with the slightest breeze hanging from their windows.)

I hope you have a nice weekend.

Reminded me of one of Don Williams' songs we heard just last month at a concert . . . "Lord, I Hope This Day is Good."

Yeah, sometimes it's just best to muscle through the day and start fresh in the morning. Love the cute little honey bee!

I recently discovered your blog through Fearless Nesting blog and absolutely love everything about it. you have a way with words, pictures, music, everything! you show us wonderful variety and precious meanings. You have a specialness (is that a word?)about you. Just wanted to say thank you for sharing and please keep posting. Pam

At Mary and Paul's Place said...

“There were people who went to sleep last night,
poor and rich and white and black,
but they will never wake again.

And those dead folks would give anything at all
for just five minutes of this weather
or ten minutes of plowing.

So you watch yourself about complaining.

What you're supposed to do
when you don't like a thing is change it.
If you can't change it,
change the way you think about it.”
― Maya Angelou

I have never liked the "endings" of things as compared to the "beginnings". The end of a school year is filled with forms, taking down beautiful bulletin boards, putting away all you have set up and getting everything up off of the floor so that the room can be thoroughly cleaned by the custodians, and worst of all -- saying good-bye to kids you really like who are moving on to a new school. Beginning a new school year, while a lot of work, means setting up the room for new adventures, unpacking brand new sparkly clean supplies, visits to the School Supply store and the 99‡ store for new "treasures", catching up with colleagues after a long summer, and greeting kids you haven't seen for awhile. No comparison, beginnings make me feel better no matter what else is going on in my life!!

I fear this could be the "Spring of our discontent".....I seem to be stringing up a few days in a row, also......somehow there is comfort in knowing that someone I admire and respect feels the same way.....sorry to take any pleasure in your discomfort.....yipes! I am turning into one of those people.......never mind......smiles!

I'm sorry it was such a bad day, Kate, and I hope you've had some good ones after that.

Definitely a stressful time of year if you are a teacher. I've got about one week left, and then a week of finals. It's stressful for the students too, which for me adds to my own. Luckily, things seem to be going a bit smoother this semester.

I hope your week gets better. Last week was not a good week for me either. I think it's the weather, up and down. I wish it would get get better. Have a good week, Monday will be a good one, I welcome another grandchild into the family.

Oh Kate, I hope that things are looking a little better for you! Maybe a weekend of sunny weather is helping? Wish I could help... (((Hugs))) for you, my friend. xoxo

I hope it was better. And I hope today is better, too. Hey, sometimes we all have to complain a little, blow off some steam. Or else our heads would pop. ;-)

Be real. No worries from your readers. I know I get concerned when you go for days without writing. I'd make you dinner if I could.

you can complain here or there or anywhere...and sometimes that's all we need....sometime to just listen to what's bothering us.....

so here are my ears, a cup of tea for the chilled evening and my shoulder if you should need that, too.....

We must walk through the valleys to appreciate the mountaintops.

I say bullshit. Still doesn't make the valleys suck like hell. I think I could appreciate the mountaintop just fine, thank you.

Love you and thinking of you.

Sorry you had a shit day! We all have those! Xo