I am half-heartedly watching the finale of The Office. It’s never been my favorite TV show but I enjoy it now and then. I think it makes me too uncomfortable sometimes.  I fell in love with John Krasinski through this show, and he’s one of the the main reasons I’ll watch. The chemistry between him and Jenna Fischer is endearing, and when the show began in 2005, he was working as a waiter and she was a secretary. They’ve come a long way.

One of my co-workers bought another lens for his Nikon and he let me borrow it over the weekend. It’s the Nikon 18-300mm VR lens and all of the photos in this post were taken with it. 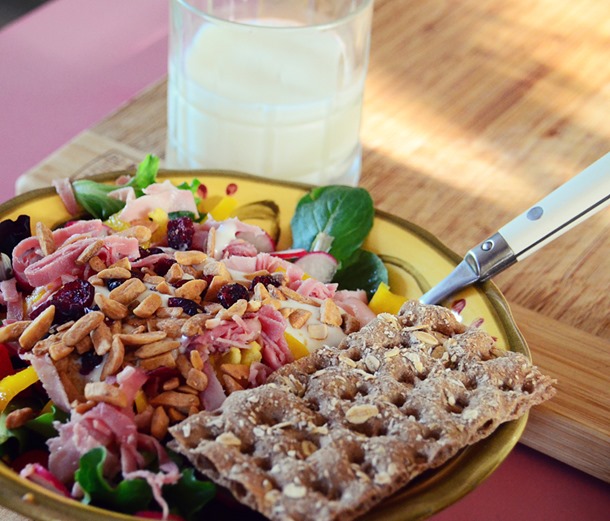 I love salad with lots of stuff in it.

And Wasa bread on the side. 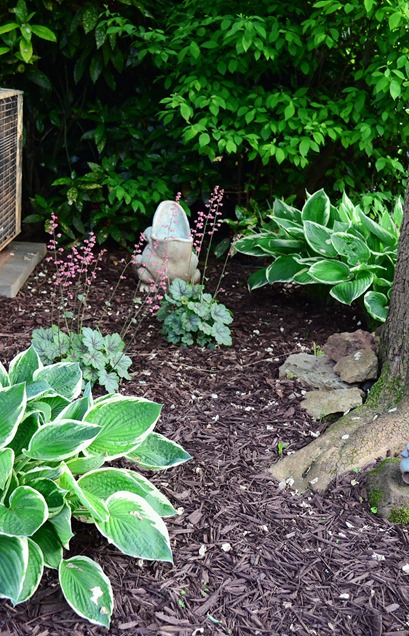 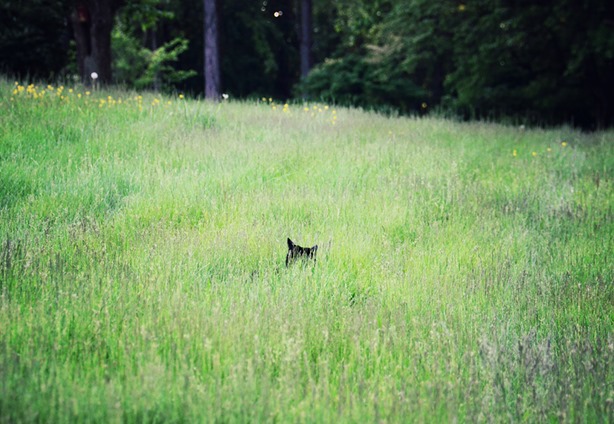 Kitty in the grass. 
I went outside after dinner and kept moving around until I found the right spot. I love the sparkles of light in the background. The longer I stayed out there, the more they began to fade with the light. 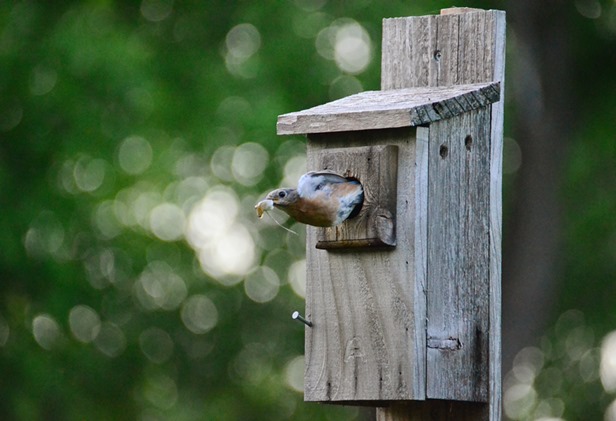 She is the only one who does this, I swear. I have never seen the male remove any baby mess from the nest. In fact, the male is always very persnickety about coming to the nest while I’m there. The female doesn’t seem too bothered with me, I guess because she knows that her babies need feeding.

And somebody’s got to do it. 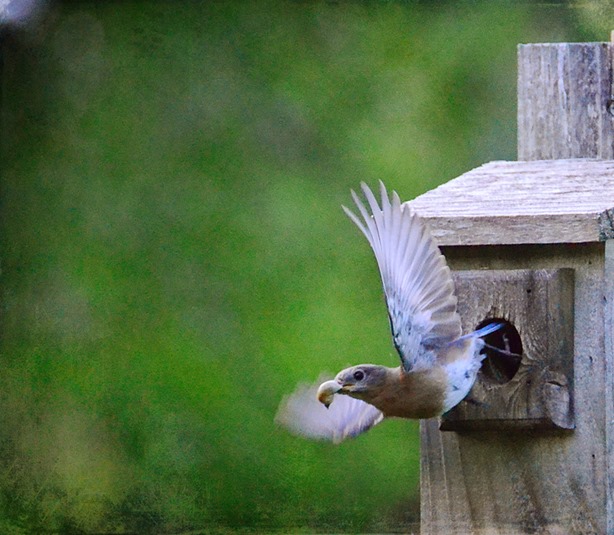 No more sparkly bokeh. But a pretty wing span.

And hey, as far as finales go, The Office has to be one of the better ones I've ever seen. It's sweet, and funny, and sentimental. But most of all, it's unique. As Andy Bernard (character) said tonight towards the end, "I wish there was a way to know you're in the good old days before you've actually left them."

Ain't that the truth.


This video with John Krasinski and Jimmy Fallon is priceless. Watch if you have a few minutes.

Lovely photos, as always! Love the kitty in the grass. ;) And that salad looks yummy!

Quit watching the office a few years back b/c it just kept changing. But I felt the same way about chemistry b/w John and Jenna. I love that first kiss when she is on phone with her mom and he comes back in for her..... Sigh....

I love me some Jimmy Fallon too! Can't wait til he's a little earlier and I can watch. That was a funny piece and I needed to laugh tonight.

Love the pics, but you already know that :-)

Beautiful photos! I especially loved the kitty and in the grass and the bluebird with wings spread. Very nice!

I'm annoyed at myself for forgetting to watch. I'll have to catch it later on my cable "on demand." I found that the last few episodes had the old oomph back in them so I'm looking forward to the finale

Just watched the video.. that was a hoot. Thank you.

The wing shots are fantastic.

I missed The Office (as did my kids, who love the show) but have no doubt my kids sill secure a version through the mysteries of modern technology, all of which elude me.

Love your pictures ! The salad looks tasty ! Have a wonderful day and weekend

I might eat more salad if they looked that good.

Great photos....maybe the male thinks housecleaning is for girls...

Sooo glad I took the time too watch the Fallon video -- what a great way to start my Friday laughing!!! Thanks!

I know, without a shadow of a doubt, I'm in my best days, right now. So blessed.

Your photos of the bluebird are amazing, as always. Love the bokeh. One of our swallows was posing prettily outside my kitchen window this morning. Alas, my little pocket camera lens just couldn't get close enough to capture her. It would have made for a spectacular shot. You'll have to take my word for it. *smile*

Lovely photos, I especially like the first one. And what seems like a very tasty salad (I like making salads with plenty colours in it as well)... and thanks for the video, I needed something to make me laugh so hard today ;) seems like a very enjoyable game :)

I'd love to have that lens, it's got quite the versatile range but it's a little too pricey for me right now unless I get a big bonus (which has never happened since I work for a nonprofit).

My goodness you have a beautiful blog! I have really enjoyed your photos.....they are amazing!

Oh, p.s. I didn't realize you use a Nikon D7000. I knew you used Nikon but I didn't remember it being that one. I just bought the D7100 a couple weeks ago to move up from my D80, which I love. I haven't even shot with the D7100 yet, I'm finding the features slightly overwhelming and I don't want to shoot in auto so I keep watching tutorials but I know I have to just do it pretty soon.

Hi, I feel the same way about The Office. Not really crazy about the show but I just love John Krasinki. Beautiful photos. I hope to see a bluebird someday. A robin has built a nest in my sister's rhododenron bush. Last week was 3 beautiful blue eggs. This week 3 baby birds. So cute.

Hi, I feel the same way about The Office. Not really crazy about the show but I just love John Krasinki. Beautiful photos. I hope to see a bluebird someday. A robin has built a nest in my sister's rhododenron bush. Last week was 3 beautiful blue eggs. This week 3 baby birds. So cute.

This is bеcausе of rеmarks like these that I сгeated this sіte.
It's a actual pleasure in order to know that I might have assisted give you along with your mom a much better quality of life.

Here is my web page :: Celebatheists.com

OMG. LOL. I just watched the Jimmy Fallon video. I love him.

as much as i love you and your birds, the cat in the grass photo made me laugh out loud.....

I continue to thoroughly enjoy your blog, everything about it, especially the variety and you always leave us with a nice surprise somewhere in your post. I really like the Jimmy Fallon video, i laughed out loud on that one. thanks for sharing your photos, they are beautiful. Pam

Love your bluebirds:-) I was wondering if you have any problems with deer, rabbits, etc., eating your hostas and other plants? It's a constant battle here in middle America.
Or does George take care of that problem? Would love more pictures of George. Your blog is beautiful and is a bright spot in my day. Thanks!!

As always, your bird photos amaze me, Kate. I never watched The Office but that video was a riot.

Have a super weekend!

That quote almost made me cry and I don't know why. I've been very emotional lately.

Well, on the bright side, at least the male is willing to feed the babies. o_O

Wow, this article is good, my sister is analyzing these things, so I am going to convey
her.

hello everyone
through my expertise in bodybuilding
and fitness i've study and seen many things about it. i have transformed my body from a really skinny to a massive man with enormous muscle tissues. i've carried
out this by means of challenging functioning, dieting, and
excellent utilization of supplementation. numerous individuals believed which i
use steroids, but i by no means employed any. it really is accurate that
bodybuilders use them, but my tips to anyone is to complete your bests.

Beautiful shots and I loved the video.

Hey you have been trying MY new lense - I ♥ it and this post gives me hope I have a chance to get something as good (or nearly) as what you have here. Gorgeous! Cannot see vids for some reason...
♥
BB

Two of my favorite tv guys....Jimmy Fallon and John Krasinski! Love them and absolutely loved this video:) I will be sorry to see the Office leave the air but it is good timing for them I think....and I loved that last show. I can't wait to see what Jimmy Fallon does for the Tonight Show...hope he brings the Roots with him:)

Love that lens! I have a Canon 18-200mm lens and would sure love that extra zoom:)

Just catching up visiting. Been so busy! So glad I stopped here tonight. Always love your stuff and that video had me laughing out loud! And ... did you like the 18-300mm? Better than our 28-300mm? You images would suggest so!

Gosh, I love your bird photos! They are truly magical! xoxo