Book Review: The Sense of Touch

I was contacted again by a representative of TLC Book Tours to write a review on a book of my choice from their upcoming selections. I chose a debut collection of stories entitled The Sense of Touch by author Ron Parsons.


From the jacket description: 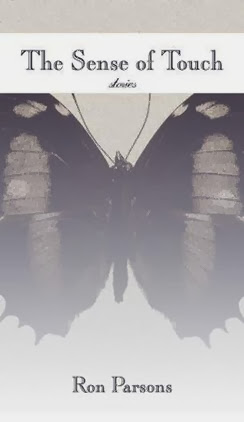 Sprung from the variously lush, rugged, and frozen emotional landscapes of the North Country, this luminous collection of stories captures the progress of a diverse ensemble of souls as they struggle to uncover themselves and negotiate a meaningful communion, of any kind, with the world around them. A brilliant but troubled Bangladeshi physics student searches for balance, acceptance, and his own extraordinary destiny after his father disappears. When a Halloween blizzard immobilizes Minneapolis, a young woman is forced to confront the snow-bound nature of her own relationships and emotions. During an excursion to an idyllic swimming hole hidden in the Black Hills, two old friends unexpectedly compete for the affections of an irresistible, though married, Lakota woman. Like  mystical expedition to reach the horizon of the quest to distill truth from the beauty around us, the revelation confirmed by these imaginative stories – elegant, sometimes jarring, always wonderfully absurd – is that the very act of reaching is itself a form of touch.

Let me preface this review by stating that I am a fan of short story collections. This one piqued my interest primarily due to the fact that all of the stories take place in the North Country and many of them promised to be full of cold and snow. I reasoned that this would make it a perfect book to read in the dead of winter, when my review was due.

I loved this description of bitter cold, from the nameless narrator of the title story, a freshman attending the University of Minnesota. He decided on the school which was 16 hours north of his home in Fort Worth, because he wanted to head north and was “thirsty for a clean break in a place where [he] didn’t own a wisp of history”:


I was ready for wind chill advisories and blizzard conditions. I wanted a sturdy, honest, decisive winter, where the air feels like a sharpened weapon, and everyone hides behind beards and scarves, ski masks even. Every now and then, we can all use the feeling of a long deadening freeze. It makes you appreciate the mercy of a thaw.

He quickly tires of the brutal winter, which he found out later was actually mild that year, much to his surprise. Not all of the stories revolve around harsh weather, however. In The Black Hills, the description of the secret swimming hole left me wanting to add it to my bucket list of places to visit in this lifetime.


They were relaxing at the top of a waterfall, in a small, still pool where the mountain waters hit an upward slope of folded granite. It was sort of a rounded bathtub, carved out of the rock throughout the centuries by the rushing river, a river so hidden that it was without a name. Just below were the falls, about a 30-foot drop into another much larger pool of clearest water that was gathered for a respite, a compromise in the river’s relentless schedule downward, between split-level decks of flat rock. It was a perfect place for sunbathing.

One of my favorite stories was also one of the shortest: As Her Heart Is Navigated. In it, a young woman named Haley discovers that her presumptive boyfriend, a young man who seems to have such a kind manner, has a violent streak. The city she lives in has been taken by a surprise storm that has dumped four feet of snow in a short time. While digging out her car which she had to park two blocks away, she discovers a house that has been drifted shut, and in it dwells an old woman who Haley ends up saving.

The characters in each of the eight stories in this book are diverse and interesting and the truth is that most of them are looking for a connection. I found Ron Parsons’ debut collection worth my time and am still thinking of some of the stories long after having read them. The writing flows with a certain grace and I say well done, Mr. Parsons. Well done.

Ron Parsons is a writer living in Sioux Falls. Born in Michigan and raised in South Dakota, he was inspired to begin writing fiction in Minneapolis while attending the University of Minnesota. His short stories have appeared in literary magazines and venues such as The Gettysburg Review, Indiana Review, The Briar Cliff Review, Flyway, Storyville, and The Onion.
The Sense of Touch, his debut collection of stories, was released by Aqueous Books in 2013.

Sounds like an interesting book Kate.
Thanks for reading it for us and telling us about it! A great review. Makes me want to track down a copy!

Have been enjoying some reading here lately, while not feeling so well.

I will have to request that one from the library!! Thanks.
Although I must admit I don't really want to think about snow.

what a good reviewer you are ... tho i am not at all a fan of short stories .. why you ask .. because i feel cheated i want a story i can get deeply involved in .. but thanks for the review

A good review. Sounds like a neat book to read.

Nice review, Kate. I want to locate the book and read it now! Hugs, Nellie

I really like short stories and that collection sounds right up my street. An excellent review.

Ooh, I love short stories... I'm adding this one to my wish list!

Great review, Kate! In fact, you've completely sold me on this book! I want to read it now...

ok I'm so going to read this book. I love short stories and this sounds like a good one.

I too love short story collections. I like longer books too, of course, but it takes skill to tell a encompassing story in a short format. While I don't really need to read a book to experience a fierce winter this year, I'm putting this one on my wish list. Thanks Kate! -Donalyn [http://thecreeksidecook.com]

I like short stories too and I think that may be why I still subscribe to the New Yorker...just to get my weekly story:)

Boy do these stories sound like the perfect reading for these snowy days!

You make me want to read this Kate!

I love stories that stick with me long after I've closed the book. I'm glad this book was like that for you!

Thanks for being on the tour!

Having read this I believed it was very enlightening. I appreciate you taking the time and energy to put this content together. I once again find myself spending a significant amount of time both reading and commenting. But so what, it was still worth it. watch Grudge Match online