An update on the hawks

Do you remember last week when I wrote that I had heard a hawk that kept on screeching? I had thought that since it was acting kind of strange, and it had landed along the fence line, that maybe it was my husband who was trying to tell me to come take pictures of the bluebirds. It was kind of a kooky theory, but that’s me sometimes.

There are two hawks, possibly three, and from what I’ve read and learned, they are fledglings. I believe their parents may still be feeding them because from what I’ve observed, they really don’t know how to hunt yet.

They fly from tree to tree around the property and screech. All day long. 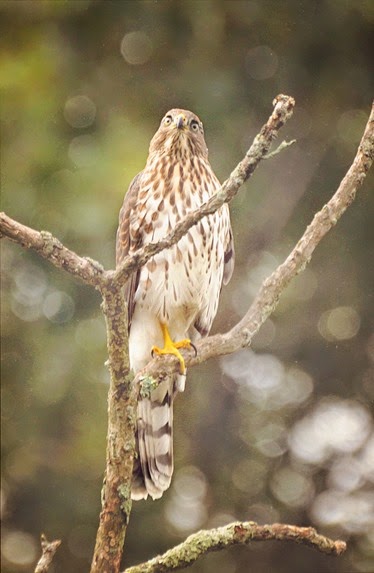 I believe they are Cooper’s Hawks. They are a little larger than the Sharp-Shinned Hawk and their tails are more round. I saw one of them in the dogwood tree while talking to my sister on the phone yesterday. I told her to hold on, I’d be right back. Then I grabbed the camera that happened to be sitting right there, and snapped the photo you see above.

You don’t hunt at the top of the dogwood tree with all the bird feeders down below and fully announce your position by screeching. So I know this bird is not hunting. He is calling out his location to his parents so that they can locate him for the next meal.

You birders out there ~ if I am mistaken, please let me know. I am trying to learn. 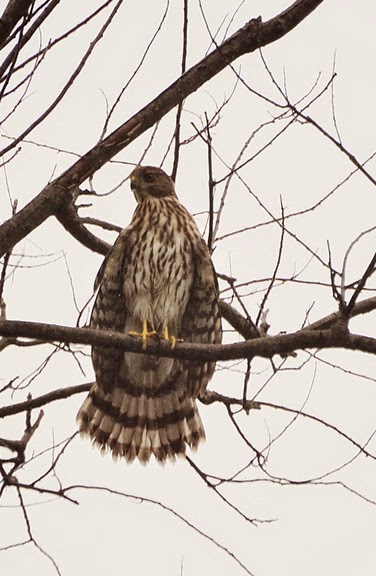 I found another doing this in one of the tall trees on the front yard.

I read online that the parents will teach their little ones to hunt, and will continue to bring them food until they learn to do it on their own. The female is bigger and, accordingly, is able to catch bigger prey for their youngsters. I thought the birds were calling to each other, saying “here I am” but I believe they are screeching so that their parents know where to find them with dinner. And lunch and breakfast and every snack in-between because this goes on all day long.

Could be worse, though. Could be dirt bikes. Or children screaming. Horns blaring. Guns going off. I’ll take this sound. 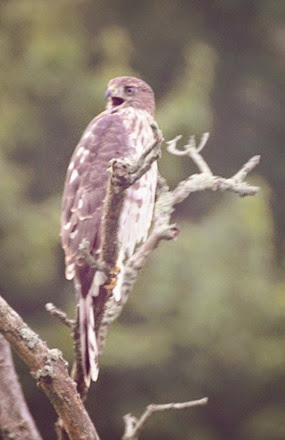 Another taken from the window – in the middle of a screech. 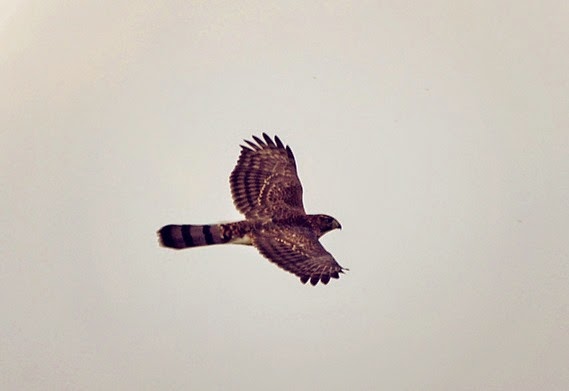 Last week, I saw four of them all flying together. Now I am assuming it was the parents and the two fledglings. They were high up. Maybe it was flight lessons . . . 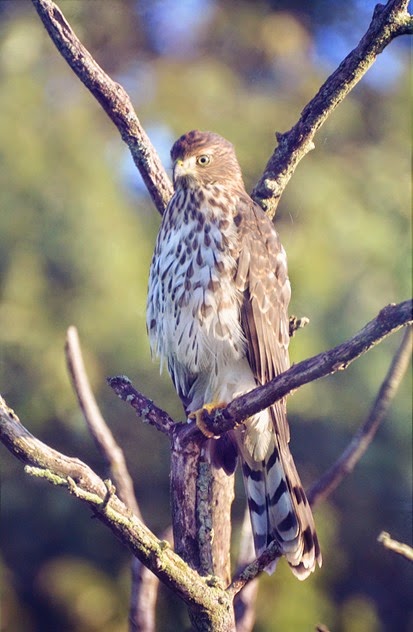 I took this before I left for work early this morning.

He was back in the dogwood tree doing his thing. 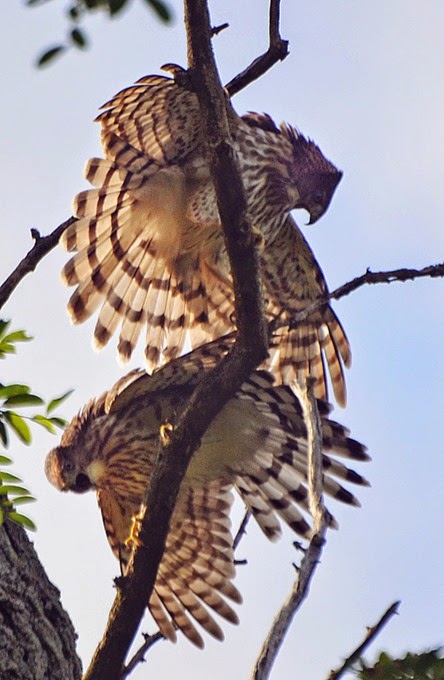 And then this afternoon before dinner, I heard them screeching in tandem and it seemed like it was coming from the same tree. This was different because they’re usually almost on opposite ends of the property. I am not sure if they are fighting each other or just tussling here. According to the Cornell Ornithology website, this aggression may be a way for them to hone their fighting skills. But if food is scarce, it may arise from competition for it.

They are still out there. Screeching. I’ll keep you posted . . .

I find bird behavior fascinating but I know very little. I wonder if you can ask these questions at your local Audubon Society?

What incredible photos you are getting whatever these youngsters are up to!

I'm with you Sweetie

Fascinating!! And i can attest to the fact that their screeches are better than children screaming and tires and engine revving as i listen to that every day..... Keep us posted! Hugs! deb

Amazing photographs, Kate! You have a real talent. xo Nellie

Oh my gosh, that is so cool... I can see how it could get annoying, too, but these are just great shots and that fledgling face is too funny!

That last photo is quite a catch!

Great photos (as always), Kate! We had a mated pair of Redtail Hawks a few years ago. We heard the same screeching. We came to the same conclusion that you did about feeding time. They also are very vocal when learning to fly; screeching while clinging to branch, flapping wings as if to say "ok, I'm gonna try this now", then after they jump/fall off branch more screeching "I'm falling! I'm falling!", then as they start to rise flying more screeching "I'm flying! I'm flying!". It's pretty funny to watch actually.

They look and sound like something we had invade our neighborhood two years ago ... they seemed to prey on small birds. They were terribly noisy and someone told me what they were but I can't remember ... sorry. (I live in Alberta Canada so possibly they are not the same.)

Our neighborhood Harris' Hawks are also very loud and it's such a strange, kind of unattractive sound they make. The odd thing is that every time the hawks are around, the mockingbirds follow them, chase them, dive bomb them, and the hawks never seem to go after them. In fact, they seem to get annoyed and try to get away from them. Maybe mockingbirds just don't taste good. And I hope hawks don't like the taste of hummers either.

Nice! I like your kooky fancy though. :D It's wonderful that you get to live in a part of the world where you can see these guys. I'm home in Oxfordshire for the summer and there was just a report here that the three breading pair of endangered red-tailed kites (a large hawk) have now multiplied into over a thousand in 20 years! That was good news for me. I love them. :D Happy bird watching Kate.

That last one is absolutely stunning Kate! You're sounding pretty good. I've been missing a lot of your posts recently due to STUFF. Glad to be back! x

Kate, these photos are wonderful. The crows and hawks seem to be having a screeching convention in my yard for the last month. It sure is noisy!

I am sure you are correct in your assumption that they are young Kate.
At least the noise will not go on for long - they will soon learn to hunt and then their parents will chase them away to find their own territory. Lovely photographs.

Fantastic photos and post ! We have a few Coopers Hawks hanging around in the valley , I hear one every day screaming in the woods . Last year they were in our yard not yet this years though ! Isn't nature wonderfully fascinating ? Thanks for sharing , have a good week !

awesome .. the 3rd photo looks as if he has HUGE talons but its only the tree branches ..

those young hawks must be related to my Harry who starts screeching for his dinner at 5 pm .. with a half hour to go before he gets fed .. and he does the same in the mornings .. tho recently his pal Jack has been coming into bed to wake me!!!!!

Those are seriously good photos! Wow, love them.

I have a wood inlay of a Coopers Hawk and find it stunning. Love the picture in flight, and the last one in your group especially.

you you you….are a bird whisperer!!!

you know that, right?

If you can, get binoculars and look at their legs. The babies are bright yellow.

Wow Kate, just wow! The eagles do the same thing here, yelling back and forth all day, we always joke and say they are talking to each other but maybe it is a way to have the parents find their young? Great images!!!

So cool! I would love to come for a cup of tea and a shooting session with you one day! ;) Nothing like inviting myself up...oh, and I totally get the thinking it was your husband thing too...only I think turtle sightings are my dad, lol.

They sure are beautiful birds, Kate.

We have lots of redtails here.. and I do love them, except when they grab one of my chickens.

Fabulous captures, Kate.I would agree with your assessment of these beauties. I hope they stick around for your enjoyment but not necessarily at the expense of your feeder visitors.

These photos are incredible!!! You are so talented!!!

We have Cooper's here too. They are so beautiful. I thought it was the Cooper's screeching all day, but when I went to the Audubon website, they sound more like a red-shouldered hawk. Check out the sound clips on these links. Also check out the fourth picture on the red-shouldered. I think that's a juvenile. The juvenile picture on the Cooper's hawk looks just like yours though, so I'm not sure which one it is by picture alone. Listening to the sounds is what helped me identify mine.

I've heard both calls so I know we have both here. I love hawks!!

Also if I'm not mistaken the red shouldered hawk is fairly large and the Cooper's is a lot smaller... I think.

Yep. It is a Cooper Hawk. They like to hang around bird feeders. Makes hunting smaller birds easier. We see them here in the winter when food is scare. Once in awhile one will show up in the summer. Love you photos of wild life. Thanks for sharing.

We have mostly red-tailed hawks...and he sits on his territorial wire, awaiting his prey. Always alone and I love him. My husband---who still has old farmer roots---wants him gone! I understand---but I feel the same tug toward the hawk, perched carefully on his usual wire---waiting....

Oh what great energy they must bring to your grounds. I would love hearing the screeching sounds, but like you would want to know what it all means! You have captured some truly magnificent shots.

Congrats on your POTW...this is great!

Very cool! I think your theory is spot on.

Congrats on the POTW award! Love your shots - they are awesome captures.

According to Ted Andrews in his book Animal Speak, when you see a hawk, it's a sign to pay attention. There is a message coming.

Don't know about hawk behaviour, but it sounds like you're right. I had some sparrows on my back deck and they were pecking around at bird seed that had fallen from the feeder. One of the birds kept feeding another. I assume it was an adult feeding a baby, but the baby was not in the nest! And it was feeding itself in between. WTH?

The only reason I mention this is that you thought the fledglings were not able to hunt as yet, and I think my little sparrows (or whatever they were) were just learning to feed themselves.
Nice to observe nature.