The flight home from Stockholm on Sunday was an uneventful one, which is always a good thing when it comes to air travel. I watched three movies on the plane: Jersey Boys, The Other Woman, and Million Dollar Arm. Liked all of them, too. During the drive home, traffic was horrible as I neared the Delaware Memorial Bridge on 295 and it was a slow crawl over it and on towards 95. I couldn’t wait to see my dog and was having trouble keeping my eyes open.

All of these images were taken using my phone and I’m posting them here because I can’t write and not have photos to share, you know. 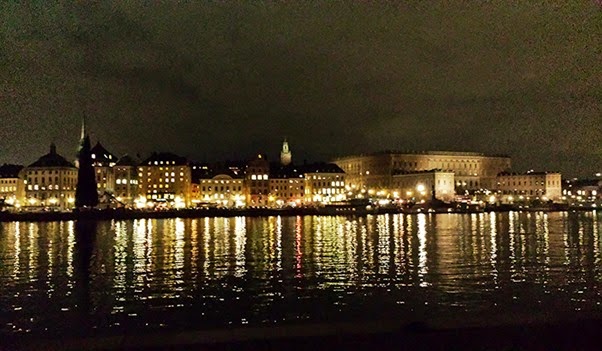 This was taken on one of my last nights there. I didn’t feel like lugging the big camera with me but when I came across this scene, I wished I had brought it. I took this and the image below using the ‘night portrait’ mode on my Samsung Galaxy S4 but I know my camera would have done it so much more justice. 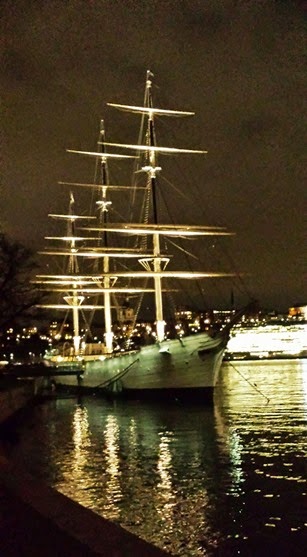 They were taken from Skeppsholmen, looking toward Gamla stan. We’d walked there from the city to visit Moderna Museet (Modern Museum) before dinner.

When I got home, a very excited pup ran to greet me. Oh my gosh – he was so happy I think he was crying. After much cuddling and then dragging the bags upstairs and unpacking, I took a good hard look at my beautiful dog and realized that he looked horrible.

His coat had been looking kind of dull to me lately and I upgraded his feed about 2-3 months ago because of it. I noticed little difference but something I began to notice shortly before I left was flaking skin in his fur. It was nothing too disconcerting, but when I got home, his fur was covered in flaking skin. So I called the vet the next day. I asked for blood work while there, thinking that maybe it was thyroid-related and I’m glad I did. George was diagnosed with seborrhea, which is easily fixed. But the blood work caught a disease called Ehrlichia canis, which is tick-borne. I had never heard of it but it was caught very early and the prognosis is very good. 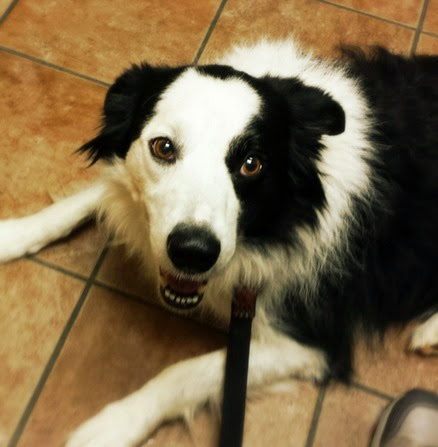 George at the vet.

He loves it there because everyone always makes such a big fuss over him. 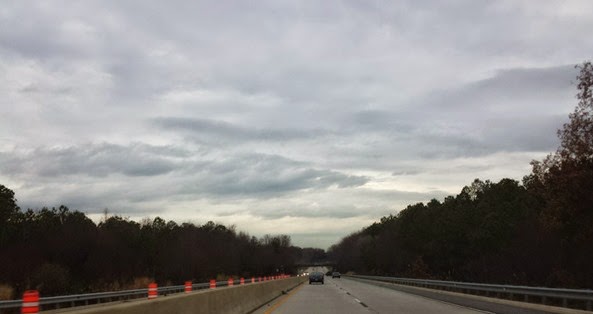 I nearly started crying when the bill was presented to me. He was due for a Lyme’s booster and his heartworm, but it was the medications that cost the most. I read on the internet after getting home that the pills George were given had risen in price over 6,000% since the year 2010. They cost $2 per pill, bring the price for those pills alone to nearly $250.

Christmas will definitely not be about presents this year. I’m just glad that my dog will be healthy. And that I asked for blood work. 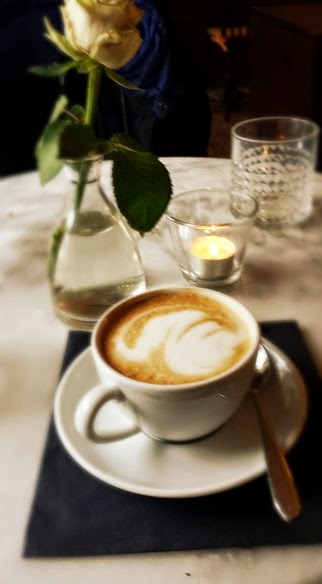 I think I am ruined for coffee after drinking all the deliciousness that Sweden had to offer.

But I will live ~

ps – Thank you for all of your wonderful comments on my posts while I was away. I have yet to read most of them, which is why you haven’t heard back from me personally yet. Until next time . . .

Your trip sounds wonderful! Sorry about George and the vet bill, though. I feel your pain there (refrigerator broke down, Son's tuition, I need a new car, etc.) and am hoping people will understand my need for a minimalist Christmas.

oh, I hear ya....money money......but it is always well spent when we spend it on our best friends ever.

Glad to see you arrived safely....and that George is a costly little guy.

Shared your excitement and joy in being reunited with dear George. And especially his joy! They do love us.
Ima pray for his health. . .


Glad you are home safe, my dear.

So glad you had a good trip! Enjoyed your posts from Stockholm.

So glad you're home safe and sound! Those last couple of photos you took in Sweden with your phone came out quite well in my opinion, they're beautiful!

Oh, that dog! Sorry to hear about George. I can't believe that handsome bugger actually likes going to the vet's, but then again when you're that handsome of course humans will spoil you! I would.

I'm glad you had a good vacation! Happy to have you back. :)

Glad you found the problem early. Sounds like a wonderful trip!

Having George around for longer is one of the best gifts you could give yourself, I think. ;-)

Oh, what a trip. Thanks for sharing all the wonderful posts and pictures.

Poor George and poor purse! I know the feeling. Heidi my Newfoundland has very itchy skin and has gone on a new drug called Apoquel. Because of her size each tablet costs £1.80. She has two of these a day and for the first fortnight she was on four! Yikes. But the love she gives is priceless, it just means I buy less junk that we didn't need in the first place. Glad you're home safe.
J. x

good to hear George will be okay .. those tick meds have always been exorbitant but $250 a pill is insane ... did you know Walmart has a pharmacy division that discounts animal meds and had free overnight shipping i wish i had known you needed meds for George .. vet offices mark up meds quite a bit .. when Rose was on an expensive med we bought it from Walmart for half what the vet charged .. there's also a pharmacy in Canada where we get Jack's asthma meds at half the price ...

So glad you are home safe and sound - if a bit poorer. We do what we have to do to keep those we love healthy and safe and move on. He's such a beautiful boy - most worthy of whatever needs be done. He will be with you healthy and happy for the holidays and that's important. ~chris

Glad you are home safe :) and Glad you got George checked out.

I think I am in love with Stockholm!

So glad you had such a wonderful time and a safe trip home. Sorry to hear George has some issues, hope he's back to normal soon and really what a great Christmas present to have him healthy and by your side. Hugs!!

So happy you had such a wonderful trip. I thoroughly enjoyed the pictures.

I am glad you made it home okay. Sorry to hear about George. Thank goodness for the blood work.

Vet bills can be so high.. and unexpected but we always fork it over because.. well because they're our sweeties. I'm glad it was something treatable and that it was caught early. Whew!

what a trip. what a life experience. what memories you'll always have!!!

and now here's an ear rub and a belly rub for sweet george…..xoxo

About George, I think it's also happening in every dog in the world. Sometimes there are seasons that some dogs can have that kind of condition. We have dogs here that's why I know!

The best flights are uneventful ones....

If I were you Kate I'd buy shares in the company producing the expensive dog medication.

What a wonderful time in Stockholm. Poor George, Glad you caught his illness early. It's always good to be back home and in your own bed. Nothing like the feeling of your own bed on a cold night. :)

Welcome home. Hopefully George will be back to himself soon. I have never heard of a dog who actually likes the vet office. You are lucky for that. Thanks for sharing your trip to Sweden. Have a good weekend.

Poor George, thank goodness it's easily cured (well, not easy on the wallet but easy in the long run). Your trip looked wonderful, I've read all the posts. What a fun thing to have done, congratulations on doing it.

Welcome home! Hope you had a great week getting back into the swing of things. Aww, poor George. Glad to hear there is a medication to help him.

Lovely photos ! Glad to see you had a safe trip home , oh I am so glad George was able to get treated with the pills and yes the meds from the vets are costly , The yearly booster we get for Miggs covers all to do with ticks as we live in the country I am surprised the booster there doesn't cover all to do with tics . It may of cost a lot but at least he will be ok and like us with our Miggs they are a important part of our family ! Thanks for sharing , Have a good week !