I used only the good notes

The holiday season used to be so joyful when I was young. I couldn’t imagine ever being sad during Christmas and the New Year. But then I became older and it wasn’t until after the children were grown and my husband became sick that I truly understood why people can become depressed at this time of year.

I had to force myself to put up the little tree this year but I’m glad I did now. I kept putting it off all morning and then finally, it clicked and it began to feel right. “Snap out of it,” I told myself in my best Cher impersonation. (Name that movie). And later in the day, I popped in one of my favorite Christmas movies, and I really began to feel better.

The Holiday, starring Kate Winslet, Jack Black, Jude Law, and Cameron Diaz is what I watched this evening. One of my favorite parts is the one with Jack Black, who writes musical scores for films, and Kate Winslet who is listening to one he’s just written for their new friend, 90-year old Arthur Abbott (played by Eli Wallach) . He’s also written one for her and he tells her that he’s used only the good notes. It’s very sweet. 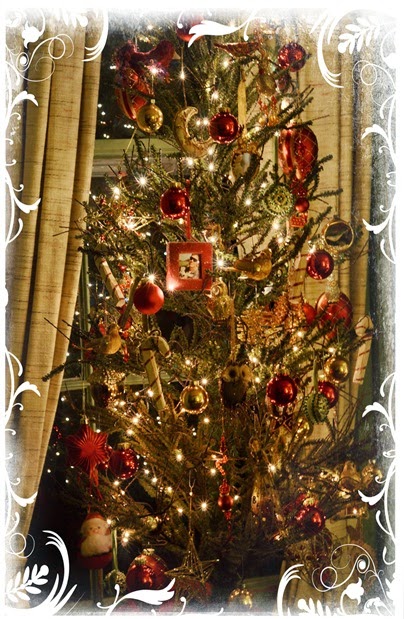 My tiny tree in the windowsill of the living room. Some day I’ll have a regular sized tree again. But for now, this one suits me just fine.

This year, my sons and I are doing something quite different for Christmas. We’re taking a trip to Florida to spend it with my in-laws in their new house down on the Gulf Coast. I am really looking forward to it.

What are your favorite holiday movies?

See you in the comments ~

I think it's a good idea to switch it up this year. Have a wonderful time.

Pam, I agree. We need a new classic.

Joyeux Noel and The Lady In White. They are different though. I understand completely about the holidays. I think going to Florida will be a wonderful way to spend Christmas. And Merry Christmas to you.

Any of the Hallmark station Christmas movies are great, but I think my all time favorite is "Sleepless in Seattle", it's kind of a Christmas movie. Love your tree!

Really pretty tree! I love 'The Holiday!' My favorites are Love Actually (this might actually be one of my favorite movies of all time), It's A Wonderful Life, and White Christmas. Hope you have a good week. : )

I'm wondering if we were watching The Holiday at the same time tonight?! I cry through most of it because the acting is so true, the story just perfect. I had an "Arthur" in my life, and my husband was a widower with two little boys when I met him. I once came upon him giving them a "shower", buck naked in the backyard...them not him! They were 2 and 3 years old (much like Olivia and Sophia).

Life is so filled with ups and downs. I lost my father right before Christmas 3 years ago. Yesteday we went up to our lakehouse to say our goodbyes to our friend and the man who built our house. We put one foot in front of the other. And we thank God for our blessings.

Love to you this holiday season, dear lady.

Papa and I feel the same just cant get into the spirit this year , Snow would help we are green and dreary . Lovely photo and tree, . Thanks for sharing , Have a good week !

i dont think i have a favorite Christmas movie .. in fact i dont really have a favorite movie oh sure there are some i like more than others but usually my favorite is the most recent one i watched!

Hooray for going to FL for Christmas .. tho i will miss our tradition i'll get over it, no need to slap me Cher!

Well done that girl, putting up the tree!
As to holiday movies - sorry but we tend to have a house full over Christmas and rarely watch television.

Beautiful tree. Oh and the movie reference...Moonstruck, one of my top 10 favorite movies.

My favorite Christmas movies...White Christmas, Miracle on 34th Street, the original of course.

Someone already named all the Christmas movies, but I really want to wish you a great Christmas in Florida! How fun to be there on the beach.

I think I still like Miracle on 34th St. the best. Your little tree looks so friendly in the window!!

Holiday Inn is my ALL time favorite!!

I know you will think me crazy, but I love the Nightmare Before Christmas - my son and I love Tim Burton. The movie is so sweet and has a happy ending and the songs are great.

Merry Christmas to you.

"Meet Me In St. Louis" - and please have yourself a merry little Christmas!

Well for me it's got to be The Holiday, The Homecoming, Santa Claus The Movie and The Christmas Box. By the way I've visited the pub featured in The Holiday. I believe I have been tapped on the shoulder by the ghost of Emma who was found bricked into the cellar after seemingly stumbling on smuggling activity. Scary or what!!
J. x

I'm so glad you found some Christmas Spirit. Since our children are grown and no little ones about we alternate fully decked out Christmas years with Scrooge years... With no little ones around i see no reason to force ourselves into Christmas if we are just not feeling it. And honestly it has made the years i do decorate all the more sweeter...

Favorite movies..... I haven't looked at what other people have mentioned yet. I'm curious if anyone has mentioned 'Courage Mountain' with a very young Charlie Sheen....LOVE this movie and it never fails to put me 'in the mood'....... even though the Christmas part doesn't come until the end...... Lets see what else... The 1951 version of 'The Christmas Carol' in my opinion is the best EVER....I cannot remember the actors name...shame on me... My favorite part is again the end when he wakes up happy and wants to spread Christmas cheer... his laughter is so contagious...it makes me laugh every time...His performance is the most believable performance i've ever seen for that movie. I STILL like the old Rudolph movies and the one with Snow MIser...you know where they look like puppets... My daughter grew up on them too....Well those are the ones i can think of right now..i'm sure there are more. Now i'm off to see what everyone else thought of... :) Hugs! deb

I'm glad you've come up with a plan for the holiday. It will do you all good to connect, I'm sure. The tree looks lovely. We've not done much more than that around here, either.

I have Netflix for the first time, so I'm enjoying movies that are all kind of new to me. Not all great.. but new. :)

I just moved from the Gulf Coast (Panama City) in July to the Upper Peninsula of Michigan... I'm wondering why a lot lately.

This is a difficult Christmas for us as well. I keep reminding myself that change can be a good thing.

I used to love all of the dysfunctional family holiday movies because they remind me so much of my own. Now... I tend to lean towards any movie with a dog as one of the main characters. Happy endings are a must. Any Hallmark movie.

... Or just gazing out the window at the ever evolving landscape.

White Christmas. Without a doubt, my favorite.

Love that you are shaking things up with a trip. Sounds like a new Christmas tradition. Enjoy

Wishing you a very Merry Christmas.

This has not been a particularly festive year for me. I'm not entirely sure why...foreshadowing..?

I have a few favourite Christmas movies, although I haven't watched any of them for several years.

I spent a warm Christmas in Australia one year. I thought it would be dismal, but it turned out to be one my favourite.

i love love love that you're traveling to florida for the holidays. make a sand angel for me, please :)

movies…
elf
love actually
the holiday
dang…what's that one with nicholas cage and tea leoni and their 2 little ones….love that one!!!

How jolly you have sweet plans for Christmas. Makes me glad to know. What a sparkly-fine little tree!
Many movies feature the holidays. The few Christmas scenes in Silver Linings Playbook take me back to Philly and childhood days. . . .

what wonderful plans for Christmas; I wish you a safe and happy trip. love the little tree, I put two fake poinsettia's on the table and hung wreaths at the driveway and barn.
Hey. We all do what we can do, eh?
Merry Christmas, God speed.

Hello Kate! So glad to hear that you are going to enjoy some time away in a (hopefully) sunnier place. I have enjoyed reading your posts for a few years now.
I've been watching movies on the Hallmark Channel lately. My favorite is "A Very Merry Mix-Up". In fact, I watched it twice!
Have a nice time with your son and your in-laws.
Merry Christmas!

I remember my grandmother and great aunts didn't like hearing Christmas carols, especially those created around WWII, during December. As I child I never understood their sadness at certain aspects of the holiday season, but age, experience and sadly, loss have now helped me to understand. Ignorance truly is bliss. I put the ornaments on my tree today after leaving it naked for over a week. It is actually beginning to feel a bit like Christmas around here...finally! ;)

Love Actually, it reminds me of my dear friend Dan, and gets me every single time I watch it!

Hi Kate, so glad to hear that you are going to Florida for Christmas. It will be a nice change. And the Gulf coast is so pretty. Cher in Moonstruck. Love that movie and love that line. I say it all the time. My favorite movies (in no particular order):
1. The Holiday - Kate Winslet
2. Holiday Affair - Robert Mitchum
3. Miracle on 34th Street - Maureen O'Hara
4. The Family Man - Nicolas Cage
5. House Without a Christmas Tree - Jason Robards (made for TV movie-excellent)
6. It's Wonderful Life
7. Elf - Will Ferrell, James Caan
8. Mary Tyler Moore and The Bob Newhart Christmas episodes.

I love The Holiday too.
Love Actually.
Have seen way too many kids Xmas movies to have a favourite there.
I see both my faves are everyone else's too!
Hugs from afar.
xxxx
BB