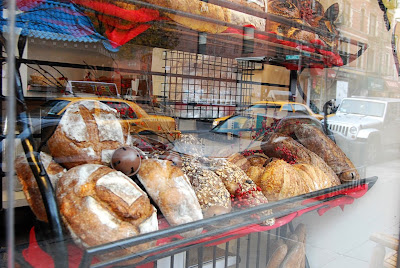 I had such a nice time on my visit to the Big City last weekend and just wanted to share some more photos with you. Click on photos to enlarge.

We stayed at an apartment in Greenwich Village that is leased by a relative of a friend. The relative was travelling and the apartment was available, so this was a huge plus. 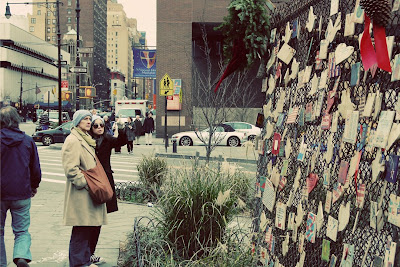 This is the memory wall I mentioned two posts down. My friends are shown here looking at it. On the right is Mary Ellen. She's a former student at our school and graduated the year before my eldest. It was her aunt who allowed us to use the apartment for the weekend.

On the left is our school's art teacher, Margie. She's been my friend ever since I started working there, ten long years ago. She taught art to both of my sons and while in upper school, my eldest chose to continue with the subject as an elective course for four years. It was Margie and her husband, Charles, that suggested that since my son was so interested in pursuing a degree in architecture, he should spend a day at a firm owned by a friend of theirs in Wilmington, DE. They contacted their friend and an invitation was issued. 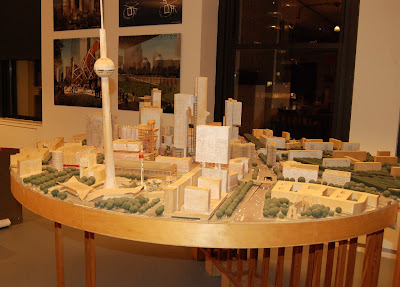 Spending that day working at that firm cemented my son's decision and we were so thankful to Margie and Charles for helping him. And while we were in the city, we went to visit my son. He was working on a deadline and could only get away for a short while, but he invited us up to tour the firm where he's employed.
We got to see all the models on display in the front lobby, and if I remember correctly, this is a model for the city of Berlin. But I could be mistaken because there was so much to look at. 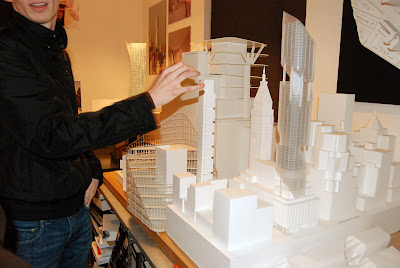 This one is a school and Mary Ellen was wondering how the children could learn to read, when they they can't even fit inside the building.
And my son explained that the center would have to be at least . . . three times larger for them to fit.
(This didn't really happen, but if you Name That Movie, you will have my undying respect. Really.) 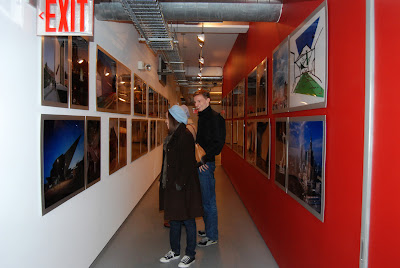 We received a wonderful tour from my son, who seemed to know what every photograph on this wall was and where the building was located.

Then we left and walked to one of his favorite restaurants and had a fantastic meal. We talked and laughed and it was great. 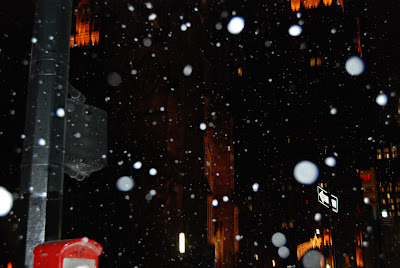 And when we left, we realized that it had begun to snow! The snow was laying on the pavement and swirling all around. It is so beautiful looking up into the sky and watching it fall. We walked him back to his building and stopped at Trinity Church along the way. I've got a picture of that up on my other blog today. 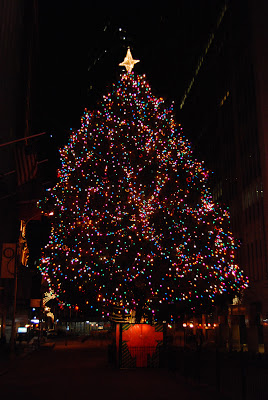 We passed the big Christmas Tree on Wall Street, all lit up in its holiday finery.


And I'll leave you with one final photo, and this is of my son and I at the restaurant. 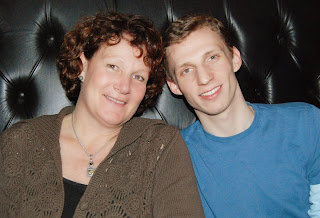 Wonderful pix of the city! And it even snowed on que for you! But my favorite is this last one of you and your son, looking so happy together!

Oh Kate! What a wonderful visit. And I love the last pic;) Next time, we have to get together.

What a handsome son he is too. You do have good looking men in your life, lucky thing!

Glad you had a wonderful day, you look happy in your picture. x

I love the pic of you and your son! What a wonderful time you had...I love that city.

Great photos - wonderful day. I love the shot of you and your son. Beautiful!

Looks like such a neat visit. Great to see a pic of you and your son.

I love all of your photos so who am I kidding. You have a handsome young man who I am sure loves his mother very much.

So glad you had a chance to spend time with your son! Its fun to see the NYC scenes....thanks for the tour!

Nice to see a face to go with the name....I've only seen you behind the camera lens!! Handsome son.....
It looks like he makes you very very happy.....Sue.

i love the photo of the bread! i think my mouth is watering!

So glad you had a wonderful time! And what a sweet photo of you and your son. :)
xoxo,
Mary

Char, you have my undying respect for guessing ZOOLANDER from that totally obscure little clue! We actually watched a good section of that movie while we were in NYC so I had to throw it in!

And thanks to all. Yeah, my son makes me happy. They both do!

wonderful photos thank you for the virtual tour ... LOVE the pic of you and your son its fantastic!

What a lovely photo of you and your son. Does he have a bit of a shine for Mary Ellen? That's quite a smile on his face in the photo of the two of them.....

The photo of the bakery with the reflected streetscape is great!

What a lovely post. I do love to see pics of NYC - we only see the worst side of it in UK and to see lovely trees = people enjoying themselves - shop windows etc. is lovely.

I can't believe you have actually revealed your total profile. The guessing of what you look like is not a guess any more. What a beautiful picture that is, and you look soooo happy. It is finally nice to put a face to the wonderful story teller. We can all see that you are an awesome mom just by the happiness that is shining though your smile and words that you write about your two boys.

Oh, gosh, I love New York City. I have always wanted to go there at Christmastime.

What a gorgeous picture of you and your son!

And anonymous, I can't believe I 'came out' either. I wasn't even drinking. (It was a week night. I have rules, you know, about drinking on weeknights.)

I've never been to New York but I imagine it looks beautiful at this time of year. Lovely pictures.

Great post - LOVE the pictures! Your son is soooo tall!! The big tree on Wall Street is wonderful. I would love to go to NYC someday - have that on my bucket list.

Terrific photos. Makes me really want to do a visit now. Love the photo with your son. I love my children as adults and watching them now with their little ones is delightful.

And do not believe MPM .. she says that ALL the time and gawd help her if she comes into meet you and doesnt call me to join ...

Handsome boy...you must be a very proud Mum!

A full picture of Kate!!! That's my favorite. But I love all your pics. It brings back so many good memories. There is no place on earth like Christmas in NYC.
So glad that you had a fun visit.
*hugs*

See? And now I've gone and forgotten the whole earlier post because I'm overwhelmed with seeing you there with your son. What a wonderful gift - to us!

Wow, what wonderful pics! It sounds like a great trip. Nice picture of you with your handsome son too!

That first photo is show-stopper ... but the last one is the best! ;-)

Mom sent these to me. My favorite is the one with the falling snow. It makes me happy inside. Also, to everyone who said they want to go to NYC during Christmastime, I suggest that when they do, they go ice skating in Rockefeller Center or Bryant Park. Rock is especially fun because of the tree in all its glory, and not to expensive. You can skate from 11-1 I think and rent skates for about 13 dollars. It's a lot of fun, even if you stink at ice skating like I do. It's fun looking at these pictures!
:) Sam-o