As my husband and I sat eating our dinner in the breakfast nook, we looked out the window at the rain. We’ve been getting a lot of it lately, but then it’s April and it’s not really a surprise. It’s supposed to rain in April. And this evening, it was coming down softly and steadily, making the earth lush with green. It was beautiful, actually, in this light. 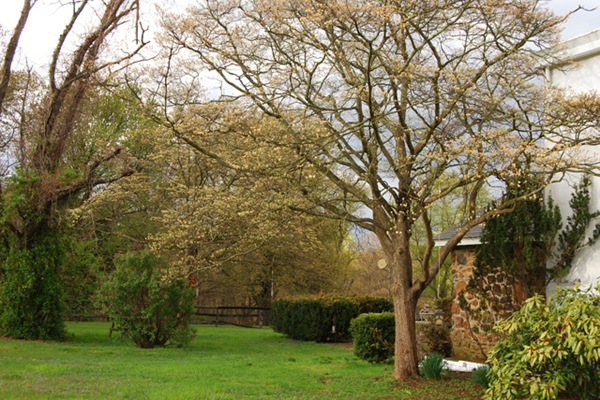 Just after dinner, my husband called me outside. It had stopped raining and the sun was peeking through the clouds, turning the world that lovely color that I love. I snapped this photo above from the back of the house. The dogwood is blooming and that stone wall is the breakfast nook. 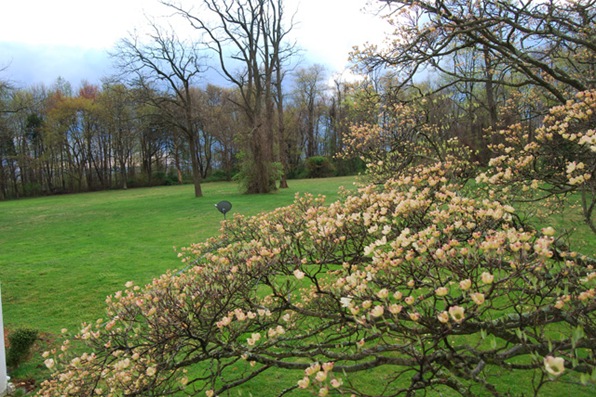 I shot this out the master bedroom window. These both are SOOC (straight out of camera). 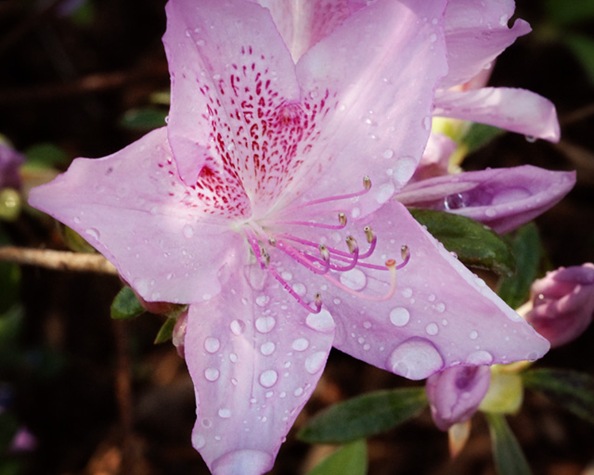 A beautiful azalea bloom from the bush out front. 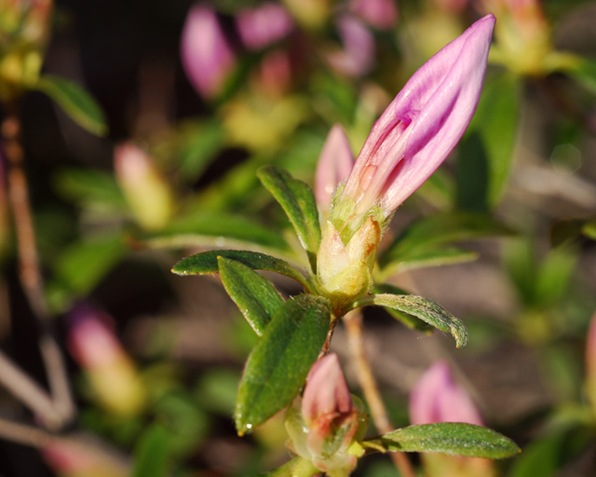 Here’s another bloom with the evening sun hitting it just right.

Thanks to all who enjoyed my day hike posts below. My husband and I used to hike and backpack all the time, and once took our boys on a three-day trek through the backcountry at Shenandoah. They were middle-school aged at the time and I think they really liked it, although it was hard work. My husband also took each of them separately on backpacking adventures.

And speaking of sons, I’m glad because my eldest is coming to visit this weekend from the Big City. We’re having an Alumni Banquet and a feature this year is a tour of the old school campus, which should be pretty interesting. The campus was moved to its present location in the 1970’s but back in the early 1900’s, it was one of the premier academic establishments on the east coast and the tree lined streets of the campus were designed by Frederick Law Olmstead. Mr. Olmstead was known as the father of American landscape architecture and was famous for his design of many urban parks, most notably Central Park and Prospect Park in New York City.

Ok. I have a rule about not talking about where I work, so I’ll stop now. 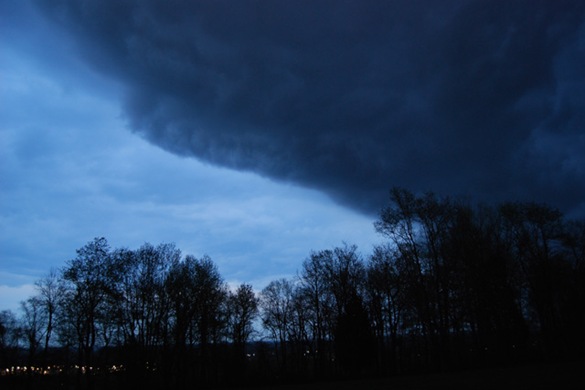 Last night we had a wicked little storm blow in. I took this photo off the front porch when my husband called me and told me to bring the camera. These are both SOOC as well. 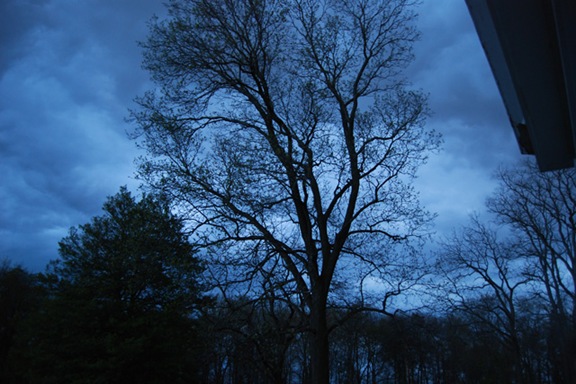 I’ve never known George to be afraid during storms, but last night, for some reason, he was scared out of his gourd. He wouldn’t leave my side, hiding under my legs, burrowing into me while I sat on the couch; why the poor dog was just a mess. Luckily it was over quickly.

Hope you all have a great day. And until tomorrow then, my friends . . .

Lovely photos. I'm a VA neighbor, and we've been poured upon as well--no complaints, though--we need the rain before the well runs dry. :) I've just stumbled upon your blog and really enjoy it.

gorgeous shots....I love how the storm can bring such beauty. thank you for sharing the beauty of your world. I so admire your photography.

love the yard and raindrops on the azalea. what fun and good quality time you shared with your sons.

Very nice photos. Your place is so beautiful and serene.

I love storms but my malamute, Wolf, does not. He lets me know they're on the way by trying to hide behind me, under the kitchen table or in my closet and that's not easy for a 100 lb plus dog to do. Definitely does not like thunder or fireworks but my shepherd mix, Angel, doesn't seem to mind. I love those photos..so dramatic.

It's a small world, or Frederick Law Olmstead got around...I worked with one of his descendents and he laid out one of the neighborhoods here in Atlanta which featured lovely green spaces.

Lovely photos - I'm finding that just before and just after a rain is my favorite time to photograph.

Kate, these are the most beautiful photos I think you have ever posted. I know just the color you are talking about after the rain. It is so gorgeous and it is a color you can never really capture or explain.

The storm pics are magnificant! Oh that color!!!!

kate i think the pink blossoms are so magical how vibrant! after a rain so fresh...Sam is storm phobic we have to medicate him ...that is why his owners gave him up!

Those are quite the storm clouds and almost look as though a tornado may have been brewing... George may have sensed that which would account for his fear.

Wet weather brings out the very best in colors. Plus there is that wonderful glisten that comes from drops clinging to everything. Your florals are great! And, I like spooky looking storms as long as they don't come too close.

Lovely photos. Poor George...at least he had his mama!

Your dogwood is marvelous! Mine died a few years ago. I need to plant another since I miss it so.

Beautiful photos Kate. The azalea is lovely and I've never seen one that color. Is it a purple/pink? Gorgeous.

Boy that does look like a nasty storm that came through. I see why George was scared. Looks as if a tornado might have been in that one.

Oh those pictures are absolutely beautiful! Thanks for sharing- I love pictures! Doesn't the air smell wonderful after it rains? :D
Courtney

I think our dogs know just when to be scared. Chloe isn't scared of storms either - but in February a tornadic storm hit about 10 miles north of us and she just wanted to sit on my lap the whole time. Since she's not really lap-dog size (hee hee) I'm not looking forward to storm season!

No wonder George was scared - that was one ominous sky! Wonderful shots, as usual.

Beautiful shots as always...Dora hated our storm last night, too.

Gorgeous dogwood! Stunning cloud bank! Send some rain back west....we've missed out on those April showers.

After a rain is such a lovely time; the smell of the thirsty earth being sated, the colors of the atmosphere... all are beautiful creations of the Creator.

I love the last scary tree pic as I have many of those as well!

Very nice property, you are so lucky to live in such a beautiful place.

Char, I consider that a high compliment coming from a photographer such as yourself.
Willow, I've gotta check out that photo. And btw, your little icon pic is creepy, man. It feels like Chucky is staring at me, ya know? Ha!
Thanks all, your comments are always welcome. And to Rich, yes that's the satellite dish. I was going to Photoshop it out but I thought, who cares? "Love"!!

Still waiting for our dogwoods to bloom. So in the mean time, I'll enjoy yours.

Poor George - even tough guys can get afraid.

I'm with George, that's a wicked looking storm! Actually, I love storms... but we had an Australian Shepherd that was completely undone by storms and used to wiggle under the bed at night and tremble so much the whole bed would shake. Once our youngest son came along, he too was afraid of storms, so the dog would go get in bed with him and they both felt better.

Don't you love when a front comes through? There's such definition in the sky. The good. The bad. The hot. The cold. On. Off.
does that make sense?

Those clouds blowing up...oh, I wish I could have been there.

As always, great photos! Your posts have such a peaceful quality to me... Even the storm pictures. Those are very dramatic. I love a storm so I was thrilled to see those!

Oh how did I miss this post? Beautiful photos, Kate, as usual. Enjoy your weekend with your son; mine is home this weekend, too. :)
xoxo,
Mary

Beautiful photos as always, Kate. I love the rain drops on the pink petals and the stormy night best of all.