It’s early morning as I write this and it’s been raining all night. It’s a good day to curl up with a cup of tea and a book. Or a cup of coffee and my laptop, which is what I’m doing this morning. 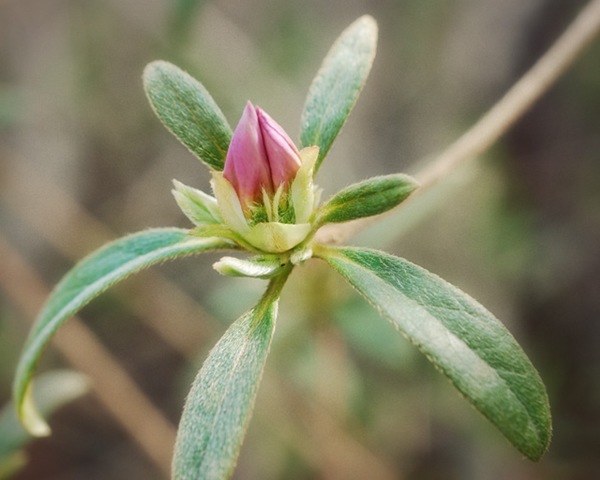 I took these photos from the front porch yesterday. There’s a huge bush on the one side of the porch and a smaller one on the other. We had no idea what these bushes were until yesterday when we noticed a couple of blooms in the back. We think they’re azalea bushes, which is pretty exciting because I’ve never had one of these at any of the places I’ve ever lived. In my life. 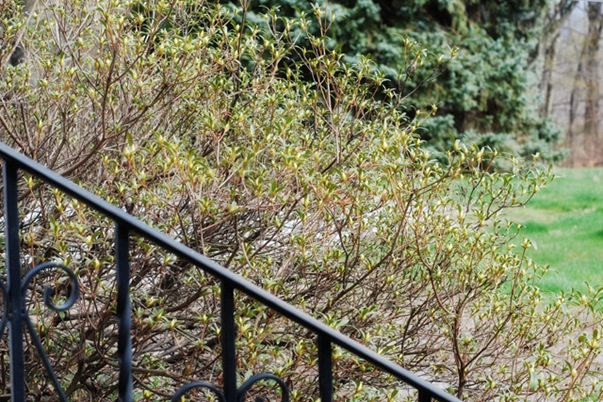 In other news, we think that the foxes have moved on. There’s no evidence that they’re going in or out of the dens we found at the end of winter. It’s probably because George is always sniffing around and because we spend so much time outside walking the property. The previous owners told us that they saw fox cubs in the Spring, so we’re still hoping. 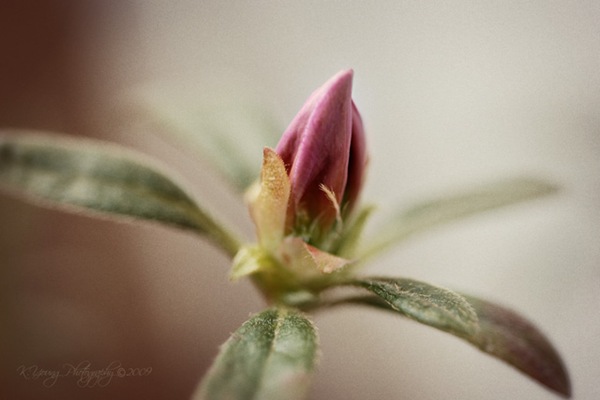 My husband and I talked yesterday about maybe taking that road trip after all, and visiting places along the way. We’d take our camping supplies and set up at a campsite each evening. Hmmm. You know, I thought about that for a moment or even two moments and then realized that after driving all day, the last thing I want to do is to set up camp and build a fire.

But if this is something that he wants to do, well maybe I should just bite the bullet and do it. We’ll see. I don’t mean to be this ambivalent, but it’s a rainy day. And I can be whatever I want.

Lay back and groove on a rainy day.

Spring is so full of surprises in a new home! Who knows what lurks in the flower beds and among the trees and shrubs.

I love azaleas. Unfortunately, so do the rabbits that live under my porch. Suffice it to say that we won't be enjoying any azaleas this spring. None at all!

Camping!!! Oh you adventurous lady. The things we do for our men.

It could be azaleas, but the leaves look fuzzy. The flowers look right.

If it's raining, go to wunderground.com and look at the forecast maps where you're going. The last thing either of you need is to be driving and setting up tents in the rain for days on end.

Tent camping? Why not rent an RV and sleep in a bed? Just a thought.

Love the azaleas. Mine are almost full bloom now. Camping, hmmm. We used to do week long family vacations camping when I was a kid. Tents and cooking on the open fire. Mother was a wiz on the open stove. We, The Hubby and I, did a lot too then bought a camper but when we got the cabin I put my foot down. That was the end of my camping. Have a good day.

definitely a variety of azealas or rhoden....however you spell that. it rained all night here too. the sounds of thunder and rain cradled us for a while. but today is fresh and clean.

This takes me back to our first spring in our new home. Daffodils, tulips, lilies of the valley, green onions, and rhubarb...all that in our little city yard. No foxes here, just wild bunnies!

Beautiful photos of what I think are azaleas too...pitching a tent sounded like a lot more fun 30 years ago than it does now:)...have fun whatever you decide to do!

I would most love to go from campsite to campsite and pitch a tent and do the fire thing! I think it's a great little vacation but it can be tiresome... but oh so worth it! But I definitely would bring my fly rod and hope it's by a beautiful lake or stream so I get a chance to so fight some fish!

I just came by after visiting Hilary's blog. I love your new book cover design.

Question: What do you call a grey, misty, rainy weekend in Vancouver?

For as long as I can remember, the kids have had their Easter egg hunt in the rain. *sigh* I love the rain, but ...

I love outdoor camping, but only if we have to set the tent up once, and stay in one spot. Every night might get to be a bit much, but on the other hand, you might enjoy the adventure. Give it a try, anyway. :-)

The closest I get to caming was in our RV.
Good luck and have fun on your adventure, but know this, it is an especially wet time of year to be sleeping on the soggy ground!!

Hi Kate, your photos are amazing. Can you share some of your photo taking secrets? What makes your photos stand out?

Hey, thanks all. And I'm not so sure about the sleeping on the ground thing. Flea, thanks so much for the advice. I know. It's the last thing we need.
Cindy, I don't fully understand what you mean. I do use Photoshop and used it for these photos. I'm an action freak. An action is a one-button concentration of a number of treatments to a picture. I learned a lot on Pioneer Woman's site. www.thepioneerwoman.com. Click on her Photography tab. And begin your journey . . .

Rainy here too .. hopefully tomorrow will be nicer ..

As for camping .. I only rough it so far, which means a Comfort or Quality Inn vs The Four Seasons ... ;-)

Kate, it rained big time here, and hailed, and the tornado siren went off at least four times. However, today is absolutely sunny and fresh and almost warm! I am not sure where on the Gulf Coast you are headed, but just know that my town is off I-85 between Atlanta and Montgomery. We are about three and half hours from the coast. There is a great state park here with some cabins and campgrounds! Where ever you travel, God speed and have fun.

That looks like a very old azalea. Feed it some Holly Tone or Miracid--especially in this rain. And camping? My idea of camping is a Holiday Inn without a bar in the lobby;) Happy Easter my friend;)

My idea of camping is room service. But then I know what you mean.
Brenda

Your discussion with your husband sounds like something that could transpire between me and mine. No hot shower in the room next to my comfortable bed with flannel sheets and lots of covers? PLEASE forget about it!

A good Easter to you, my friend.

...Don't ya just love rainy mornings especially when there's nothing pressing, no place you have to be and you can just relax and watch it rain...

...You know it will probably do you both good to get out and get some fresh air and a change of scenery and maybe it'll give you a fresh perspective. Sometimes the very thing you're dreading turns out to be just what you needed...you just never know... :o)

...I hope by the time you read this that your Saturday was a good one Kate! Here's wishing you and yours a blessed Easter! :o)

Gorgeous photos Kate! Good luck if you decide to go camping. You have a lot more guts than me! Guess I'm lazy and probably do miss out on the beauty of the outdoors and nature. Good luck and I look forward to your photos if you do decide to go!

I love spring and you are capturing the spring in your area perfectly...really wonderful photos. Can't wait to see all those blooms in full bloom. Happy Easter!!!

Grab hold a every opportunity you have. You can always sleep and shower later. Enjoy, dreamy rainy one.