After running some errands this chilly morning, I packed a lunch and we headed south to a state park we like to visit that’s on the water. 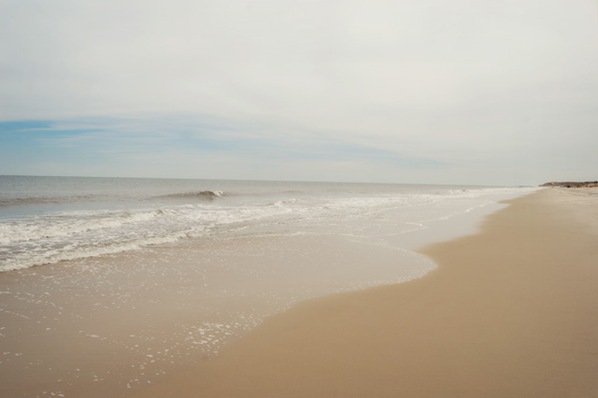 When we began to walk on the beach, the scent of the ocean took me back to my childhood and suddenly I felt elated. I grew up on the Jersey shore and as a child, spent many of my days at the beach. 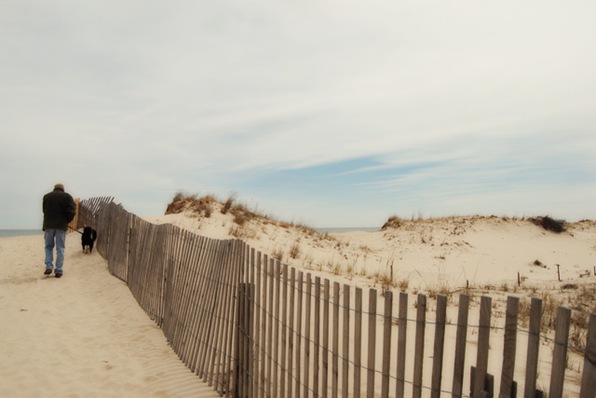 Here’s another photo of my husband’s  back. I’ve said it before and I’ll say it again that I really should do a photo book of all the pictures I’ve taken like this. Here’s what he has to say on the subject.

My elation didn’t last, however. So many of the trails had new signs posted that stated “no dogs allowed on trail”. So unfortunately, we left and headed a little bit north to Prime Hook Wildlife Sanctuary where I took the photo below.

Sometimes life is hard for some people and it’s difficult to face yet another day. Especially for a man who doesn’t know how to define himself anymore. Have you ever noticed that a man defines himself by what he does for a living? Sometimes I don’t know what to do to help. Sometimes I just want to give up and run away. 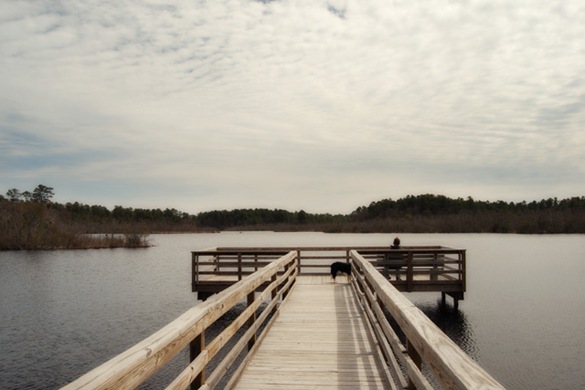 But then I get over it. And life goes on. A friend’s blog today said that she was making lemonade after life gave her so many lemons. And that’s exactly what I think I’ve been doing. I just get tired of drinking so much lemonade.

And I am NOT switching to vodka, either!!

This too shall pass, my friends. So until tomorrow, then . . .

My husband had a liver transplant 15 years ago.......for a few years afterwards, he did very little. then he decided to run for County Supervisor. He lost the first time. but he persisted, and the second time he ran, he won. He has served 5 terms so far, and is running again in Nov.....it gave him back his life, and he LOVES what he does. He is the only honest politician I know. Maybe your husband will "redefine" himself. I feel your pain.

Bless your heart for keeping the strength and love you are giving him. I know it is so hard for him but it equally hard for you....just in a different way. Take heart Kate for when those discouraging moments come, know that you have many many souls lifting you up and your eye for beauty in photos always can make my days better. Hugs and faith.

Lovely pictures. I do miss the beach, my parents used to live there so I went often. Now I rarely do.
I think change is hard for anyone. I worry about my father, who after working hard his whole life, was forced to retire in the last year year due to knee injuries. I'm sure that in some ways, it's great to be retired, but I worry that he is bored or feeling unproductive. I want him to still have hobbies and interests, and not waste away being a couch potato. Not that he is! He keeps himself quite busy. I just worry about him.
Hang in there!

...And I know he appreciates every little thing you do. He just may not say it. I will always swear it is just as hard to be the caregiver. If not harder. Beautiful shots--no surprise there;)

You husband can define his life as being a husband and father. Because no matter what he does (or did) for a job, being husband and father are by far the most important. I know, he can be a photographer's back model for his job. He does it quite well!

The beach looks so lonely this time of year. And you captured that solace and quiet so well.

It's a difficult place you guys find yourselves. Sometimes you're each in your own place trying to figure things out, and sometimes you're together. I'd think those together times help define things a little better. Hang in there 'til it does pass and enjoy that breeze. Beautiful day, it looks like.

I'm so sorry. I don't mean to be a crybaby. Sometimes I'm much stronger than I think and others, not so much.
I don't think I'd be as good if it weren't for this blog, and you. And I thank you.
Some days are just better than others, that's all.

I'd give you a big hug if I could! There comes a times when being strong just becomes overwhelming and you need to rest and just be weak for a little while. Embrace the weakness, share it with us, and you will come back stronger than before and ready to go on fighting. I have only been reading your blog for a short time, but I can tell that you and your husband are both fighters. The two of you together will make it through this.

Oh, and I forgot to say that I very much enjoyed the pics of your trip. Thank you for sharing it with us.

Lovely photos. And I'm thinking of you, my friend. You'll always take care of him, just dont' forget to take care of YOU!

Don't have to switch to vodka, just add a little splash now and then to spice up that lemonade ;o)

Beautiful pics..as always. Oh, I totally ordered that Valentine's photo of yours on Etsy. I've been slobbering over it for weeks!

That is all we can do Kate. Enjoy the life that we have, every moment of it.

Oh that horizon line of water is so, so beautiful. I miss living on the edge of a continent. Staring at water makes you feel so small but also so connected with absolutely everything. Thank you for posting that first photo.

There are a lot of complex everchanging emotions going on between the two of you but it will all work out, things always do. Besides, you have that box of compliments handy when you need them, right? :-)

you both have had a great loss...now you are learning how to go on. so many things happen in our lifes that shake us to our core. how do we pick ourself up? one day at a time, right? i hope you will always be honest with your feelings 'cuz i always find comfort in them.
bv

LOL I like the vodka quote too. These are just gorgeous shots. As my mother was ill there were many days we worked really hard to squeeze out a bit of juice from those sucky lemons. I know at times its more difficult than others. But..anytime I can help...let me know. I have wide shoulders and a listening ear.

Then how about lemoncello lemonade...I have a great recipe.

Will your hubby be able to go back to work?

So many kind comments this morning and I thank you. It's raining here, just like it forecast and this is why we're leaving later in the week!
Noble Pig, no. He will never work again. Disability payments begin next month. And what's worse is that he thought he could cut the grass on this property and now I don't even think he'll be able to do that. The vibrations bother his head. He enjoys gardening and he's been great with the laundry (to an extent!) and I'm going to stop now. I hate cancer and I want to kick its ass.

Kate, I can not say I know what you are going through but I share some of your pain watching a love one fight cancer. My beautiful Step-Mother has been fighting Breast cancer for five years and is starting her 4th round of chemo.

Our recent cruise was a wake up call for me as to how weak and helpless she feels. They live on 50 acres and have always had a big family Easter Egg hunt, even for the adults. They could not do it this year and it just broke her heart.

I do thank God for each day that she is with us. I admire her courage to continue to fight this horrible cancer. She lives each day to the best.

My God wrap his arms around you and your husband and hold you in his embrace.

And no you are not whinning. It is good to have a place and people to share your feelings with. Thanks you for your honesty.

I love that last photo. Adore it!

I'm so sorry that you guys are having such a rough time. Cancer does suck. A lot.

You are right that men seem to define themselves by their job. I hope your dh can find a hobby or something that will fulfill some of that for him. Maybe woodworking or something. If he could get into something where he creates something, maybe that would help. Oh, I'm not much help. Just want you to know that you're in my thoughts...and I think you're handling the whole situation remarkable well.

What you said is so true. Men DO define themselves by what they do for a living. When they no longer have that in their lives, they become weak and their self esteem goes out the window.
How can we help those that we love? We, the stronger sex, must do what we can to stroke that ego. I know from personal experiences, that this is a tiring process. So I turn to my faith for my strength. It is all we can do.
And learn to love lemonaid! Sending you a virtual hug!

For many years on his birthday and on New Year's Husband would give me an accounting of our life that year to date ... it was beyond depressing because he was trying to get his business up and running and so HE wasnt being the breadwinner ... finally I got tired of it and told him he had to stop that it was just not healthy.

I believe men feel less when they are not earning the big $$$ ... there is SO much more to life than whose check is paying the bills .. I hope you can get him to see that.

I'm just doing some catching up here at your blog and stopped to look at the beautiful pictures of the seaside (gorgeous colors!)...when I was captured by your writing...it is good to have a place to express these feelings and you do it so well...Hugs to you...and I agree that a splash of vodka in that lemonade now and then is quite therapeutic!...My sister is battling stage 4 lung cancer and it has turned our lives topsy turvy too...but it has made us stop and spend more time together...my lemonade!