I know. It’s been two weeks since I returned from my trip to Maine, yet I still speak of it.

As many of you know, the park was in the news lately after Hurricane Bill passed by the island on its way east and out to sea. This past Sunday, 10,000 spectators descended on the park to witness the spectacle of giant powerful waves crashing against the rocky coastline. And tragically, despite repeated warnings from park officials, 20 people were swept out to sea and a 7-year-old girl died. Several people were hospitalized with injuries including broken bones from being slammed into the rocks.

But two weeks before this, things were quiet on Mt. Desert Island. It was a beautiful, if somewhat cloudy summer day. And my husband and I, along with George, our border collie, hiked along the Great Head Trail. 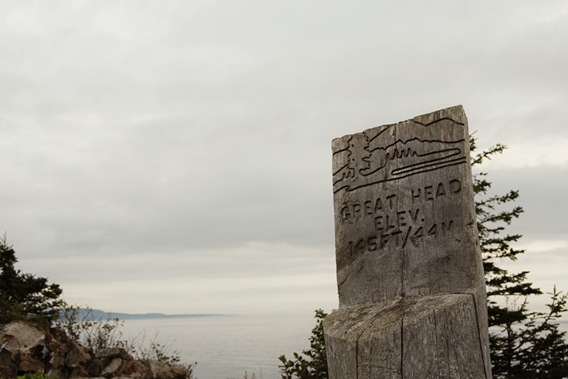 This is a trail that I highly recommend. It’s not too difficult for the whole family to do and there are wonderful views of the water. You can pick up the trail at the eastern edge of Sand Beach. 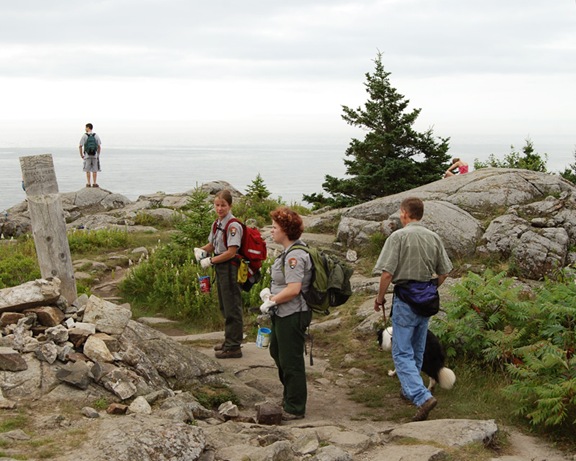 I’ve been hiking on marked trails all my life, yet this is the first time I’ve ever seen the trail marking done in person. See the two rangers with the paint cans in the photo above? 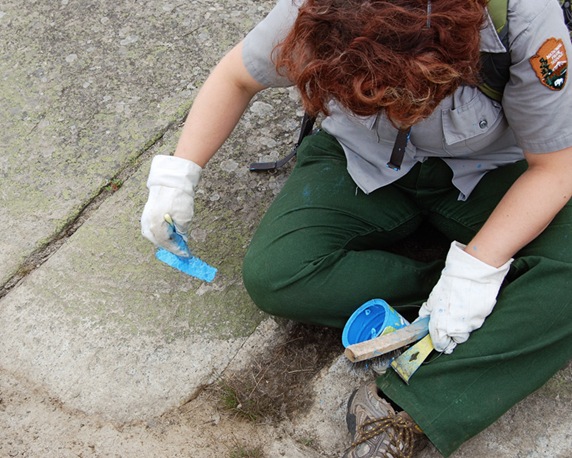 The trail markers guide you over the boulders, keeping you going the right way. 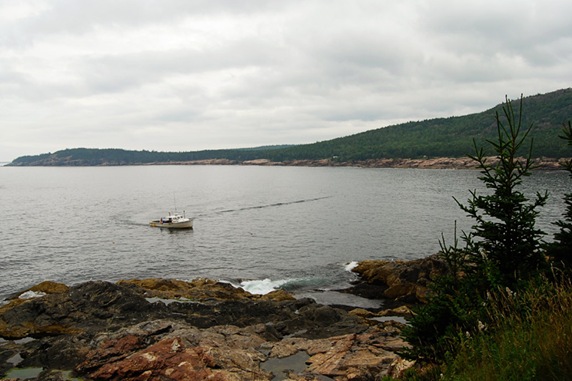 Many people were standing with us at this view point because there was a lobsterman down below, checking his traps. Just to the right is Sand Beach. 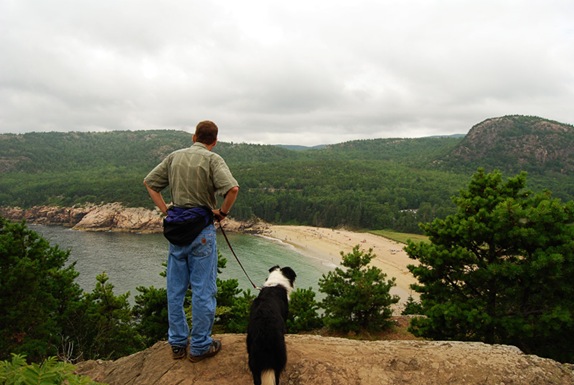 A gorgeous view of Sand Beach awaits hikers. When I’m up here, I always look to the right, over at The Beehive (the big hill) and say to myself, “I am so glad I’m not hiking on The Beehive. Amen.”

That’s a damn tough hike, with steps of stone and sheer drop-offs, handrails of iron drilled into rock that you climb like a ladder . . . it’s not for the feint-of-heart. But I bet it’s rewarding as anything when you’re standing at the top. I can feel it taunting me from here. Or is that just me? 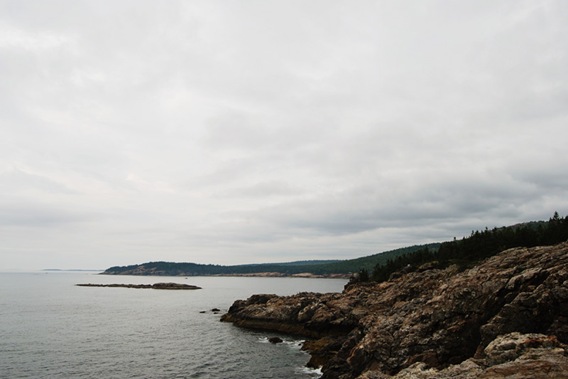 But this trail, it’s really nice. It’s about a 2 mile loop and rises above Sand Beach’s eastern side, peaking at Great Head, the easternmost point on the island. At the top of Great Head, 145 feet high, there are the remains of a tower that belonged to Louisa Saterlee and was given to her, along with Sand Beach as a gift by her father, J.P. Morgan. The tower had a salon and a tea room as well as an observatory, but it burnt to the ground during the Great Fire of 1947 and was donated to the park shortly afterwards.

You can see a small section of the crumbling remnants in the photo above, where the rangers are holding the paint cans. I would have taken more photos of it, but it wasn’t until I came home that I read about the tower. 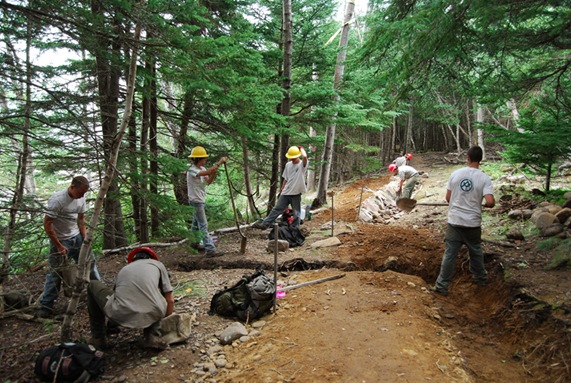 I don’t often come upon workers re-structuring the trails either, and this crew was doing a great job. The trail gets a lot of traffic on it in August, but we parked down in the parking lot on Schooner Head Rd. and picked up the trail down there, where this work was taking place. It was a nice uphill jaunt, with beautiful vistas along the ocean.

I enjoyed having you along for the walk. Hope you have a good weekend. I have several goals to accomplish and am looking forward to getting them done.

I just loved talking that walk with you and enjoying all those gorgeous views!!! I want to go there one day.

I love a good hike and from the pictures, you had a great one!

Oh, that looks like such a beautiful place for a hike! Thanks for taking us along. :)

I enjoyed this walk and all your lovely photos! Interesting to see the park rangers at work too!

Check my blog out I am giving a flower away!! Thanks!

I"ve only hiked trails once or twice in my life - unless I count hiking in Missouri aimlessly as a ~trail~. LOVE being outdoors! Right there with you my friend.

I've been hiking in the Blue Ridge Mountains of Virginny, the Grand Tetons of Wyoming, and the Great Smokeys of Tennessee, all are gorgeous. This looks very tempting and all of a sudden Acadia is on my list of top 3 places to visit whenever I win the lottery, which by the way is something like three hundred million today....

I enjoyed the walk Kate. Thanks.

Thanks for inviting me to go hiking with you! Albeit through your pictures. I didn't know hiking could be such fun and render such beautiful sights.

Growing up in Louisiana, we didn't go 'hiking'...too many mosquitoes, snakes, and other unsavory characters to venture into the moss-covered treed thicket, besides it being too dang hot and humid! Same thing here in southeast Texas.

Love going 'hiking' with you...

Here's to a great weekend that overflows into next week!

I had no idea this area could be so lovely.....thanks for inviting us along.

I am exhausted .. for a minute (because I look at pix before reading captions) I thought: Who took that photo of A with George and Kate? But it wasnt you, it was a redheaded Ranger!

:) looks like a gorgeous hike - I would so love to do it

that place is beautiful..... you have captured beautiful pictures!

Thanks for reminding me of the beauty of the Maine coast. I was at Acadida several years ago and loved it. If I had to move that area would be on my top ten. Fun!