The squirrels in Maine are a vocal group. The ones near our cottage were a pretty russet color with black stripes down their sides. And they almost sound like birds making their chit-chit-chit noises. Every time they make a chit sound, they change position.

And they drove George to distraction. 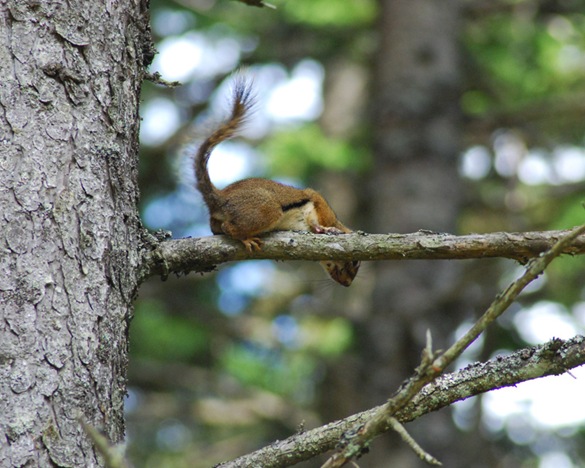 This one was actually trying to get the dog’s attention. 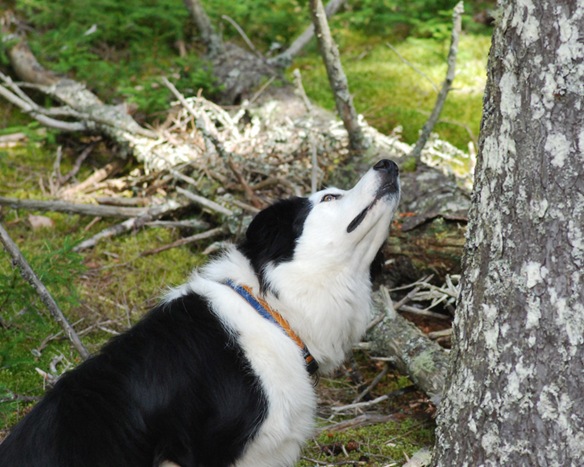 They see each other. George stands at squirrel point. 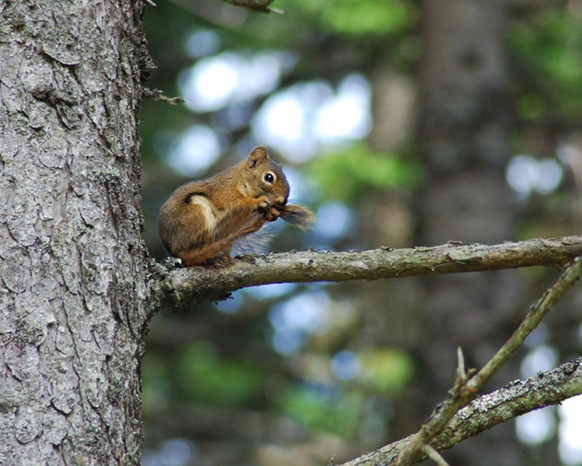 But the squirrel doesn’t know what to do other than to chew his tail. And then he ran away, far up the tree, and bounded onto another branch.

George and I went on our way. 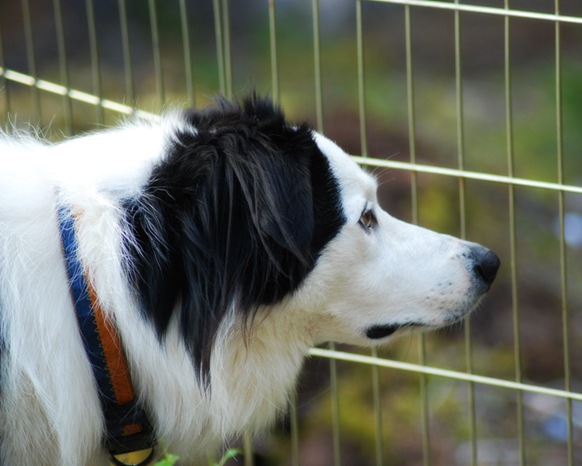 The following afternoon, while my husband was readying the lahbsta pot and I was out front reading on the deck, George heard the distinctive chit-chit-chit. I went inside to get my camera. 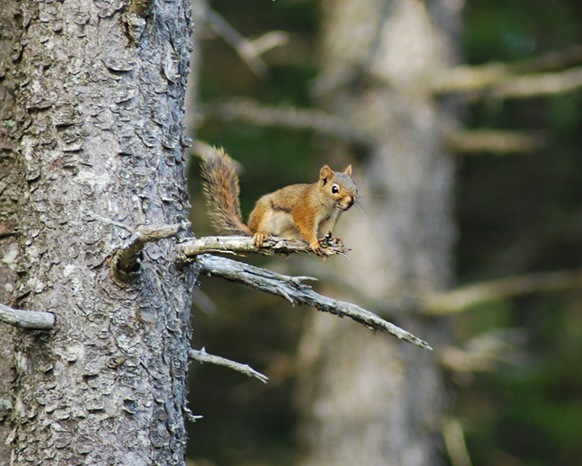 The squirrel was back and making noises like he was trying to get George’s attention. 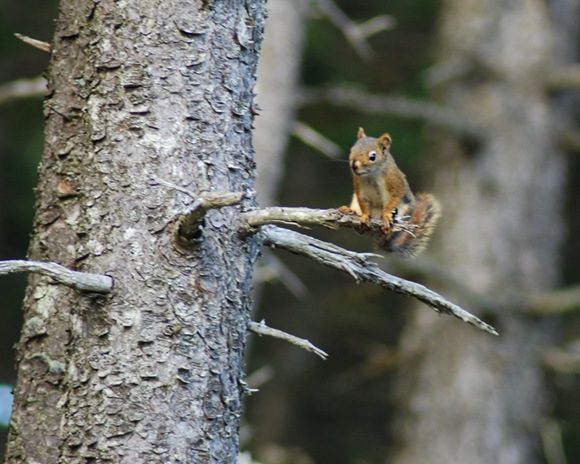 He kept chitting and moving and moving and chitting. (Sorry, Blazing Saddles was on the other week and I can still see Madeline Kahn as Lily VonSchtupp doing the “I’m Tired” routine.) But that squirrel ~ he was just too much for me to keep up with the camera.

Finally George got tired of all the antics and laid right down and fell asleep. I put the camera down and kept reading, after telling my husband that I swore that this squirrel is trying to get George to do something. He asked me what I had been drinking.

I continued reading and a short while later, I had noticed that the squirrel was now on the deck! He had crept under the wire that surrounded it and was now sneaking up to where George was napping. I couldn’t pick up the camera for fear of scaring him off or waking the dog. I continued to watch him as he went right up to George’s face! This surprised me and I must have let out a small gasp which woke up the dog. He seemed surprised to see the squirrel standing right there but in a flash, the little bugger had taken off again! 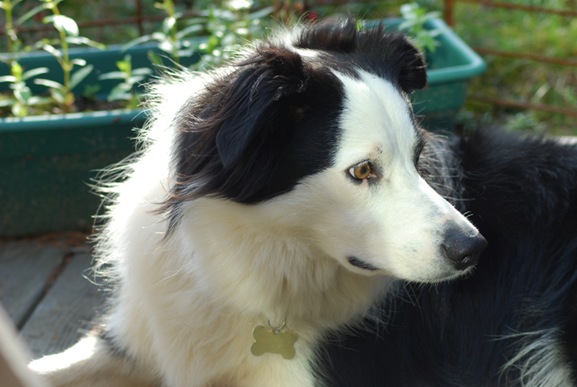 The second the dog had awakened, I did pick up the camera. And this was the expression on George’s face, as if to say “was that what I thought it was”?

He then jumped up to look for this devil squirrel.

And I went back inside to mix another cocktail.

Thanks for the POMtini recipe, Meg! (I promise. It was only my 2nd one).

Until tomorrow, my friends!

This will cure whatever ails you:

Place in shaker over crushed ice. Shake to make the Sounds of Happiness. Strain into a chilled martini glass. Garnish with a curl of lemon zest.

OMG, that look on George's face is priceless! I can't believe the squirrel went right up to his face.

That's the same thing I was thinking Mary! Those red squirrels are nuts anyway.

One of ours sits on the deck railing just looking at Lily while she looks back. There's no way Lily could catch it since they're going 90 mph even when they aren't moving! LOL!

Great story and pics to go with!

Darn! would have loved to see that photo! Did you see the squirrel that got into the vacation photo? It's priceless - go here: http://tiny.cc/5tlM9

That squirrel is either brave or crazy. Love George.

Thank you, everyone. And oh, Annie! I can't believe I hadn't heard of the squirrel in the vacation photo yet. That was too funny.

Caroline, I had to add your blog to my ever-growing blogroll that is threatening to cover me completely. Your photos are amazing. And Kerri, your most recent singing bird photo is just beautiful!

Snuck right up to his head, Mary!

George is beautiful. The classic dog. I imagine he's a great subject for pictures.

That squirrel looks either very small or those Maine trees are really big!

Hey, thanks for getting mad about my mess on the farm! They're making it up to me, lol.

Hehe...LOL!!! Poor George and what a cheeky squirrel. Laughed about the Madeline Kahn song. That was SUCH a good take-off on M. Dietrich's "The Laziest Girl in Town" (I'm not THAT old just love old movies). Kahn was great in everything...esp. Young Frankenstein. Thanks for the fun photos even the one you didn't get.

We have a squirrel that torments the dogs too. One day, it walked up to the doggie door and just looking in the sliding glass door as if asking where the heck Sophie and Dora were...it was a bit unnerving to say the least. Squirrels these days are just too smart!

squirrels can be so naughty and mischievous. cute shots

Oh, Nice picture of George It seems that he really want to catch the squirrel above,Lol

have a nice day!

So long as the squirrel didn't actually speak to you directly, I would say that you were not abusing cocktail hour. I know about these things. That is a red squirrel by the way and they are very antsy little fellas - never stop moving.

what amazing expression in this series Kate ...we take Sam with us on vacation too!

So, did they cure whatever ailed ya? :-)

Oh my gosh! What a brazen squirl. My Sadie loves to chase squirls she feels that it is her famly duty to tree them at all costs. She will stand and bark at them for 15 minutes or so.

To bad you didn't get a shot of the squirl before he woke George up, but I do love the expresion on his face :)

That squirrel sure had balls! hee hee... to go right up to George like that.

...your story reminds me of the photo of the young couple who sat their camera on a rock to take a couple's picutre...along comes a squirrel to pose just perfectly!!!!
if you haven't seen it, am pretty sure it's on YouTube.

That is an interesting squirrel...wonder if he has some chipmunk in his lineage....And my George? Too precious;)

That squirrel reminds me of a chipmunk .. very impish ...

Love the look on George's face in that last one. Stupid squirrels are destroying my bird feeders here!

Too cute...maybe it was a girl squirrel who was trying to get a little George action while he was on vacation.

Cute story. I am sure that little squirrel knew exactly what it was doing and wanted to make George chase him/her. too funny and great captures. MB

Great post. That George is so awesome. I love the look on his face in the last photo. Beautiful photos.

What a great post, so entertaining. That squirrel was definitley trying to get George's attention, so totally cute!

...Me loves George. And he would have a hayday here at our place with all the squirrels. Some days we have up to 10 squirrels under our birdfeeder! They're cute as all get-out tho'... ;o)

...And, thank you very much, I now have that song stuck in my head:

ha ha :)
your story is beautiful.. loved all your pictures! i enjoyed watching them. The dog is such a cutiee

I love that expression on George's face! Poor George.

I was wondering if Meg's recipe was squirrel stew?

This was so funny!! I bet that squirrel sneaking up on George was a sight to see!

I absolutely love this post. It is my favorite one from your blog, so far. I love how you used photographs and writing to tell a funny and entertaining story. Your a damn good blogger.

What a fun post. Those squirrels can be bold little stinkers, eh?. Love the expressions on both of their faces. I can only imagine what yours looked like.

You should write a book, 100 ways to entertain a border collie..and this could be one of the entries! Love the photo of George looking up the tree!!

you should ask samantha for her musings on squirrel noises. she can get very heated.

I LOVE this post, Kate! Your photos are AWESOME and the story behind them, well....you know :)

That George is a handsome fellow! My dogs do the same thing!

Oh my gosh Kate, such sweet pics! I adore that you got George right when he was awakened!!! cute