It’s been a complete bust of a day, as far as cleaning my house goes. But who’s the wiser? It’s only the two of us that sees the mess and it will still be here waiting for me when I’m ready.

I spent several hours looking for, in vain I might add, a belt for my Eureka vacuum cleaner. It’s ridiculous, really, that such a common item was either not available or sold out at the five fine shopping establishments that I visited today. Forces in the universe were against me today, that’s all.

At the final place, a Lowe’s in Middletown DE, I was so disgusted that I ended up just buying another vacuum. It’s an inexpensive lightweight Shop Vac upright that was only $49 on sale. It’s nothing to write home about but should have come with earplugs – it’s that loud.

So I’m posting some photos of the Reading Terminal Market in Philly that I took last Monday, just for the hell of it. And they’re not that great, so don’t get on my case. (As if you would, dear readers). 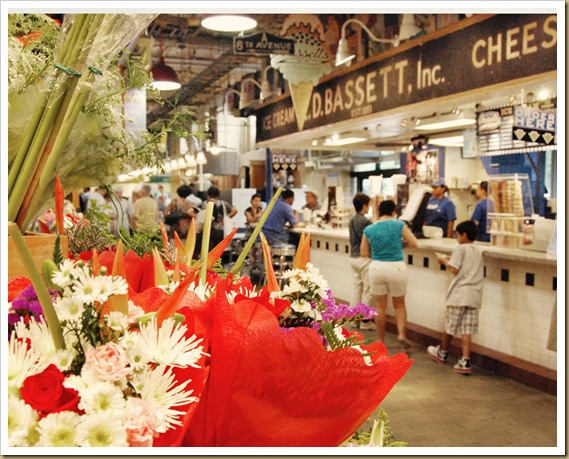 We had Bassett ice cream for dessert (among other things). 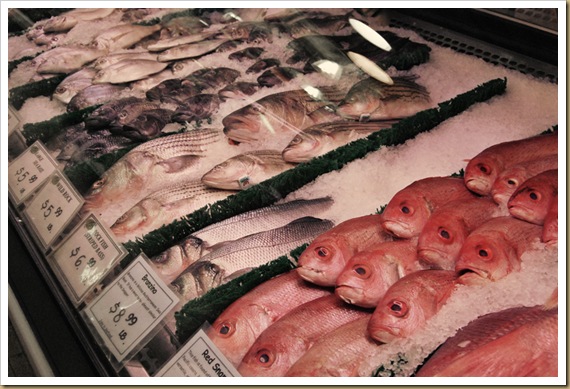 You can get anything you want at Alice’s Restaurant the Reading Terminal Market. 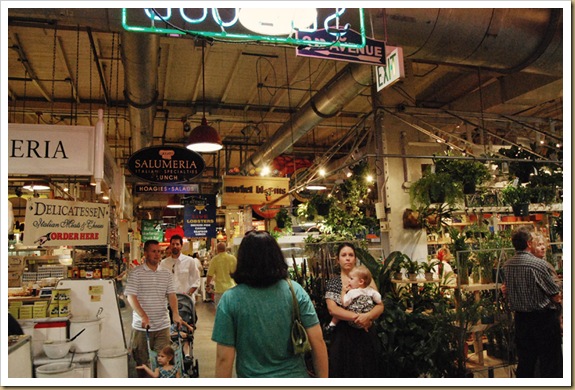 Even plants, jewelry and beauty supplies. 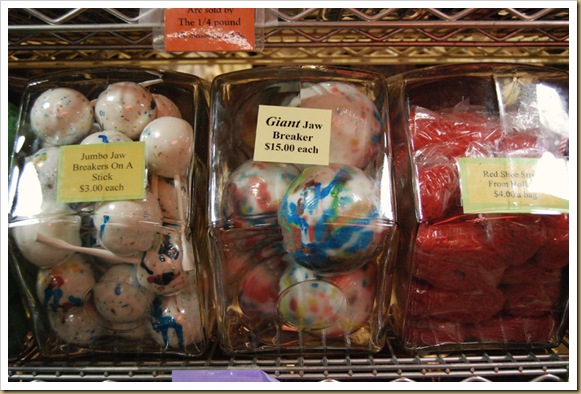 Apparently, this is also where the Jolly Green Giant gets his giant jaw breakers. I don’t know who else would want a jawbreaker the size of my fist.

They even come on sticks. Gah! It’s a dentist’s nightmare! 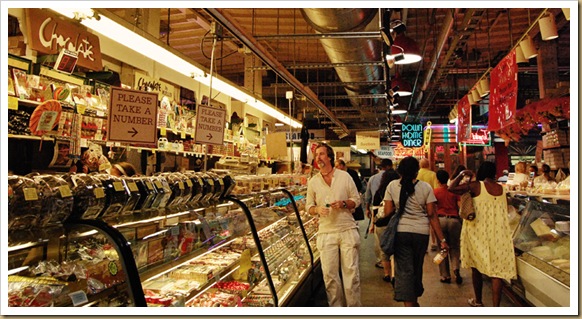 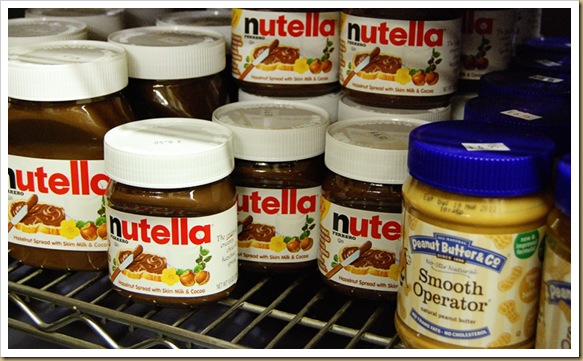 My idea of the perfect dessert. I mean, just open a jar of each and and grab a spoon. Oh, my. Did I say that out loud? 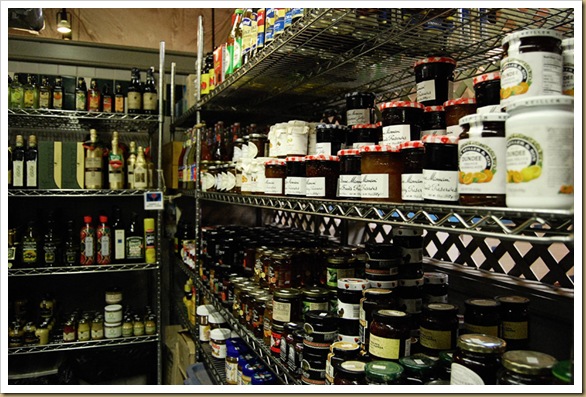 I went into this specialty shop to see if they had any Marmite, one of my husband’s favorite oddball food items. They were completely sold out but another shipment was on its way. I toyed with the idea of getting him a jar of Dundee marmalade instead but didn’t want to spend the nearly ten dollars on it.

And now I only hope I haven’t overly excited you with my day.

Do you edit every single photograph you take?

I'll take a jaw breaker on a stick.

...You know sometimes cleaning house is just not meant to happen. There's days when I want to clean house, I mean I really need to clean house but it's like it just doesn't work out no matter how hard I try. It's like I'm outta sync and nothing goes right but then on days when I feel like cleaning house and the laws of nature are on my side - woo doggies, look out! It's like badda-bing-badda-boom everything falls into place... I can't explain it, it just happens that a way... And why I'm babbling on and on about this topic I haven't a clue...*sigh*giggle* ;o)

...Btw, thank you for the grape juice recipe. I'm gonna give that a try when our grapes start comin' in... :o)

I love places like that...where you can see all the wonderful specialty items in the world.

I will take the nutella and peanut butter with a spoon....and a tall glass of milk.

I looked high and low all over the house yesterday for a vaccume bag. The one in the vac was stuffed with dog hair. Mentioned it to Hubby when he got home and he walked to the closet (where I had already looked twice) and there were the new vac bags... doh.

My least favorite appliance by the way.
Di
The Blue Ridge Gal

I love the market photos...wish we had one here.

So neat- I miss that about the states, those really cool huge markets. Yes, there are some markets here but nothing like that..and nutella and peanut butter..you would so do well in my house, that is one of my kid's favourites..although they use something called Nugatti here which is pretty much the same as nutella. I HATE jawbreakers, cringe when I see them..glad my son didn't see them..he's been banned from eating them but still loves them...UGH!!!

Wonderful shots! Ooh the BIG jars of nutella. I have heard of those... Our grocery store carries Marmite but I am not brave enough to try.

BTW, my 4 year old vacuum, I have to order parts direct from Dirt Devil. Why do they think we need to replace these things every couple of years?

I love the market-a great way to spend the day.
And I love your photos!

Scary that the Jumbo Jaw Breaker on a Stick are SMALLER then the Giant Jaw Breakers .. silly me I thought Jumbo was the next size up from Giant.. its back to studying the ginormous table... dont make to make a fool of myself and insult a humongous lover... Gah

The market reminds me of Chelsea Market... I likeee ..

I love the pics...reminds me of Pike Street market in my hometown.

Yes, LouDuk, I edit every photo I post except for the ones I don't edit. (Which aren't many).

Oh, and I vacuumed this morning. I am not in love with my new vacuum. At all.

OMG....Marmite. Another person in the world besides my mother loves Marmite!!!!!!! I laughed out loud when I read that.
I have been to the Reading Terminal market when I did a wholesale show (a bust) right across the street at the Philadelphia Convention Center.
And there is nothing wrong with eating peanut butter out of the jar with a spoon. NOTHING.

I beleive this market looks so familar. Was a movie shot there? It will come to my at 3 in the morning.

Kate, did you try the internet for belts? Things come so quickly in the mail,you know. You could take the airplane engine sounding one back.

You're right, how dirty can it get with just the two of you living there? Bathrooms, dust, vaccuum. Bingo you are done! But Honey, it will wait.

I love the market shots.. it's something I like the idea of photographing but always feel so self-conscious about using my camera at an indoor public store. I need to learn how to overcome that. :)

I love those market photographs Kate. Not too keen on all those little pink fishes looking my way, but otherwise they're great. Speaking of Marmite, I read a really good idea in one of Nigella's books (do you have Nigella over there?) She says if you wish to make a whole lot of Marmite sandwiches, soften some butter and beat the Marmite into it before spreading - apparently it is much easier to spread that way. Just thought I would mention it!

Love Reading Terminal Market - something for every one!

I wanna go there!!

I love the shop. I love that there's such cool stuff there.

You can keep the jawbreakers. My teeth hurt just thinking of it!

Love the market photos! Has your husband tried 'vegemite'??

My cleaning day was a bust too, but you made me feel better about it! There's a dog hair film all over the house, but that Earl Grey sounds great, I'm gonna make a pot, pretend I didn't see those Nutella pics and keep blog surfing. Have a good one.

I yearn for that kind of market... mine is my backyard garden and local supermarket... sigh.

And has your hubby tried Vegemite? Better than Marmite!!! Heh.
:-)
BB

Good times is right, at least that day at the Market was. And you are so NOT shy about using your camera. It was fun to see the pictures that I saw you taking.