You’ve all heard of POM Wonderful, right? You know, the juice made from pomegranates?

Well, imagine my surprise at receiving an e-mail last week from a representative of the company who told me that she’d come across my site while searching for a few blogs that she thought would have quality tips on how to live a healthier life. She also told me that I had featured some fantastic recipes and that her company, POM Wonderful, would like me to try a sample of their product.

I wrote back and asked her if she was sure she had the right blog because I’m not really a recipe blog. I told her I was more a nature/photography blog than a healthy eating blog. She quickly responded, telling me that there’s more to healthy living than just eating the right things, and that there was nothing expected of me in return. They just wanted me to try the juice.

So I gave her my work address. And then I sort of forgot about it. 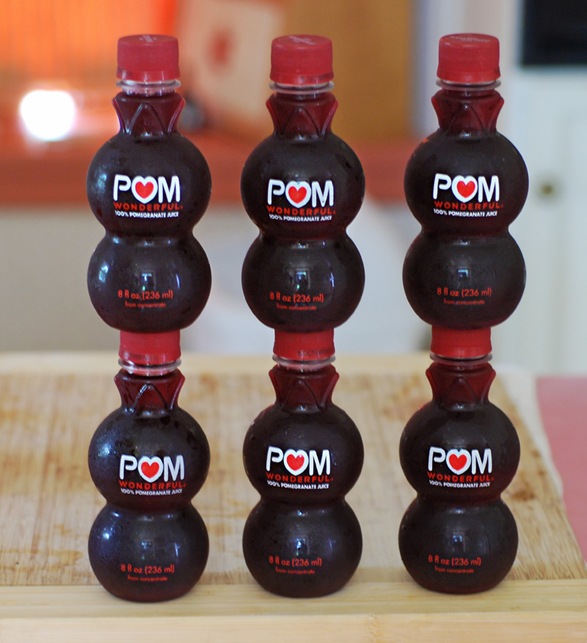 A couple of days later, my boss and one of my co-workers were sorting out the mail that had come in. “Kate’s got a package,” they chimed. “Ohhh, and it’s from Los Angeles. That’s hoity-toity!” My co-worker began to tease me because they’re always saying how hoity-toity I am. (I guess if you go to a nice hair salon every 8 weeks and get a pedicure a few times a year, you’re hoity-toity). 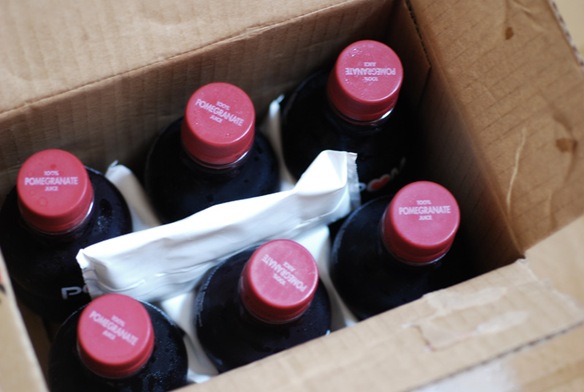 I explained that it was a gift from someone who works for POM Wonderful, that they had seen my blog, and yadda yadda yadda. They were both skeptical.

Look how cute these little bottles are! Very impressive with the miniature cooling system as well. There were instructions to refrigerate immediately, so I did. There were actually 8 bottles but I drank two of them.

When I got home, I read the information that came with these tasty little critters. I had no idea of the health benefits of this juice, nor did I know that the pomegranate was one mankind’s earliest cultivated fruits. I read that the pomegranate has been revered over the centuries as a symbol of health, fertility and rebirth. I read about studies that touted all sorts of health benefits including decreasing arterial placque, prostate health, and even improved erectile function! Wowee!

It stands to show you that good things really do come in small packages. Thanks, Molly.

Oh, and PS ~ The manufacturers of POM Wonderful did not ask me to say anything publicly about their juice. I am not a spokesperson for the magical powers of the pomegranate. I just really liked it a lot.

UPDATE: I neglected to post the official [POM Wonderful] site. Here you’ll find recipes and information. There’s a whole section on cocktails, too. I love the looks of the Pom Julep . . .

That is so awesome. They must have known their product was so wonderful you would have to say something about it.

Hubby just purchased some pomegranate juice Sunday to start drinking for his prostrate. Had not heard of POM brand so will have to run it by him.. Thanks!

Smart move on their part! I will have to try it!

I love it too - and like it was suggested, it makes great martinis too.

That's so ironic, as since we are trying really hard to eat healthier, we bought 4 of the larger size bottles just the other day...and yes, it is very yummy.

It also boosts brain function and is a great antioxident...but you may have already said that...I forgot.

I never knew that you were hoity toity.
I am shocked.

POMtastic! I just love the stuff.
(Not meant as an endorsement; I'm not employed by the company that makes it, nor do I grow pomegranates, but wish I could.)
Yes, the bottles are way cute too.

That is just awesome. How cool. My youngest would be so jealous as she loves the stuff. Enjoy and to your health!

Actually a healthy product - but your blog is MAGIC!!!
Aloha

Well, that's all I needed to hear! Yes, I AM going to go out and buy some! And you know, I did have a Pom martini at the 2007 Blissfully Domestic blog convention in Nashville, TN, and it was mighty tasty! Wish I had one right now!

Hmmm. Haven't had the pom tini's. Must find a recipe! And it IS a smart move on their point. Free advertising via bloggers!

POM can be the official advertiser of the Blog Fest movie.

I've had one pedicure in my life and very likely won't ever get another one...unless it's to star in the Blog Fest movie. Then I might even get a hair cut too.

Cool, I like the bottles, too. Haven't tried it, yet.

Well....at least you didn't receive a box from your ax-murderer friends here in the Northeast! That's all I'm sayin'! ;-)

Go for it girl! You are more than deserving, and this wonderful blog of your reaches more folks than you think it does! xoabb

how wonderful ...life throws a curve every now and then in the shape of a pom bottle!

I saw it advertised recently and decided that I wanted to try it. Glad to hear it helps to boost brain function, 'cause I don't think there's any thing in the world that could help my prostate or my erectile function...ROTFL
I have fought high cholesterol for years and I wanted to get it for help in that area the fact not withstanding that I love pomegranates.You go girl. I wonder if it will help my knee I fell on today..eowewwww. It blew up so quick I had to take pics to post it as a public service announcement.

Anyway, keep trying to healthy us up, my friend. Folks like you letting us know about the good-for-you-stuff.

Also meant to say that I LOVE LOVE LOVE the flowers in your previous post. You are so clever! I see they are already doing duty in the sidebar for the photo a day blog. Good on them! And you, Kate!

What fun! I love pomegranite juice and I'm dying to try a POM tini!

hey kate, lucky you. we love pom wonderful here . i use it often after my daughter introduced me to the pom martini... anyway great site. love ya

I have never ever tried it and I'm really tempted.

How neat is that though that they hooked you up with something you actually LIKE? I constantly get requests to try and then pimp stuff I don't like.

OK that settles it, I'm gonna try some POM.

Oh and your blog...I can totally see why they chose you. You have a completely healthy attitude about life and that transcends more than just food m'dear! There is a reason why I read you before I go to bed. It's the beautiful images and words that help ease my often troubled mind!

...You are so friggin' awesome! *giggle* ;o) It's no wonder they picked you girl and I tip my hat to POM for doing so... I love their juice and purchase it weekly. It's my lil' treat to myself... :o)

...Congrat's to POM for making an excellent choice and congrat's to you for being chosen! (if I didn't love 'em enough before I certainly love 'em more now! *hee,hee*:o)

Ooo, love the title, and the photo of the bottles all stacked up -- so cute!

LOVE Pom .. they have one with chocolate in it which I am sure has all sorts of wonderful healthful uses.. I hope you told your co-workers that it was POM oil to slick up those NYC axes us murderers use ...

i hear a lot of benefits from drinking pomegranate juice. lucky you, you got one whole case of it!

I had no idea you were hoity toity! Now I know!

I have heard the juice is healthy. But my goodness it's expensive.

I think it'd be good with some vodka in it;)

I had a pomegranate martini for the first time last week, it was delicious! I'm not sure if the health benifits are as useful when taken as a martini, but oh well!

Yum. That stuff is great! Hopefully she'll find my blog too (LOL).

never tried that before. i always thought the bottles they came in were cute. will need to trial what's inside now.

Lucky you, Kate - expect you have druk it all by now.

Wow Kate! That's very cool! I am familiar with their juice..yummy stuff!

I love me some pom with vodka. Simple, yet refreshing, and apparently, healthy too!

...and you can make wonderful martinis, too!

I think it's a real honor for them to send this! The bottles are so cute!

This will cure whatever ails you:

Place in shaker over crushed ice. Shake to make the Sounds of Happiness. Strain into a chilled martini glass. Garnish with a curl of lemon zest.

I will have to give it a try Kate! Meg's receipe sounds good too!

Oh Katydid, pom-tinis are the BEST. I think Martha Stewart has a recipe for them.

They're really, really good...especially at Christmas because they're so red and pretty. :-)

Very cool...just think of all the lovely pomegranate granita or sorbet you can make for the rest of the summer!

In fact, we've just about eaten all the granita I made a week ago & pomegranate juice is on my grocery list this morning.