Is anyone watching “America’s National Parks”?

Ken Burns’ week-long documentary about our national park system aired last night on PBS and the cinematography alone is worth watching it for. The six-episode series airs nightly at 8 on PBS this week and concludes Friday. Directed by Ken Burns and written and co-produced by Dayton Duncan, the project took six years in the making.

The film traces the birth of our national park system from a single idea that began in the 1800’s and follows it through to its current state. With the use of archival photographs, personal memories, and the kind of storytelling that kept me intrigued, I’m looking forward to tonight’s offering. The USA has some of the most beautiful and diverse scenery and each one of its states (with the exception of Delaware) boasts a national park within their boundaries.

So in honor of the series, and because I feel like it and I can do what I want, I’ve decided to post a few postcards of some of the national parks I’ve been to lately. 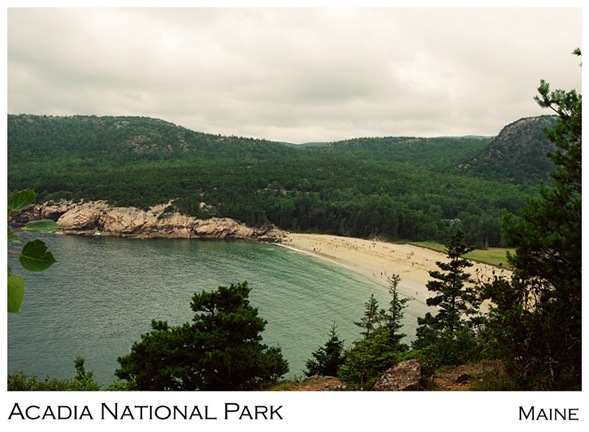 My husband and I visited Acadia National Park this summer. I took this photo standing above Sand Beach, just outside of Bar Harbor. 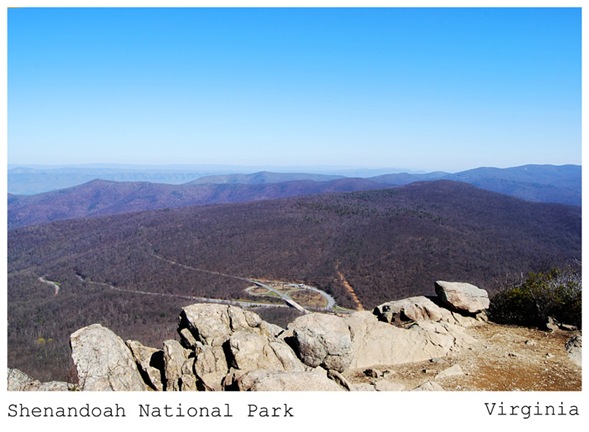 The beautiful Shenandoah National Park boasts the Skyline Drive, a road that runs north and south along the crest of the Blue Ridge Mountains in Virginia. The photo above was taken in April 2009, standing on Mary’s Rock and overlooking the Thornton Gap Entrance. 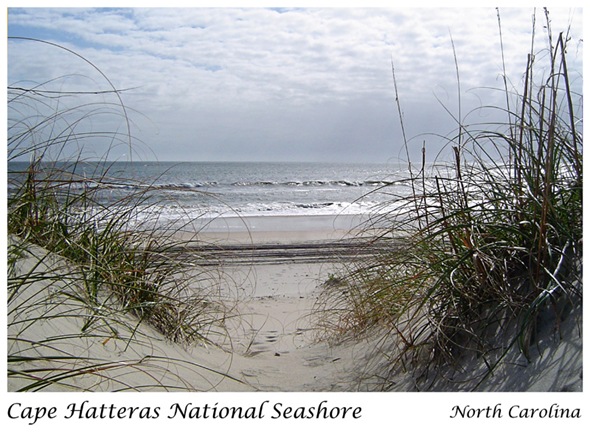 I took this photo with my old Sony Cybershot in November 2006 on Ocracoke Island. That’s how long it’s been since I was in North Carolina and I miss it terribly. The Ocracoke Lifeguard Beach was chosen ‘America’s Best Beach’ in 2007 by Dr. Stephen Leatherman (also known as Dr. Beach).

And that concludes my postcard greetings for today. You all know where I’ll be at 8 tonight.

I am right there with you...watching this amazing series as I type!!!

I want to visit all of them, but most of all I want to go to Cape Hatteras. Thanks for the tip about the National Park series.

And thanks for the beautiful shots!

Cdub and I are all over it. It is wonderful and so are your "postcards"! Ever been to Ocracoke Island?
Please come to the Oyster Fest!
<><

We are watching! Waiting for our beloved Smokey Mountains to be shown.
Misha

I sat down to watch it with Hubby... in fact I talked him into watching it, but we are not religious and there was so much talk of God, in a poetic sort of way, but Hubby just got up and left the room after about 30 minutes. I changed channels after another 10 minutes of God comments.... ugh for us.

I love your ground level look down the beach path to the shore - that shot is actually better than the majority of commercial postcards I see.

I didn't notice any God comments myself and I watched most of last nights show, but I was in and out of the room for parts of it. Tonight we're watching Dancing with the Stars instead.

I know my parents are watching the series too. Back in the early 70's our family traveled to California via car, twice, stopping at all the big parks along the way. I hope to get back there again one day! The west is so beautiful!

I watched it last night....amazing....I'd forgotten it was on tonight, so I'll go promptly and watch it now! I was amazed at the Yellowstone story...and that guy that was lost for over 30 days!

Thanks for reminding me........I forgot about it, but it is on now.....finally a night without baseball.

Thanks for the reminder!

Our PBS station showed the first 2 installments yesterday, several times. I can only assume that it is because Monday Night Football is in town. Enjoyed what I have seen, so far!

Your last photo looks a lot like my Beach one ... I just love grass, sand and then the water.

I started watching it yesterday and found it very interesting. Then hubby came it and asked "Are you watching this? There's football on!" Guess who won that one?

I want to retire to the Cape Hatteras area. So beautiful. No, not watching it but will catch up on it later on DVD.

He is magic. And his middle name is Lauren;)

Wow!! the pictures are divine!! I loved all the national parks!

I LOVE your postcards! Completely forgot about the PBS special...I want to watch it from the beginning, so I guess I'll wait for the rerun.

what a fabulous idea kate..i have enjoyed looking at your images...
dont watch much TV, but do love the parks!

So pretty. My hubby and I love to visit the National Parks!

Beautiful images, as always. I particularly like the beach shot. I can drive there in no time but it has been awhile since I have been. Perhaps I will head down there Saturday.

I have been fortunate to have visited many of our national parks, particulary out west. My favorites, by far, are: The Grand Tetons...so majestic and breath-taking; Yellowstone...the wildlife is unbelievable...up close and personal (even saw a grizzly bear!); and Glacier...high mountain wonders...gorgeous alpine flowers! I recommend visiting these and all of our parks! Now it's our time to visit our parks in the east!!!! Thanks, Kate, for the postcards and reminder to watch the series!

Yup, I'm watching! Last night's segment was excellent. Did we expect anything less from Ken?

Lovely pix ..and I am sure the series will be fascinating ..

After I read your comment last night, I quickly jumped over to PBS. But honestly, I needed my HOUSE fix...I plan on catching it and record it.

Oh, I've missed these. I'll try and tune in tonight. Thanks for the heads up!

I just returned from coffee with a friend who is watching the PBS special. Now I read about it in your post. I'm tuning in tonight! The photos are beautiful!

I have not been watching but I am loving the last photo taken with your little cybershot.

I have to watch Biggest Loser tonight but will definitely be watching later this week.

Thank you Kate for telling us about the series - we watch very little TV so missed Monday's episode but watched last night and will continue to do so. My only complaint is the sound - why does the narrator always have to sound as if he is whispering and telling us a secret (or is it my hearing?).

I've been enjoying the National Park series in bits and pieces...it is nice to have something beautiful and intelligent to watch on TV! I think you could sell your photos for post cards...really!

Wouldn't you just love to get in a camper and travel to all 58 of the national parks?...I know I would:)