Some readers have written asking me to share the processing on some of the photographs I publish. Although I’m not in the habit of writing down the steps I take when working in Photoshop, this time I actually did. And know what’s even better?

What’s even better is that every single action and texture that was used in this group of photos was absolutely FREE. I’ll give a link on each one for you.

I liked this little grouping of birds and the color of the barn in the background. 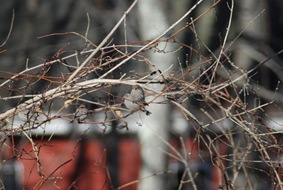 In know the change is subtle, but it’s what I was looking for.

* For the life of me, I can’t seem to find the free texture on the MCP Actions site or anywhere else. Sorry about that. I can’t remember where I downloaded it. 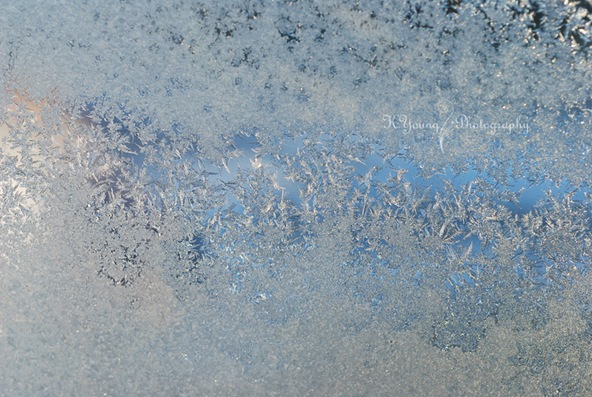 The window in my bedroom when I awoke this morning. 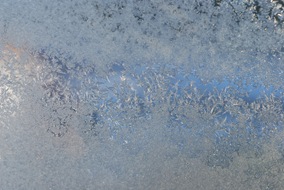 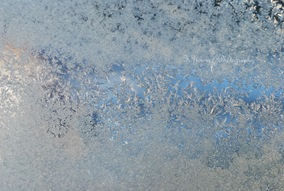 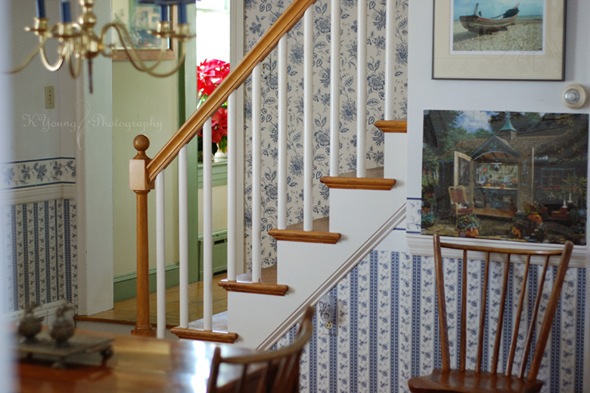 The holiday decorations are finally put away, and aside from the puzzle thing my husband has propped up against the wall here, all is back to normal. And clean. 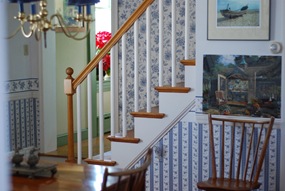 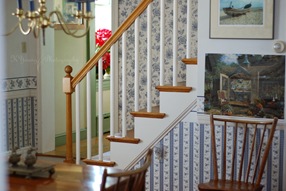 I like the warmth of the second photo better. 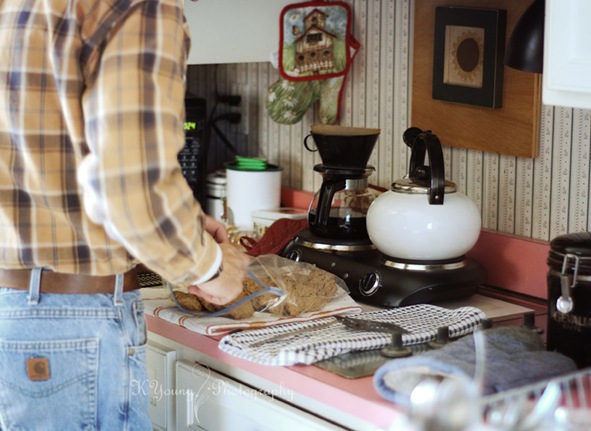 My husband putting away the cookies he’d just baked in the pink counter-topped kitchen. 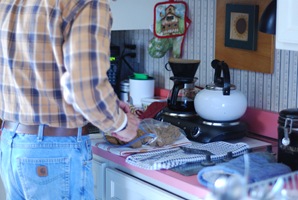 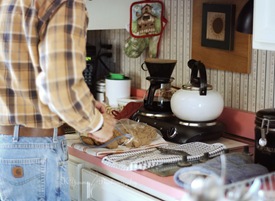 I did not like the blue tones in the SOOC. At all. 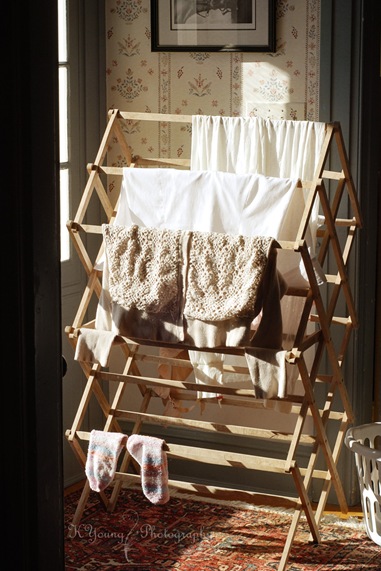 I love saving energy. We’ve had this Amish drying rack for 20 years and when it’s this cold out, I like hanging the delicates inside on this. I made sure there was nothing embarrassing here before I shot the photo, taken in the front entry foyer. 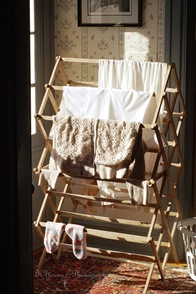 I really disliked the SOOC. A good photographer would have probably figured out how to capture the sunshine rather than use PS to adjust it. But this post isn’t about that. 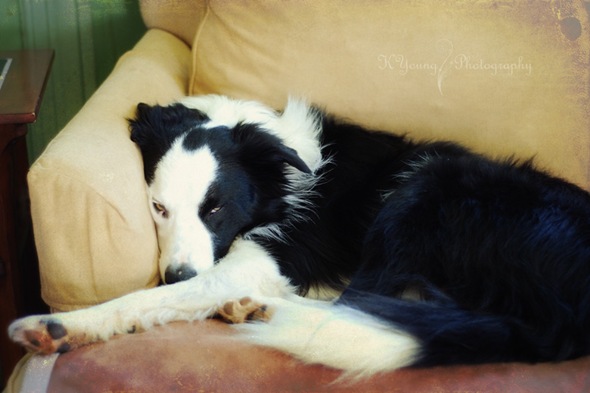 After taking the photo of the drying rack, I turned around to see George napping in the living room. On his own couch, no less. 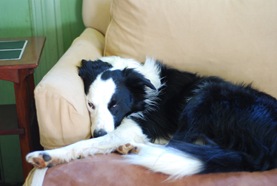 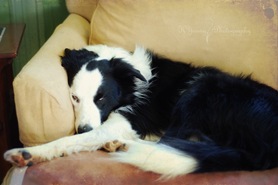 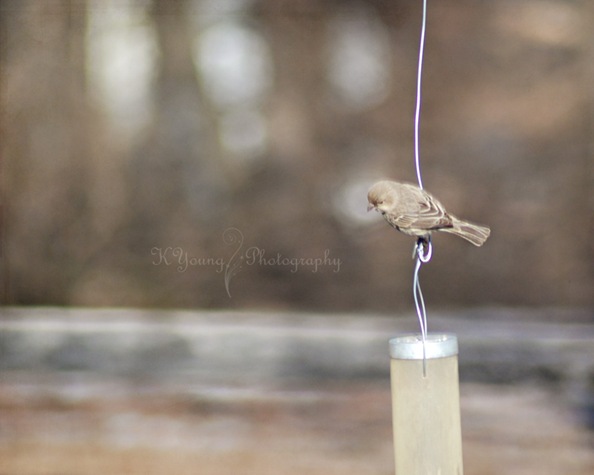 I loved how this little sparrow looks waiting for a turn at the feeder below. At least, I think it’s a sparrow.

I prefer the cropped version so much more. 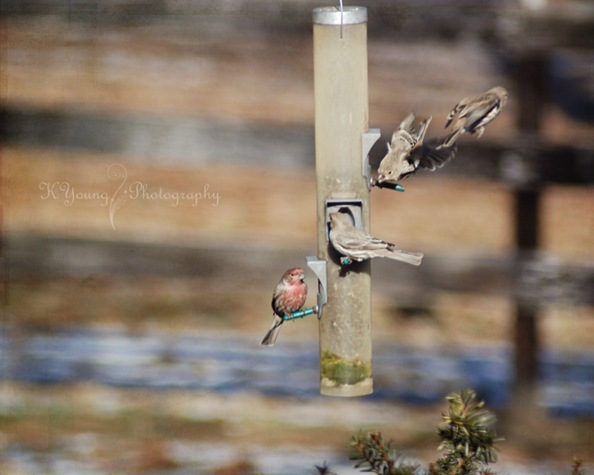 I liked the colors in this one and all the birdie action as they jostle for a spot on the feeder. 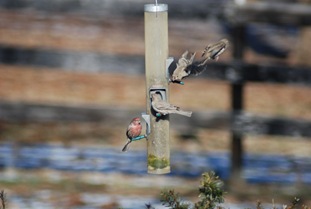 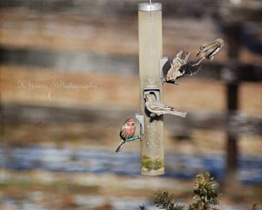 I cropped this one because it asked me to.

Well, that took a lot outa me. Hope you enjoyed!

oh my, now I'm thinking about how imperfect my pictures are and how you can see that! (eek) It does make such a difference though, wish I had a good camera, I just have a cheap little digital one! George couldn't take a bad picture if he tried though..you got an easy shot with him! come say hi :D

Wow you put a lot of time and effort into editing your photos. I usually take a look at mine in Photoshop CS3 and crop as needed, sharpen if necessary and downsize for blogability. This is more time than I'm willing to put into my photos but yours sure do look great!

Thank you for all of that information.I have down loaded some textures but I don't know where they went. Then I found a couple of them in flicker I am learning lots and lots But there are so many more thing to learn. I am having fun an you are such a big insperation.
~~Love Hugs and Good Thoughts~~

Thanks for the mini-tutorial!! Lovely pics as always.

Bang up job! Since I have corel, that was greek to me, but then so is corel. I just now discovered how to move a photo over. I thought that was a big accomplishment for me.

I loved the way you changed the colors just enough to make them sing in all their beauty.

I'm thinking house finch. But what do I know? Love you. And George. And A. And your pink countertops.

You do such beautiful work.

Wow Kate you put a lot of time into this post! I sure wish I could download those actions but I don't have CS4. Maybe one day!

I do love using textures though I have tough time dialing them down like you do. They can make such a subtle difference but its just enough to change everything.

Forget the pictures (except for Georges)...and what you did to them,...How do I get the husband to come to my house and bake me cookies!!

...Each and every one of those I loved and I couldn't get over the difference between the SOOC and the enhanced - incredible! You have such a good eye for this...

oh golly, this post took you a LOT of work! I so want to learn about textures some day...I just LOVE seeing your befores & afters & realizing all the possibilities.

Question: sorry, but what does SOCC

Always a pleasure to drop by your space here. "Hi George!"

Thanks for the inspiration, CG!

ooops, didn't finish my question: if you have a moment, what does SOOC stand for???

OK - all makes sense to me, Kate, but WHERE do we get your EYE for the finished product? Hmmmm.

Sweetpea - SOOC is Straight out of Camera. :-)

I have just nominated you for a few Bloggie awards Kate - good luck!! Anyone else who wants to do the same should go to: http://bushbabe.blogspot.com/2010/01/splish-splash-rain-revellin.html
:-)
BB

A fantastic post, Kate!!! I never write down my photo processing steps and am left floundering after when I try and reproduce. Don't ya think the lightbulb would go on??!!

Amazing how such subtle changes make such a huge difference - thanks for sharing your expertise, Kate.

Wow, you're good! A little tweaking goes a long way, doesn't it?

Love all your bird pictures! I wish I had a zoom lense!

I especially like the picture of the drying rack!

You are such a good teacher, I need you to come here ASAP and give me a private lesson with my new D90 ... I can offer you all of Central Park .. especially Belvedere Castle as incentive .. and sushi!!

Thank you for taking the time and sharing these tips with us! :-)

Love the new look and your hands on training, you go girl!

I have taken some time this morning and gone through a lot of your photos! They are amazing. Photo shop really makes a difference doesn't it! My new camera a Nikon D3000 has been so much fun...there is so much to learn...now comes the photo shop part.... LOL and I thought all I had to do was have a great camera! HA

That's a whole lot of work. I haven't messed with any of my photos this winter... perhaps this spring I will get back into it, it's just so time consuming to play with them that most of the time I just throw my hands up and surrender to the SOOC look...

Your home looks lovely. I love seeing where other people live. :-)

Wow, what fun! Post processing is my favorite pastime. Actually it's more of a full time pastime... lol I spend way too much time playing with actions in PS. :)

Love all your birdies! :)

Thanks! That was fun to watch. You do such a great job with textures!

I wish I had your patience Kate - I love to play in Photoshop but must admit that I have never taken the time to master it. Thank you for the tutorials - I will go back to this post one of these days - if only there were more hours in the day to do all of the things I enjoy. I often ask myself how I managed when I was still working.

Those are really beautiful pictures. You do a great job.

This is exactly what I needed Kate!

I got Photoshop Elements for a Christmas gift and I'm still trying to figure out the basics...hopefully I'll work up to even understanding what you did here:)...Do you recommend any particular sites for learning the basics of layers and actions ...well even more basic that that really:)

beautiful! thanks for sharing your undies with us!! just joking!!

I like them all, but of course George is my favorite

I'm not a photographer but I do SO enjoy a nice cup of tea or coffee. I've never seen pots on a warmer/hot plate like I see in the photo. Is that an accident or do you keep them warm that way? What is sitting on top of the coffee pot?

mander, I did try to respond but your blogger profile doesn't have your e-mail enabled for me to see and return the comment. The range is from 1965 and only works with certain pots. My husband put a small cookstove on top of it and he cooks with that. On top of the coffee pot? That's a Melitta coffee pot. The plastic cone sits on top, you put a filter in it and then some ground coffee and then pour the boiling water over top. We can only find replacements either on the internet or when we go to Amish country.