Surprises, in more ways than one

First surprise: The response to my most recent post. You continue to surprise me when you answer the simple questions I sometimes pose here. One thing that really didn’t surprise me was the overwhelming majority of readers who, when answering the question “have you ever fired a gun” not only have fired one but own several firearms. It didn’t surprise me because I’ve lived in the country. And this is how things are. 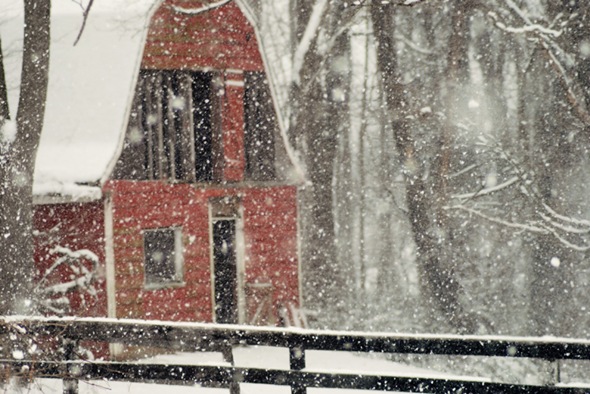 Second surprise: It snowed here today and, in fact, it’s still snowing. It was a nice surprise as we thought the storm was going to be south of us. My husband is already planning his morning which will consist of making his cross country ski path which the help of a best friend he affectionately calls “the black and white”. I don’t think I’ve ever told you that before. 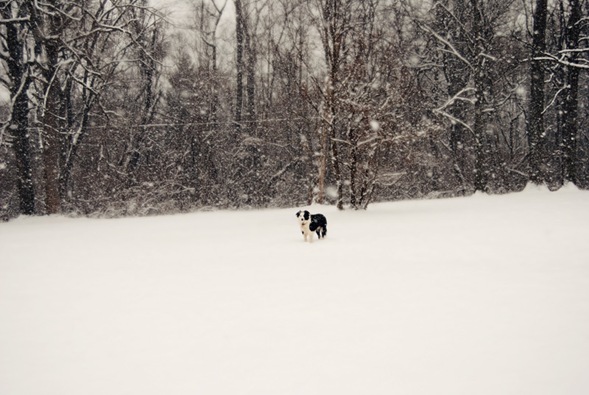 The black and white loves the snow. He’s from Maine, you know.

My husband has been rhyming all day. When there’s rhyming, things are okay.

Oh, crap I did it again. It’s infectious, isn’t it? 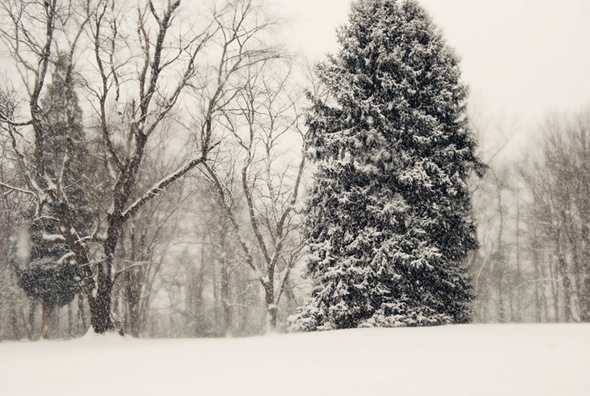 I bundled up this afternoon, put on my sorel boots and hung the camera from my neck, zipping my jacket up over it. I had the 18-55 mm lens on it and the last time I used this particular lens in a snowstorm, I’d gotten it wet. The auto focus hadn’t worked properly since then. It was fine inside but once you took it out into the cold, it would jam. Today was my test run after putting it in a baggie full of rice overnight, advice I had from a few commenters. 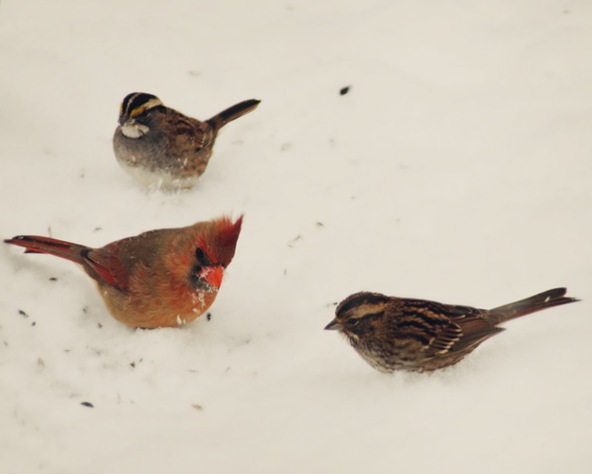 The autofocus works again.  But rice is very dusty. I was careful to set it gently inside the bag. 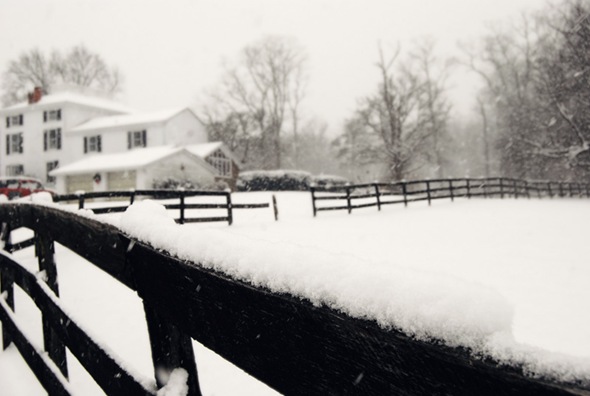 I’ll tell you the third surprise in a moment. I thought of it while I was cleaning today. I decided to clean the upstairs which is now gleaming and fresh-scented. While I was in the midst of cleaning, I kept seeing the same few things I always do and in the interest of getting rid of things that I have no use for, well here’s the third thing: 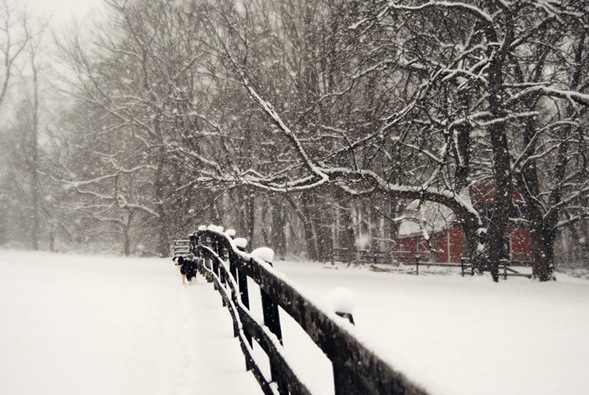 Third surprise: Later this week, look for a giveaway of some of the things I’m ridding myself of. Call me crazy, but they need to go. And I don’t mind spending three or four dollars to ship something to a reader. Here’s a sneak peak of what’s on my list to give away:

L TO R: Beauty samples from DHC, Lancome, Laura Mercier, Smashbox and Kiehl’s to name a few; A rustic coffee mug; Daniel Green bedroom slippers in sz. 9. The beauty samples were all free, and the mug and the slippers were under $10. The slippers were the best deal ever, at about 90% off from Garnett Hill. More details to come.

All photos taken with a Nikon D80

I also rhyme some of the time
mostly when I'm happy
some is silly, some sublime
and quite a few are snappy.

Love todays pics. We got snow too..expected and unwanted!

The photos are absolutely beautiful. I especially like the barn in the snow. "The black and white" is also beautiful in the snow!

I haven't read all of the old posts to know your health problems but hope your tests go well!

Oh geesh, Kate. Those are some beautiful photos. You almost have me convinced that I miss snow this year.. nah!

Glad the auto-focus is working again. I am really paranoid about getting my camera/lenses wet. I got some plastic sleeve sort of things on ebay for cheap - like camera condoms. I believe in safe photography :) Love all the snowy pics - that whole storm is staying south of us it seems. That's ok - we got lotsa snow.

Somehow I missed your post about shooting. I have a carry permit and shoot also. I am the mother of sons and I have always looked for ways to spend time with them as they grew into their young adult years. I go to hockey games and I have a ham radio operator permit! Ha! My husband and his father owned a gun store in TX so I own guns through marriage. ;p

Have a wonderful evening dear Kate. Thank you for sharing your beautiful surroundings.

I must agree with my namesake...you 'almost' got me with those snow pics.
But, nah.

Wow, you guys got a lot of snow! And you got some really beautiful photos. :)

Have you been watching The Princess Bride recently? Maybe you caught rhyming disease from Inigo Montoya...

From the Old InkWell said...

what's your middle name....sweet, adorable, cute, fun, or just too good to be true ?

37C here today and I'm cooling off looking at your snow photos. What a clever idea giving away goodies you don't need any more as a competition prize...
I'm way behind with my blog reading this week but I had to read ALL THE ANSWERS to your last quiz.
Ms Soup

Ah, slippers in my size! :) Photos are gorgeous.. although I am happy to say the snow missed us - this time. -Tammy p.s. of course we, your faithful fans, luvya too!

I LOVE these pictures! I am so jealous of your snow!!! Wonderful idea about the rice & ziploc! Can you tell me if you left the lens cap on or off? I used my camera outside on a really cold frosty day once and the lens fogged up so bad when I brought it inside, it freaked me out, but it went away after a while.
What a cute giveaway! I wear a size 6.5 so the slippers won't fit, but the mug is cute and I am a beauty product junkie!! :)

I'm turning green with envy. O.k. I'm not Incredible Hunk green, but I am at the granny apple shade. I love where you live and I appreciate you sharing it with your readers.

I'm turning green with envy. O.k. I'm not Incredible Hunk green, but I am at the granny apple shade. I love where you live and I appreciate you sharing it with your readers.

Your photos are beautiful!! Glad the rice trick worked!

My four year old grandson rhymes all the time...of course I think he does it because he is just brilliant:)...and happy...and it does get me rhyming with him it is contagious...

I am in love with that red barn shot, snow falling gracefully. Gorgeous.

I love your black and white. :)

As always beautiful pictures. It snowed here as well and we got around 5 inches. So strange for our part of Arkansas to receive snow and not ice. Thankfully though NO ice! Looking forward to the giveaway.

Great shots (of course) - and a hint for you for wet electronic anything: use those little white sachets of granules that come in foodstuffs or with shoes (intended to remove/prevent moisture). I washed a photo memory card the other day in the washing machine - overnight in a ziplock bag with one of those sachets - works like new. Try it!!
:-)
BB

PS I have a little photo challenge at my place... would love you and your readers to take part Kate. No photographic experience needed and no judgement passed. Just a fun gathering I hope!

Wonderful winter snow shots Kate. Why can't we have snow? Instead it's just freezing cold!

Those are gorgeous photos - my favorite is the cardinal and the other 2 little birds.

I used to be an avid bird feeder/watcher until we acquired so many outdoor cats, and now a bird feeder would be inviting them to their death at the claws and jaws of cats who do nothing except play with them.

That's a great idea - to give away the stuff.

Love all your snow pictures! We were very surprised at how much snow we got!

I almost wish I could be watching the snow come down first hand, but than again...nah!!! I do not like cold weather!!!
but I am so glad that you photograph the snow storm for me to enjoy from the luxury of my computer!

Great shots in the snow with the red barn in the background... it's just the right touch of color to an otherwise dismal snowy shot. Snow, for me anyway, generally produces dismal shots... until the sun comes out that is.

Love the cup/mug with the bird. Very sweet!

Love the photos. We've just had a dusting of snow here in Tennessee, a rare event, and I am trying to make the most of it photographically. I DO miss the snow, being a Yankee transplant to this part of the world!co

I read your post and looked at your photos while big feathery snowflakes dance from our sky too!
The countryside looks so peaceful in your pictures, the colors reminiscent of Bruegel's wintry scenes.

Garnett Hill, oh how I miss their catalogues, always such a pleasure to leaf through! I can see the slippers on one of my daughter's narrow feet, lovely.

Kate, love the photos. We have some glorious snow here but I'm one of those to enjoy from indoors. Thanks for your venturing out for us and sharing. Ooo a contest. Love it all!

Your pictures are that of an "absolute winter wonderland". Thanks for sharing. The barn image is my favorite!

I'm on my way outside with my camera in just a few minutes to see what snowy images I can capture. There's no wind this morning, so it's still hanging in the evergreens.

My dogs are greyhounds from Florida, so they're not particularly into snow. Years ago, our Labrador sure loved it!

Wonderful photos, but then, I am never disappointed with your photos.

Kay on South Coast of Or said...

You got a lot of snow too. I hope my niece can find her car when she gets in from Zurich today....She flies out of Dullus...(UAL)...my friend down in Lake Lure, NC also got a "ton" of snow which is unusual for them .....second time this winter... This morning we have bright sunshine so will try to get out for a few shots down at the docks. Have a good Sunday. Just loved your photos today

Again your pics are stunning. Love how George is fooling around in the snow and loving it. Enjoy your new goodies my dear Kate.

...Thanks for making my day! Photos are absolutely awesome - love, love, love the snow with the barn photo up there... :o)

I want to go play in the snow!!

there's something so nostalgic about red barn pictures in the snow ...

I am so loving those birds.

those birds are just gorgeous as is the barn

Luv the Black and White. All the photos are great. The birds are cute!

Glad it was a rhyming day!!!

I was a little disappointed that we didn't get more snow, but glad at the same time because Matt was out camping.

That's a great idea to use some of your unwanted items as giveaways!

Such wonderful piccies here on your blog... I'm just going to HAVE to add you to my blog roll! I found you through Jen at Muddy Boot Dreams, and so glad I did. She did a post on venturing and finding new bloggers... thank you Jen for that reminder to broaden our horizons!

Have a wonderful week!