I had originally wanted to post this last night after working on these few photos and a rousing day spent decompressing from my trip to NYC this week. I actually took a nap in the afternoon – something I rarely ever do – so this was how busy my day was. I did go out for lunch with co-workers to the new Olive Garden in town and I believe it was the single Italian margarita we all had that put me to sleep. My gosh, that thing was good. And they serve it with a shot of amaretto.

And then I watched The Adjustment Bureau. What a cool movie. Have you noticed yet how all-over-the-place this post is becoming?

So let’s get to the photos ~ 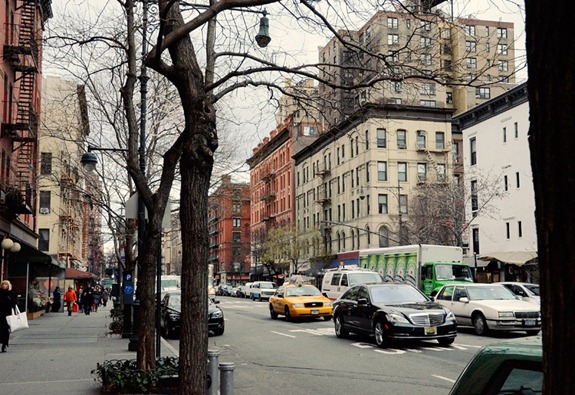 Along Columbus Avenue around 69th Street. 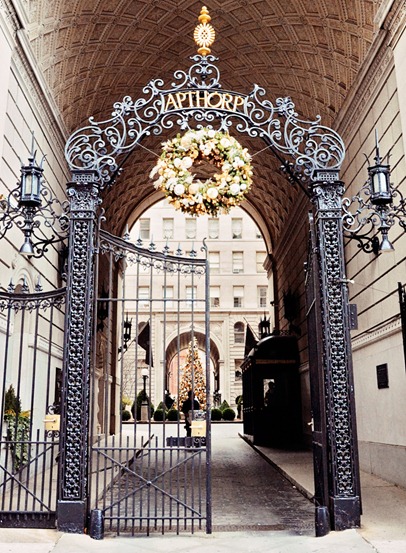 The Apthorp on Broadway between 78th & 79th, is an historic apartment building that was built in the very early 1900’s. 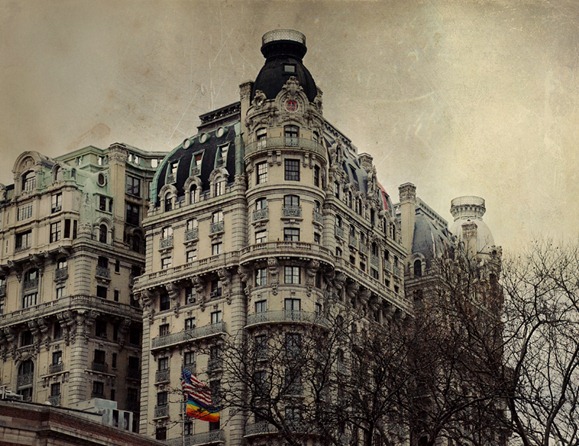 The older buildings are so incredible. I’m not sure where I was when I took this one. I just thought it was beautiful. 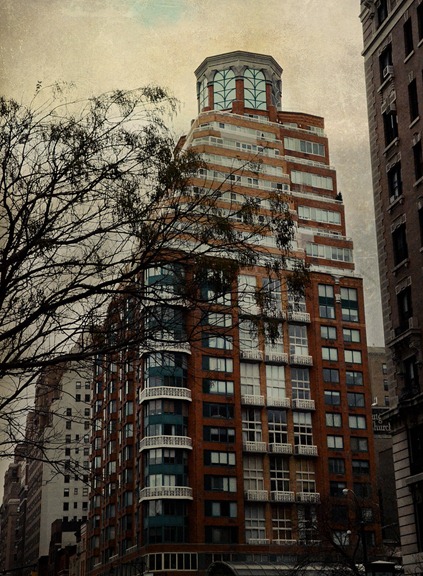 As is this one with its cool water tower (if that’s what is on the top). 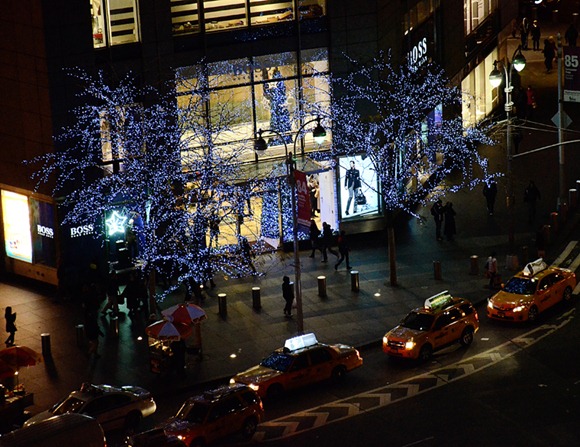 I took this from our table at Robert on Columbus Circle because I was so taken with the pretty trees. 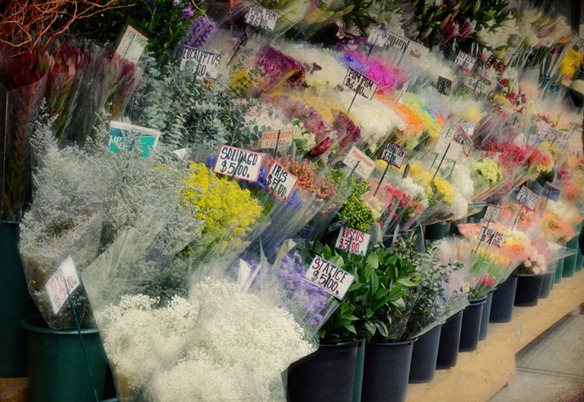 There is so much to see and do in the city.

But I really am glad to be home again in my comfort zone. 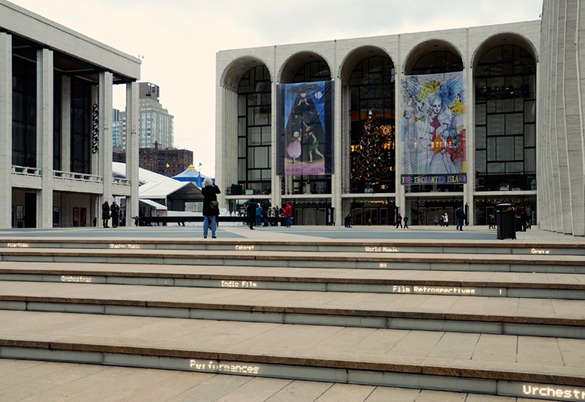 I’ve never been to Lincoln Center, and we didn’t go inside, but wow. We tourists were quite taken with the steps and their advertising lighting that changed every few seconds or so.

There was a flash mob here at Halloween on these very steps this past October that featured Kelly Ripa. Not that I’m a huge Kelly Ripa fan, mind you. But damn, that girl has a lot of energy. And she’s pretty funny. 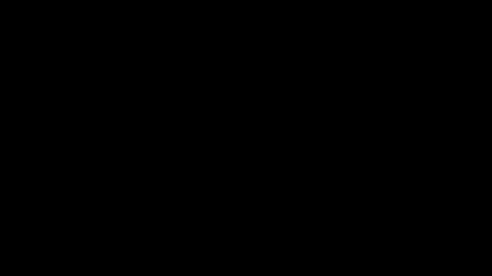 And finally, because I’ve got to shake a leg here, I leave you with this. We are actually having company coming out tomorrow, which is fun. It’s just a very small gathering, which suits my husband well. He can’t take too many people – too many voices. I’ve got cleaning to do, grocery shopping, and maybe someone is getting a doggie bath.

But before I go, I want to wish you all a Happy New Year.

Let’s hope it’s a good one. 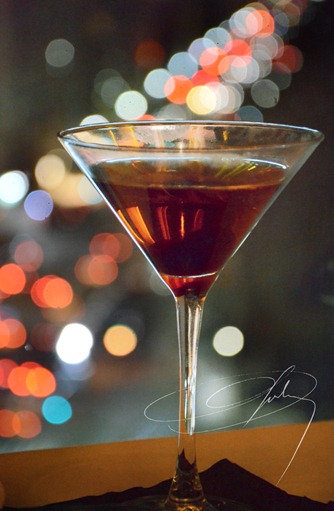 Taken from my table at Robert with the lights of Broadway acting as the bokeh for this shot. The brush is a freebie download from French Kiss Textures that I found somewhere on their sidebar.

Such beautiful photos... you take such amazing shots. I see them and realize that I have to take more time with my camera.
I do think of you and your husband, wondering how you are doing.
Enjoy your quiet weekend. I do remember how important that was for Kenny.
I wish you a beautiful and blessed new year.

Happy New Year! Wishing YOU well and a JOY filled 2012.

I'll have another of those now please...

I have had the pleasure of meeting Kelly Rip a few times, she is adorable and full of energy...that video had me dancing in my computer chair...really!

Your pictures are amazing...

We had our New Year's celebration last night with dinner at the neighbor's house. Greek lasagna. Oh so wonderful. Have a Happy New Year, Kate!!

Seeing bits of NYC brought back memories of 40-some years ago...thanks for the memories and Happy New Year Country Girl. I too am a country gal but still love a bit of 'splash' once in a while.
BlessYourHeart

They sure don't make them like they used to . I love the architecture of old buildings and that Apthorpe is a beauty! Hugs! deb

How I love your photography! How are you and hubby? And George, of course!

I have pix of the building in photo #3 from my visit to NYC a few years ago (at least I'm pretty sure it's the same one). I loved it too & thought the architecture was amazing. All I remember is it was upper west side somewhere!

Fantastic photos ! Happy New Year to you all !

Happy New Year Kate and family...wishing you all the best...hope it's the best one yet!
:)

I'm loving all your NYC photos! My daughter takes some classes near Lincoln Center, so I'll have to show them to her... love the bokeh on that last shot -- bokehlicious!

Wishing you joy in the new year! xoxo

THank you for sharing all those wonderful photos!! Wishing you a very Happy New Year and one filled with hope, promise and better health....

Happy New Year To You and Your Family !!!

Thanks for the trip to NYC! Haven't been there in quite a while. Hoping you have a great New Year!

Thank you for sharing all your wonderful pictures this year. I'm looking forward to all the great ones next year!

Fun times Kate! So much excitement over here for the last day of the year. I'm so out of touch I did not know what a flash mob was. Your pics are so gorgeous as usual. Loved seeing all that amazing NYC architecture. Have a great time with your company. And have a very very very Happy New Year! xo ~Lili

Happy New Year my friend! So love those NYC building pics and how you turn them into art!
Wishing you all the best of 2012 ...xo

I am so happy that 'we' had such a fun trip to NYC! Thanks for telling the story with your narrative and your awesome photos! I am wishing I was sitting here with that gorgeous drink right now!

Hope you and DH have a wonderfully blessed new year! It's all good!
xoxo, Jeanne

Beautiful photos, Kate! Enjoy your New Year company, and cheers to you!

Thanks for another wonderful trip to NYC. Oh how I would have loved to be there with you.

the first of the two buildings, the older one is the Ansonia it was in The Sunshine Boys .. and the one with the possible water tower or elevator works unit is the Alexandra .. the Ansonia is on Broadway 73-74th Sts and the Alexandra is on the corner of 72nd/Broadway .. its entrance is on W 72 St

And I think those flowers were outside Fairway Market.

Love the texture on the Ansonia photo

Kate, that 3rd picture is absolutely incredible!! Does it have a texture on it as well?

Happy New Year, Kate. Thanks for sharing a part of your life with us....

Ahh..... love NY pics!
And that last shot is PERFECTION!

Happy New Year!! Blessings to you and your hubby (and George of course) for 2012!!

Again, so many aspects in this city (at least from the photos you are showing) remind me of Paris. Especially the older buildings and elaborate decorated gates and lamps.

I imagine you didn´t get time to get a photo of the Christmas tree at Rockefeller center. It´s ok, I´ve seen it online a bunch, imagine it´s pretty much the same, even if you were to have taken a photo of it! :-)

Hope you had a great New Year´s celebration! All the best in 2012 Kate!! Hope you have a great year!
Hugs from Norway :-)

Still jealous. Love my NYC memories and cherish those pics (are they double backed up?)
;-)
BB

Happy New Year, may all your dreams come true.

Beautiful, beautiful images, Kate but I especially love that last one. Happy New Year to you and yours.

I've enjoyed the sights you have shared of the city. I'm a country girl at heart, too.

THose old buildings are incredible, aren't they? Oh, to tour a few of the apartments.

I love old buildings...they do have some beauties in NY....

Hi I love the cool photos of the architecture. And I especially love that last photo of the cocktail. Happy New Year.

And a Happy New Year to you too Kate!