I woke up earlier than usual this morning, my room bathed in a crimson glow. Looking out my window, I saw that the sky looked incredible. I also knew that it takes only seconds for it to change and by the time I decided to get up, then get myself downstairs and the right lens on the camera, less than two minutes had passed and it had already changed to this orange and lavender color.

It really is beautiful, but I remembered the old adage: “Red sky at night, sailor’s delight. Red sky in morning, sailor’s warning”. This old saying is one I’ve always found to be true. 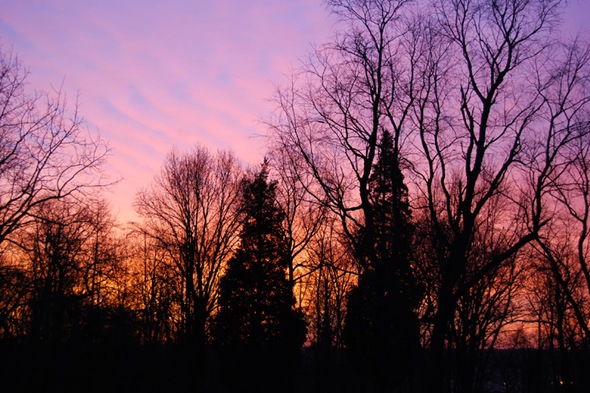 A red sunrise reflects the dust particles of a system that has just passed from the west. This indicates that a storm system may be moving to the east. If the morning sky is a deep fiery red, it means a high water content in the atmosphere. So, rain is on its way. (Excerpted from Fun Science Facts by the Library of Science). 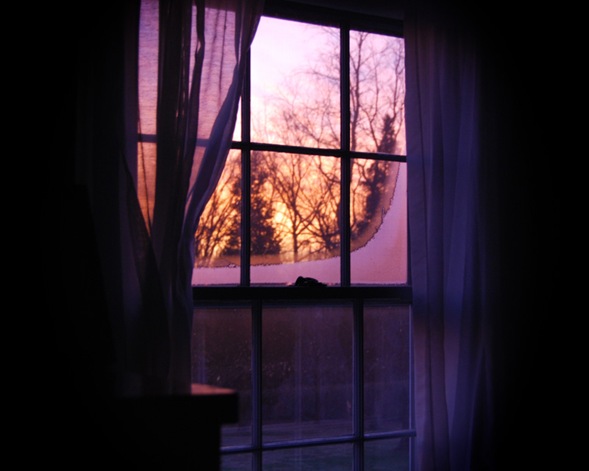 I came back upstairs and shot this photo from my bedroom window.

Today was spent doing mundane chores in the morning and then a surprise early-afternoon appointment at my favorite hair salon. I say a surprise because I only called to see if they had anything for next week or the following, and was shocked to find that they had a cancellation so close to New Year’s Eve. First though, I had to make another visit to the dump to take all the recyclables. My husband packed the car and George hopped in for the ride. I wore my fashionable new Carhart vest to the dump then to the fancy pants salon.

While at the salon, I sat in a chair along a row of other women who were having color done. The colorist to my left was talking to her client, telling her about her step-mother who she seemed to like. She was glad she married her dad but was saying what a kook she’d gone out with before she met him.

As I sat there, I realized that one of my friends was dating this very same kook. I finally excused myself and asked where this person was from, and what he looked like. And that confirmed it. Gah!

I drive half an hour to get to my hair salon, which is outside of Wilmington DE. Whouda thunk?

So what are your plans for New Year’s? We’re just having a quiet one here.

To learn more about weather lore and proverbs visit the Fun Science Facts by the Library of Congress.

What an awesome beginning to the day ... just a quiet New Year's Eve here

Actually, I was thinking about getting my hair done, but then realized I might be the kook everyone is talking about :)

From my house to yours, here's wishing you a very happy New year, sweet Kate :) May all your wishes come true...

just goes to show you that you better watch who you are talking about because ya just never know how things come back atcha!

So my question is, are you going to tell your friend that her boyfriend has a reputation as a kook?

Well, I guess the gossip that you hear about with hair salons must be true! LOL Your pictures are so pretty...I hear there is to be a BLUE MOON on New Years Eve...keep that great camera handy! Come say hi :D

wow, beautiful sky! are you getting rain or snow? we're supposed to get both... :(

i've got to get my hair done soon -- starting to look like a rat's nest... i spent the day cleaning out the guest/junk room. will have a quiet new year's eve. my son goes back to philly tomorrow... :(

It is a small world and oh, the secrets we learn, when our hair is done.

Beautiful pictures! Was it windy today?

I'm being quiet too

We're planning a quiet new year's eve at home. Just us, a pizza and probably a dvd or two. I'll have the best company I know, my hubby and my cat. I doesn't get better than that. Anyone gagging yet?! Happy New Year Kate, hubby, George and Kate fans!

Thanks, all. And yes, Michelle, I'm going to tell her what I overheard. I'd want her to tell me. Besides, she's not really serious about him. Or so she says. Oh, my.

Happy quiet New Year to you. Mine will be quiet also.Your sun rise is magnificent.
My photoshop should be here sat. I can hardly wait.
~~Love Hugs and Good Thoughts~~

Stunning sunrise. Small world under that sun, isn't it? Quiet, intimate new year's eves with a roaring fire, a glass of champagne, quiet time to reflect and someone you love...what else could one want?

...Can we see said Carhart vest on gift recepient please? I wear a parka style Carhart coat with a faux fur trimmed hood...see, kindred spirits you and I...lol ;o) Believe it or not, I've had it on when stopping in to shop at the shi-shi-poo-poo shops and women have asked me where I got my coat - no kidding! It's funny when I tell them, "oh the local feed store". lol... I love it, it is very warm... :o)

That photo from the window is so fantastically lush. Beautiful shot. And ain't life's little reminders of how small this big world really is always a hoot?

Kate, dust particles, high water content in the atmosphere, and all this time I thought it was Santa baking Christmas cookies. Well burst my bubble. My life may never be the same! But it is nice to wake up to a scene like that, nice picture.

Beautiful photographs of your sunrise! Thanks for getting up to share them with us. Also...thanks for the giggle. That's a funny story about the guy. ;-)
Happy New Year!
Donna

Those who sneak always get caught...and that's really really good!

If those gorgeous pictures were taken this morning (and they are truly gorgeous), I was driving over the Coleman Bridge which connects Gloucester Point to Yorktown just as the sun was coming up, and thought to myself..if only I had the camera. The reds and oranges were spectacular on the horizon looking east. (If you tune out the oil refinery down from Yorktown.)

Love that second one with the frost on the windowpane.

Hi Kate...I just had an enjoyable hour catching up here and needed to let you know how much I enjoyed it....Your photos are amazing...I love all your snowstorm pics...and the music to go along with them:)

...Just love the pink frost on your window!

There is something renewing about going to the Salon. I find I hold my shoulders back more and don't slouch so much, there is an air of Mae West about me when I've had a proper trim and wax. Seems quite fitting for the New Year don't you think?

I agree with you on the old adage - I have always loved it too and found it to be true.

It's already 2010 here! So HAPPY NOO YEAR! (That's me trying to speak American... sorry) We spent the night at a neighbours place and watched some illegal firecrackers go off (to the kids' utter delight). Then hubby and I watched the 'big' fireworks on the Sydney Harbour Bridge on TV. Well I did - hubby snored.

Love your morning photo - did the rain come as predicted??
:-)
BB

Its SNOWING here .. HARD .. hahahaha .. I suspect Times Square will be less densely crowded tonite .. we will be here in Casa Edelstein with some nice red wine and a lovely Prosecco for toasting at midnight if ToonMan can stay awake ... otherwise its me and Rosie and the TV

Last nite we saw The Informant and I have to say it was funnier than In Bruge which was not a comedy either .

Small world in those salons!

Love the new header! My George!!! And kooks are everywhere. Everywhere. Quiet night here at the Mental Palace as well;)

Wow the pictures are beautiful of the sunrise and gorgeous sky! Did it rain? Not a lot going on in the desert this New Year's Eve. A quiet night at home and watching the New Year come on all around the world on tv, then a kiss for good luck and off to bed at midnight!

That's just beautiful. I love how the colour bled into your room like that.