It’s late as I write this. I had an appointment at the end of the day and didn’t get home until much later than normal and now we’re in the midst of a thunderstorm and George is trying to climb on my lap.

I can type now because he’s gone over to my husband’s lap. Mine is infinitely better, though. It’s so much softer. 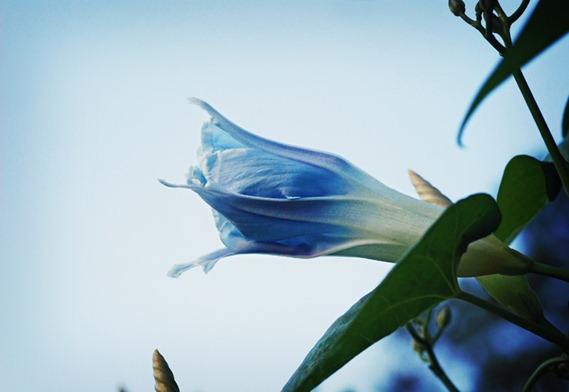 This is the blue.

I’m trying to catch the morning glories in all their phases from the time they wake up until the time they go to sleep. And then I’m going to put them all into a photo book. 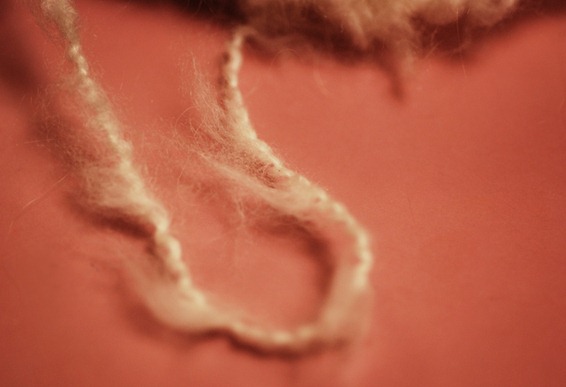 And this is the pink.

A reader sent me an e-mail asking what type of white yarn I was using for my newest knitting project. I’ve had the yarn for several years and threw away the wrapper long ago. I responded to her question, trying to explain the yarn, but ended up saying that I’d just take a photo of it so that she could see a strand. So here you go, Gayle from San Diego!

Hope you like pink countertops because that’s what’s in the background.

And here comes George back on my lap. (The thunderstorm has gained in intensity).

Anyone watch Survivor tonight? I love watching this show with my husband. Holly went a little cuckoo for cocoa puffs on this episode but maybe it was just the game getting to her. After a pep talk from Jimmy Johnson, she decided to give it another go rather than quit. This was after she admitted, in front of the whole tribe, that she filled NYC Dan’s $1600 pair of shoes with sand and dumped them in the water. I think she felt good immediately after ruining the shoes, but then the guilt got to her.

My favorite line tonight, the one that made us both laugh out loud:

“Holly, she keeps gettin’ crazier and crazier. So you know what I’m gonna do? I’m gonna keep one eye on her and the other eye on m’shoes.” ~ Tyrone Davis

Thanks for stopping by. Until tomorrow, my friends . . .

PS ~ Dawn needs help with naming a photo. Actually, it’s her daughter who needs the help. She wants to enter it in a contest and it needs a name. Anyone care to lend her a hand? I’m sure she’d appreciate it. [Here’s the link].

I love morning glories and I really love your photos of them.

That blue is sooo pretty.

That episode was hilarious. $1,600 shoes on a reality show - he needs a major reality check. Or a lobotomy.

I still love those pink countertops.

and then shannon packed his own bags while he was sitting in tribal council....what a moron !
he was such nice eye candy....LOL

people who understand the meaning of life=one

oh this will be a good season :)

Hi Kate:
I went and looked at Dawn's photo, but I don't know her, so she might misinterpret the only thing that came to mind..."Laughing my ass off". I figured I could share it with you because you...well, you get me! lol

I love the idea for your morning glory book. It will be wonderful.

Oh, that Holly. And oh, that Shannon. And oh, that crazy Nay. This season's Survivor is full of sound-bite machines. That being said, I still think I love Tyson most of all. I hope that George lets you get some sleep!

Survivor gets crazier every year, have watched from the very beginning....can't stop now! Love Tyrone's line, so funny!

Thanks for the close-up of the yarn. I like it, will find some and knit more stuff.

Your photos are wonderful.

I'm still not sure I like the idea of "old vs young" truthfully. When the challenges start getting more physical or stamina based, well... let's just say, some 20's have the distinct advantage. But, it's fun seeing Jimmy Johnson there!

We had a wild storm last night too! Thunder makes one of our ponies very nervous...glad she did not climb in my lap!

Oh morning glory book! I'm so there. Love it.

Survivor...yup watched it. Oh my it is going to be interesting isn't it.

That would feed a family of four for months.

I couldn't believe it about the shoes either...both the buying them and the bringing them. This was definitely a funny shoes and socks episode:) This is one show that Mr O won't watch with me tho...I do miss laughing with someone about it:(

Your morning glory book will be beautiful...hope you plan on selling some:)

I really like the morning glory. And, your plan to make a book. I need a plan like that...

I haven't watched tv in nearly a year. I don't miss it.

Poor George. He's such a sweetie. It's too bad our animals can't appreciate the magnificence of a good thunderstorm.

yeah...i would never bring that kind of shoes to survivor. i would go to either sears or walmart and buy totally expendable clothing that i didn't care what happened to them. that is crazy behavior on her part - i hate to say i missed it last night - can't wait to get the dvr.

Morning glories are so pretteh! A photobook sounds like a terrific idea :D

Aha! George does have a fault! I was beginning to think he was perfection on 4 paws! :)

2 of my 5 have a fear of thunderstorms. I wish I could do more to alleviate their fears than just be there for them. :)

Your photography is stunning and your uplifting "respite" is just wonderful. Thank you for such a wonderful blog - and of course, for sharing George with us. :)

Hi Kate, gladd you had a fine day.
And that show you're talking about,....never heard of it but it sounds a little crazy to me though. And you are so right about the shoes.

ps did I mentioned I love your new header, well I do.

And pps how is your brother holding up? Hope things are fine.
Hugs D.

Don't watch that show. Can't get into some of them.

Luv your pictures, the book is going to be great.

loved my visit here with you today..i watched George in the fast and furious video..he is a cutie....

we will stop back by soon

I wonder about the thunder...I have heard of a lot of Borders that fear it. Maggie will climb the walls to get to someone when it storms.

What a pretty book that will be, your morning glory images are always stunning! Gosh I haven't seen Survivor in years, well actually it was probably just the first year it was on, I never get control over the clicker anymore... ~Lili

My Gracie doesn't like thunder either. I have to put a dark-colored throw blanket over her. She
still can hear, but not see it...it settles her down.

Love morning glories! I would love a coffee table book of Glories by Kate!