One of the comments I received yesterday concerned the photo you see below, which gave me an idea for a blog post. “. . . But, that last shot--with the old wheelbarrow, (and that is some HEAVY wheelbarrow)-- is kind of mysterious. Makes me want some exploration and it makes me wonder what I'd run into if I could step into the trees back there! It has lots of depth and so many different colors of beautiful greens and grays.” ~ Bluebird

Although the light is much different in the afternoon, I decided to take a walk through that very gate with the camera just to show you what you’d run into if you stepped into the mysterious area of trees back there. 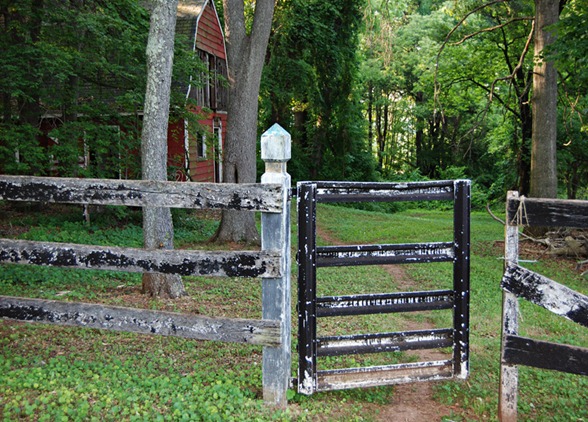 Please try to contain yourselves.

And pretend you don’t see that fence there on the right that’s being held up with twine. Thank you. 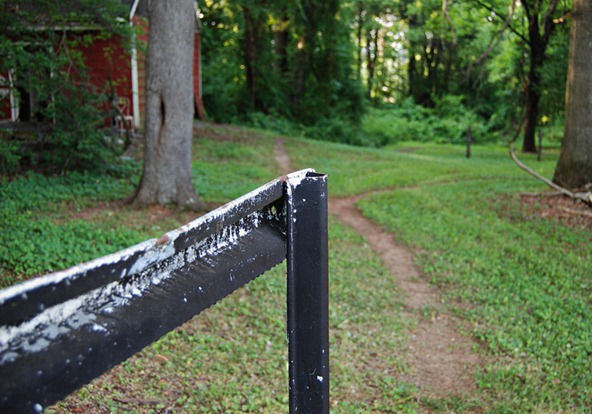 The trees and the growth along the edges you see straight ahead are wonderful for hiding the development that lies back there.

Over the weekend, I had to go inside rather than listen to what sounded like a two year old girl having herself a melt-down, after having been sent out of the house to cry in the backyard.

It took her well over an hour to finally cry herself out. I know this because for an hour, I kept attempting to come back outside to read. At first, I thought she was hurt. But I know a temper tantrum and a strong-willed child when I hear one. I will say though, that I’ve never heard anything like this so close by before.

TMI perhaps? So sorry about that. Moving along . . . 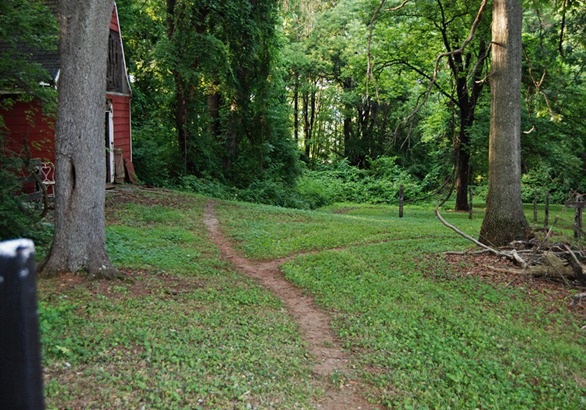 That’s one of the inner loop trails that goes off to the right there around that tree.

Nothing much is left in the barn, other than some junk, an ancient riding mower, and the pungent scent of times gone by. 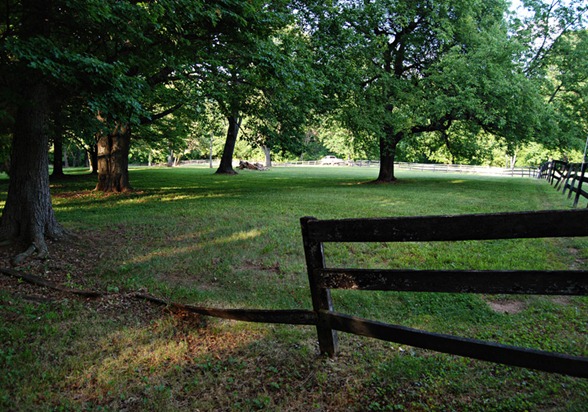 Looking to the right of the gate and the fence that’s still hanging on. This used to house the owners horses back in the 70’s, I believe. 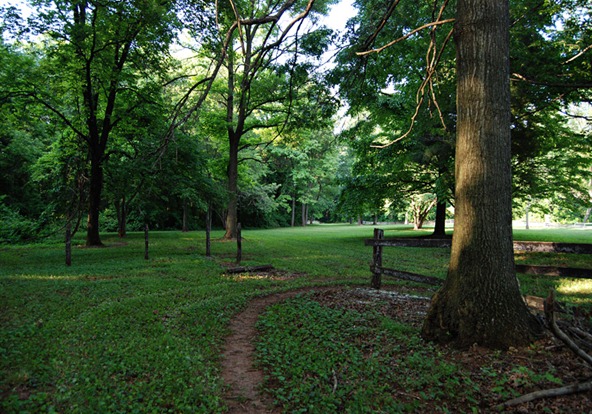 This area stays nice and shady most of the day, and is always full of birds and squirrels.

Speaking of birds, I’m sorry to say that the bluebirds have taken off. I guess their babies were old enough to fly and off they went for parts north. 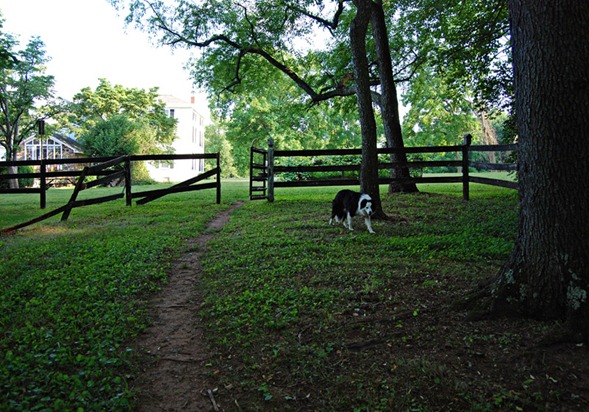 Looking back toward the gate, I remember a frosty photo I took back in February 2010 after an epic snowstorm, which was then followed by an ice storm. 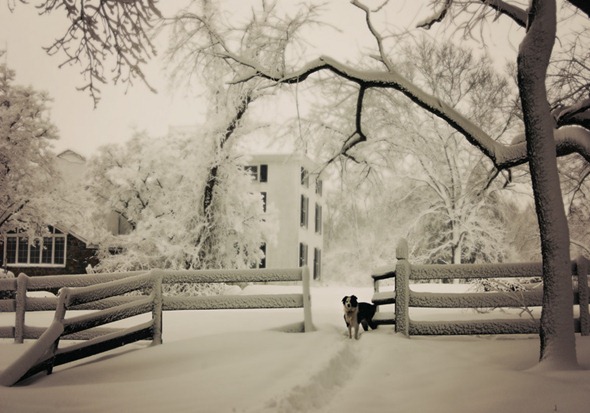 I have this printed on metallic paper and it looks really cool.

Hope this solves the mystery of what lies through the gate. Or perhaps I should have left it be a mystery . . .

Enjoy your week ~ hope it’s a pleasant one.

Such a beautiful place you inhabit. Well, except for the crying kid. :)

This was great, Kate!! Love that you had a winter scene to match :)

I do love that first photo (and the last!) The barn looks pretty cool too! I would love to go 'explore' in there and check out the 'old' stuff!

Thanks for taking us on the tour beyond the gates!

That winter scene is so pretty. I would love to have a garden gate that lead to this!

I loved this idyllic stroll along the pathway and into the green. And, we DO forgive the twine holding the fence together. We're all just so happy to be in nature with you.

My goodness...how lucky you are to have that! Love the "Y" path...so cool!

...I love this! Those trees do a good job of hiding whoever lives back there, I don't see any sign of a house or a building. I wonder how many original acres were with the house back when it was originally built... You do have an awesome place there Miss Kate! :o)

...And thank you for providing the winter photo too - that is so beautiful!

I have a 9 year old granddaughter that STILL has temper tantrums like that about once a week. Yes... I said 9 years old... don't ask. *sigh*

Thanks for posting the pictures behind the gate. Looks so peaceful. So wonderful to be able to have some space outside to enjoy. Kind of reminds me of a farm outside of Chesapeake City, MD where my daughter took riding lessons as a child. I just absolutely loved going there to wander around the property while she was riding! Felt like a mini get away.

I loved this tour! Let's go farther when you have the time!

That 'strong willed child' made me think of myself. There were many days my mom scolded me and sent me outside and I had a temper tantrum for a good house just to prove whatever point I had to make at the age of five. haha.

And I can see why you have a print of that last, wintry photo. I love it too!

Going on walks with you is always relaxing. Thank you for that.

I really enjoyed the stroll and even the reminder of that storm. Our then 17 year old girl thought about throwing a tantrum when the task of digging my SUV out of the snow fell to her because I'm too crippled and her mama's too small. Her attitude abruptly changed when she realized we'd need my Expedition to pull her Jeep out so she could go romp in the snow with her friends:)

Oh my--how that DID NOT DISAPPOINT! The trees back there are awesome, aren't they--with all the shade. Some of them look so old. Mama used to get me to go walking in the woods behind our house a lot when I was little--I wasn't having a tantrum. I think she just wanted a little time to think--otherwise entitled, "WHAT WOMEN DID WITH NO TV!"

So nice!! I looked hard and couldn't see any sign of houses so you surely are well hidden!
I know that summer has just arrived and I'm truly grateful for the 100 degree heat here in Louisiana (not!), but that winter scene was just awesome!

thanks for taking us beyond the gate... what a most beautiful and poetic place it is; too bad it was interrupted with a 2 year old melt down.... they really shouldn't last that long.... that is annoying..... (I have a 4 year old so I can say that....) love the dreamy frozen scene

how very wonderful. I would love to explore your place.

sit with you , tantrum in the background or not.

Thanks for the tour. It's fun being on the "inside."

I know you read all comments and I know how much I appreciate an occasional email in response to a comment I made. The other side of the coin is, that I read your blog every day, (actually, it's the first thing I do after the computer boots up) but don't have time to comment as much as I'd like. So I think we're even! Let's just keep on doing what we're doing!

I had no idea there were people that close....It's still heaven-on-earth there.

I love the story and the pics. I would not be happy having to sit outside listening to a wailing child either. I think I am getting old and very intolerant.

Tall shade trees, green grass all around, a gate to go through and take you to a quiet place (minus the crying little one)--what a lovely place to be! I love the winter shot too-cold,snowy, and icy as the weather was, it stills makes for a lovely photo. Have a great day. Mickie :)

awesome...... what a great post and a wonderful idea from the commenter. Love the twine, gotta use whats on hand. and the summer winter photos, both with George, great!
peace n abundance,
CheyAnne

Oooh, thank you for taking us on this beautiful journey. That's a child's paradise.

Oh, I'm so glad you took us on that small exploration. I have a "thing" for photos of paths and roads and even streams and rivers -- anything that promises discovery...

I, too, loved that first picture, and I also treasure that last snowy shot. It is currently hanging over my desk. :)
xoxo

mystery solved !!!
and of course it's a drop dead gorgeous mystery....dang that property....it's just so fantastic !

how nice of George to help you replicate the snow shot .. yesterday someone stopped me on the street to say 'is George your dog?' .. at first I had no idea WTF he was talking about, I thought this is a new pick up line .. then I realized I had the I Love George button on my big pink tote bag .. I replied, 'no but I am his Aunt.' I wonder why he backed away from me like that?

I liked seeing what was behind the wheelbarrow.

What a delightful walk. Thank you for taking us along.

Beautiful photos as always! You are blessed with talent.

Re: Children crying. I ran into two on my trip. They weren't crying crying, they were just pretend crying so that they could get some attention. Evidently it wasn't the first time as the parents had tuned it out completely.

Nice to take that walk with you and George! I love the photo with snow and the one without! How blessed are you to live there and tend to that house...if only walls could talk!

Beautiful spot and that winter photo almost looks inviting on a hot day like today.

That was fun to get a tour of the grounds. It's so serene and I bet the air smells wonderful. As much as I'm into the warming weather right now, the beauty of that snow scene with George gets me every time. xo ~Lili

His Song to Sing said...

Beautiful post, Country Girl. Oh to live in such a place with gates and woods and scenes like this to explore. Yet each of us can gain access to "mysteries" like these through blogs like yours and even our own inner landscapes if we are looking hard enough. I have started and stopped reading many blogs in Blogland but your beautiful pictures and honest depictions of your everyday life keep me coming back for more.

Kate that is a beautiful side yard, I love the paths created from walk abouts.

Wow...just WOW! Thanks for the little trip :)