I stopped at the local WalMart today to get a few supplies and while walking by the pet aisle, I realized that it had been a long time since George had a new toy. And who doesn’t love a new toy every now and then, right?

I wish I had the camera out when I came home and told him there might be something in the bag for him. He was so excited, he began leaping into the air while I cut the tag off. 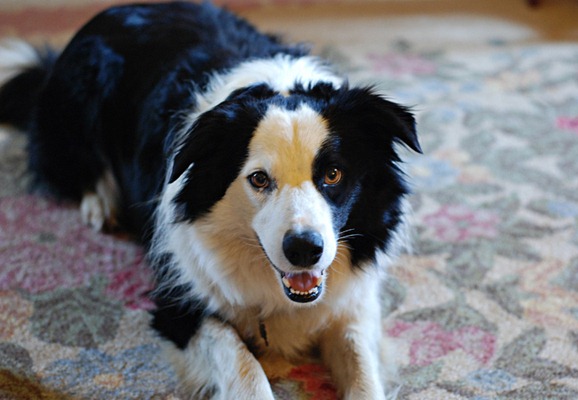 Of course, he wanted to play with it right away. 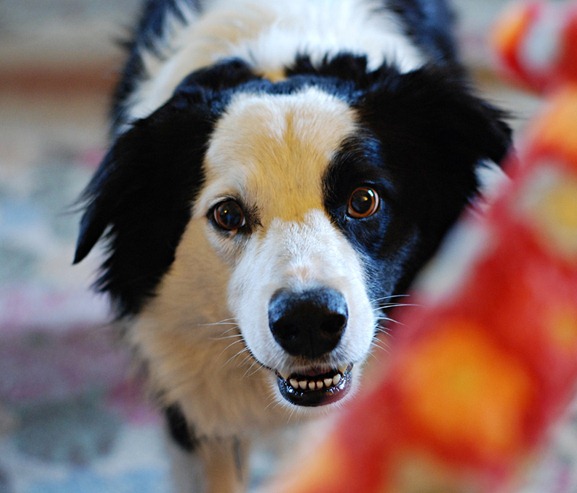 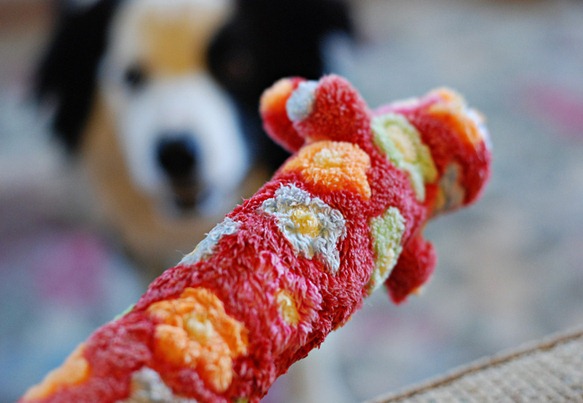 Super exciting for the black & white.

For those who are visiting here for the first time, I will tell you now that it doesn’t really get any more exciting than this.

But that’s ok with me. 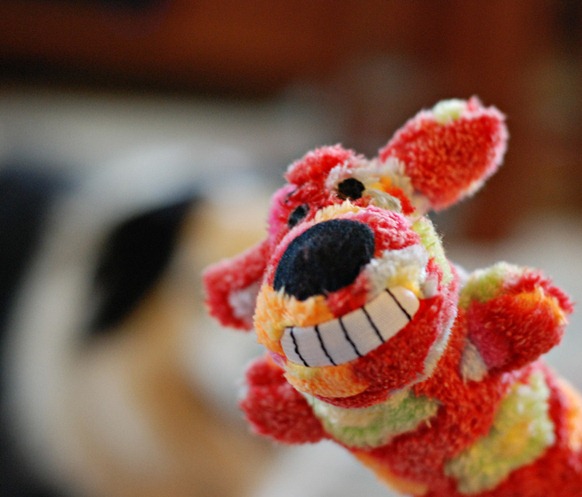 The AC is on, a Phillies game is on the tv and is keeping my husband entertained, and George is now napping at my feet, his new toy close by.

The new toy with the Gary Busey teeth. 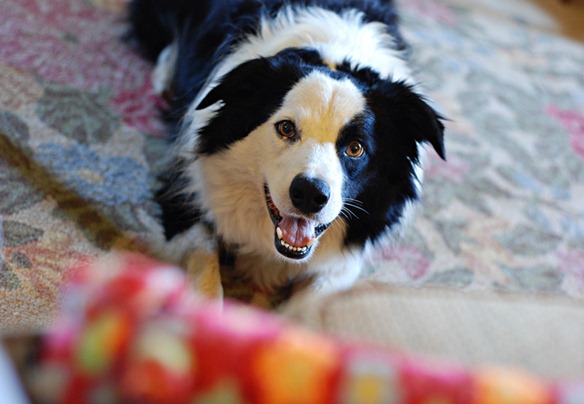 I think we’ve found our name for this one. 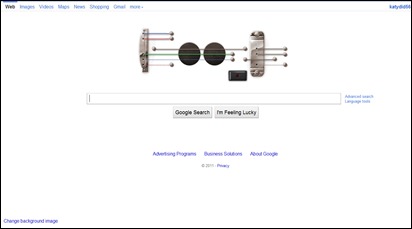 I didn’t know this until this evening, but if you visited Google.com today (June 9), you were in for a treat. In honor of the 96th birthday of Les Paul, the folks at Google came up with one of their interactive doodles. This one allowed users to strum an electric guitar. It was really pretty cool ~ and if you’re reading this late at night, check it out.

Have a great weekend, all. Hope the heat lets up some.

ahaha the second picture-his expression! I love it!

GARY BUSEY.....i just laughed out loud over that one....and hey, anybody just stopping by for the first time.....what took you so long :)

Gary Busey teeth--how funny, but I can see the comparison. George is such a "handsome" looking dog. Glad he is enjoying his new toy--everyone deserves a treat now and then. Have a good weekend too. Mickie :)

Love Les Paul and that was one of Google's more creative nameplates. LOVED it!
Also love George's new GaryB toy. :)

I spent a good 5 minutes playing with the Google logo and made quite the relaxing melody. :)

Oh, and my puppies have TWO of those toys. They love them. Then inexplicably kill them by removing all stuffing and squeakers after a few weeks of play.

Ha! I just bought the exact same toy for my dogs the other day. Within 2 hours the little one had ripped the squeeky toys out and is now proudly dragging his Bo-Bo all over the house. Why we named it a Bo-Bo I have no idea. It just seemed to fit!

George looks like he's about to come out of his fur he's so excited! 'Hurry Mom, what is taking you so long to give me my new toy?' He makes me smile! Thanks!

ha! george is so cute... you gotta love a new toy!

my fav is the 2nd pic but they are all good photos. very cute dog.

cool on the google! did you notice the record button where you could record your strumming?

Jack will get the stuffing out if George needs any help!

Tess loves new toys too - her favourite at the moment is a snowman squeaky toy. Loved the way you kept that face a secret until the end.

I'm thinking you get that look from George quite a bit:) He is a very photogenic pup!
Maybe your life isn't exciting but it's always a pleasure to visit here. Soothing and relaxing. Like a cup of tea at the end of a long day. :D

This just made me laugh! We could take lessons from George...find pleasure in the simple. Go George! Enjoy!

Such great captures of George and his new Gary Bussey toy. I could picture the whole anticipation thing with George too. Makes me want to get another doggie. xo ~Lili

That may be my new favorite toy. Gary.

...You know, I saw that lil' Google guitar thingy yesterday and had no idea of what it was about and that you could actually play the thing. And did you know, that if you press the little red button on the bottom right it will record your little music diddly for you to play back? Annnnd, it will provide you with a code so you can embed it? Really. I gave a 'shout out' to you & George on my FB Page for enlightening me with this new toy! Thank you! :o)

...And speaking of toys, I bet that the toys we pick out for our little fur babys speaks volumes about us as individuals. Take the one that you chose for your dear B&W, it screams humor, color, light heartedness and fun. Seriously, a dog toy that resembles Gary Busey?! lol :oD At any rate, I love it! ;o)

...Thanks for the laughs & the smiles - it's always a joy visiting here!

That toy reminds me of that treats commercial where the dog 'says' BACON!

I LOVE everything about this new Toy! What a great un-birthday present to receive.

I have to go to Wal-Mart today for the first time in months... maybe I'll break down and buy Attagirl a new toy.
But really.... enquiring minds want to know.... how does George stay so blindingly beautifully white!!!!?

Those teeth are a hoot!

I'll have to check that toy out for Duke. He love his squeak ball, & jingle ball, so I'm guessing he'd like "Gary" too!

Doogie would love a new toy I'm sure - but his toy basket is already overflowing!! Not that it's an excuse to not get him one... I got him new treats today instead - he was VERY happy! Great pictures!

Now that I've had my George fix for the day......
Love his new toy. Gracie has one that is fushia pink and we call it her Mo-Mo!!! I quite like George's...very colorful and love the grin!!! Have an awesome weekend, my friend!

This level of cuteness really should be illegal! ;-)

Kate this is so so funny and cute. He is just priceless and so are you.!!!

That's just the happiest face I have ever seen on a toy that is headed into the jowls of a pup. He seems very happy about his job. LOL

Hope your weekend is wonderful.
xoxo

have fun George! that is a cool web site...it records for you too.

He has such a great 'smile',doesn't he! I mean George-he looks so happy all the time--and I can see why. Who else gets dolls with Gary Busey teeth!

I wonder if youall got rain where you were Friday night..we finally got a much needed almost inch of rain--it was parched here.

I wish toys lasted here, but my leos destroy them as soon as they get them with help of the little Aussie monster who thinks toys should NOT have stuffing...ugh!!

Cute pictures of the dog. Richard from the Amish settlement of Lebanon,Pa

Hooray for George and his new toy :)
And I loved that Google Doodle the other day!!

This had me smiling as much as that Gary Busey toy!!
xoxo

I do believe we have purchased about 20 of those little hotdogs for our dachshund over the years. It's his most beloved toy. We've had it in all colors, even a statue of liberty and halloween style! I have not yet seen the floral version till now :-) It's the little things, you know.