It’s no secret how big a fan I was of Bruce Springsteen and the E Street Band when I was growing up. I can’t even begin to tell you how many concerts I attended and some before they became really famous. Growing up in NJ, we were the first in the country to hear of the phenomenon who would later become The Boss. But it wasn’t until The Big Man joined the band in October 1972 that everything changed when that distinctive saxophone element was added. Clarence Clemons and Bruce Springsteen would become history.

Clarence Clemons passed away on Sunday at the age of 69, a week after suffering a stroke. I love the story he tells of the night he met Bruce Springsteen:

"One night we were playing in Asbury Park. I'd heard The Bruce Springsteen Band was nearby at a club called The Student Prince and on a break between sets I walked over there. On-stage, Bruce used to tell different versions of this story but I'm a Baptist, remember, so this is the truth. A rainy, windy night it was, and when I opened the door the whole thing flew off its hinges and blew away down the street. The band were on-stage, but staring at me framed in the doorway. And maybe that did make Bruce a little nervous because I just said, 'I want to play with your band,' and he said, 'Sure, you do anything you want.'

"The first song we did was an early version of Spirit In The Night. Bruce and I looked at each other and didn't say anything, we just knew. We knew we were the missing links in each other's lives. He was what I'd been searching for. In one way he was just a scrawny little kid. But he was a visionary. He wanted to follow his dream. So from then on I was part of history."

The Jungleland solo from the Born To Run album (1980) is, for me, Clarence Clemons’ signature piece. I found this on YouTube, newly posted, but I thought it was interesting with the different camera angles. You can even see the name on the saxaphone. Don’t know when this video was made, 2009 maybe.

The last time I heard this solo, and the most memorable, occurred just over a year ago, driving east from New Orleans one night, along Route 10 in Mississippi. In the car were friends that my husband and I had known from the old concert going days of our youth. And for one magic moment, the music took us back. 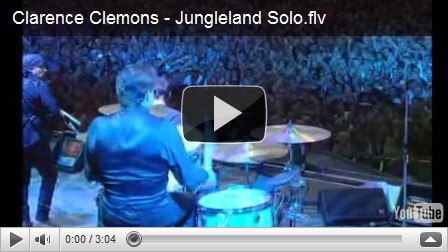 Years ago, that would have been me, in the 3rd row there, waving my arms to the music. I can still hear it now.

a true talent and a huge stage presence. very sad that he is gone.

I didnt hear about that till your post ! Thats a shame , his talent will be missed ! I was a preteen when they hit it big !

He was such a great musician and will be missed. I'm a huge fan of The Boss and the E St. Band!

Amen. Such memories from the music....

Nothing like the sweet sound of the sax. That was nice!

So many of the great ones are leaving us. ~sigh~ But, oh, such sweet memories we are left with!

Thanks for posting this. 1000memories created a tribute site for Clarence today - http://1000memories.com/clarence-clemons - thought you'd appreciate it.

...chills. music has such a imprint to our story. i think i was with you in that car. i know the joy you all felt looking at each other, being taken back. bet you wave your arms some. love the music.
bv

My goodness he was awesome!!! So sad he's gone. Dang...what's up with everyone daying!!!??? I hope he is up in heaven giving Char a personal concert!!!

I grew up just over the bridge on SI.. yes, they were legendary and all these years later still did that thing that they did.

Thanks for the music. Wave on!

We feel the same here in Oklahoma. Thanks for the post...great story of history/something special in the making.

Thanks for sharing your story with everyone. Richard from the Amish settlement of Lebanon,Pa

I saw this on the news last night.

He was a great performer. Seems like their destiny to me.

Well, Kate, this is where you and I part ways. I have never been and will never be, a Springsteen fan. I hope we can still be friends. *smile*

I did thoroughly enjoy Clarence's solo. The man was clearly doing what he loved, with passion. So sad when anyone passes. Nice tribute.

Jungleland is indeed the big man's signature and I just have never been able to hear it enough.

Did you see him play "On the Edge" with Lady Gaga on the American Idol finale? I never was a Lady Gaga fan until then...Clarence Clemens was an amazing musican...

A major piece of the band is gone, it will never be the same, so very, very sad. He was way to young.

Music is such a powerful reminder of our youth, and his was simply the best. I only saw him live once, but I will never forget how the entire stadium shook with the pounding of feet...

What a sad day for all of us. He will be missed.
xoxo

I knew I liked you for a reason...Bruce is my man and there was no one better than Clarence. My FlyBoy cried. He was born in NJ and is a big Bruce fan too!

made me sad when i heard this on Nightly News the other night...i was cooking in my kitchen and it stopped me cold......

What a gift it is to convey soul, spirit, and love through an instrument. The Big Man did it so beautifully.

Thanks for the video. It brought back great memories and a few tears.

The Big Man joining the band did make it happen. I too loved Jungleland and happened upon The Boss before the popularity of his later years, friends in VA introduced me to him. I cannot hear the music and not take a step back to the 70's and high school. Clarence will be missed!

That is so cool that you saw him play at the small NJ clubs before he hit the big time. Love the Boss and RIP CC. ~Lili