The calm before the you know what

I was surprised at the number of e-mails and comments I’ve had from so many of you asking if we were prepared for the coming hurricane, so I thought I’d do a quick post to let you know that we are. Prepared, that is.

And thank you for you concern ~

My husband, a former boy scout, has been making preparations for days. (One of them was buying some batteries – well before they sold out). Hurricane Irene has been downgraded to a category 1 storm but it’s still packing a lot of punch (and media hype) and its swath is nearly 700 miles wide. As I write this (around 10 AM Saturday), the skies are overcast and about an hour ago, the wind has began to pick up.

We’re concerned with the amount of rainfall and the high winds because the ground here is already pretty saturated. You can tell just by how green the grass looks. 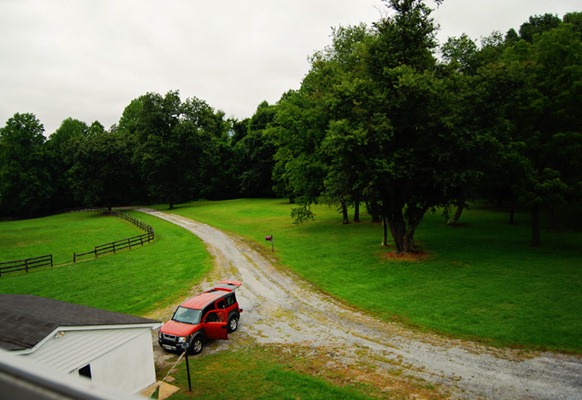 I took this shot from one of the windows on the 3rd floor. My husband is airing out the Element because I took all the recyclables and a couple of bags of trash to the dump. The scent was quite pungent while driving the 15-minute journey to our local landfill.

He packs the car and I drive to the landfill.

We’re quite the team, don’t you think? 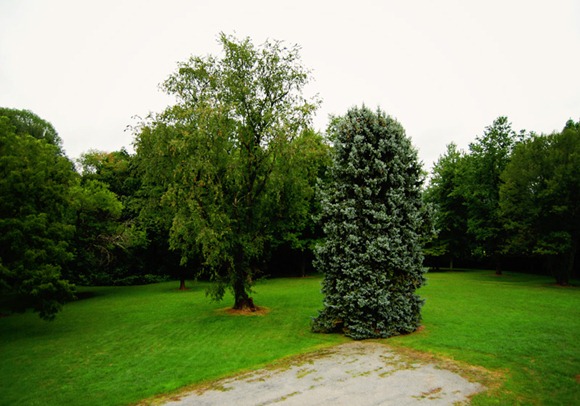 Looking southeast from the same window.

One of the tracks that was forecast yesterday had the eye of the storm moving right up the Chesapeake Bay which would have it going directly over the manor house on the hill here. Who knows what will happen, though.

I don’t plan on stressing over it. 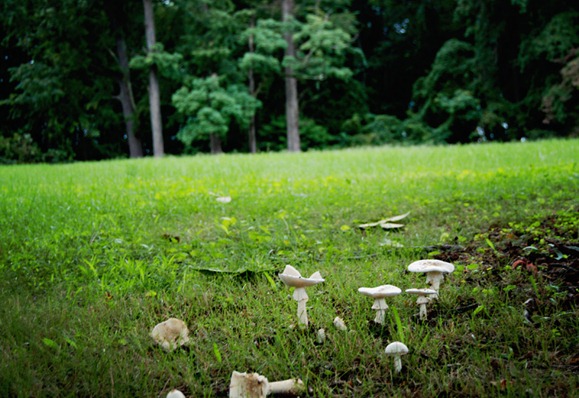 This gives you some idea of how saturated our earth is here. We’ve got mushrooms sprouting up under many of the trees. 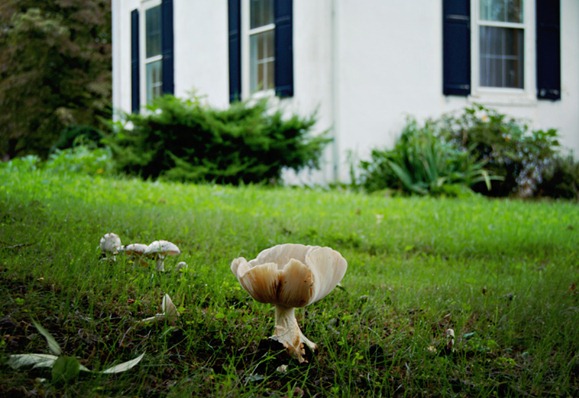 When we lived in Pennsylvania a few years ago, near the Mushroom Capital of the World, I took lots of macro shots of the magical fungi. Here are some of my favorites: 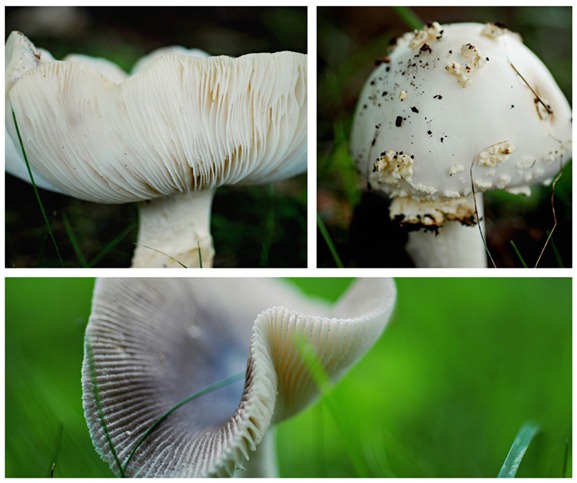 And here’s a few I took under the hickory tree in the front yard this morning. 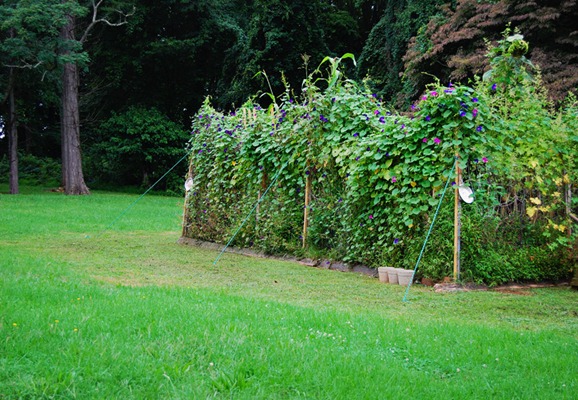 Back to the preparedness . . . my husband even has the garden staked down. I just can’t believe the wall of morning glories he has here.


And so, to all my friends and readers along the eastern seaboard and inland ~ stay safe, stay smart. And I’ll see you soon. One nice thing is that the weather next week looks like it’s going to be fabulous!
Until later, my friends . . .

I do hope Irene is less than expected and that you stay safe. Love your mushroom photos. Living in the NW, I get them all the time.

Oh goodness! I love the angle of the first mushroom shot and the unique patterns/textures of the mushrooms themselves in the macro shots. Beautiful.

We're already getting rain but we're further from the coast than you by a good bit in VA. That's all we're supposed to have in fact, rain. We didn't stock up on anything which may have been a bad idea because we're out of food and need to go out regardless. Hah.

Hope you can enjoy a good day or two inside with your hubby! A good book should be well utilized!

Thinking of you all Kate. Do hope all will be well there.
And I love those mushroom shots, they're great!

Sounds like you are "prepared". Best wishes to you and yours. Hug George for me, I do love that dog.

Thanks, all ~ just started raining a few moments ago. Watching PW on her new Food Network show.

I'm in northern VA and it just started raining/blowing here. We're much drier than you are and our ground is thirsty enough to soak up the water w/o uprooting the trees, hopefully. I'm new to your blog but it looks like a keeper. :o) Stay safe!

Look at all those mushrooms. I hope you guys weather the storm ok. We're just getting a lot of wind where I live.

Glad that the hurricane is not as potent as she could have been! There still will be some flooding and wind damge, but not quite what was projected! Thank you, Lord!

Hope you have a good book and some good wine to pass the time until you tell Irene, "Good Night"!

Glad to hear you are prepared and that you have a most wonderful Boy Scout husband who does all the right things! Mine is that way too so I can relate.

Oh, I adore mushroom shots too. They are like little fairy houses just waiting to have someone come live in them... so cute!

Stay hunkered down! Hoping you won't need a boat for heaven sakes.

Heavy rain and high winds here already, but we are as prepared as we can be. Stay safe! And I love your morning glories!

Hurricane Irene has even made it into the BBC news over here, in the UK. I sure hope it passes with minimum damage, but I am glad to here you are prepared. What a beautiful place you have, and those macro shots are simply stunning!

Do you tire of me saying, what a wonderful photographer you are?

glad to hear everything is okay. always nice to be prepared. By the way, would you mind sending some rain our way. We are in drought conditions and desperately need the moisture. I almost forgot what a green lawn looks like. :)

ToonMan just got back from what I knew would be a futile trip to get batteries .. clearly he was NOT a Boy Scout. Sigh.

I love your mushroom shots! We went hiking yesterday and I got a few shots of them... nothing like yours!
Unlike you, we waited too long to get flashlight batteries, etc. ... all sold out! It's raining continuously now ..and no backyard critters are around. All hunkered down I suppose like all of us.

I am so relieved that you posted an update. I am sitting here in California watching CNN (it's about 1:20pm Sat. our time) and hoping that all of you on the East Coast are safe. It is always a little hard to tell from news reports.

Hope you ride it out without any mishaps!!

Hey Kate, I´ve been following along with the hurricane updates online, sure hope you will all be ok. I lived on the coast of Norway for 12 years but never experienced a hurricane, but I know the power the sea can have when she is having a bad day...mix that together with some nasty winds and I am praying for you all.

On a happier note, your photos are absolutely stunning as usual, I love the mushroom macros too! :-)))
Take care, we´re praying for the safety of everyone in the path of Irene!

Thanks for update. Keep us posted.

It looks like you guys are ready, be safe!

It does look like you are pretty "wet" already, and more wind and rain on the way. Do take care and stay safe--we'll keep all of you in our thoughts and prayers. Mickie :)

I love those mushroom shots too. Mickie :)

...I've been thinking of you and hope everything will be okay. I just keep hoping that the weather people will be really wrong on this one. *sigh* One can only hope...

Just came back from a pre-hurricane party (actually with the dear elderly lady you captured a shot of while here). You can never be too prepared for a hurricane you know. Love the wall of morning glories! xo ~Lili

My beloved is afraid of high winds--and so we have come up into the Allegheny mountains of Va to stay with our son and his little family (Yay--I get to see my grands!!) until about Monday. Hope we can get home --there's lots of trees down in VA, and I've heard some of our oldest hickories in the county have been blown down.

Personally-I hate leaving home when something like this is going on--but--I don't like to see my hubby looking from window to window and pacing the floor, and worrying...so here we be--we've been watching "The Legend of Sleepy Hollow" and "The Wind in the willows" on Youtube with our 4 and 7 year-old grandkids--what yumminess! Is there anything yummier than grandchildren under your arms? I think not!

I have been thinking about you. Wasn't sure exactly where you were (in storms path). Do take care! Man, we are so dry here. Ground is literally like concrete & cracking. Little green anymore. Wish there could be a happy medium.

If Daryl sees those morning glories, you'll never hear the end of it!! We are t-minus 2 hours before she hits Stamford. Right at high tide. Ugh.

Not nearly as bad as originally forecasted..or feared. Yes - be safe!!!