I have created a monster

Meet my dog’s newest obsession. I’d like to introduce you to Squeaky Toy, something I picked up for George at a WalMart down in Biloxi. It’s also something that he hasn’t put down since I first gave it to him four hours ago.

This is not an exaggeration here. 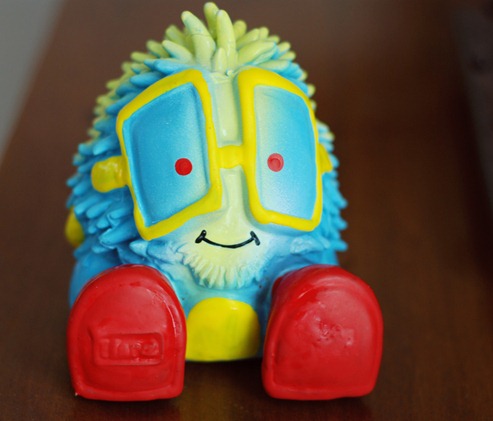 It all began when we were visiting our friends last week. They have two dogs named Bella and Dinky. The Dinkster is an elederly female daschund that has been in their family since their children were young. Dink still gets around ok, and although it always took a day or two when we visited, she and George have always gotten along.

It’s mostly because George is a gentleman and he knows his place.

And then they got Bella. I have no photos of them and please forgive me here because I didn’t feel like picking up my camera much during this last trip. With the exception of taking photos at the casino pool and some family pics, I basically didn’t use the camera at all. I get like this sometimes.

But back to Bella. She’s young, she’s a little bit crazy, and she runs in circles in the yard as if an unseen force is chasing her. At first George was a little freaked out by her over-exhuberance and wouldn’t give her the time of day. But after a couple days, he was running with her as if they were old friends. She even let him play with her toys.

With the exception of one.

It was her squeaky toy. And by the end of the week, we began to notice that whichever dog had the squeaky toy was the alpha for the moment. My husband and I saw George one extremely hot afternoon, laying outside by the pool with his arm around Bella’s squeaky toy. He was not going to give it up. This is when I decided to get him his own and bring it home. 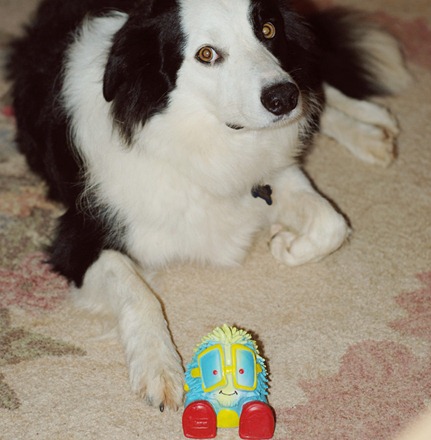 I just remembered it four hours ago and gave him his new prize. I couldn’t believe how excited he was. And in those last four hours, we have played toss, fetch, catch, and I even took him for a walk in which the toy accompanied him. When he wasn’t squeaking it, he was dropping it on the path for me to pick up and toss.

After four hours of this, I thought I would lose my mind. If I put it down, he brings it to me, places it next to where I’m sitting and does the border collie stare-down.

My husband took him for a walk just to get him away from me.

I have truly created a monster here.

Can you tell me the name of that web site where you can put a whole bunch of photos in one box.......like a big one in the center, and small ones around it....I can't think of it to save my soul. I have used it, and I think you put me on to it.

Rowdy has been the same way yesterday and today since I bought and gave him a new chewy/rawhide... video will be shown tomorrow if you care to view his neurotic behavior... LOL Dogs... gotta love em, they're so silly and entertaining.

Oh my. Yes, the squeaking would drive me nuts too, LOL! My Girl takes the squeakers out in 5.3 seconds.

I KNOW that doggie look ...

My Siberian is the exact same way, but with all of his toys. He trades off. Brings one at a time and lays it in your lap then gives that long wolfish stare down - unwavering until you throw it. Completely understand your frustration [of love]!

Oh how I am laughing... sounds exactly like our Tori Mae, esp the ole stare-down!! :)

My Airedale, who has since gone to the playground in the sky, LOVED her toys. My 2 dogs now care absolutely nothing for toys. Zoey would rather play keep away with an old stick she found on the property. Zach would rather follow his nose and look for ground squirrels. I don't know why they don't like toys, but I guess it saves us some money.

My oldest mini-schnauzer, Chloe, would tear into anything with squeaker trying to find what made it 'talk'... except for her flimsiest toy, a little yellow rubber ducky. It was HER toy and SueSue, my younger mini, knew it was Chloe's. Everything else they have shared but when SueSue would accidentally go after the duck as soon as she realized she would drop the duck. Chloe would squeak it until I was nearly crazy and would distract her and put the duck up for a bit. Whenever I would get her duck out for her it was always a happy reunion until it finally lost it's squeak. I haven't been able to find another one. I found her a squeaky fish and she plays with it but not like her duck.

Thanks for George's 'toy story'. Made me smile to remember Chloe's ducky.

I would say he's truly savoring being the alpha dog with his new squeaky toy. Maybe you should grab it to get some rest...haha! xo ~Lili

If only we were so content with such a small, wonderful thing! Good for you, George!!
Good thing we have Walmarts everywhere in case he needs a new one!!

What a good Mommy you are for getting that toy for George!! He is soooooo handsome!

Isn't it funny how an animal will get attached to one specific toy!

You made his YEAR by giving him that toy! Now, good luck with getting anything else done in between tossing the toy for him!

I thought i was seeing a cup cake for a min, i was ready to help you destroy it by washing it down with some milk,lol. Richard from Amish Stories.

oh wee, but the cutest dang monster I've ever seen!

Love the glasses on the squeaky toy.

Love it!! Let's hope he loses a tiny bit of interest before you go absolutely mad though.

Your description of the dogs & their play is spot-on. I LOVE that squeaky toy, too - although I think I'd go completely bonkers if I had to listen to it for any more than a few minutes. That is definitely one happy dog you've got there, though.

Now that is a cute toy .. nevertheless I think by now I would have de-squeaked it .. just sayin' the squeaking would be a bit much ..did I ever tell you about the dreidel squeaky toy I got my friend D's obnoxious DIL's dog? He loved it so much .. every time he put any pressure on it .. it played 'dreidel dreidel dreidel .. ' sigh .. it drove the obnoxous DIL crazy ... mission accomplished

Intensity thy name is George....smiles

LOL, maybe I should go get one for Misty, she is driving me crazy and wants to be outside every waking moment!!! I'd take a squeaky toy for 4 hours rather than a whining dog for 4 hours! ;-) George looks SO happy!

My BFF's shepherd plays "mommy" to a rubber chicken when she's in heat.
(*when the dog is in heat not the BFF*)
Thanks to God there are no squeakers in rubber chickens. Ack.

I wonder what it is about that particular toy...maybe I should buy one for myself and find out. Not for my dog. For me.

Now you have gone too far--calling George--our favorite dog (since I do not own one!!) a monster! lol

After I have heard our cat play with her bird toy which whistles and coos,I want to run away from home. We put it up on a shelf where she can't find it at night, so she won't bring it and put it in bed with us. The other night I was (ah, no, I wasn't dusting!) looking for a book--and found the bird up there--it had been up there over a month. (Told you I wasn't dusting!) Now, she seems afraid of it. Maybe if you put 'Squeaks' up on a shelf for awhile, George will "get over it!" Sorry for the long 'comment'-but I missed you!

I sure have times when I just don't feel like taking photos too...I think I have taken a total of about five since I returned home from Maine...and I wouldn't have done that if I didn't want to let down the other two O's of OXOXO...

My dog has always steadfastly refused to play with toys...what a snob!

We love your little monster! At least George will 'play'. My furbaby won't bring her toys back...how selfish! Listening to the 'oldies' is such fun...you know back when you could hear the lyrics and sign-a-long!

Sounds like a great trip, and yes I hear you. Good thing that you have similar tastes in music.

This is so funny. Toy obsession. Yes, we have that often here, too.