The basics of bird photography

When BlogHer asked me to participate in this project, I initially thought I wouldn’t be able to comply. The assignment was “capturing summer fun” and my mind immediately conjured up images of sailboats on the water, children playing on a beach or having fun in the pool, and I wondered how I could contribute and remain true to my style of photography.


My favorite subjects have to do with nature, so it seemed fitting to do a post about digitally capturing birds –- and specifically the art of capturing The Elusive Bluebird. 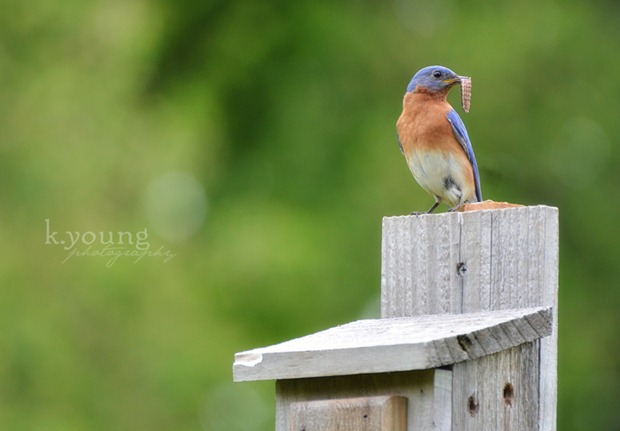 It’s really quite simple, so if you’re expecting a technical post, that’s not what you’ll find here. You see, the art of capturing these birds is simply a combination of timing and patience. Well, that and a good camera with a zoom lens. I used a 70-300 mm with built-in vibration reduction for these photographs, and believe it or not, all of the images were shot using the sport mode on the auto dial. I rarely use the auto dial anymore, but sometimes when the light keeps changing, as it was doing on this somewhat overcast day, the auto dial seemed to be just the ticket. I also set the shutter to continuous high-speed mode. 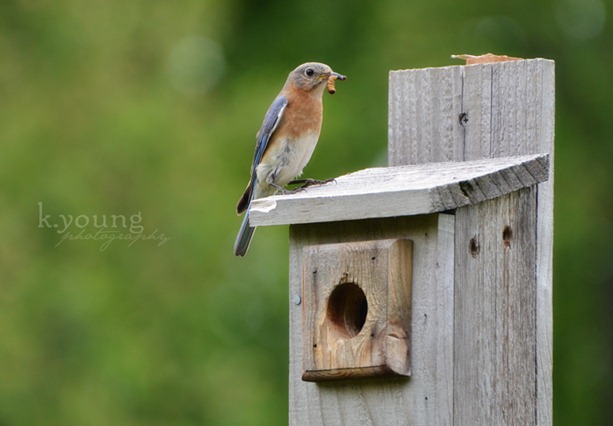 My husband and I are caretakers of an old manor house that sits on a hill in Maryland and we’ve got several bluebird boxes posted along the old fence line that runs through part of the property. I love watching the bluebirds go to and fro while busily feeding their young. On this particular day, I noticed some bluebirds coming and going from one of the nesting boxes. Not having anything planned for the afternoon, I gathered everything I would need: the camera and lens, something to drink, and a comfy chair and footstool. I got as close to the box as I dared, and then settled in to wait, moving the chair closer and taking a few test shots, getting into just the right spot for photo composition. 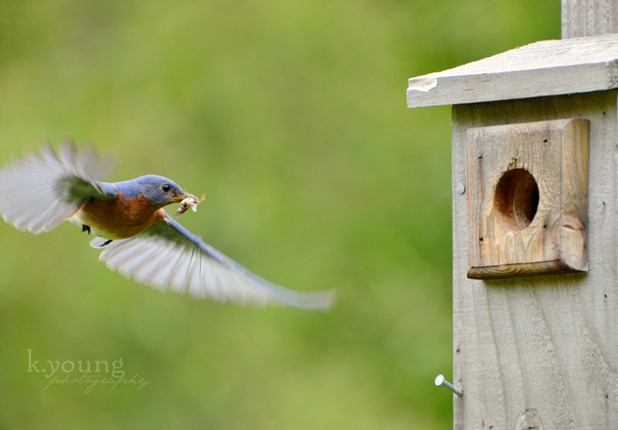 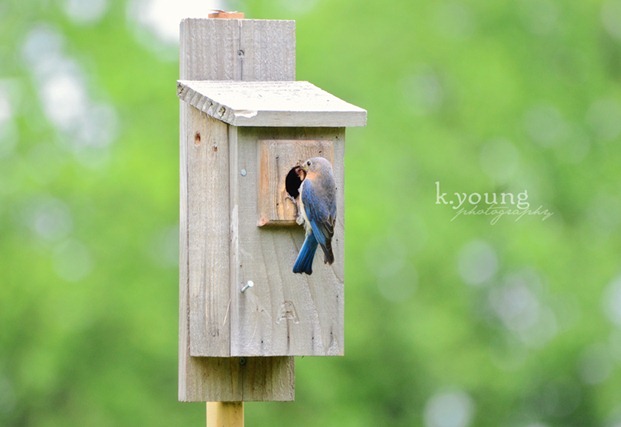 After I got settled, it took over half an hour for one of the parent birds to come around. It was the female, and I saw her go into the nest, listening as her brood made excited chirping noises. But when she came out, I saw that she had something in her beak. And I kind of freaked out a little, because it looked almost like a tiny bird. I know bluebirds are born blind and with no feathers, and this is what I thought I saw. I couldn’t believe that she and her mate would attempt to move the babies because I was sitting so near, so I got up and checked out the film on my computer to try to see if I could tell what was in her beak. After looking at the images zoomed in and researching on the internet, I found that what she had in her mouth was a fecal sac. 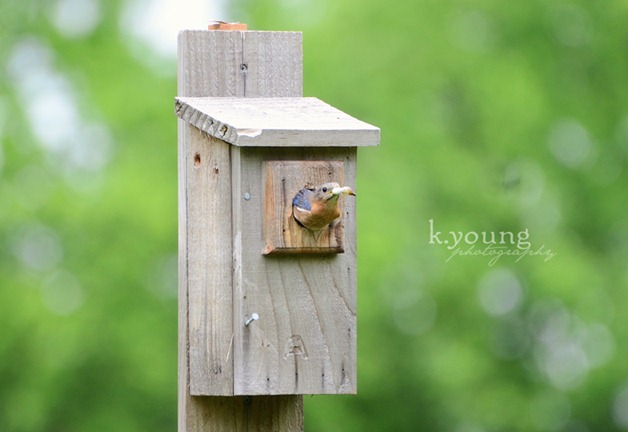 A fecal sac is a clean, tough mucous/gelatinous membrane/film containing the excrement of nestling birds. Nestlings usually excrete one sac after each feeding, especially as they get older. The parent grasps the sac by the middle with their beak. I read that both parents contribute to the removal of the waste matter, but it was only the female that I saw doing so on this particular day. 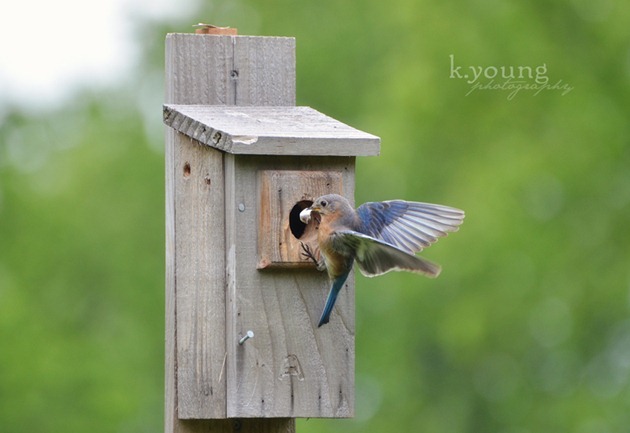 After three hours of sitting and being patient, and just taking it easy on a somewhat cloudy early summer afternoon, I managed to get them both at the box at the same time. 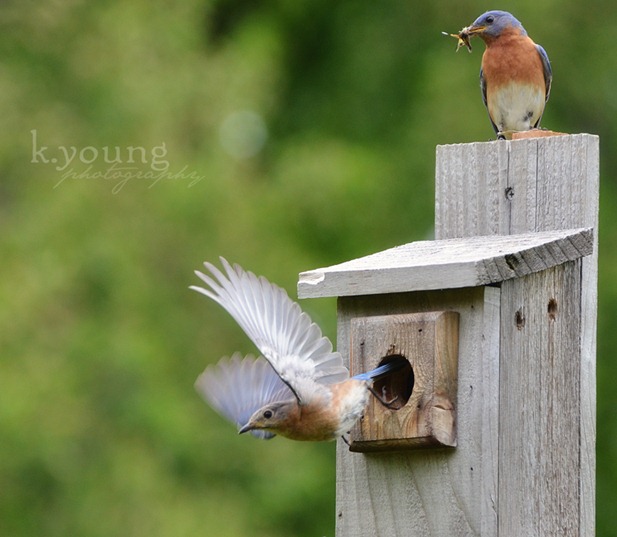 And all it took was time and patience. Hope your summer is off to a great start! Thanks for stopping by today ~ 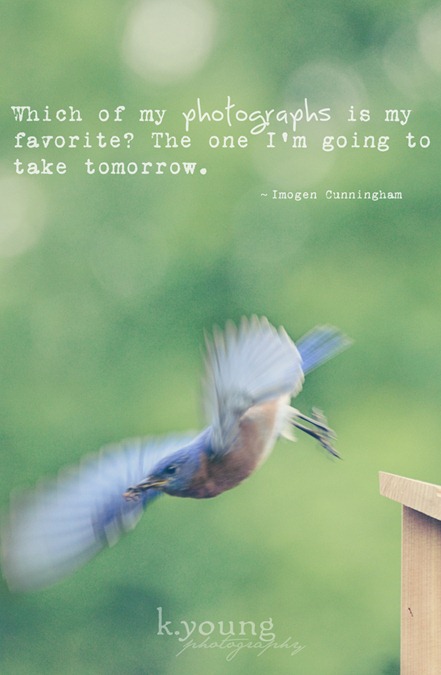 wonderful photography as usual there Kate. Love all the open wings and how fun to discover something new like the egg sac thing. I never knew, that's for sure
peace,
CheyAnne

yay! for bluebird babies! we had some that started a nest, but then a certain naughty kitten scared them off. i was glad it was before they laid eggs.
so fun to see them feeding here...

AHHHHH....this post of course speaks to my heart!
Absolutely stunning images. I hadn't thought of using the sports mode....what a GREAT idea!! I'm going to try it!
Thank you Kate for always adding beauty to my day!

I love your photos. I had the rare pleasure of seeing a bluebird yesterday while visiting my son. We live in MA and I have never ever seen a bluebird.

Fantastic photos . Congrats on the BlogHer . I do all the same things as you described here only I use a Nikon D 3100 and a 55-300 mm VR lens for my bird photos . Have a wonderful day !

A stunning chronicle of your summer days...amazingly beautiful, as always.

Amazing Kate...just amazing photos.
And your ability to sit for three hours, especially to capture that last shot. Good on you. Just a wonderful post. You deserve a medal. Or a prize!

Thanks for the tip on the Sport setting -- I have never thought of using that with little animal critters. I LOVE the "spread wing" shots:))

I've found that sport mode does not work well in bright sunlight. I switch to shutter priority for that, upping it anywhere from 5000 to 6400. Good luck!

I don't even know what to say....you have amazing skills and patience. I would love to spend an afternoon in your backyard.

Lovely and informative photos of the bluebirds.

Thank you for sharing your technique. I had a feeling patience had a lot to do with it. I'm still working with a small automatic camera with no fancy lenses. I so admire your bird photography, as you know. These are simply stunning. It also never occurred to me that there would be a need to remove waste from the nest. Of course it makes sense, but I'd never given it any thought before. Interesting factoid.

Totally awesome as always Kate. Thanks for sharing. See you tomorrow.

I miss Eastern Bluebirds, but looking at your pictures is of great comfort. Thank you! :-)

That was an incredible journey into the lives of the bluebirds and an insight into the patience of the bird photographer. How interesting about the faecal sacs - I had no idea.
The shot of both birds at the box is so moving. Lovely - thank you! kxxx

and in my Blue time it is so nice to have a story about Blue birds. x

Loved your pictures today. Loved the close up of mama bird bring in food.

Such talent and such patience! I wish I had just a little of each! How wonderful these photos are!

I just love being drawn into the bird world of your images; they are amazing creatures-- and your photos are remarkable.
I can relate to the mama bird being the one to clean out the nest ( my husband has N_E_V_E_R cleaned the bathroom in 35 yrs.) LOL
LLC

As purty as ever!!

Awesome images...I love the write up as well. So good to read how someone else sets up a photo shot.

that's it. that's why my bird photos never look like yours....PATIENCE !!!!

honestly, i have none. well, actually very little patience.

so now i know the true and very technical part of capturing amazing bird photos, which you taught perfectly.....it's called "go to kate's blog."

These are so fabulous, Kate! I found out we have blue birds in Columbia, so I'm hoping to put up a house for them after we get our new home built. Hope to get some good photo time with them! They are so pretty!

I don['t have the patience either---but man--I do love it that YOU have it. These shots are truly something!

Oh wow. These shots are incredible. I use a 70-300mm lens and will be doing a bit of practicing with the sports auto mode. Well done on these beautiful pictures, Kate.

patience sure is a major factor
that and being quiet, I usually scare them with my clumsy fumbling :)

the flutter of wings is so stunning!!

Oh Kate, these are so gorgeous! I don't have nearly enough patience for bird photography. :) xoxo

A Perfect summer day! So envious of your blue birds.

SO amazing...love the bluebirds :) so when you're shooting with the action setting, where do you place the focus square? or does it matter? I struggle trying to keep the square on the "subject" and wonder if it matters...I too use a Nikon so was just wondering, your shots are continuous inspiration for me :)

Thanks Kate for the helpful info. These photos are amazing. I can't stop looking a them.

My name is Judith Atwood, and my blog is http://thesundripshoney.com. I'd like to use one of your birdhouse photos, with full credit to you, to accompany a poem I am writing about the perfect summer day. Please, would you let me know by email: jatwood[four numeral] at comcast.net if you will allow me to do so. (please don't use the brackets in the email address -- just 4. Thanks so much -- I think these bluebird photos are lovely, and they portray exactly the mood I seek. Thanks very much for your time. Best regards, Judith Atwood