Photos from the phone

After dinner tonight, I walked around taking photos with my cell phone, a Droid X2. These aren’t anything special, just goofy images from my house.

Well, it’s not really my house. It’s the house my husband and I caretake. But it feels like home. Because it is at the moment. 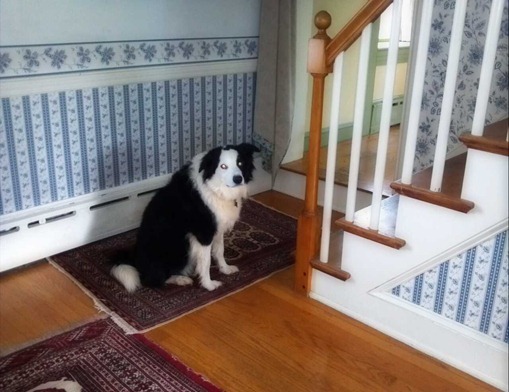 George with laser eyes. We’re in the dining room in the original part of the house which dates to 1769. The new addition, built in 1810, begins at the step up by the stairs there. 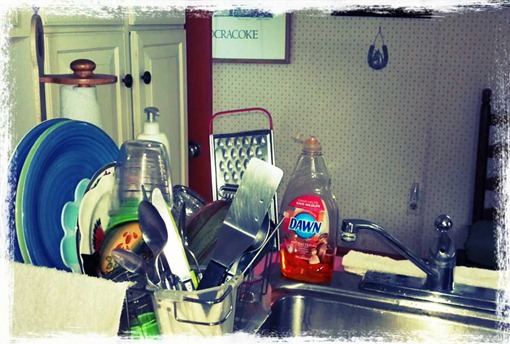 I made dinner tonight then cleaned up the kitchen and took a picture of the dish rack. Aren’t I exciting? We had chicken fajitas and they were great, if I do say so myself. I don’t often make dinner anymore and I sort of miss doing it.

Ok, let me rephrase that. I don’t really miss making dinner and I’d rather have a cook. But it sure is nice to make something that everyone wolfs down, burps, and then says, “that was good.” 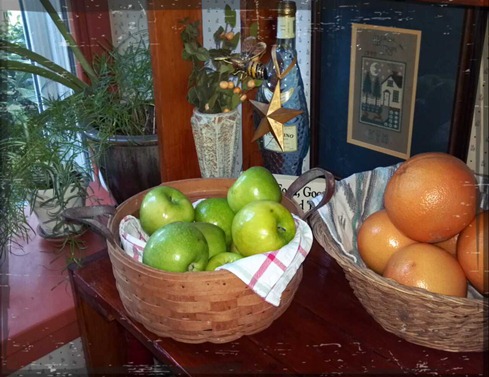 Portrait of my fruit.

That framed counted cross-stitch on the wall was done by me back in the early 90’s. 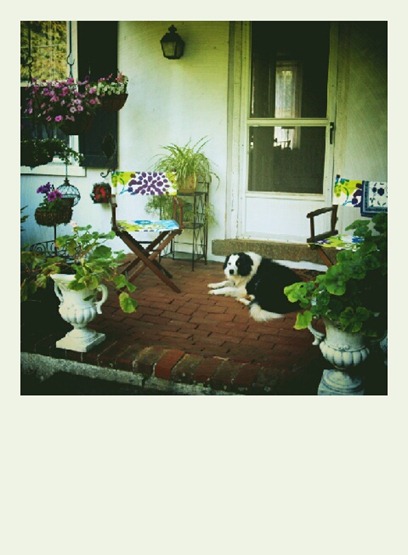 George lounging on the little back porch. The door opens into the dining room and my husband and I wonder sometimes if this wasn’t the original front door to the house. 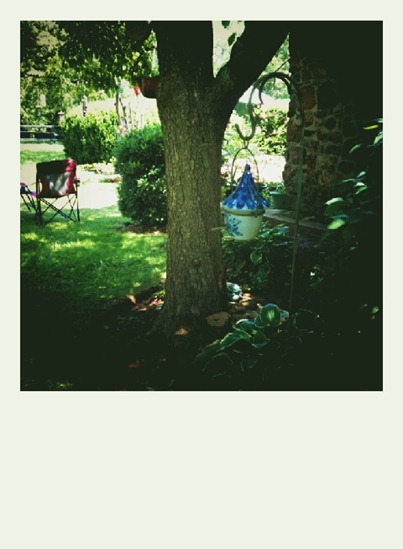 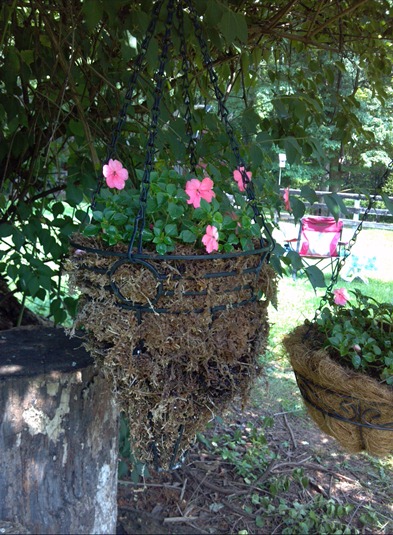 Baskets of impatiens in the shade.

(taken with the camera that came with the phone – no editing) 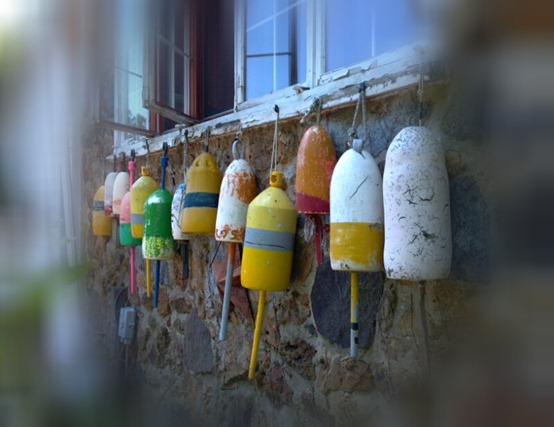 My husband’s buoy collection, all acquired while vacationing in Maine over the years.

It makes the patio area look like hillbillies live here. But who cares! 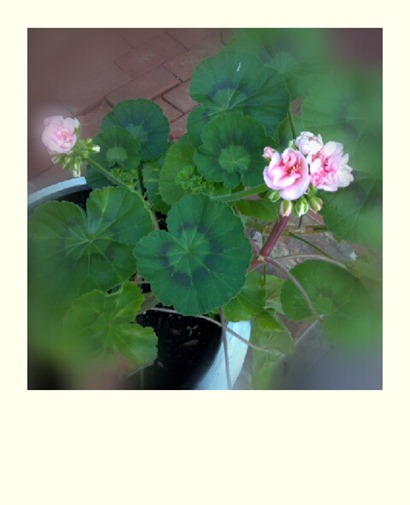 Geraniums on the back porch. 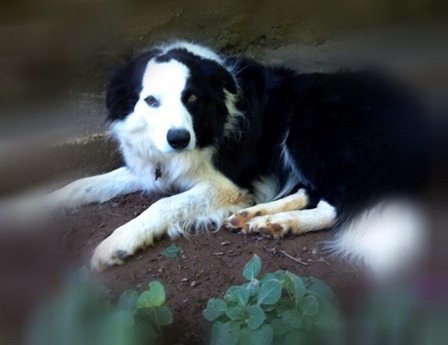 George lounging in the shade garden under the dogwood tree out back. He’d better stay away from my impatiens. Sometimes I find him lying on them!

You still awake? Good. Thanks for stopping by and visiting with me for a spell.

Oh, crap. Now I actually SOUND like a hillbilly.

I have followed your blog for a while now but never commented. I just want you to know how much I look forward to reading your posts and how they make me smile!
Kim

Home is where the heart is. I feel your heart in all these photos.

Hey, what's wrong with being a hillbilly?? Kidding. I have skulls and a painted cow's pelvic bone in my yard...but I do not have a couch.

HA! Gail. Nothing wrong with it.

Your love for your home does shine through in your words and pics :)

I love the buoys. I covet them.

I liked this post and photos . I dont mind cooking or doing the dishes , mind you I have a dishwasher but I wash the pots and pans by hand gives me something to do lol. I'm with Gail , home is where the heart is ! I was outside today and took about 200 photos guess of what ? you guessed it birds, birds and more birds some of Miggy of course , squirrels and chipmunks . Heck , hillbillies are just like country bumpkins , we dont give a hoot ! Have a great evening YEEHAAWW !!!

we lived on the kentucky border for 8 years. i know hillbillies and since you have all your teeth...well....oh thats's so mean of me. sorry hillbillies :)

Those buoys, along with any mention of watermelon plants, will always make me laugh, simply because of how you feel about them.

Those are incredible photos for telephone shots. *psst....I actually don't mind doing the dishes either...*

I actually love those buoys. They bring a smile to my face whenever I see them. As does George. And your latent hillbilliness. ;)

Love your photos..Especially the ones of George and that last one really especially..as it reminds us of our border Collie. Annie is a Red and white one tho but she gets that same look on her face. Oh and I hate doing the dishes so we got a dishwasher, but my husband hates using it so HE washes the dishes as he takes them out of the dishwasher. :)

I feel like I just had a nice little walk with you around your home:) Don't you just love your camera phone?!

Such a charming place to live...

Thanks for a new glimpse of your life in the house on the hill :)

I thought Reena was going to try and make off with one or two of those buoys .. having set a spell under that tree, I can attest its purty sweet on your ole homestead

you live in an old house long 'nough and hang 'round the hound dawgs and folk who eat and burp and say... that was good...yew'll sound like a hill billy soon 'nuff Kategirl...and there's nuthin rawng with that...
ps. love the shot of the dishes...looks very vintage!!!
:)x♥

I love doing the dishes too (mostly) and actually we have a dishwasher but if it's just us eating I'd rather do it myself. It's meditative (mostly)

Love the little walk around. The first picture is very beautiful - George naturally is the star but the stairs and the walls and rugs - all lovely.

I doubt that hillbillies string lobster buoys in their dooryards. The people with the lobster buoys are called "Mainers". I had chicken fajitas tonight, too! yum. xo

Yo! Funky.....love that edit name!.....love the light hearted feel of all these photos,Kate ....(I have missed too much of the blog-o-sphere lately)...and to top it off, my first studio was named Little Photography.......you and I are linked, me thinks.....smiles

Oh my--you and I were doing counted cross stitch at about the same time! I wonder what became of it? My eyes and shoulders got too bad, I think. Just got tired of it, and started knitting soon after that!

I am slowly getting more and more into iphone photos... now I need to check out some of the apps you mentioned....
these are all wonderful.

Two years ago we had a flicker that kept hanging out by our tomato plants. I loved him. These are all great, but the one of the house finch on the bird feeder... perfect.

I have the same phone, a Droid X2! And I downloaded Be Funky quite awhile ago (based on one of your blog post recommendations). I've only used it a few times, but oh what fun! I took a pic of a PF Chang's on the waterfront in Wichita, then cropped it in BeFunky so that only part of their horse statue and the water behind it showed, then did a photo effect that was so cool I just HAD to make it the wallpaper on my phone.

Anyways, I ramble. That's what happens when you finally get rid of one of your TWO jobs and finally have some time to read blogs again. What a joy. I hear our rooster crowing outside this morning while I read my friends' blogs ~ one of the small joys in my life that I have missed dreadfully. My own blogs have missed me dreadfully too!

Your photos are beautiful, as always Kate. I know you've had a year full of trials, and I'm wishing you a blessed and joyful summer with your husband and George.

Just found your blog today -- huge birder and absolutely LOVE your bird photos! But I had to comment when I saw the buoys; we live on the coast of Maine and was so happy to see your lovely pic! George is adorable too :)

Hey I spied one of our former buoys! I too enjoy doing the dishes Kate...good thing as we have no dishwasher in this house. xo ~Lili