I did tell you that it would be awhile until I posted again, didn’t I? The school year is winding down but the busyness that goes with it is still there, however with the students gone, I had much less interruptions today. Ha! My boss told me that I could take the day off last Friday if I could get done my goals, which I did.

Friday morning found me in my favorite pajamas, sitting outside on the back patio while I enjoyed a satisfying cup of delicious coffee in the early morning light. And the birds were everywhere, so of course I went inside for the camera. 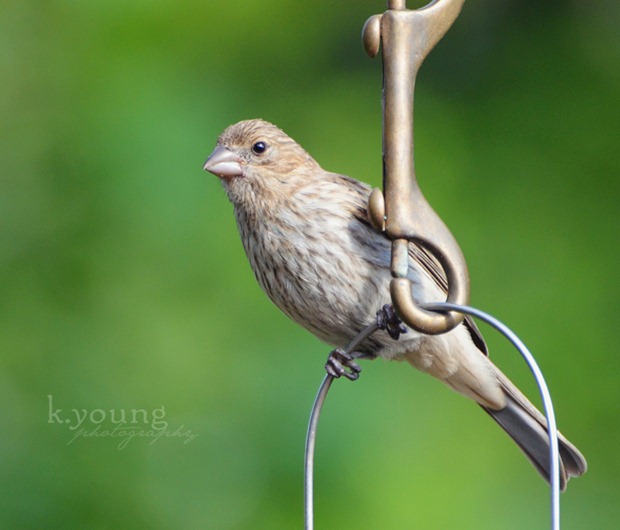 I know that some of you are thinking that all you see here are birds and more birds. But I’m not going to let it stop me.

I liked this pretty portrait of a female house finch as she sits on the curved wire top of one of the feeder. 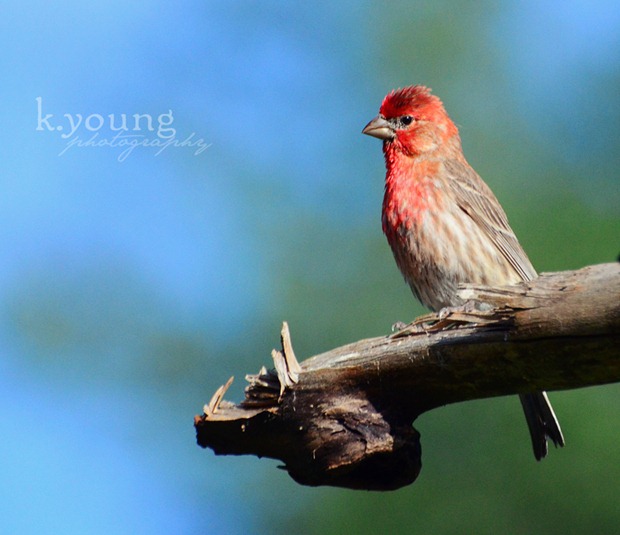 This is the male.

I don’t know where that came from other than they just look like they’re having breakfast and doing some catching up on the local gossip. 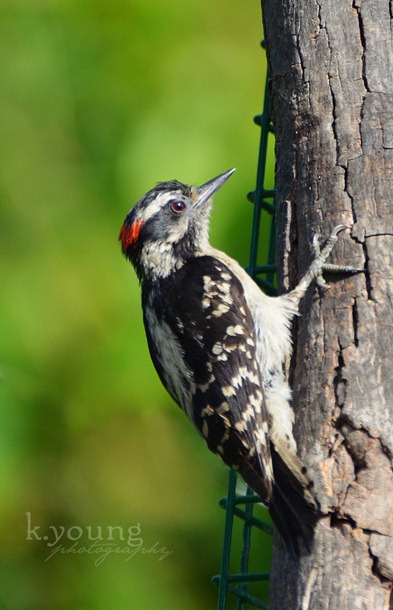 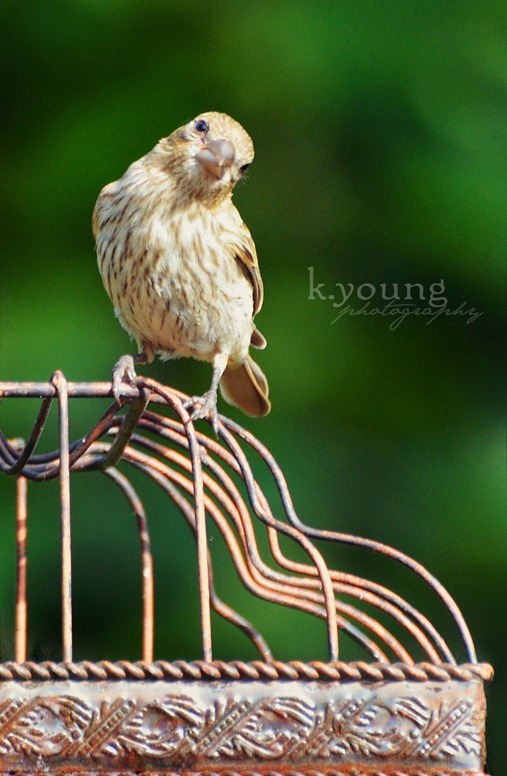 And another female house finch standing on top of a decorative birdhouse that was given to me by a dear friend. I haven’t seen that friend in awhile . . . which is very bad of me. 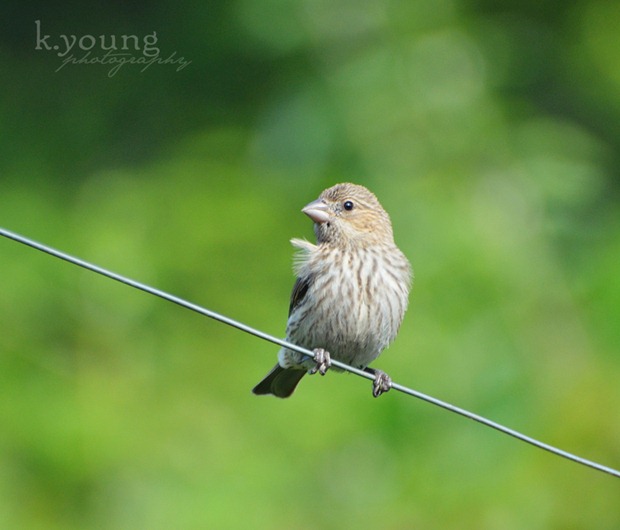 It was windy on Friday.

And that night, a storm blew through.

But oh, the morning was glorious. 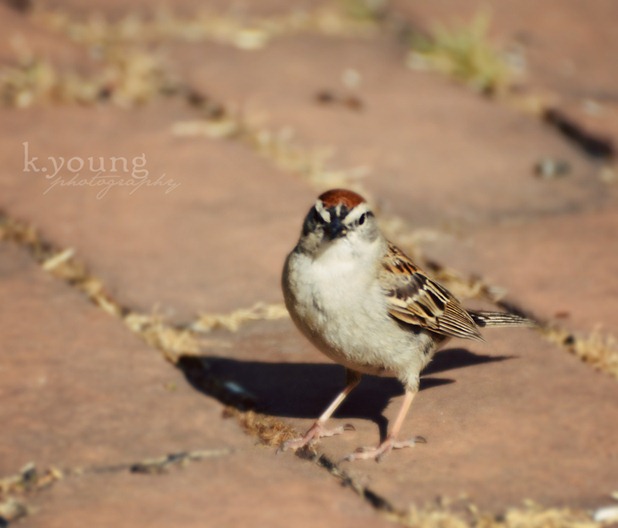 Carolina wren. Can’t tell whether it’s a male or female because both sexes look the same. 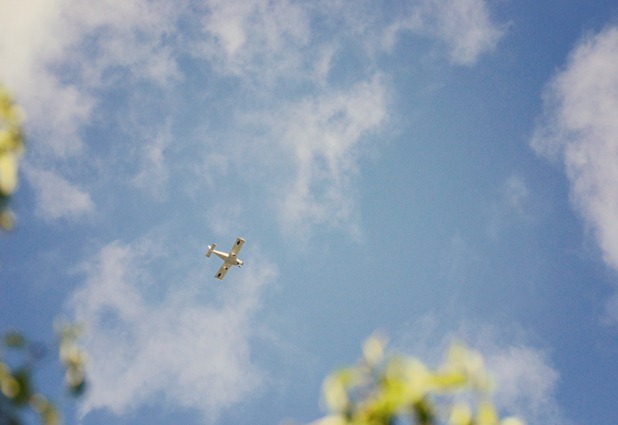 A little plane drones overhead on this lovely morning. 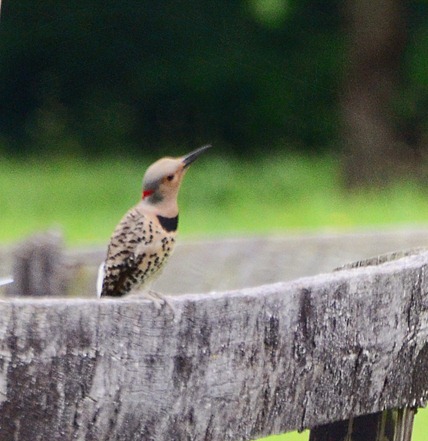 And then this, a catch I’ve never before experienced! This was taken from a long way away (hence the clarity). It is a Northern Flicker, the yellow-shafted form.

Northern Flickers are large, brown woodpeckers with a gentle expression and handsome black-scalloped plumage. On walks, don’t be surprised if you scare one up from the ground. It’s not where you’d expect to find a woodpecker, but flickers eat mainly ants and beetles, digging for them with their unusual, slightly curved bill. When they fly you’ll see a flash of color in the wings – yellow if you’re in the East, red if you’re in the West – and a bright white flash on the rump. ~ from the Cornell Lab of Orinthology

You learn something every day, don’t you?

Thanks so much for stopping by today, my friends . . .

A perfect summer day is when the sun is shining, the breeze is blowing, the birds are singing, and the lawn mower is broken.  ~James Dent

Your photos are beautiful! I especially love the shot of the finch on the birdhouse.

Ok , are we related by any chance and dont know it ? lol , cause this is how I feel about always posting photos of the birds in our back yard at the feeders and hope others arent getting bored of them over and over again lol . I to love to sit in my jammies and take photos in the early mornings with my tea on my patio and even take photos of small air planes that fly over lol I have a few photos of them as well . Sounds like we both just love taking photos of anything . Fantastic photos by the way ! Have a great day !

The Northern Flicker is a regular here but very skittish , I have only got a few photos of him from a distance as well . He likes to eat the bugs that get stired up after we cut the grass !

Beautiful pictures, some look like they are posing for you! Thanks so much for sharing.

I love your bird photos so keep them coming.

oh girl....said in my best southern accent.....
you know we love your birds. we really do.
and the ones with tufted hair on windy days always make me smile. but i'm easy like that :)
xo

Like I've said before, I've never seen so many different breeds of birds in my life as you have there at your place.....It is like a fairy tale.........Kay

I could never get too much of your gorgeous birdies Kate! Your photos of them just get better and better and you have made me yearn for a better lens:) Not to mention the patience!

We have lots of flickers here in our neck of the woods...I love seeing that flash of yellow. Hope it starts quieting down for you soon:)

at our home...we watch the birds. we are in the country. we have everything a bird would like...fine linens, great room service, their wish is our command....feeder at every tree, food for every taste. right now we are trilled to find great golden eagels nesting in a oak....be still my heart. when one flies over a large shadow follows. so, no worries about bird pic....i LOVE them....also have some of those oh-so-cute downy woodpeckers out the living roon window...
pretty crazy here to...

Oh Kate .... you know I never tire of your birdies!! They brighten up my day!
You are becoming the "bird whisperer"!
Stunning captures!

the only birds I ever get to capture in pixels are the ones I see when I visit you and Reena .. occasionally we get jays in the back 'yard' .. but mostly sparrows or house finches .. oh yeah there are robins in the park .. robins that sit and wait til I am thisclose to depressing the shutter and then they take off ... grrr

Beautiful bird images! I love that gorgeous birdhouse, and capturing woodpeckers is so challenging, your shots are wonderful as always!

On The Road Again said...

Oh please don't stop taking pictures of the birds, I so love looking at them.

LOVE the birds. My Junior Birdman loves your posts with all the bird photos too!

Beautiful as always. Funny, we have a lot of flickers here in CT. xo

I LOVE your bird photos! They're among some of the best I've ever seen and these are fantastic. I had to laugh at your description of your morning - in your pj's with your cup of coffee. It sounds like my mornings with my dog. I swear, the neighbours must recognize me by my red flannel pajama bottoms by now. Sometimes, I keep them on all day, just because I can. Keep those bird photos comin'.

I so love the birdie pictures. Just love them.

Lovely, I don't mind the birds, in fact I welcome them indeed.

They are lovely, and such a variety.

Do you feed them year round? We stopped because everyone said we should but I miss seeing them around...the mice can be bad if we continue.

I love, love photographing birds so truly enjoy your lovely photographs. I was fortunate enough to get some pretty good shots of Flickers in flight while we were in Montana last summer.
I thought when we moved to this gated senior community (after living in the woods for 30 years) that I wouldn't see too many birds. Fortunately a near neighbor scatters seed and bread in the empty spaces between our houses and we have many birds, including pheasants and Mallards..at one point the other day there were an even dozen Mallard drakes out there. Anyway...just wanted to let you know that I love your captures so don't stop sharing, please.

I lover your birds ... and an occasional photo of George.

LOVE the birds! Love the pictures!
Thank You.

Beautiful. I have never heard of some of these birds. Thanks for sharing.

I nominate you "Queen of the bird shots!" How's that for a title? So gorgeous. xo ~Lili