This is a funny little story, although I’m not poking fun at the person in it. Anyone could have made this mistake . . . well anyone who had never heard this noise before.

At work yesterday, my intercom rang. It was a co-worker (who shall remain nameless). And well, here’s how the conversation went down . . .

HIM: Kate, come over here right away. I need to show you something. Come quick. Ok?

ME: I’m busy and I don’t have time for your silly games, you impudent fool. I’m hanging up now.

Seriously, do you think I would have said that? For one thing, he’s not an impudent fool, and for another, I wouldn’t be mean like that. What I did was hang up and walk over to this person’s office right away. When I arrived, I saw that his windows were open to the glorious day, and he was excited and had his ear to the one nearest his desk.

I stand quietly for a bit.

ME: I hear birds chirping.

After a moment, I hear what has him in a dither. It’s a familiar scream that’s coming from the nearby woods and I’m fairly certain I know exactly what it is, so I smile.

HIM: I think it’s a TIGER! It sounds like a TIGER, doesn’t it?

It begins screaming more. And every time it does, he jumps.

HIM: A tiger. It sounds like a tiger! Or maybe a cougar.

ME: It’s fox screaming. They do that. 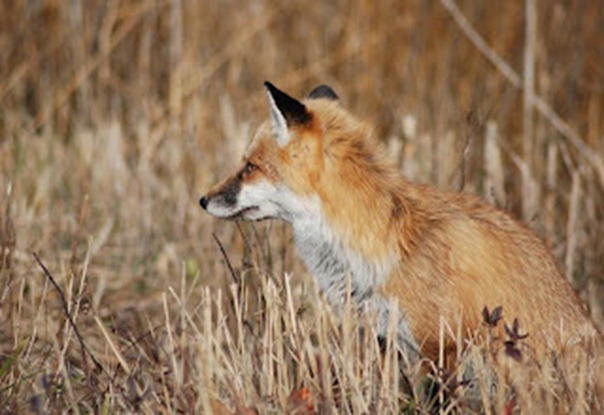 He calls out to his assistant, who agrees that she’s never heard this sound before (despite the fact that she lives in the woods), and I had a nice little chuckle, assuring him there was no loose tiger, and that it was really a fox. And it’s probably mating season. 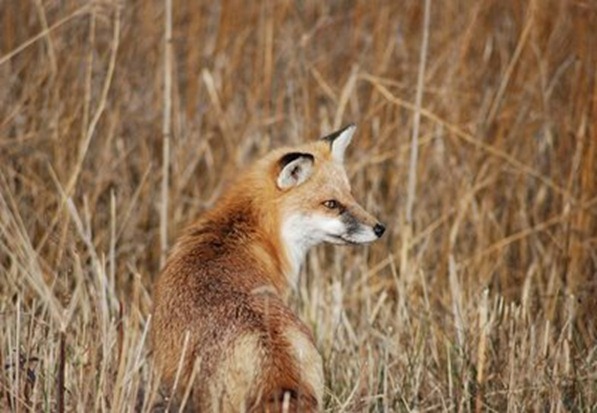 I couldn’t wait to get back to the woman I work with in the office across the hall to tell her this funny story. She suggested I call him back to tell him that we just got a report of a loose tiger from the carnival that’s in town.

He didn’t think that this was very amusing when I phoned him back to tell him this.

Nor did he think it was funny that I started calling him “Tiger”. 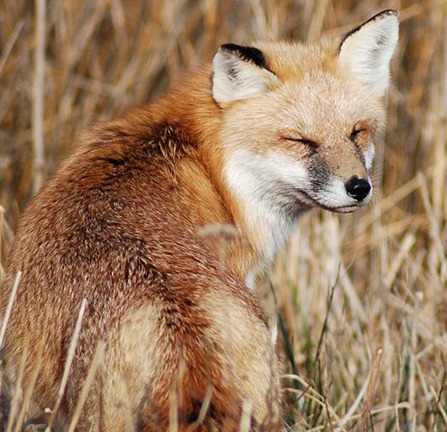 
In his defense, he’d never heard a sound anything like this before, and if you listen to the video below in the section entitled “vixen’s scream”, it may have you feeling a little disconcerted, as well.

And that is my story for today.

But I really don’t call him Tiger. That would just be unkind.

The photos accompanying this post were taken in late December 2007, when I began writing this blog.

i think you totally need to call him tiger :)

and i have heard the screams of the tigers....ummm, i mean fox....i think.
do coyotes do the same thing/make the same noise ?

ewww, the screams of anything now have me thinking the silence of the lambs :(

beth, there is a reason i don't watch stuff like silence of th lambs :)

I totally would call him Tiger too unless he was one of the ultra sensitive type....

had NO IDEA that foxes make any of those noises; as usual, you have enlightened me.

my child liked listening to those sounds; and I'm so proud, she is eading so well that she was reading the post as she listened :)

good story! and I learned something-

We had a fox screaming in our neighborhood last year but none so far this year. It's really a distinctive sound when they cry. :-))

Fantastic post and photos . Yes it's almost like a cry as well . Here they loudly cry its a bit eerie though . I could imagine some ones reaction like this guys to it that has never heard it before ! Have a good day !

I live in the middle of the woods and I know I have fox living around here because I have seen them often enough...but I have never heard them screaming like that! If I heard it I probably just thought it was one of the neighbors:)

Wonderful photos! I am glad to see that these were not some of the ones you lost!

that is the coolest video ever...I watched/listened to it as I sat on the couch next to my German Shepherd Layla...she lifted her head and held her wonderful ears at alert for the Vixen's cry and the alert...they really do sound like a cat of some kind. We hear lots of coyotes around here...but that's about it. :)

It sounds to me more like someone getting killed! :)

I know that sound and oh I do miss it from when I lived in the countryside in Cornwall. Love that photo of the fox with eyes closed - looks like my Bonnie when she squeezes her eyes shut if I am talking to her softly. I also love how wicked you are! Nothing mean about it - just a great sense of fun. Have a lovely day!

You know... we have foxes around here.. and I had no idea they screamed! We do hear Fisher cats scream though... it's a horrible sound.

I tried posting this once but I don't think it "took".

I have NEVER heard fox calls before. How interesting (and a bit scary sounding!)
LOVE your pics!!

We had one outside of our front windows one night. It's funny that I knew when I heard it that it was a fox even though I don't think I've heard the sound before...National Geographic shows! We have them in town and in our neighborhood all the time.

You are just a regular Jack Hanna! xoxo

We hear this sound sometimes on our farm, particularly, as you say, during the fox-mating season.

You never know, there just might have been a tiger loose from the carnival. We have an emu running amok around here, to the extent that emus run amok.

We have foxes here but I'm unfamiliar with their cries. Very, very interesting how many different calls they have.

Wild. I've never heard any of these sounds either and wouldn't have any idea what they were. I don't think we have fox in our area. They sure are beautiful creatures and those are outstanding shots of them you have here.

I've never heard any of these sounds before. It would be a little freaky to hear inthe middle of the night!

Neat story--I love that your colleague thought it could be a tiger----errr....I once made my husband drive back down the highway because I saw brown and black stripes in the ditch--it was a rusty corrugated drain pipe--all things are possible in my world!

Those are some really neat fox photos! ----Off to listen to the fox calls --don't think I ever knowingly heard them although I see them often.

I wouldn't have thought it was a tiger I would have assumed it was a murderous assault but then again this is NJ ;)

I didn't know a fox could make a sound like that!

I heard a fox scream one night, in Waynesboro VA. I was in bed asleep, and heard this scream, it was near the window. It frightened me something fierce, it was such an eerie ungodly sound, and totally alien to me. Man, I couldn't get back to sleep that night.

I love the last picture where it looks like the fox is chuckling. Probably thinking "silly man, I'm a fox, not a tiger". Love the pics.

My father-in-law used to hate that sound. It is kind of unearthly or something that I can't think of. Primeval or something! Thanks for playing that. I'd never heard it. That white fox was awesome, wasn't it!

Those are great fox photos--especially the last one; the fox seems to be in on your joke and laughing to himself ! Silly humans...

Ok, that was the coolest thing I've ever heard. Who knew one animal could make so many different sounds. Really, really amazing. I actually saw a red fox running down the side of the road last fall and when I drove past he dove into the canal ditch. I had no idea that we even had red foxes in Utah. Thanks for this. :}

Hello Miss Kate :-) Remember me! As I was playing your video of various fox calls my dogs were going nuts. I had the door to my veranda open and they were running out to the veranda and looking over to the forest! I have heard that vixen scream or mating call so many times- sounds like something is being killed...people have told me it´s a fox but I couldn´t believe it!! Recently we´ve had two foxes playing in the field by our home...funny little creatures! Your story is cute, although I think I probably would have been like your co-worker and wondering what the heck that sound was...

It really is a most bizarre sound, I hear it pretty regularly around here, though the first time I heard it way back when, I thought someone was being murdered.

I think you should most definitely call him Tiger... ;-)

It was good of you to identify it for him and all of us.

That would be a strange sound for someone who has never heard it.

The great outdoors could entertain me forever.

I have to say the first scream sounds a little familiar and we have seen fox here probably because of the Mississippi, but the howl scream...OMG if I were out somewhere and heard that I think I would have a heart attack.
Thank, I learned something cool today. (my first thought would Not have been tiger)
:-)

Too funny. I can't say I've ever heard a fox, though I have seen one around here a while back. Each of those sounds could be confused (by me) for human or bird noises. Tigers.. not so much. ;)

Laughing over here! Too funny. And those fox pics are astounding!

This may explain our years-old mystery. My dad lives in the woods and having lived there 17 years at the time we started hearing a loud roaring sound in the trees. We had NO idea what it was. We started recording the sounds, putting out motion cameras, and we would describe the sound to anyone we thought knew the woods well enough to figure it out.

In hindsight it may have been a fox. We did get lots of pictures of them but we were thinking it couldn't be... after 17 years you don't expect new sounds from your place of living.

None of the calls in the video are quite what we heard. It sounded less howl-like but more growl/roar-like. Still, fox is probably the most likely answer.

Thanks! I'm sending my dad a link to this post to see what he thinks. Our immediate reaction was a mountain lion/cougar too, which while unlikely, is possible in our area.

I can't say I've ever heard most of these calls, but I have heard some eerie coyote sounds before. That was a fun story though and those pics you took when you first started your blog are really great. xo ~Lili