I spent my weekend doing a little of this and a little of that, and have a few photos to share with you. Because it’s all about the pictures, you know.

The heat wave finally broke in the form of a vicious storm that blew through Friday around dinnertime. It downed trees, and took out power but when it was all over, cooler temperatures prevailed. 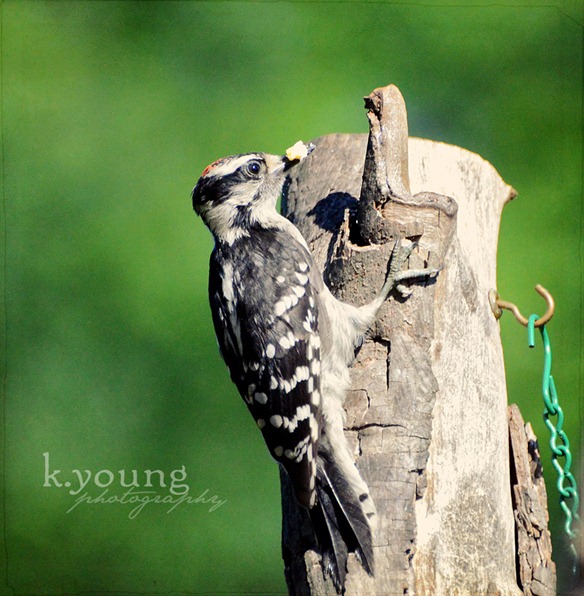 On Saturday morning before I started my chores, I sat out on the patio where I took pictures of the birds while having my coffee. I could not have done this on Friday, because the heat and humidity – even very early in the morning – was absolutely oppressive.

A male hairy woodpecker above. 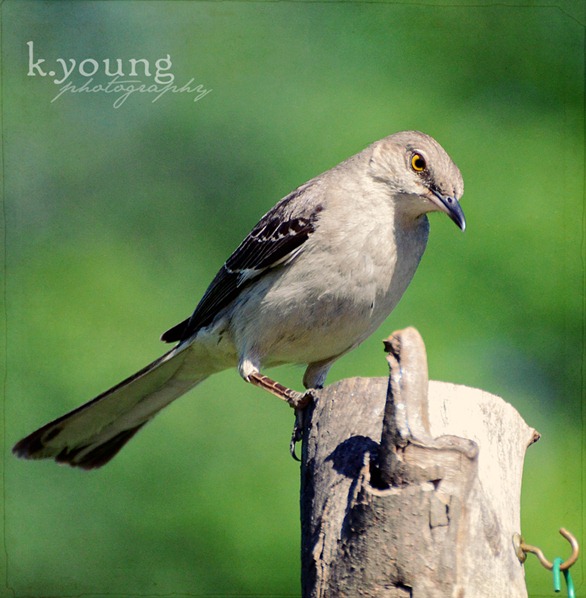 And a mockingbird. I had no idea their eyes were golden until I viewed this image. 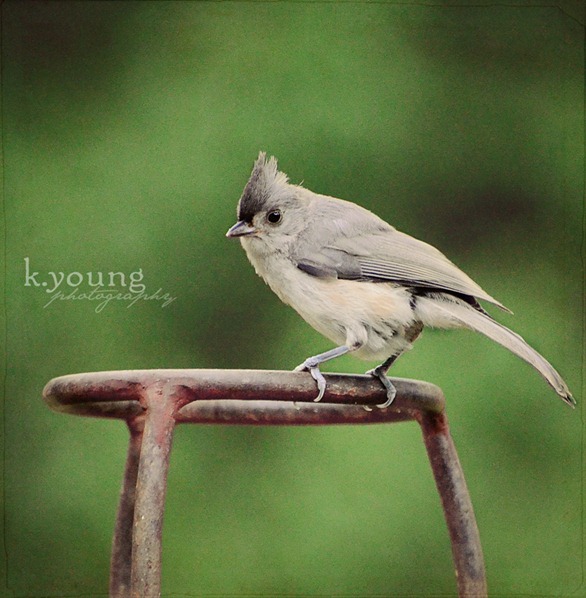 And my noisy little friend, the tufted titmouse. 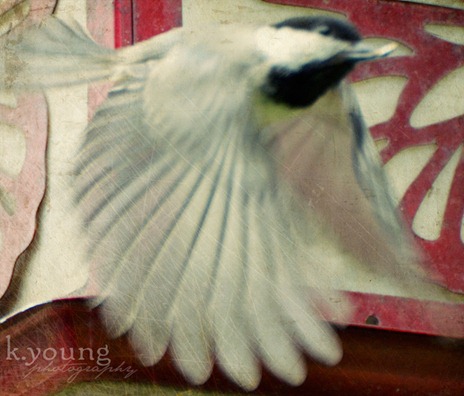 I caught some wing action from a little chickadee, but it was pretty blurry.

I got totally into two things over the weekend. One is a series I found on Netflix called Doc Martin. Don’t know why, but I can’t seem to get enough of this British comedy drama. The main character is a gifted and prominent surgeon who develops a fear of blood and is forced to stop practicing surgery. He accepts a position as a GP in the sleepy coastal town where he used to spend holidays as a child with his aunt. His interactions with the locals are amusing, and the scenery along the Cornish coast is really lovely. 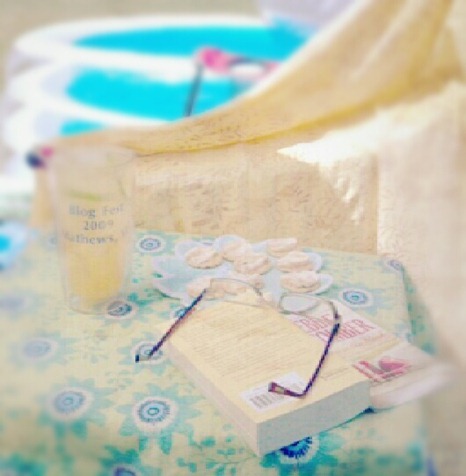 Instagram is a free camera app available for iPhone and Android. It’s pretty fun, and so easy to take pictures because I always have the cell phone with me.

I set the kiddie pool up in the yard over the weekend and snapped these pics, uploading them to Instagram after fooling around with them in other camera apps. 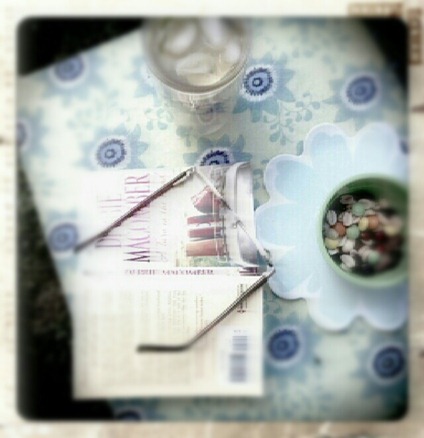 Some day, I’m going to have a real pool. 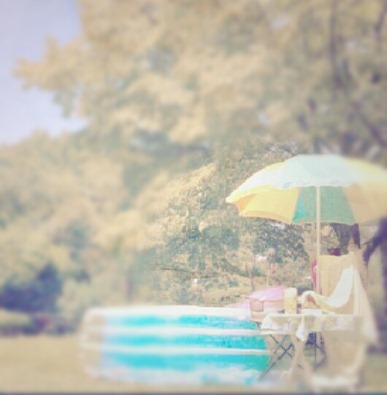 But until then, I can handle this. 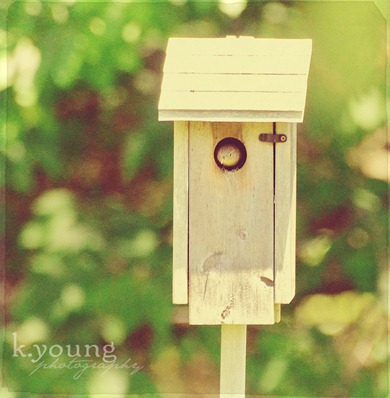 And finally, this short video is for my friend, Reena, who loves pelicans. I found this on Onecoolthingaday.com. The cinematography is just beautiful, and hey – I even learned a thing or two.

Hope your week is a pleasant one, my friends. Until next time, then ~

Awesome clip Kate. Thanks. Have a great week. See you tomorrow.

Love that photo of your mockingbird Kate...amazing!

Good morning Kate. Love your photos as well. Sadly I got a great closeup of a redheaded woodpecker but he did not live long after breaking his wing and more. I think he got caught in my garden netting eating my tomatoes. Sad.

i thought our heat was gone, but noooo, it's made a return visit and yesterday was awful.....by the end of the week 100 degrees. seriously? if this means another mild winter though, i 'll take it :)

Wow, that pool looks too deep to sit and soak your feet, you must have gotten into it, way to go Kate!!
How far away are these birds, and I'm assuming you use your biggest lens for these pictures.
Let Beth know that we'll be getting really high temps this week in MN, so she may getting it by the end of the week. Yuk!

Glad you are enjoying Doc Martin - love it too. What a miserable doctor, but a funny character.

I've never been a fan of Doc Martin, though I do like Martin Clunes.

I made my own calendar the other week from my own photographs, using Lulu. I'm not making it marketable to the public but just wanted you to know that it was you who inspired me to do it. I intend to buy a copy of it for a few friends and family for Christmas.

It was so hot this weekend, but managed to get several things off the list. The very long list.

So glad you joined IG, Kate! It's nice having longtime blogging friends to follow. And I always dig the birds : )

Hello Kate Love the pool - better than sitting in the heat without water around. I agree - one day I want a pool to swim in!
Doc Martin is filmed in Cornwall - that's where I used to live before moving to Spain - it's lovely isn't it?

W are just back from a w/e in the country and saw 1 hare, 1 snake, and 4 or 5 wild boar. No photos though as it all happened so quickly.
Kate x

I recognize that tumbler there poolside, hope something good was in it.

Adore Doc Martin - been on ABC TV for ages here. He's a crack-up and the scenery is divine... love most British TV. You watching Downton Abbey?

Your first image here is wonderful... felt like I could touch him!

Instagram. I know I should. But enough time spent on computers and photos already!!
♥
BB

Beautiful post, beautiful birds, and I love your pool. My neighbors, 2 doors down, have a built-in (sigh...)...something I know I will never have BUT I could handle something like yours. I like!

Argh! Blogger is giving me a hard time about commenting!

Mr O and I have been Doc Martin fans for a long time...what a cast of characters! Love it!

Nice to see you at Instagram! Beware its addictiveness:)

I'm addicted to Instagram. Is there a 12-step program?

I love your bird photography, Kate. You have such a talent for showing their personalities... We see a lot of bluebirds and swallows on our morning walks, but it's too hard to shoot while walking. :)

Hope your week is wonderful! xoxo

Beautiful photos of the birds! I love the Tufted Titmouse, as I think they are just so cute and full of personality.
We're supposed to be in the high 90's today and 100 degrees tomorrow and Friday. In fact, we're under a excessive heat warning from noon today until 7 pm Saturday (and it's only Wednesday!!!)

Oh, you knew I'd love that Pelican video! Thanks for thinking of me!
And I still haven't got my Instagram working properly!
Oh Well, got enough to be doing up here in Maine! Love your pool!
xoxo

Doc Martin is the best! We just bought series five from Costco, its on Amazon now.
Keep cool Missy!

Enjoyed all your birdie shots Kate! And I am back to a basic boring cell phone that doesn't even have a camera on it can you believe?! xo ~Lili