A few photos that I wanted to share with you this evening, taken through the window of the car while driving through Amish country last weekend. I edited them two ways, one using color and the other a b&w. 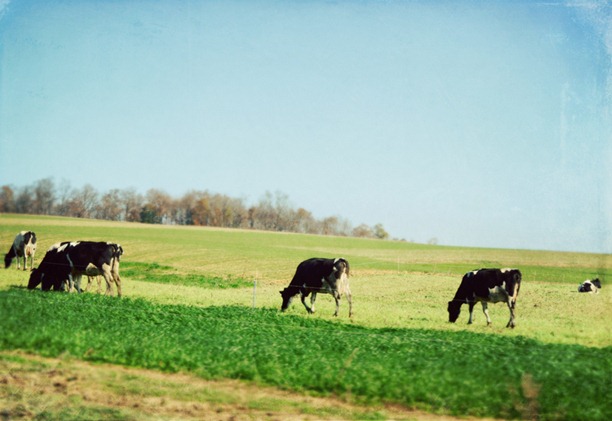 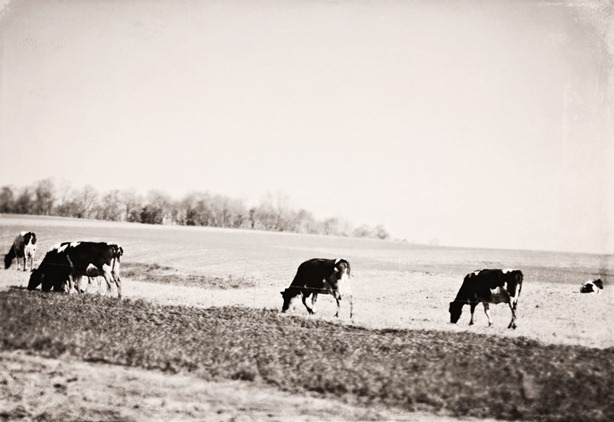 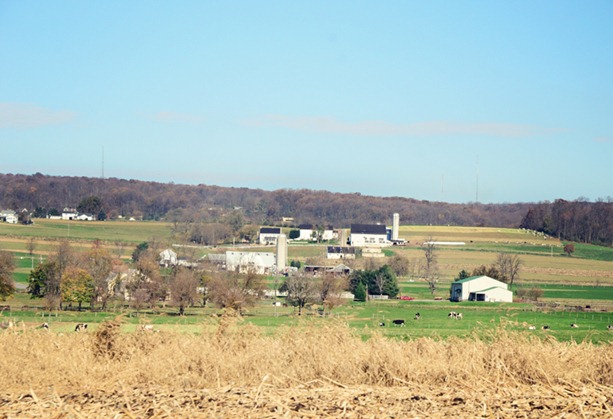 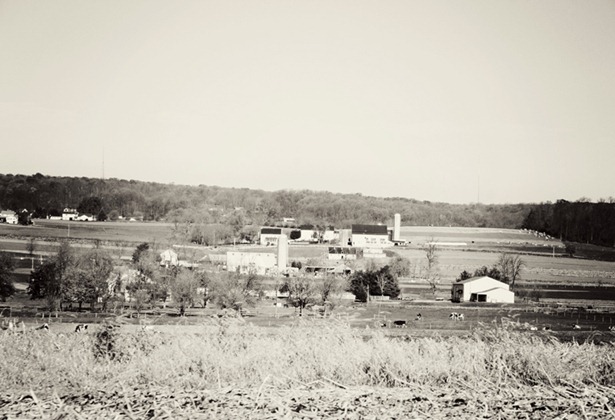 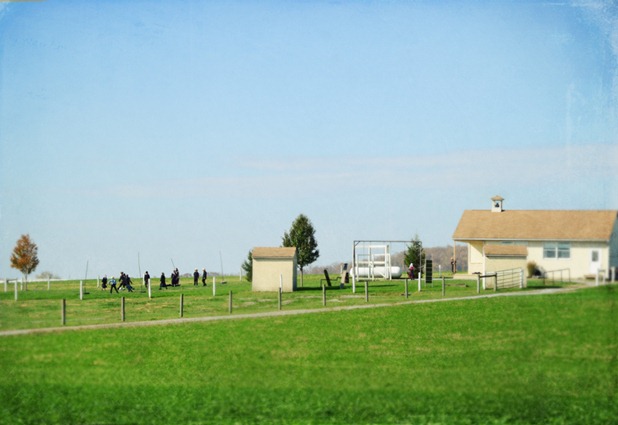 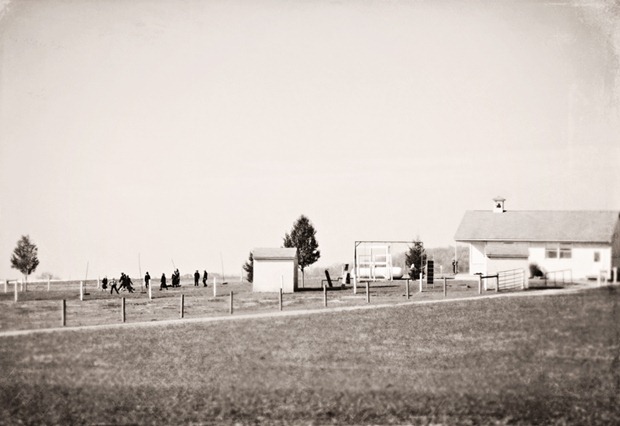 These were all taken last Friday, which will explain why children were at school. All their scooters were lined up against the building and it was a sunny day with a chill in the air. 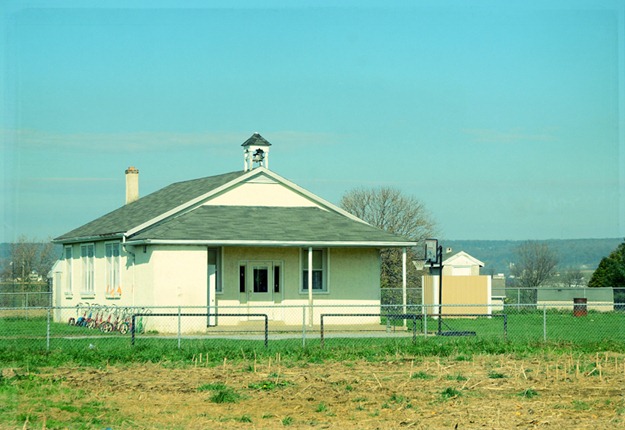 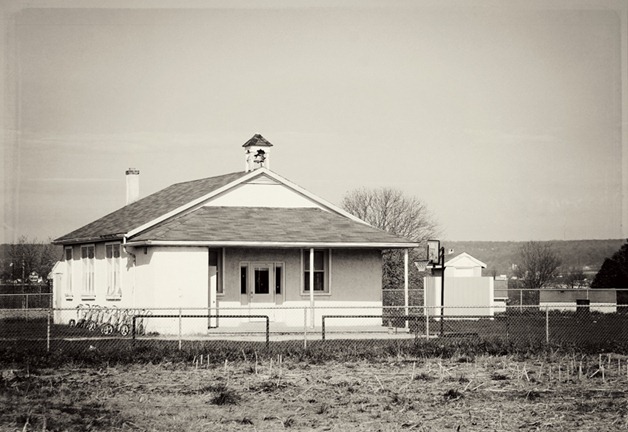 I called my husband on the way home from work today to say I was stopping at the store for milk. He told me there was no dinner planned, so if I wanted to pick something up, feel free. I was tired, and wished there were a drive through milk store, like the Brew Thru’s they have down along the Outer Banks in NC. I ended up picking up some frozen pizzas for dinner, and my husband put them in the oven.  While they were baking, I got changed, then went online and checked my mail and at a few minutes to six, my husband asked me, “so how are the pizzas doing?”

What? I was to keep track of the pizzas? I ran out to the kitchen to discover the cheese pizza completely burnt and the other, the spinach one, was still ok and had some time on it yet. Someone was mad, someone was trying not to laugh when he came down to dinner (our son), and I was just bewildered.

I ate the spinach pizza – the others had leftovers from previous dinners.

What? You don’t find this terribly intriguing?

On Saturday night I watched a movie I’d seen before and liked well enough to watch again. If you enjoy Downton Abbey, and a little bit of a ghost story, you might like this ‘watch instantly’ family selection from Netflix. Although it’s nothing like the story line in Downton Abbey, there are similarities. In fact, three of the characters and an estate that looks very much like the manor house appear in this film. I just love Maggie Smith, too.

When 13-year-old Tolly returns to his family's ancestral home to spend Christmas with his grandmother, he becomes so entranced by the history of the mansion and its inhabitants that he manages to travel through time to uncover their secrets.

From Time to Time is the name of the film.

It is not going to win any awards. It’s just an easy film to watch.

My new favorite make-up addition which came as a free sample from Sephora:

I wish my husband would stop buying double stuff Oreos. And that’s all I have to say about that.

I’ve sold several of my Female Cardinal in snow prints, all in the past couple of days. I’m not sure if it’s due to its appearance on one of the etsy treasuries it’s been featured in, or the Pinterest pin it’s on, or what ~ but it’s nice that people like it enough to buy. 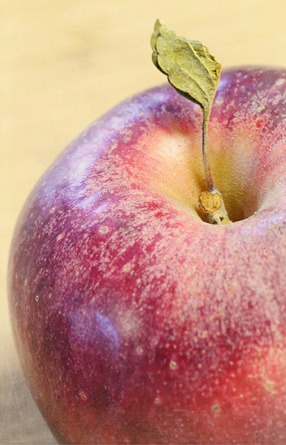 This is what I should be eating, rather than double stuff oreos.

Thanks for stopping by, my friends.

Wonderful photos from your drive thru the Amish country. I love all the color versions of your photos. I guess I just love color. Congrats on selling your Cardinals photos, it is a pretty shot! Have a great evening!

Hi Kate
Love the pictures and laughed at the pizza thing. Have you watched any of the breaking Amish tv prog? Am totally amazed at their language and their behavior. Thanks for the movie suggestion. Blessings to you all. Take Care Mary

What a wonderful drive...such beautiful countryside! Pizza thing too funny! Oreos ... hubby better never never never bring those home! And I so love your female cardinal. An awesome shot!

My husband made brownies this past week-end, but I have to take the blame for the miniature Snickers and the Reese's Peanut Butter Cups and the Rolos that keep multiplying in the candy dish. My bad.

That photo is so beautiful and magical.
Sorry about the Pizza's. darn it.

Of everything you wrote this is probably the least important - but damn - double stuffed Oreos are good!

Loved reading about ALL the goings-on with you and the family, Kate.:)

Yes - that apple over the double stuff would be a better choice - but - is it as much fun?!?

I like the yellow Oreos. I introduced them into this house once and now curse the bags every time someone else brings them home.

Gorgeous Amish country photos - the black and whites remind me so much of my childhood in NW Pennsylvania. Great pizza story - good thing there was leftovers!

As a proud owner of your Female Cardinal in Snow I commend those buyers on their excellent taste!! It is a gorgeous print and I get so many compliments on mine.

I debated between the cardinal and George for about a month... George won out, but I still do love that cardinal!

I could imagine your frustration over the pizza. Aaaargh!

I love the amish pictures.. I think their simplicity appeals to many of us in this crazy busy world!

I love random posts like this! So have you seen the show Breaking Amish? Holy moly...I am addicted! Sorry...but when I saw your photos I instantly thought of that show. As far as Oreos go...so much better than an apple! Sorry you burned the pizza! :)

What, he expects you to bring home the bacon AND burn it up in the pan?

Well that is a lovely picture of a female cardinal in snow! :)
It feels so strange to be cooking alot again now that we are settled in our new home......tonite its meatloaf! Last couple days it was barbecue ribs in the crockpot.....feels good not to be eating out so much! Hugs! deb

LOL. I'm glad you got the pizza all to yourself. And I am a proud owner of Mrs. Cardinal. It is one of my favorite possessions. xoxo

I love the scooters lined up by the school
and the school house itself, it's wonderful

I think you should creat an apple double stuffed oreo dessert :)

Congrats on your sales!

I've done that pizza thing too. As for the orios - I'm not sure I've seen that particular variety but they sound pretty good, if not what we SHOULD be eating!

men ... thats all i am saying about that

i like the color .. the monochromes in my opinion need more oomph ... you can't see the detail as well

you just cracked me up !!

the whole pizza thing is something that would so happen at our house, too.
at my son's condo, when his dinner was getting a little too well done, the ghost that lives there threw a bag of chips on the floor, that had been sitting on the kitchen counter, just to get jack's attention.

oh, i haven't told you about his ghost ?

anyhow....i love stopping here, but wish i was stopping at your house to sit and have these conversations :)
xo

That last picture and the words under it struck a chord. I have had my niece staying and this morning we had a hot chocolate and a toasted tea cake out - we didn;t need either and now I feel I never want to eat again.

No dinner, huh?Well--they could have had the leftovers they ate, anyway! Son needs to learn how to cook for mommy!
Bluebird (Trudy)

My daughters took me on a trip to Sephora...they said I needed to know......???
MY husband buys POTATO CHIPS.....and I have NO resistance when it comes to them.

I love the black and white, it seems just perfect for the subject matter.

Boo on the pizza... but it sounds like it all worked out okay in the end?

And I love your cardinal photo, it's so pretty. Then again, I love all your bird photos...

I see that beautiful female cardinal photo every day at my desk...and it always makes me stop and look and smile:)

I'm glad you had the spinach pizza:) serves them right!

I usually prefer color photography but in this case I have to say the black and white is perfect!

Your female cardinal in the snow is one of my favorites! Oreo double stuffs...boo...apples yay! xo