The art of going 'crackerdog'

The other day, I mentioned on a post that I'd almost gone crackerdog and was surprised to find so many people who knew what I was talking about. I'm so glad, because when I say it in public, nobody seems to know what I mean. 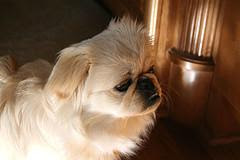 I'm sure you've all heard of James Herriot, the beloved veterinarian and bestselling author from Yorkshire, England. I loved all of his books, beginning with "All Creatures Great and Small" and I think I've read almost every one. My husband and I used to watch the television show of the same name and can sometimes still find it playing on BBC. One of my favorite stories concerns a client of his named Mrs. Pumphrey and her obese little Pekingese dog, Tricki Woo.
After I wrote that post the other day, I searched my entire house for my "Dog Stories" book by James Herriot and could not find it. And then I remembered that it had been destroyed in a freak flood that had run through the garage of a home we were renting in Pennsylvania. I lost several boxes of books that were stored out there. So I'll try my best to remember the story about Tricki Woo. Tricki Woo was an extremely pampered and spoiled Pekingese pooch whose wealthy mistress, Mrs. Pumphrey, showered not only her affection upon, but everything in her pantry. She also coined her own names for afflictions from which the little pooch suffered, and all the maladies were caused by the overfeeding and pampering of the little dog. When Tricki Woo would go 'flopbot', it would mean he would just sit down and drag his butt. And when he would go 'crackerdog', he would run all about like a crazy dog. (Probably due to massive quantities of sugar that came from the treats she fed him constantly.) When she first called the veterinary clinic, James Herriot took the call and ended up going over to the lavish estate to see the patient. Immediately, he assessed the situation, but Mrs. Pumphrey would not listen to the young vet. She continued to feed Tricki Woo until she finally called one day to say he'd gone flopbot after a session of crackerdog. Tricki Woo would not move. The good doctor removed him from the premises and took him home to care for him. Tricki Woo stayed away for couple of weeks, getting regular feed and running with the dogs that lived with the veterinarians. He slimmed down, got healthy, and was returned to Mrs. Pumphrey "A New Dog". For years afterwards, Tricki sent James baskets of the most amazing treats, including champagne and special cheeses. The other vets used to tease James, but they were all secretly jealous that they hadn't answered the initial call from Tricki's wealthy mistress.
I loved the crackerdog story, and told it to my sons when they were little boys. Consequently, one of their favorite things to do was to 'run about crackerdog' which was fun because they could run around like crazy, waving their little arms and laughing. It's a happy little memory I have of them when they were small, and times were sweet, and I lived by the adage: "Cleaning and scrubbing can wait 'til tomorrow; for babies grow up, we've learned to our sorrow. So quiet down cobwebs, dust go to sleep. I'm rocking my baby, and babies don't keep."
Not that I didn't keep my house clean, mind you. But I loved playing with my children, and I knew they wouldn't stay little for very long.
And that's what crackerdog is all about. 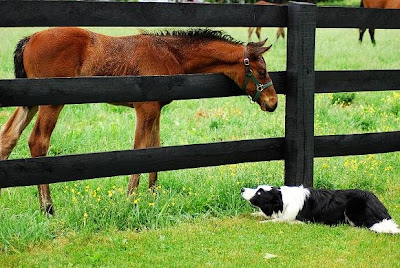 And I'm going to go crackerdog on George here if he decides to nip this little foal. He looks like he's getting ready to, doesn't he? Don't worry. I had my eye on him, all right.
Top photo courtesy of Pekie on Flickr.com.

I enjoyed your reminiscence of Tricki Woo. I, too, loved the James Herriot books and TV series. Me'thinks I need to get a couple of Herriot books from the library this week and do some re-reads.

My husband is flopbot on the couch. And most ironically, my daughter is reading "Dog Stories" right now - this very minute probably, in the guest bedroom, since she just went to bed. *cue Twilight Zone music*

Either that, or he looks like he's going to "womit!"

Loved All Creatures.. so many colourful characters. Thanks for the Tricki Woo reminder. :)

My mother-in-law recently gave me the dog stories on audio book. That's why I recognized the term right away. I hope you get a replacement for your copy of the book. It's a good one.

Thanks for reminding me about the James Herriot books, and tv series, they were great. I am just anazed that you can remember all that story without referring to the book. I remember it now you mention it. My kids have memories like yours. I used to read them funny stories from my books, and they are the ones that remember and remind me of those bits! Shows my brain is on the way out!! I love your blog...hope the broadband is working out ok finally. I am amazed at your photography also. Good on you!

I had forgotten this story. Will have to see if I can dig out this book for my daughter and I may just have to reread it myself!

Oh, please don't think I'm that great in the memory department! I remembered the gist (sp) of the story and had to google the rest!

Welcome to Annie L.!! So glad you stopped by to visit.

Oh thank you for the memories! I just finished a book just last night and think I'm going to read a Herriot book again. Been years since I read one. :)

What a fun story. My kids go crackerdog all the time. I'm going to have to find that book, it's one I don't have in my collection yet.
The picture of George and the foal is so cute!

Oh, my husband and I loved that TV series, and we found thte books years ago at a second-hand shop. I wonder if I can find the DVD's for sale somewhere...

Love the pic of George and the foal -- it's a great pic and it tells a story, too!

Sunny day today here in Jersey, how about you?
xoxo,
Mary

We both love that series on tv. This made me laugh again and I hadn't thought of it in years. I really should read the books. Great picture of George eyeballing that foal.

Kate, your stories are so great. You probably don't think so, but they are so entertaining and your pics are great. Just like you.

I have four hard-cover books by Jamies Herriott that used to be my parents'. And I've read them and used to watch the series faithfully. Wonderful stories and I remember the one about Trickie Woo. It was so touching and funny at the same time. Thanks for taking me back to a more innocent time.

Just lovely...James Herriot is one of my favorites, and the fact it brings such good memories to you and your boys....what a good added bonus. That George! What a dog! Only every once and a while do you get a dog like him. We've been blessed twice.....and I'm thinking the doggy we have now may be our third blessing.

I was looking for a Web site to explain crackerdog (to a Border Collie owner, no less) after I posted about my Lab mix going crackerdog and trying to run over me. She kept going around me and veered off to chase the long suffering horses. All the dogs joined in for a snack of horseapples-eww.
Love your photos.

I identified with this post immediately. My little dog, Mya, is a Pekeingese. She is spoiled rotten although I don't feed her people food (very often!). She goes "crackerdog" sometimes but I'd never heard that term before, I love it!
And the adage about rocking babies is very poignant.

"All Creatures Great and Small" is now available in full on netflicks.com . I'm watching it through for the second time now. Very humorous and educational. Mrs. Pumphrey's Peke, Trikki Woo, going Crackerdog is the best part of the whole series. So.."Bob's your Uncle" and have a great day!

I'm so glad you posted this! My mother used the phrase "crackerdog" the other day and I remembered it came from a book she read me when I was young, but I could not remember anything about the rest of the book! Reading your synopsis was like stepping back to my childhood for a moment. Thank you. :)

Flop bot was indeed rear refusing to lift off ground but is cured by expressing his impacted anal glands (S4E1). Now “cracker dog” I would cleanly describe by the fact I believe the name expresses, cracker, as in “Christmas cracker”, loud noises and things flying explosively out (same end as in flop bot) all of these problems being caused as already correctly stated, Trikie Woos masters poor choices for diet, amounts, and extreme lack of exercise ( her ideas of Trikies exercise being for her butler Hodgekins to carry Trikie around the garden several times. Sorry if I sound like an ass but I love the show and am the offspring of a veterinarian. And the best thing about this show having been the book it was based on being all true life stories from the memoirs of an actual English vet who required them to stay within the bounds of his book for the first original tv series. And I remember from growing up that pet owners and farmers are definitely that weird and nutty if not worse at times. Peace

Now that I think about it again “cracker dog” could apply to either end. He was seriously sick with cracker dog several times in story line and I’m sorry to say running around brainless itself doesn’t make you be at deaths door where fulminating vomit/diarrhea are indicators of more serious conditions occurring possibly from the diet issues mentioned.