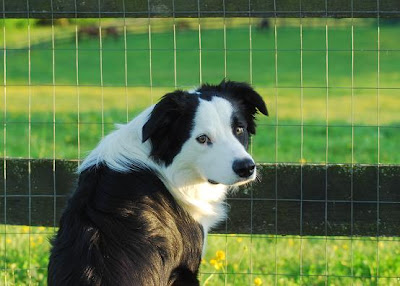 Look at this face. Does he look like he'd ever do anything terribly wrong? I can't let you all think that he's a perfect angel, because he's not. Yes, he's a good dog. But today, he and my husband had a near-altercation. And by the time I returned home from work, George was skulking about as my husband began to relate the sordid tale to me. Oh, I feel as if I'm tattling on him. But what he did was bad. 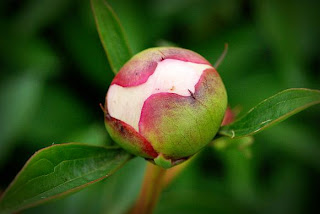 Every day, George gets to ride along with my husband in the truck, as my husband makes his many stops to prepare for the daily breeding. There are mares to check at all the different barns and oftentimes, George is let out of the truck to visit with other dogs. When it's time to return to the truck, he usually always comes running. Not today. Today, he did not come running. Not just once, but three times. And the third time was when my husband pulled up to his office to make a phone call. He left the truck window down because it was getting just a little warm. When he returned to the truck, George was nowhere to be found, nor did he come when called. My husband had to check his temper, I'm sure. 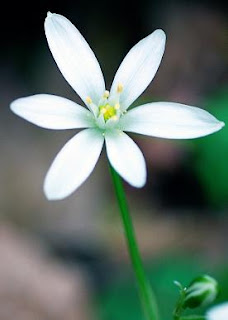 Finally, George arrives. He'd probably been off sniffing something or *gasp* chasing something. This is not good on a horse farm. My husband drives him home because the dog's rounds with dad end at 10:30 AM. My husband opens the car door and gets out, telling George to get out. George refuses by turning his head. Then my husband comes around to the other side and opens the door, telling the dog to get out. George promptly jumps into the driver's seat. Of course, now my husband is mad and he reaches for George, who growls. Growls! Look at this sweet face. He has never growled at me. That's when my husband yanked him by the collar and pulled him from the truck and told him he was bad. I believe in karma, though. My husband wrenched his back pulling the dog out of the truck. It's not terrible, but it hurts. And it's bad karma. 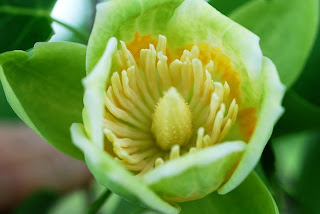 The dog is still skulking somewht. If I were in charge for the day, he would be kept home tomorrow as punishment. He would not have the doggie door available to him to go in and out of the house as he pleases. He would have to play by himself with his toys and his sticks in the yard. I felt bad for him, even though he growled at my husband. But it's a bad thing to growl at your master. I took him for a walk anyway, and I went slowly because today for some reason, I'm tired. I took the macro lens with me and got these pictures. George stayed right by me because he could tell he was still in the doghouse. 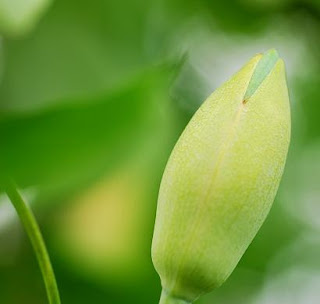 The first picture is a peony bud. Soon we'll have massive amounts of flowers. It's the best the peony plant has ever been and I'm glad of it. Such a rich, wonderful aroma these flowers have. Then there's a little white flower I saw in the woods. I should know what this is, but I don't. And finally, a bud and a flower from a tulip poplar tree. I can see George outside now, on the deck. He's solacing himself with a rousing chewing session on SC, otherwise known as Stray Cat.
Before I end, I'd like to thank Lori, one of our librarians at the school, for lending me our school copy of James Herriot's Favorite Dog Stories. I've been reading it all evening.

Oh, George. I hope he gets over this testing phase quickly. It's my fear of fears that my dog will refuse to come when I call, so I don't ever let him off leash. It's the lazy way of dealing with it, I know. But he's a spoiled baby, and I don't have much authority with him.

How very lovely to know that I don't have the only naughty dogs in America! I LOVE George!!! He's better behaved than any dog that's ever owned me!

I'm reminded of the time that my next door neighbor asked her son why he was good for everyone else, but could be a little stink at home? His answer was, "Mommy, I can't be good ALL the time." I'm sure that George feels the same way. No one can be good ALL the time. But as a woman who deals with a dog that REALLY isn't good ALL the time (I've lost many a shoe to that little booger. She's hubby's dog.) I wouldn't take him out tomorrow either.
He looks so cute when he sulks though. MY dog sulks cute too and it gets me every time!

Loved the bud and flower photos interspersed with the George story!

Dogs are people too Dad! I am glad I stumbled on your blog from PW's. I am a horse lover but do not breed. I have a morgan mare and an appendix gelding. Also 2 female boxer dogs and a loving family.

Nice to meet you!

Also, I just got a brand new camera. It is a Canon S5 and I have not figured out everything yet. I started reading about it last night but was so brain dead from work I had to put it down. I look forward to many more pictures on my blog.

Hi, just came from Mental P :) I'm already in love with George! He is adorable and I've enjoyed my visit :) You take beautiful photos and I will be back!

I think you made this up. George would NEVER growl at anyone... I'm sure of it! He's just too...too...CUTE.

Welcome to Trailboss and Debbie in nc. So glad you came for a visit!

Kacey, I am not making this up. I can't believe he growled, either! He's never naughty for me, only for his father. But I'm away from home all day and my husband is the one who's always with him. Must drive him crazy . . .

George, George, George!! You KNOW better but just wanted to show your master you could make your own decisions, too, sometimes...!!! But the consequences were, well....!

I had to laugh - in a polite and deferential manner of couse... My dog, Bailey, sometimes decides he is going to take a little run despite my calls to him. But he always comes back. My biggest fear is the road. Trucks and cars go by very fast at times and if Baily were smelling something or running across the road, that would be the end of him.

Oh well. What are you going to do? I guess you have a responsibility to help them learn good manners but sometimes it is hard...

I hope George and his male master make ammends soon!!

I don't know how anyone could stay mad at a face like George's! I loved the pictures by the way!

LOL - sorry, I just had to laugh, you know by looking at that face that sweet little George was set up! LOL He'd NEVER do something like that! I'd like to hear HIS side of the story!! LOL

I'm so glad I stumbled upon your blog - it's just beautiful!! I hope to get a digital slr camera some day!....a girl can dream can't she!

Have a wonderful day!
~Cheryl

Some days are just like that. George was having a baaaad day. Poor George. Great photos as usual.

George is gorgeous, as are your photos. I love the look on his face in that image.. you've captured his personality in words and images beautifully.