Welcome to my home

Have I mentioned the fact that I live in a mansion? In the acreage out back, there's a helipad, and to the right is a barn. The driveway is lined with shade trees and it's just beautiful. Nah, I don't live in a mansion. I did at one time, in one of the many homes that we've lived in as part of my husband's salary for working on a horse farm. But that's another story for another day. Today's short story was brought on by a memory that I had while driving home under gorgeous skies. About 2 miles from our house, as I was passing the home pictured above I suddenly remembered the times when I'd bring home my son's friends to spend the weekend. You see, because we live so far away from well, from other people, I always had to import friends for my kids. My one son, Shaun, had lots of friends who always wanted to come and stay over our house. They'd visit pretty regularly, from middle school age and on, until they were in high school and had their own cars, and they were still coming. But while they were young, and I was driving them, I remember several instances where I was bringing about 6 of them home in our old Eurovan, and there was always someone in the group who was coming over for the first time. And what I liked to do was to pull into the driveway of this house, and slowly start down the lane, as if we lived there. Before we got there, the kids in the car (read: the kids in the know) would be telling the newcomer that, "yeah, Shaun's house is awesome! You should see it; it's so big. There's even a helipad for their dad's helicopter." And then we'd be slowly driving down this driveway, while the kid's eyes are popping open, and then I'd stop and they'd all start laughing and yell "psych!" Imagine their letdown when we pulled into the real place: Nah. Gotcha again. But we did live here at one point. This is the little temporary house at the entrance to the farm. It's the house that we lived in when my husband first took the job here. We were told at the time that it would be a 3-month deal, as another house would open up by then. Well, when that didn't happen, the owners of the farm decided they needed more housing for their staff, so a new house was built for us. We ended up living in this teeny tiny house for 11 months. We've been in the new house for over 8 years now. It wasn't until we moved here: 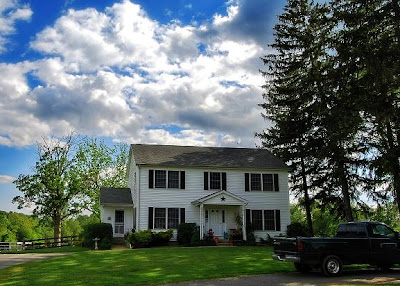 that we had regular visitors all the time. Shaun's friends were always here, and little did their parents know, but I had them do my housekeeping on Saturdays. The first time my husband came home to find 6 boys sweeping, dusting, cleaning the downstairs bathroom and doing the dishes, he was shocked. "How can you make them do this stuff?" he'd ask. "Easy", I told him. "I ask them to." Maybe it sounds mean to you, but it didn't happen that often, and besides, they were glad to do it. They'd always want to come over, and I'd warn them in advance that cleaning may be involved, but they always had fun, they were fed well, and they always enjoyed playing the mansion card on the unsuspecting newcomer. 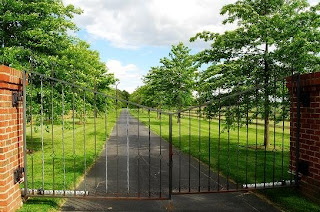 The boys loved taking the little boat out on the pond, and playing football, and walking in the woods with the dog, and it was nice to have them all here.

I haven't thought about those days in a while, but today, while driving home, I noticed they had put a fence up at the end of the driveway of the mansion house. And I laughed and thought to myself that it was probably to keep crazy people like us from driving down it, pretending that we owned the place!
No Weekend Guessing Game tonight. I'm postponing it until next weekend. Apologies to those who look forward to this, but I've got a lot to do this weekend.

Great story! We were always too embarrassed of our small house to have our friends come over. Such a trivial teen I was.

What a great story! When I started teaching up in the wilderness, I bought a split-level house (it was the ONLY house for sale OR rent in the area & I transformed it once I got there)...but I digress. Anyway, my kids hadn't seen it so as we got closer I spotted lots of ramshackle cabins & cottages along the way, so decided to tell the kids that one was our new home. They were shocked - for like one second - they know me TOO well. But it was fun...like for you and your sons and their friends.

By the way, LOVE your new banner at the top. Perfect for this time of year. Have a great weekend - and you know, I actually DID come by for the weekend guessing game. I never time it right, do I? lol

You know, I actually like the little house. It's adorable, and it's my kinda house. It would suit me just fine. Can you mail it to me? :-)

What a cute story!! I liked all the houses, even the tiny one! ;) I've been in (note: not lived in) some pretty amazing mansions in my life. But I'd rather live in a small house and have a huge barn. Hee!

What a cute story and how fun to trick the kids. Love all of those houses.

Great memories. My kids always brought their friends to our house....we would have cookie decorating parties, scavenger hunts, all kinds of stuff. My husband would tire of this but I always wanted to know where my kids were and if everyone was there then I felt good. They still remember all the good times.

I like the little house, too. When I see mansions like that all I can think of is all of the rooms to clean! LOL

I told my hubby if (when) we ever have enough money to buy our own home, I'd prefer a little house and lots of land versus a large house and no land.

What a great story. I think it's great that you got them to clean, and faked out the new kids. The grounds to that farm are amazing! Your house is beautiful!! What a great place to be.

Such a beautiful place. What can I bring;)?

What a beautiful area you live and that's a funny story!

It sounds like your son had a lot of fun growing up.
Now your sure the last house is the real one.

...Hello Kate! What a great story... I for one, love the little house over the mansion - that is just too cute! And the white two story house is beautiful too... You know where this leads you now - you must show photo of your current house! ;o)

...Blessings and have a great holiday weekend! :o)

...Oops! The white two story is your current home? Sorry - I didn't realize 'til I read the above comment... You're still so dadgum lucky! ;o) Beautiful home Kate!

Yes, the third photo is really the house in which we currently live. Sorry for the confusion. It was fun, at first, in the little tiny house. It had a kitchen, a living room, 3 bedrooms and a bathroom. And everything was small. Even the closets, which each bedroom had. Like I said, at first it was fun. But with a family of four, a dog, two cats and a litter of kittens, it wasn't so fun anymore and I couldn't wait to have some space! It would be fine to live in now, with just my husband and myself, but still . . . my current house is so much better. Plus we have the pond, and the incredible views.

Thanks for visiting, everyone!

Said it before and I'm sayin' it again. You live in the middle of paradise, Kate!