An evening walk and some answers to questions 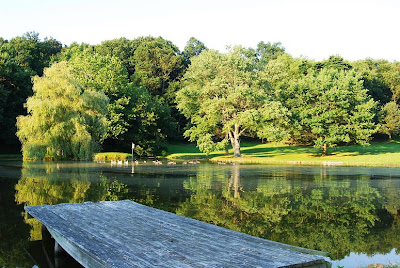 After dinner tonight, I took a walk with my son and George. Shaun hasn’t seen much of the farm yet, so I thought I’d show him around a little bit. The first picture is of the pond. There are geese over on the other side of it. George chased them into the water. I’ve received a lot of questions both on the comment section of posts as well as personal e-mails and I thought I’d answer a couple of them here because it’s just easier for me that way. Hope you don’t mind. 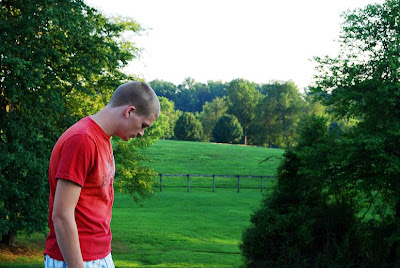 Will you be able to keep the same job? I’m not too clear on that. Yes I will be keeping my job. I’ve been there for ten years now and it’s just an extra 10 minutes to get to work. Well, in the summertime it is. Once school starts, I’ll probably get behind every bus in creation and it will end up taking a lot longer. But I’m not going to think about that today. I’ll think about it tomorrow. 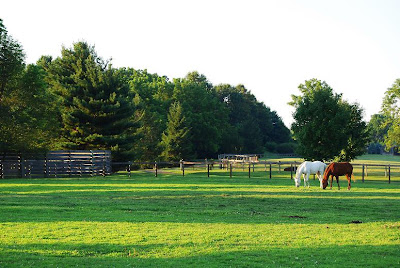 Where, exactly, have you moved? Well, I can’t really say because I don’t think it’s good to let people know exactly where you live. I mean, it’s allright if all of you know, but the creeps out there . . . I don’t need them knowing. I will say that I live in southeastern Pennsylvania, just over the Maryland border. I think that’s saying enough. Did George get a job on the farm, too? It's funny, because when we came for the interview, the first thing the owners said was, “Oh, my! A border collie. We have sheep!” To which I thought they were saying, “Oh, no. A border collie that will chase our sheep all over hell and creation!” So I immediately assured them that he was very well-behaved and he wouldn’t go after their sheep. But then we got to talking, and I realized that they thought it might be a good idea to train George to herd the sheep for when it’s shearing time. They told me it was really difficult getting the sheep into the shearing pen without the aid of a herding dog. How did George take the move? George was great, actually. I thought it would be a huge problem because we used to have a fence all around our backyard. But he pretty much keeps to the area around the house. Well, unless someone that lives here is walking by. Then he runs over and introduces himself. And if there are dogs with them, he’ll follow them. So we have to keep an eye on him. He does get to go to work with my husband, though. So he's a very happy dog right now. And very tired when the day is done. This is good. 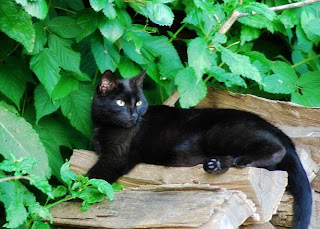 Our cat, Blackie, on the other hand, took a couple of days to calm down and settle in. She spent all of moving day in her crate, even after we opened it up for her to come out. Then the next day, we let her outside and we didn’t think we’d ever see her again. But she’s fine now. This place looks even prettier than the last one. Is this the case? Well, we’re in a different setting here. The farm sits in the midst of steeplechase and show horse country and let’s just say that it's a little more 'moneyed' here. I don‘t know how else to explain it. Also, the soil is different here and it has better water-retention properties so the grass is really nice and green and soft. And around my house is a lot of good shade and mature woods. My husband and I both think it’s prettier. Are you out in the middle of nowhere? How far is the closest mall? I wouldn’t call this nowhere, not by a long stretch. I will say that developments and tract housing is not exactly right nearby. The closest mall is probably about a half hour away, and a grocery store is about 6 minutes. But it’s really expensive and we have to find a cheaper place to buy our groceries. 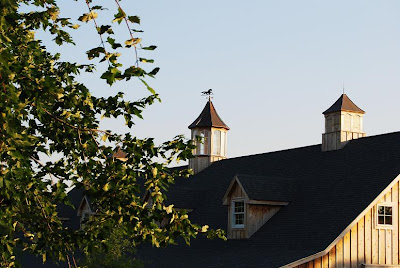 Is this a dream job for your husband? A dream job? Well, I don’t think I‘d call it that. He works hard. And it‘s hot outside. It’s not that it’s perfect, but it was amazing that after I sat down with him and asked him exactly what he could see himself doing, we found just what he told me he wanted. The money is probably a bit less, but it’s not about the money. I’m still reeling from the two-week turnaround. Suddenly, I’m in a whole new life and it’s pretty exciting, actually. I think that about answers all the questions I've received over the past several days. And now, I'm going to put my feet up and visit some of my favorite blogs. I've missed all of you!

...Your photos are so beautiful - it looks like heaven there...

Very nice. It is good to settle in, yes?

Well, I am so pleased for you and your husband Kate. I am amazed that all happened for you in two weeks. The power of prayer is tremendous isn't it? God Bless you all , Annie
ps I am also so pleased that you have fast internet, it makes all the difference doesn't it?

Kate, I'm so glad you are all moved in. Now comes the fun part -- exploring and taking pictures! LOL

I don't think I have ever seen Blackie before -- she's beautiful. And the pond -- ooo, I've always wanted a pond!

As far as shopping is concerned, I would not worry about going to the mall. But you have to find a thrift store nearby, because the best ones are always in the "moneyed" areas. I'll bet there is a great one in that part of PA.

OK, now that I have planned you next few days, I'll leave you to it. LOL
xoxo,
mary

Geez, it really is beautiful there, so happy for you.

Wow! What an incredible story & turn of events! I am SO happy for you! Both of you & George too! It is absolutely beautiful there! Yes, the power of prayer is amazing!
Relax & enjoy yourself now!

Thanks for the update. It all looks and sounds fabulous! I'm glad you'll get to keep your job. I'm glad you're getting settled in so quickly.(P.S. I agree with Mary, you gotta find the thrift store! hehe)
*hugs* Shimmy Mom

It sounds wonderful! Thanks for answering all our burning questions. :)

I'm very glad for you guys - it is lovely there. An adjustment I am sure after being in the same place for so long, but new adventures await.

I love the new vibe in your words. Your writing is joyful and happy. I'm very happy for you and your family. Looking forward to more pictures of the new surrounding.

wow beautiful place I LOVE LOVE LOVE the picture in the previous post of the trees and the grass and its just stunning!!!!!
Glad you are adjusting and setteling in!
Hugs and prayers Laura

Surrounded by all that beauty, how can you *not* be snapping pictures all the time. I'm so happy that you all (even Blacky) landed on your feet. It sounds as though George is going to have an amazing life there, herding sheep. It couldn't have worked out better.

Thanks for the question and answer session....and I've finally read some back posts and got caught up on whats been going on in your life. I got teary reading the post about the woman who prayed for someone like your husband. I firmly believe things are meant to be. Change is good.

I am excited to see pictures from your new farm. And to hear about George's go at becoming a sheepdog. Maybe he needs his own blog? ;)

Wow, I've really been behind times! I have been amazed at your story, and so very happy that you are in such a beautiful place again. Our God is so amazing and greatly to be praised! There's a beautiful verse, I can't find it at the moment, but it says that God knows His plans for you, plans to prosper and not to harm you. I'll have to find it for you.

So glad things are going well for all of you. It's good to hear your happier "voice", Kate!

Thanks for the photos, Kate. Your new 'digs' are in a beautiful setting. I wish you and your family much happiness there.

Thanks for all the answers to the questions and the lovely photos. so glad it's working out okay!

Oh, I think you've landed in a beautiful place! Just your cup of tea!

Well, it has taken me a while to catch up, but I'm glad you posted about your move. I was wondering where you were headed and what you were doing.

Too bad you're not closer this way though. I'm glad you sound happy.

Finally catching up. I'm glad things worked out so well for you guys. I don't think I've ever seen a photo of Blackie though! Lovely kitty. Looks just like my two kitties. Blackie, Pink and Green. We're really good at names, aren't we?? *g