The things I remember sometimes!

This is another in a series of Hall of Shame posts, and regular readers of this blog will remember my other crazy stories. But this is a story that's not really about anything shameful that I did, well, other than to permit my two very young sons to watch a rather dark little Disney movie.
But let me begin. 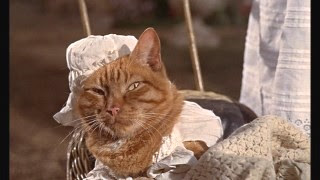 When my sons were very small, aged 3 and 5, we lived on a huge Dutch Warmblood farm in southern Chester County. My husband was the broodmare manager and it was the biggest and most prestigious farm we'd been on at the time. We lived in a cottage and it was quite a perfect existence, taking walks in the woods with the boys, visiting a little waterfall, having their friends over for visits. Oh, and there was a cat in the barn who had just had kittens. I remember that the farm wanted us to catch the momma cat so we could take it to get fixed, so we were looking for homes for her 3 kittens.
We ended up taking a sweet, beautiful long-haired kitten. We took her home that evening and ended up having friends over for dinner the following night. We had dinner and settled down in the living room to play with their new baby and talk. We were also planning on watching a Disney movie that I'd rented that afternoon. During the short amount of time that we had the new kitten in our lives, it had taken to sitting in a chair we called the Cuddle Chair. It was a big recliner, big enough for me to sit in with 2 little boys at either side, hence the name. This is where the visiting dad was sitting after dinner that evening when he got up to get something to drink from the kitchen. As he rose from the chair, he noticed what looked like a little fluff of fur next to the arm of the chair and was shocked to find that the kitten had been snuggled up in the little space between the cushion and the arm of the chair.
This person was further horrified to find that the kitten had suffocated, and that he had been the cause of her demise. He was beside himself at what he had done, inadvertent as it was. I played it down because, after all, I told him, it was just a kitten, please don't be upset and anyone could have done it. How could he have seen her sitting there? I hadn't even seen her! She was practically the same color as the chair. He felt awful and could not shake it and the family ended up leaving early. I really did feel badly for them. 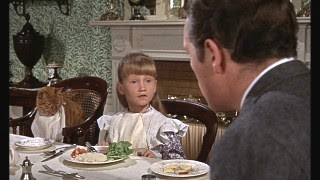 As an aside to this story, this family gave us another kitten who we ended up loving and having for years. But let's get back to that fateful evening, before I begin to digress all over the place. I downplayed the kitten's death and told my boys that it was a simple mistake. If I recall properly, there were no tears, only surprise. Before the family left, I had taken the kitten out of the room and put her in the laundry basket, covered with a soft towel. I intended to give her a proper burial the following day, and the boys were all for that. 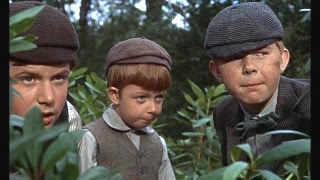 The movie I had rented for the evening was "The Three Lives of Thomasina" which, given the current circumstances, seemed like a good choice in retrospect. The boys ended up loving the movie, as did I. It had a popular cat about town that everyone loved, a grumpy dad who was a vet, a beautiful witch, and it was very British and had a happy ending. We all went to bed content and nobody seemed at all upset with the events that had occurred earlier.
Imagine my surprise the next morning when I came downstairs to find my young boys not only already up, but both of them sitting in the cuddle chair and on their laps was (you saw this coming, didn' t you?) THE DEAD KITTEN. They were both stroking it, and it was stiff as a board and my eldest said to me, "We thought that maybe this kitten would come back from the dead like Thomasina did, mommy." My little one was gently rubbing its ear. I didn't make a big fuss about what they'd done. I remember kneeling down and petting it and telling them that it doesn't work that way. Only in the movies do things like this happen. This kitten was dead and we were going to bury it this morning, and I gently removed the dead animal from their laps. And a burial is what we ended up doing right away. My husband, however, loved telling this story at work or to anyone who would listen. It was quite the laughing matter among his co-workers on the farm.
It's just one of those things that happen and I don't know what made me think of it this morning while I was driving to work. Sometimes I remember the oddest things . . .
UPDATE: Rich at work tells me he had to read this twice. He can't believe I posted it. I need to tell you that the guy who sat in the chair was a skinny young guy. The kitten was very small and was apparently sleeping between the arm of the chair and the cushion; there was a little space there. It did not struggle, or he didn't feel it. It's a sad story, and I apologize. But it's a weird story, too, and you know I'm weird, right? I was totally freaked when I got up and found the dead kitten on my sons' laps! But I didn't want them to know, so I played it cool and gently took it away from them. It's all everyone on the farm talked about for weeks, because it was sort of crazy.
(photos courtesy Disney studios)

The wonderful memories of childhood. This was a lovely story...and "The Three Live of Thomasina", one of my very favorite movies. Remember song "Tom-a-sin-ah, where are you going now..." (or sumpin like that - we're going back a loooooong way!

Thanks for the laugh and the memory!

Aww, I know what it's like to watch your kids experience an animals death. Thanks for sharing your "fun" memory! Love it.
*hugs*
Shimmy

Oh, that's quite a story! And the coincidence of the unfortunate event and your movie choice happening on the same evening! Uncanny......or meant to be.

You know......I thought I'd seen most Disney movies, but Thomasina is one I've never had the pleasure of watching.

Wow, kind of sad, strange and well...quite a story. I can just see the boys' little minds with cuddling that dead kitten back to life.

Well darn.. I wanted a Disney ending to the story. A magical "it wasn't dead after all". Sad, yet amusing story, Kate. That darned cat!

What a sad and wonderful story, Kate. I'm so sorry for the kitten and for your boys, but it was nice of the other family to give you a "replacement" kitten.

If only we could stroke those we love back to life, eh?

Well, except for Annie's singing, this has been a heartfelt story. I have a complete picture of them with the kitten. By the way, I have a little something for you today...

That is so sad and I really feel bad for that poor man. But that was so sweet about the boys trying to make the kitty come back alive. Hope you day is good.

...Aww Kate, this is a purrfect story! So sad for the lil' kitten's passing but what a wonderful story none the less... :o)

Kate I love your blog! I got here through Pioneer Woman. I am an equestrian myself and your blog really takes me home... :o) Thanks for the beautiful pictures!
Em

Katie-did you are such a wackado. You make me laugh, you make me cry.
I miss you! ;)

Kits and Kids - you just never know, do you?

I think it is a great story - don't we all have these little wierdnesses from our childhoods and from when our kids were growing up? No shortage of that around here. And I think you handled the next morning beautifully - what a blessing to have a mom who can hold it together, even when her kids have totally freaked her out!

I feel sorry for the guy who smothered the cat, I'm sure he was a wreck...but I would crack up too if my boys did the same thing...but I would probably scream if I saw them with the cat.