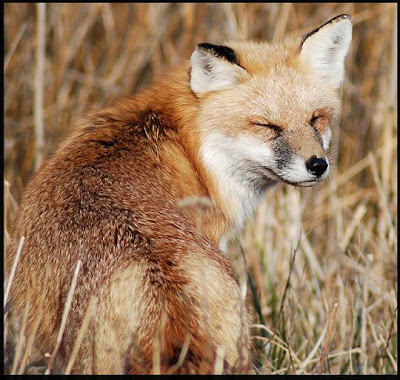 No, it wasn't this fox that I saw today. I searched flickr for quite some time just now for a fox picture to use, but they were all copyrighted. I took this picture last winter and used it in this post when I first began this blog, and I'm just going to use it again. Today, George and I went for the first of our two daily bike rides. I've grown tired of picking ticks off myself and the dog after walking through the woods, so I've curtailed them for now. Besides, I've had Lyme's before and I don't need it coming around again. I've been sticking to the open paths around the paddocks, and riding my bike down the farm roads while George jogs beside me. That's what we were doing, George and I, when I spotted what looked almost like a cat, but it was trotting like a dog. When I got closer on my bike, I saw that it was a very young fox all by itself. He was jogging down the edge of the road and the breeze was coming towards us, so he had no idea we were there. George was still behind me some distance, sniffing at one of the telephone poles. I got to within about 10 feet of the little fella until George came up next to me and the fox heard me telling George to heel. It turned around and looked at me but kept on its little jog, oblivious to the dog. But George wasn't' having any heel today, so he took off at a trot and chased the little guy until it went under the fence. Then it came out again and they had a bit of a chase around some bushes at the edge of the woods. I called George off and he came to me and we stopped to look at the little guy. He'd come from under the fenceline and was sitting on the grass betwen the fence and the woods just watching us. I remembered that last week, I'd seen a dead fox along the road. Perhaps that dead fox was the little one's mother? He did look a little scruffy. I rode on, remembering an incident that happened years ago when my boys were small and we lived on a huge breeding farm in southeastern PA. I walked all over that farm and thought I'd never again live on such a wonderful place. One day, I came up a small incline, the top of which sat a beautiful specimen of a fox. It was just sitting there and cocking its head, watching something below. I came up right behind it, almost close enough to touch it! The breeze was in my favor and it had no idea I was there. Then in a flash, it noticed me and ran away, stopping to look back at me. When I looked down on what the fox had been gazing upon, it was the farm workers turning out the horses in the morning. The fox was just watching the routine and the hustle and bustle of a horse farm waking up and getting to work. 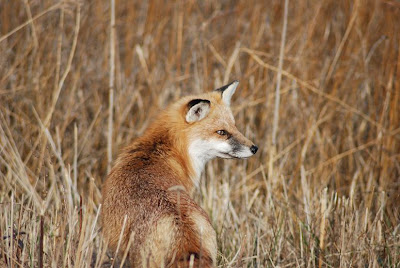 Another time, on the same farm, and probably with the same fox, I had an even better sighting. Back then I was young and loved to run and bike. My knees can't do the running anymore, but I remember jogging along the edge of the woods. And the next part is true because it's hard to believe. I was in my zone, just jogging and noticed something off to the left. Glancing next to me, I was startled to see a fox jogging not 10 feet away from me. A beautiful, red fox with black stockings running next to me! It glanced over and I looked back as we continued to run parallel to each other. After about a minute, it tired of the game and took off to its left and ran across the field. Now that was exciting! Maybe you don't think so, but to me, being that close to such a beautiful creature left me breathless and smiling! I couldn't wait to tell my husband when I got back home.

what a great post! they really are beautiful animals. i would be totally stoked if i looked over and saw one running next to me. that's a rare moment you'll never forget!

That would be a beautiful experience.

What an amazing story. I would be excited to see them that close. I can't believe it jogged with you- how cool!

I love foxes we have a gray fox that comes through rather late at night... unfortunately with the advent of the subdivision across the road alot of our wild life has left... and the only critters we see much are road kill :( I did have an armidillo come to my yard late one night and we have seen a doe reciently (I hope shes had her babies in the woods behind us) and we had a black snake come through the other day... how cool to have a fox run with you!

That is an amazing story. They are so beautiful.

...Love the fox photos and stories! Foxes are such a beautiful animal... I feel the same way you do when I'm in the presence of such a creature. I once had an owl fly ahead of me in the light of my headlights while driving on my way to work early one morning. It was the most awesome thing I'd had ever seen! It was just within 10 ft. of the hood of my car and it was as if it was enjoying being in the light for a brief time...

...Thanks for the pretty photos and the stories! You rock!

...Btw, I love the header and did you do something different with your blog? Different colors or somethin'? Anyway, love it!

Top 'o the morning to you, Kate! Beautiful post and amazing photos! I am constantly amazed by nature. About a year ago, Doughboy and I were a mile from home when we saw a fox and her two kits emerge from a drainage culvert. She had apparently made a den in the culvert, which is OK by Georgia standards since we're in a drought. And there I was without my camera! They were sitting along the road side watching cars zip by and all I could think about was road kill. I begged Doughboy to stop. I figured that I could walk toward them and force them to return to the security of their den. Either that or the mom would charge at me. Anyway, my idea worked and the mom and her kits quickly scampered into their den. They were so graceful and lovely!

Being in a new subdivision, I open my back door in the early morning and see deer grazing in the field next to us. I wonder how long they'll stick around until new homes and people crowd them out. Thanks much for the stories, Kate!!

What a great story, Kate! Foxes are so elusive (around here, at least) that a sighting like yours is a rare and wonderful thing! I love your photos, too. :)
xoxo,
Mary

Wow Kate, that's just amazing. What a lovely series of encounters. That jogging fox must have sensed a kindred spirit in you. Beautiful photos too!

That would be really amazing to jog with a fox! Love the photos, even if they are repeats. We have a lot of foxes here, but so far I haven't gotten close enough for a good shot. And I stand in awe that a 1 year old dog can be called off a wild animal - good boy, George!

How awesome, they are so hard to find and see...let alone try to get a pic. I can see why you didn't!

Working Mom, Jen, Shimmy, LauraPeach, Lauren, tj, Debra, Mary, Hilary, Dlyn, Cathy . . .
I am so glad that you enjoyed the fox stories. It is really special when nature comes that close and I'm so glad you understand and liked this post!
Also to Treasia, thanks for the e-card!
And to Lori G, it's ok that you call me to tell me how much you like the blog. I know sometimes it's hard to leave comments. I needed to hear it this morning, so thank you all.

I'm just stopping by to say hello. And...a horse farm! Heaven! I love foxes, they are so cute. I've only seen one up close, that would be so cool to be jogging with one!

Wow! A real life adventure. Our dog would not have stopped and we wouldn't have been able to call her off. But if the fox moved towards her she would come running back.
Thanks for sharing both stories.

What a rare experience you were able to share! You should feel very privileged!

"You got chickens" he! he!
I love foxes, you are so lucky to see them in real life! Can I call you "Runs with Foxes" LOL!!We had a little fox outside our office one day. I just so happened to HAVE my camera! I took several photos of the little fella, looked like he could've used a meal!

What a great story. We have fox around here but they are pretty elusive so we don't often see them. In fact the last time I saw one was at the Oregon Coast running up the middle of the highway which we thought was very strange. My sister used to have a family of fox living behind her house so I got to see some cute babies one year. But development took over so the field behind their house is now filled with houses.