The future is so uncertain 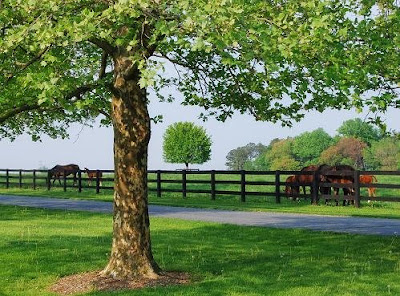 I know that some of you have noticed that I haven't quite been myself lately. Well, my husband lost his job on the horse farm and it's been weighing heavily on the both of us. As I edit this post, things are ok. Really. But this is what has happened. We've been living on this horse farm for ten years, and my husband and a co-worker who had been here 14 years were both given termination papers on June 27, along with a sad story involving the Thoroughbred racing industry in this state in general. You know, up until this point, neither of us had ever, EVER been terminated from a job. And even though they said it didn't reflect at all on performance and wasn't personal, it really is. And so we were faced with having to start all over somewhere else, which I've decided to look at as an adventure. But in this case, it just seems pretty scary. It's working on my nerves something fierce. There was unemployment insurance to file for, a job to be found that has housing available and where the job will be, when the whole state is suffering in the Thoroughbred racing industry. The following morning found us in the basement, going through all our old things and getting rid of as much as we could part with. We cleaned the basement too, because it was hot outside but cool in the house and especially cool in the basement. Sunday found me in front of the internet, contemplating signing on with Equimax, a search site for equine employment. I also signed on a free service called Equistaff. I made some iced green tea with ginger and lemon because it's a happy drink. And as I sat there, I watched my husband make lists of things to do, and realized how sad he was and that I would give anything for him to be happy and feel productive. There's more to this story that I can't reveal because it involves his health, and it's personal. I've said before in this blog that he's lucky to be alive. Today he doesn't feel so lucky, though. When I tell him that I honestly think that the whole thing is a blessing in disguise, he dismisses me. I glanced onto my laptop screen just now which is dark because I'm using the big 22" Dell flatscreen that my husband gave me as a gift last month. In the dark screen, I see a woman who is much older than me, who looks troubled. I realize that it's me! I'm surprised at how much older I look when I'm not smiling! I chuckle and tell myself that at least my skin is still soft and nice. So there, laptop screen with the sad woman inside. Take that! My husband has gone to Lowe's for garden string and boxes. Let's not even get started on the garden. Oh, my. I pray, too. There's a road I ride the bike on, and it's right down the farm lane. It's lined with sycamore trees, 60 of them on either side. Underneath is a smooth road, and it feels safe there. It's right where I saw the fox the other evening. It's beautiful, it's serene, and it soothes my soul. And when you get to the end of the road, you can see the river that leads into the Chesapeake Bay. This is where I pray while I ride my bike with George trotting at my side. I realize how much I'll miss this road when we leave. I remember a time when we were preparing to move from the first horse farm we'd ever been living upon. I was in my early 20's and it was in Chester County, PA and as I took one of my last walks there with my border collie, Alex, I cried and thought to myself that we'd never find a place as beautiful as this. I was very young and thankfully, I was very wrong. Because every place we've ever lived since that time has been even more beautiful than the last. And hopefully, this time, our luck will hold. I have to believe that. To be continued . . .

Many hugs to you, Kate. I wish I had some encouraging words but you are much better at that then me. SO, I offer you thoughts and prayers.

You have the right attitude and there will be another road to ride your bike on when you find your new home. A road filled with many a new grand adventure awaits.

Kate,
Lots of thoughts and prayers for you here today. You have a wonderful attitude, but I totally understand how difficult it all must be. Stay strong, try to smile -- I'm sure you will find beauty wherever you go.
xoxo,
Mary

My heart goes out to you Kate, as do my prayers. I pray that you will find increasing beauty at the next stop on your journey.

My husband is a union/commerical carpenter, so jobs ending are a way of life for us - it never seems to happen at a good time. We at least get to stay in one place.

*HUGS* You guys are in our thoughts and prayers!

I have little doubt that you'll find something wonderful around the next corner. You see beauty all around you and it's clear to me that you have "half full" glasses at your disposal. Had I seen my reflection in the lap top, I'd have cringed. You shot back at it with an "oh yeah?" Something will work out. Count on it.

And it will be beuatiful. Something will come up and an opportunity will rise. I'm thinking of you today!

Hi Kate... I am one of your silent readers...
Change is so hard, especially with all the obstacles you mentioned!! We are so lucky to live in a country with beautiful places in every single state..every single county... it's just having the eyes to see it...and welcome it and seek it.
Wish I could ease your heart as well as your husbands...
I'm pulling for the both of you!

Oh Kate, may goodness find the two of you always. You're in my thoughts and prayers. And I know it will be ok. Just KNOW it!

...Please keep your chin up and for future reference, smile at the woman in the laptop screen...you never now, she may even smile back! ;o)

...a lil' quote for you:
“One day at a time--this is enough. Do not look back and grieve over the past for it is gone; and do not be troubled about the future, for it has not yet come. Live in the present, and make it so beautiful it will be worth remembering.”

I truly wish you and your husband all the best!

My heart is sad for you and your husband. You both are in my prayers and if there is one big lesson I learned when I lost my daughter is that EACH day is a treasure and security is all an illusion anyway. The only thing you take with you when you go is love. Love from your family, friends and even those who don't personally know you. Know that we are all pulling for you to find something quick. Hugs!

I wish I lived close enough to give you a hug. Those are so hard to give over the internet. I'm glad that you're able to stay positive, it amazes me how often things seem bleak, yet then turn out for the better.
I hope that your hubby feels better soon. You are in my prayers and I will ask the Lord to give both of you extra strength right now!

It's easy to say from the outside that everything will be alright...but it will. Life is full of downs and ups. You're on your way up now. Enjoy the ride!

Only thinking of you both. You are right, it will be okay.

My heart is breaking for you, for the pain you feel. It sounds trite to say everything will be okay, but it will.

It may get worse before it gets better, but it will get better. I promise.

There is not a lot we can do except give you moral support and we're always here to listen.

I know things are going to turn around for you. You have very positive "vibes" and that will stand you in good stead in the future.

All we can do is pray for you.
I know how hard it is to lleave a place after being there a long time.

My heart goes out to you & your husband. And I'd like to repeat what "andi(RrlScrapGal)" said~ it's beautiful and true......."EACH day is a treasure and security is all an illusion anyway"..... I wish you the best of luck..and will 'scour' some for you too. (Anything in TB industry?) It truly is beautiful where you are..you've taken awesome pix, so you can have them close to your heart always.

Kate, I'll continue to hold your family in my heart. I know that a blessing will come out of this. It's how God works. I know that you have enough faith for both of you, so hang in there.

Oh dear! Even though I know the happy ending, I still read this with tears in my eyes. And during this time of trial, you were checking in on me. I can't tell you what a special person you are.