It's going to be ok 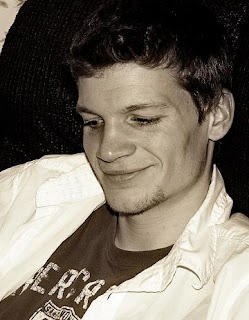 Circumstances in my life attempt to overwhelm me sometimes, but I just try to roll with it. Three days ago, my youngest son texted me while I was at work, telling me that his arm and his chest really hurt and he'd taken an aspirin. I called our doctor to try to get him in and there weren't any appointments until the following afternoon. Since it was his left arm that was hurting and his chest, I thought it best to take him to the emergency room.
After many tests, we were told that they suspected that he had Myopericarditis, which is an inflammation of the muscular wall of the heart. He'd had a fever and sore throat earlier in the week and they think the virus had travelled to his heart. He was seen by three different cardiologists and they've all said the same thing. He'd been in the ICU at the hospital ever since and he came home Saturday afternoon. He's 21.
I was really scared, but don't tell him that. It's odd that I posted about the kitten the other day because we were talking about it in the hospital and he remembered it, even though he was only 3 at the time. He remembered it dying and me not being upset about it, so he wasn't upset either. He also remembered watching Thomasina that night and going with his brother to get the dead kitten out of the laundry basket in the morning, hoping that it would come back to life like Thomasina did.
And when they told us at the hospital what the prognosis was, I just tried to remain cool. The virus will run its course and he's on an anti-inflammatory. Down the road, we'll be able to see whether or not there was damage to the heart. Everything seems fine now, though. I know now that he'll be ok. Just don't tell him how worried I really was, ok?
Tonight we're watching the latest Harry Potter movie together. I'll letcha know how it turns out.

Oh sweetie, I will pray for him! When it rains it pours huh? Just when we thought you were getting rid of a stress.
Hope you enjoy Harry Potter.
*hugs*
Shimmy

Thanks, Shimmy. I asked him at dinner if he minded me posting about the past 3 days and he said he didn't.

He's the one that got me into Harry Potter, so I'm sure I'll enjoy the movie!

Hang in there friend. Gonna say a special prayer for you all tonight. This rain cloud, it needs to go away.

a prayer said for your son...some times it is so tough being the grown-up Mom...hugs...

Wow, Kate, you're sure having a run of it, aren't you? That is SO scary though!! Hang in there. Take deep breaths. It's going to ease up on you soon. Go hug your son, your dh, and George. I'll keep good thoughts headed your way.

You and your son are in my thoughts and prayers.

The responsibility of motherhood doesn't change even though our babies are grown. I never stop worrying about my daughter. She's 31 with 3 children of her own. My thoughts and prayers are with you and your son, Kate. Hang in there!

Oh my goodness, Kate, you have had more than your share of stress this summer! I'm glad to hear he is home from the hospital, and you are both in my thoughts and prayers. :) Hope you enjoy the movie. My daughter is a great Harry Potter fan, and we have all read the books and watched the movies.
xoxo,
Mary

Adding my well-wishes too ... sending healing thoughts and virtual hugs. You're having quite the summer! {{{hugs to you and your family}}}

The only thing you are fully, wholly and always guaranteed when you become a mama is you will worry every damn day for the rest of your life.
I'm with you, Kate, and am praying for the good outcome. Sheesh! Enough is enough already!!!

Believe me I know the rock in the pit of the stomach feeling when something like this happens. There were days when I wondered if we would ever be "normal" again. I offer you my heartfelt prayers and hugs. It will be fine....positive thoughts.

Haven't checked my mail until now and just wanted to thank all of you for your thoughts and well wishes. I never wanted this to be a place to post all about my problems, so sorry for that.

Vonda, I'm so sorry to bring up memories about that pit in the stomach feeling. See, it's a new kind of normal now, isn't it? Thanks so much, all.

Sending best thoughts your and your son's way, Kate. It doesn't get any easier when they become adults, does it?

P.S. Your blog is real. Meaning you reach readers by your genuine writing that comes from the heart. No need for apologies. I LOVE your stories!

Did anyone ever tell your son that he looks very much like Ashton Kutcher? The resemblance in this photo is uncanny.

Oh my heavens. Just checking in...I am sending nothing but positive light to you all. What a summer you have had...

Oh I hope he gets better soon! How scary, I am glad he called and told you he didn't feel well! You have the strengh it will take to help him get better! I will keep you and your son in my thoughts and prayers.

Ha! Ashton Kutcher? Maybe a little bit, in this photo anyway. He is a handsome little twerp.

Heart things are always serious.....he's in my prayers!

you and your son are in my prayers, country girl. Beautiful photography!!

Oh Kate,
I will pray.