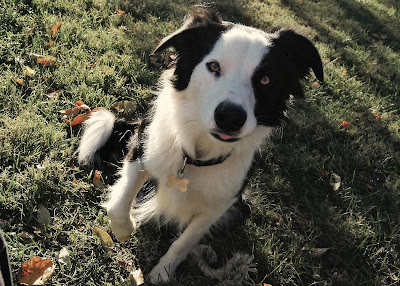 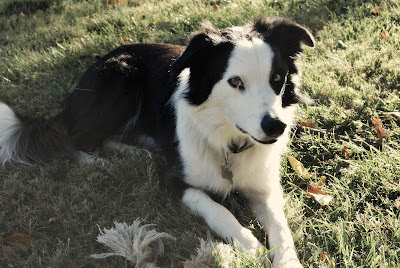 I promise to be good.
My husband and I were out sitting in the late afternoon sunshine today. My husband was resting in the warm sun and I was reading a book that came today from Daryl (she sponsors a bookswapping site). Thanks so much, Daryl! The book is Twilight and I'm already totally engrossed in it.
As we were sitting there, tossing a rope toy back and forth for George, we remarked that even though he's only a little over a year old, he's already lived in three different places. We were hoping that he was handling everything ok. When we lived at the farm prior to here, he was told not to come up to the barn every day with my husband becaused he got all the other dogs going.
However, it was the other way around. There were a couple of dogs, one in particular, that was very aggressive and would get George going by trying to attack him.
So George had to stay in the house all morning and then all afternoon.
Well, he doesn't have to do that anymore!
George had always gone to work with my husband. When they were checking broodmares, he would wait in the truck. He's a pretty good dog. When the stallions or other horses would run the fenceline, he would calm them down somehow by sitting there and staring at them until they stopped.
I wonder sometimes if he misses the horses. But he's got plenty of squirrels around here to keep him busy. In fact, the squirrels remind me of something the nuns used to say to me (only sometimes). Kathleen (they would say), you are a Bold, Brazen Article!
And that's what these squirrels are, too!!
Have a great Saturday, all.
Until tomorrow, my friends . . .

Can George please come for a playdate? with Dora?

And may I please bring a casserole?

Aww, hooray for George on being able to run around freely!

Nothing better than a good dog, and good dogs we both have. Isn't it just wonderful?

That George is such a heartbreaker! Handsome boy! Tell him squirrels are the bane of Edward's existence! He can certainly relate.

George has charisma. He has IT, I tell ya.

He needs a calendar.

Oh my. I didn't know YOU were the original bold, brazen article. Ha ha ha. Did those nuns know that these days that kind of behavior is what we all aim for?

That doggie has such a sweet face. One of these days I'll have more land and be able to share my life with a dog too. What a nice way to spend the last day of October.

Just got caught up - Josie's spending the night and has already gone to bed. But I've been so busy all week that I haven't had much time to visit anyone.

Congrats to the winner of the wallpaper contest! Good job!

Apple crisp sounds yummy! Did you get ANY???

Ah, to have someone make me fresh coffee in the morning! old Melitta pot or no...I remember those! My mother-in-law laughed at me when I took ours up to the cabin every summer rather than use her old percolator. She thought I was a spoiled city girl. Hah!

Take care of you both. Hugs.

...Love the second photo of George! That face! You know, no matter where you go I'm sure that George is just happy to be with you and it doesn't matter where you live. Dogs are simple like that... :o)

...Enjoy your weekend you two!

Thanks for you comment over on my blog. I'm glad you enjoyed the music. If you ever compile a "winter" playlist for yourself I'd love if you would post it back in the comment section.

Your dog George is beautiful. My wife and I have two labs, both just over a year old. We have a black lab named Samson and a yellow lab named Ben. Samson is our baby, we got him when he was 7 weeks old, and Ben we adopted about 5 months ago now. Unfortunately though we are looking for a new home for Ben, somewhere with plenty of land (we live in a small condo) or someone that is looking to train a hunting dog.

Well I could go on and on about them. Hope you have a great weekend.

Those photos of George are GREAT! I'm so happy he is able to run freely around your new place and enjoy all of those squirrels....he will have them all whipped into shape in no time.....=)

Enjoy that book...my daughter just finished reading it and she loved it....so much so that she had to buy the next book while in town yesterday.

Have a wonderful, peaceful weekend.....

In less than two weeks I have plowed through all four books in the Twilight saga. Only 15 minutes ago I finished Breaking Dawn - the last book in the series - and I am feeling a sense of loss that there is no more. I savored the last 25 pages as if it were my last meal. This saga sucked me in completely. I cannot wait until the movie release Nov. 21st. Enjoy, Kate!

George, is dah-ling! I wish you lived here in Texas for my Trooper to have play days with George.

With both of them being black and white, we could capture some great photos.

I really enjoy your site.

That dog has such intelligent eyes. What a beauty. And "bold, brazen article" cracked me up.

Awww, that face!!! He is such a sweetie. :) Hope he is having fun with the squirrels.
xoxo,
Mary

I think that saying fits squirrels very well. However, knowing what I do of you, I can see why the nuns said it too. You are a Bold, Brazen, Article and its ALL GOOD!
I love ya,

George, what a calm and patient squirrel chaser. Good boy.

So glad you are enjoying it and its helping to distract you a bit.