The other day, my friend Daryl ran a pay it forward contest and I was one of three lucky winners. I received this in the mail today: 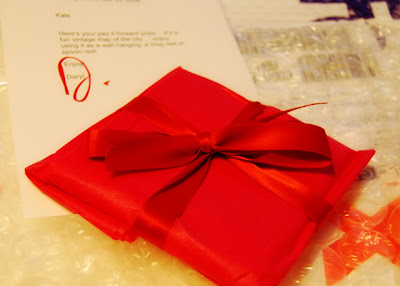 It's a ceramic tile, a fun vintage map of New York City. I also got a really cool New York keychain with my name on it. WOW! Thanks, Daryl. 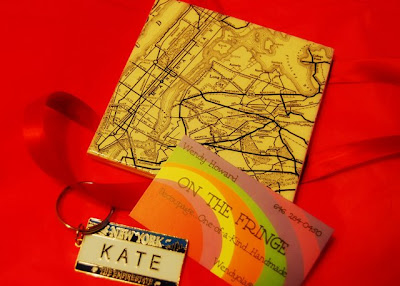 And now it's my turn to pay it forward. The first THREE people to leave a comment on this post will receive something from me. I haven't quite figured it out yet, but I have a pretty good idea what it might be.


And now I have a question for you. It's silly, but I'm in a silly mood tonight.


I have a friend who seems to have a funny fetish for a certain nanny with secret powers and a magic umbrella. Ok, maybe it's not a fetish per se; we were just talking today about librarians and cute glasses and OH, NEVER MIND!! I promised I would not reveal who this person is. I'm sure he would be extremely embarassed. It's NOT my husband, though.


Anyway, this person thinks that (dare I say this) that Mary Poppins is a hottie. Especially when she's singing "Just a Spoon Full of Sugar" or she's floating around on that magic umbrella of hers, or being especially emphatic with Mr. Banks. Let's just say my friend is a fervent admirer of the Poppins. (I've added these links directly to the dictionary just in case he's reading this post and needs a little help from Mr. Webster).

Who doesn't think the Mary Poppins in a hottie?!? :) She's magnificent. I want to have a magic carpet bag and magic sidewalk chalk when I grow up...

Congrats on the neat prizes, love those!!

I never thought of her that way. Might be a right brain, left brain kinda thing? Go figure! Anyhow, she was magical and could do lots of stuff and float down with the broom and all. Something that I would totally LOVE to do, but alas. I DO think it's funny like you do and especially cause Mary is from many years ago when we were kids!! There's a lot of newer hotties around who don't cover themselves completely in long coats and dresses. Who can ever understand the way the male brain works? Why try!
Seestah

Darn, I'm fourth! I got distracted by the election and someone beat me to posting! I love Mary Poppins!!

I'm supposedly ;) doing this, and I'm glad you are! Cannot wait to see your prizes! xoxo, L.

Me, not so much on the Poppins. I just asked my husband to check on a male's perspective and after a very long moment he exhaled a very loud, "NOooo!" Sorry, not over here.

And thanks again for sending readers my way. I've yet to pay my thanks to them but I will soon.
erin

Glued to the election tube here... gah. Mary P a hottie? I'm not seeing it, but what do I know? It is VERY funny though.

Actually, Kelly, you're 3rd!! My sister was 3rd and she doesn't have a blog. So she won't be able to pay it forward. I've sent you an e-mail.

And I am not so much on the Poppins hotness either. Diff'rent strokes, I guess.

Oh my goodness!! Thank you so much!! I will have to think of a way to "pay it forward" too! Your blog is fabulous and you also make it so much fun! Your heart and soul are priceless and you are such a delight!! Thank you for being YOU!!!

Cute post! I am sorry I wasn't in the top 3, but what can I say. I was at work and now caught up in the election results. Mary Poppins is more of a sweet person, not HOT. Maybe that's just me, but then again maybe it's a guy thing. Your prize is neat. That tile is very cool.

I'm very bad. Earlier tonight I was at Mental P's home for cocktail hour (imagine that!) and signed on to her computer as me, not her. So that earlier comment up there (#5) is from her (Mental P, Miss Lala, whatever) not me, TSannie. Sorry about that, but not really - love pullin' her chain! ;-)

I loved Marry Poppins - we had a knock-off version of the soundtrack and my sister and I sang all the parts together. Like 400 times a week. We were good.

Ah he probably said the same thing about Maria Von Trappe. Something about her hills are alive..

definately not a hottie!!

Of course she is. ;D

Well, Julie Andrews is my kindred spirit, so of course this guy has fabulous taste!

Well, Our librarian is like Mary Poppins and she may be a hottie?!!!It is not a librarian thing, it was said that she is cute like Mary poppins with the new glasses. Hey, Seestah and that is how the male brain works. Thank you Willow for agreeing. Kate, who was that lovely person in that rich deep chocolate corduroy car jacket who came to school on Moday morning. Could that have been YOU ????!!!!! and thanks for adding these links directly to the dictionary for those tough words, Wise guy !!!

Gulp, I dunno, it's hard to think of childhood Nanny as hottie, eh? But Mary Poppins is way cool.

I am SO glad I wrapped that nicely ...

I think its Julie Andrews and her proper British look that is the turn on .. not for me but for some men for sure ...

I think that Bert thought she was a hottie. I think she's BEAUTIFUL! So I'd bet he's not the only one. Funny way to think about it though.
*hugs*

Hmmmm! Mary Poppins a hottie? Well she might be to the right person but not so much for me. I do like her and that movie though. But a hottie? Very funny to think of her in that way.

If Mary Poppins is a hottie, then there is hope for me. Maybe I can be an international supermodel after all...
xoxo,
Mary

I don't know if she's a hottie....but I would have loved her as my Nanny.