My life in the fast lane

Last week, my husband and I took several small day trips and one of them was to Eastern Neck Wildlife Refuge, on an island off the eastern shore of the Chesapeake Bay. On the map, it's just south of Rock Hall and just northeast of Kent Island. 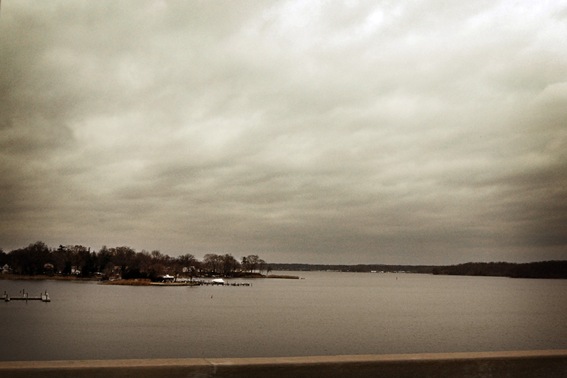 It's about an hour drive from our home and I shot some photos out the car window during our drive on this gray morning. The photo above was taken while we were driving over the Bohemia River. Hey, I know someone who lives over that way . . . 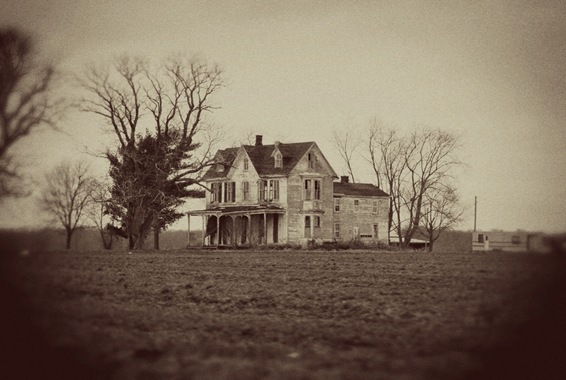 Further down the road, a deserted old farmhouse intrigues me. I ran TRA's 'Super Old Skool' action on it to make it look even creepier. 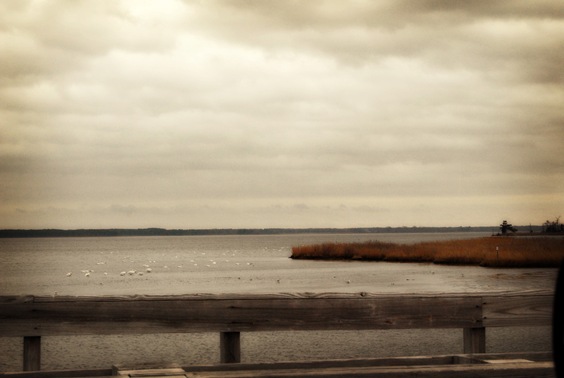 We drove through the little town of Rock Hall and continued south. This was shot going over the little bridge that connects Eastern Neck Island to the mainland. 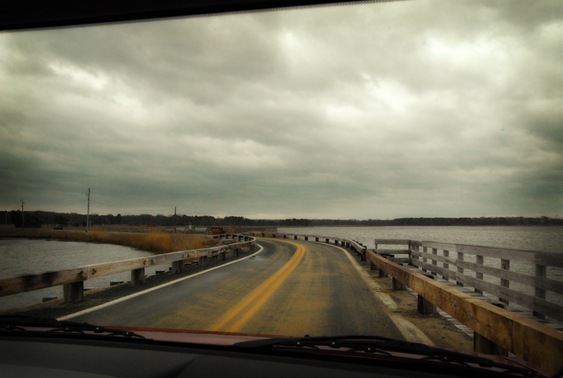 The Chesapeake Bay washes over the bridge during storms and I assume that's what's lying all over the road here. 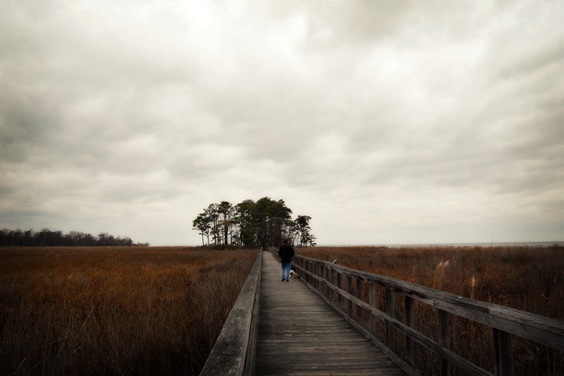 Just down the road is Tubby Cove. You're familiar with that little pit stop, right? I posted a similar picture of the Boardwalk trail (above) out to the observation deck on my Picture A Day site a few days ago. I am thinking of doing a series entitled "My Husband, From Behind".

Not really. He'd kill me! 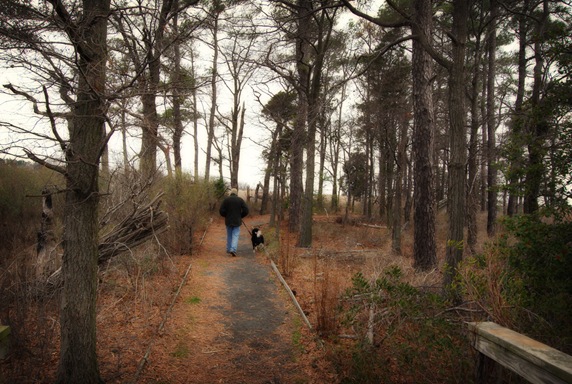 Here's another one anyway. This was taken inside that little crop of trees you see in the distance from the Boardwalk Trail which leads to the viewing platform. We didn't see much and the wind was really picking up, so we got back in the car and headed to a more sheltered spot which I'll continue tomorrow.

I mean, I know this is a thrill a minute, but I warned you not to get too excited, didn't I? I put it right in the blog header!

I think my two favs are the old house (LOVE IT) and the bridge/road washed (dirty washed) w/ the bay water.

No offence to your husband's behind...

Oh I love the old house. Great picture to paint.

I love the old house, I bet it was beautiful in its prime.

Thanks for the tour. Good to get a break from the same-ol' stuff around here.

That old house shot is wonderful. And I am still "behind" you on the series;)

I LOVE that old house!!!!! just beautiful and full of history for someone!

I would say the farm house looks daunting...and creepy!

Love the old house -- and all the other photos,as well. Tell your dear hubby that he photographs well from behind! :) That's a beautiful area; I can see why you'd want to visit, even on a gray day.

These are great moody shots. And I would visit "My husband from behind" if you ever started it - especially if George made frequent guest appearances!

I love "drive-by shooting" and do a lot of it. I'm often surprised when I get home and take a look at what I've captured. My ABC Wednesday was a drive-by shot.

They're great! That house is spooky. Very Norman Bates, LOL! I wish I had a photo editing program...looks like so much fun to alter them and try different actions!

Creepy old house...looks just like the house that was in that Tom Hanks/Paul Newman movie of which my mind is a blank as the name of it....can you say "getting old"....

You have the most glorious places to walk! I love how in your first few shots, the clouds almost have a brownish tone. Lovely.

Great pics... the deserted farmhouse. I'm torn. I don't know if I'd rather do a paranormal investigation there (because it LOOKS haunted) or if I'd want to go ass-over-teakettle and do a complete renovation! Probably just settle for gazing at it through your wonderful pictures though. :-)

The photograph of that old abandoned farm house is exquisite.

I'm glad to see hubby is feeling better! He and George seem to be good buddies. :-)

How relaxing!...sigh, all we have is snow and minus 25 degrees celsius:( Love your pics...your blog makes me feel calm; and I liked how you remembered all your animal friends names;) That shows heart.

Your pics are so great and yes I love the creepiness. It's awesome.

Your photos are just stunning.....are you using a photo manipulation program to make the color so wonderful? I really need to look into one of those because my pictures are never quite good enough :)

Thanks soooo much for the You Tube tip. I will be trying that very soon!

Maybe you could call your posts about your husband "BEHIND the Scene",then just casually post all those great behind shots! Ah, well.....he would probably still have a conniption, but ( no pun intended )he would be flattered, no ?

These shots are lovely, Kate! You and PW use the Old Skool action often. I'm going to have to break down and get it. Did you mention in a previous post where to purchase it? Did you use an action in the 2nd to last photo where your hubby is walking across the boardwalk? I like the soft tones. I especially like the photo of the old house. Your photography is never boring, Kate. Silly girl!

The one of the abandoned house got me all excited. We have all too many of those around here.

Wow. those are great pictures! I especially like the creepy farm house! When I see houses like that, I can't help but try to imagine the life that once went on there.

Amazing photos! I wish I had photoshop! :(

Kate that farm house is so neat. I am loving the behind pictures as well. Your hubby should be honored.

Oh, it looks like SUCH a beautiful spot, and your photos are just gorgeous! I love the color of the sky, and the marsh grasses -- beautiful! And didn't I tell you -- your husband is going to be the Brad Pitt of "Chronicles..."

I stayed wide awake - I loved your photos - they had an almost monochrome quality - and I am getting quite used to your husband's back view - he looks to be enjoying himself walking the dog, and that is all that matters.

Are there salt water marshes there. The reason I ask is that the smell is so distinct that when I saw that picture of the boardwalk....it came back to me. And I'm wondering if my brain matched up the sight and smell correctly.

Fabulous .. and I LOVE the effect .. very cool

And I think you are missing a great op here .. think of all you could make on a niche book entitled "the back of my man"

I am just sayin'

Hey, all. Wow. Just checked my mail and between all the comments about the house and my husband's behind, I'm simply surprised.

To all who use Photoshop, and even those of you who just come here for the excitement, I am an Action Freak. I rarely post an SOOC shot (Straight Out Of Camera).

For the house, I used only OldSkool. It's available from Totally Rad Actions and is in one of their sets.
For all the other shots, I used combinations of actions, beginning with Rusty Cage (also in the TRA set mentioned above), then Lights On (ditto above), lowering the opacity in each layer considerably. Then I finished them off with a slight edge burn (Pioneer Woman's free Action Set #1).
For one of the photos, I used PW's Soft & Faded, lowering the opacity.

For all of them, I used my cloud trick, which I guess I could post about again. It's pretty cool, and it enhances the clouds a bit.

And thank you all very much!

KathyB., I also liked your idea about the Behind the Scenes. Hilarious!!!!

Kate, I love the pic of the old farm house. Every time I see one like that it makes me want to go fix it up and live in it and love it again.
You have me wanting to see that movie now too. I'm so glad you got some quality time with your hubby and friends. Hope life keeps treating you wonderfully.
*hugs*

I love that house. You take fine photos from a vehicle.

Those pictures are amazing esp the one of the old farm house.

Love the abandoned home shot. There's a road we used to take in Del/MD when we went to see our son in NC that we got on in Del and let us out just above Richmond VA. There were more old abandoned homes in MD along that road. They were spaced a few miles apart and were big enough that they were most likely old antebellum homes. One or two have been saved and are offices now, but the majority just abandoned.
And they, too are beautiful!

Hey, how are you doing?

Your kind of excitement is what I have craved and finally have. I love it.

I love that old farmhouse! It reminds me of my grandmother's house (which is now refurbished). I have a print over my fireplace that has a similar home on it. I'm just drawn tho those lovely old houses - what stories they could tell! Wonderful post!

I love the farmhouse and can see it in my mind restored to what it once was. Family with lots of kids,dogs,cats,etc...Too bad it's gotten in that shape. It needs a little love. Your pictures are great. I just got a really good camera for myself for Christmas and can't wait to experiment with what all it does.

That house...uh, that house. You knew I'd love it, didn't you. I want to sneak in. It's killing me. I want to live there. Imagine the smell of baked biscuits coming from that kitchen!