We've been sharing the camera, my husband and I. And as he gets more comfortable with it, I'm still liking that he's found something that makes him happy. You see, there was a time when he would barely touch this camera unless it was to turn it on and take a quick picture or two. He never changed settings and he never in a million years (or so I thought) would change a lens. 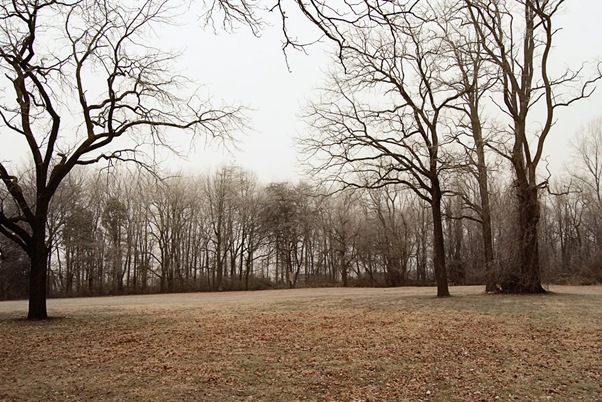 But now that he seems to be becoming a little more adept with photography in general, he's actually changing lenses. And as much as we'd both love to get a new Nikon zoom lens, we have to wait and put up with the Quantaray, which we're lucky to have, don't get me wrong. With the economy the way it is and only one of us working, it makes zero sense to spend money we don't have just because we want something that's better.

My husband took the first photo here. It was taken in the front yard early Monday morning before I was awake. It was snowing lightly and very foggy and cold. The tops of the trees in the distance are iced over. 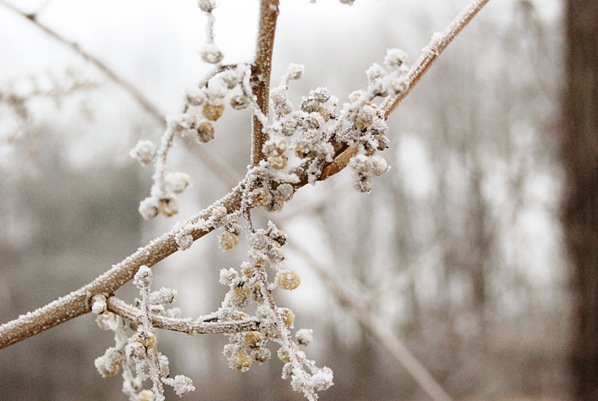 He also took this photo, without a macro lens, using the close-up setting on the auto dial. 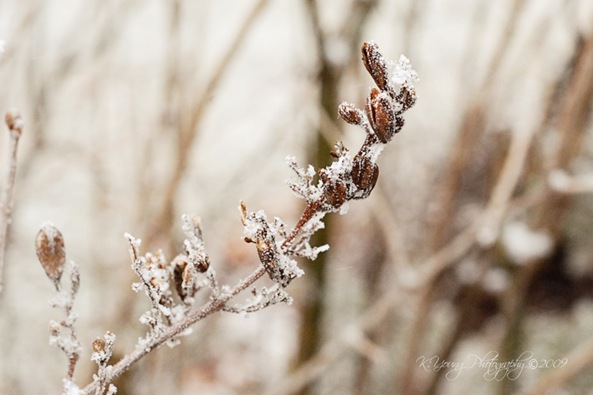 I went out later on in the day. It was still snowing lightly but a little more bright. I didn't know at the time that he had taken other photos and looking at them later, was surprised that we took some of the very same things. I took this with the macro lens. 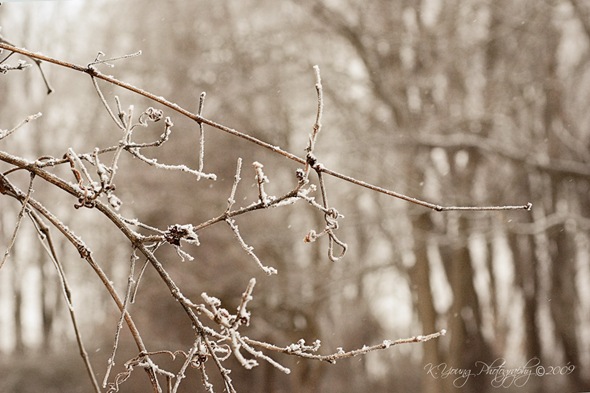 Then I took this one. Now before you get too overworked with the sheer excitement going on here, I'll explain something to you. I think we're very similar in the things that we like to photograph. And I think my favorite so far here was the one with the yellow berries on the bare branch that my husband took with the kit lens that came with the camera.

But then I saw this picture he had taken. 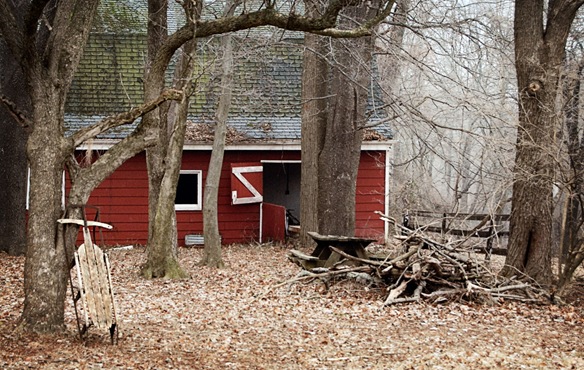 The SOOC (straight out of camera) wasn't that exciting. But so many of mine aren't either. I just liked the composition, and the red of the barn. So I ran a couple of Photoshop actions on it, cropped it some and decided to post it here. 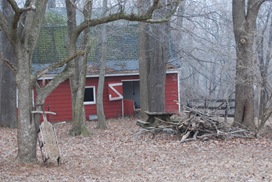 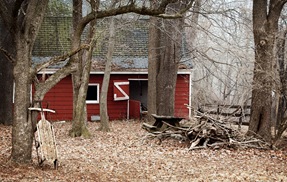 Here's what the original photo looked like. Very gray and faded. I ran Pioneer Woman's Soft & Faded action on it and then her Boost action, lowering the opacity on each of them. Her actions are free and they work with Photoshop. To clarify for those who aren't sure what an 'action' is, it's basically a series of things you would do to a photo all rolled up into one simple push of a button.

To get a little bit bigger of a picture on actions, check out this post written by PW last year. She calls it One Barn, Ten Ways. I mean, if you're into it.

And on that note, I bid you farewell on this historic day in the history of our nation.

Love your husband's pictures and what you did to the barn.Some day I would like to have photoshop.

My name is Christine said...

You do wonderful things in post production with your pics! I have edit envy=) Good job to both of you!

I love it when you provide tips, particularly on using actions. Thanks for helping this old gal!

You must be so happy that your husband it taking such an interest in photography....he's getting very good at it and I'm glad he's having fun with it...I love the barn shot he took...good composition....

Glad to hear that your husband is happy with his new found hobby. Taking photos can be so rewarding. Maybe next you should point him towards Photoshop.

is the barn on your place? the sled and table just waiting to be photod?-sp?- to cool....you both inspire me!
bv

We ALL Love Our Pretty Little Town! said...

Because of the roundness factor. People are always attracted to roundness. He chose weeds with roundness. Ergo, we find ourselves liking that one better. Like a puppy.

So when you're mad, go tell the shed. It'll talk back to you.

Love the pictures, wish I had photoshop.

Those are really lovely pictures, wintertime can be so blah, but mother nature does provide a beautiful canvas for us to photograph at this time! You and your hubby obviously have an eye for similar beautiful things! It'd be fun to mess with photoshop!

Your husband is impressive, behind the lense, not just w/ his behind in the lense! :-)

I love the photos. Love the barn, and love the macro lense shots.

The first photo is just beautiful. Maybe in another life I'll get serious about my mad camera skillz. Yours and your hunny's rock!

I especially love that barn photo.
These inspire me to get going on learning to use those actions in PS. Great job both of you.

I am definately going to have to take some lessons from both you, and PW on Photoshop seeing as I got it for my birthday! How exciting! But I know I am starting from the ground up. I love your photos and hope to one day be able to manipulate a photo the way you can!

I love the photos, he's getting good! That's wonderful for him.

I know why so many of my pics look like great composition blah blah to me and then look fairly rubbish. It's all about SOOC versus post-production. I too have edit-envy!

I tend to just point and shoot myself. Haven't had any interest in learning about different settings, let alone lenses. (I'll just admire good photography from afar) But the boost option...hooray! I do love that.

You won my giveaway, btw!

Oh this is a sore subject at the Manor. I dropped my camera and broke it last week! Waaaaaa!!! And a new one is not in the budget this month.

Your pix are WONderful!!

Gorgeous shots from your hubby and from you. And you did a great job with the barn photo.

Beautiful shots, all! Your love of nature really shines through. It's great to see winter through someone else's eyes. So often, it is a depressing season...
xoxo,
Mary

Don't you love sharing photography with your dh? I'm going to teach mine how to adjust his photos next. Maybe using iphoto, or Picassa. I'm not ready to teach him photoshop yet...

Love the macro shots! (even his auto macro one!)

The barn shot is wonderful... nothing like a big splash of red in the wintertime to brighten up a person's life!

All your photos are terrific - Love the close ups.....I'm just learning Photoshop. It's all very exciting :)

I like the SOC photo best .. its a wonderful composition so IMO it doesnt need any help ...

I love the close ups of the branches. Isn't it amazing what a little snow and/or ice can do to make them look so unique?

Love them! What is the macro button???? Help!

WOW! All of these are great!

It's inevitable, you know- eventually curiosity gets the best of them and they have to try their hand at it and see if they could do as good a job as you.
He does great, following your example, I'm sure :)

Hubby is doing a great job. I love the photo of the red barn.

I love her BOOST action! It really brought that barn to life! Nicely done.

I just love your pictures. Wow, they make me smile. Hope it is alright that I stopped by.
Debbie