I love a good movie

Visiting a fellow blogger today, I was vividly reminded how much I enjoy the movie, Amelie. It's a French film (2001) directed by Jeanne-Pierre Jeunet and stars Audrey Tautou as Amelie Poulain. Basically, it is a human comedy about love. 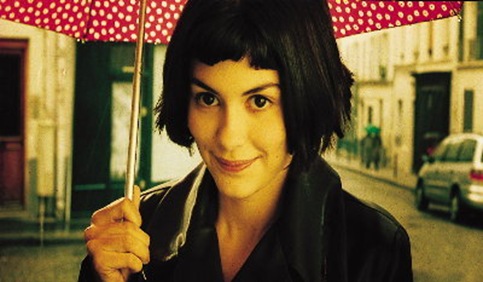 Amelie grew up lonely and isolated from other children. Her distant and taciturn father, an ex-army physician, mistakenly believed her to have a serious heart problem. Her mother died in a freak accident, which caused her father to withdraw even further into himself. Amelie is left to amuse herself and consequently develops a vivid imagination. 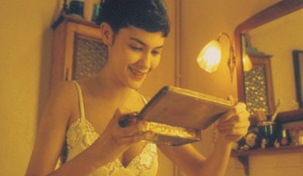 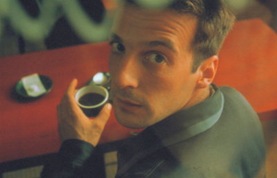 As a young woman, she happily lives alone and is employed as a waitress at a small cafe in Paris that seems to be a magnet for misfits and is owned by a former circus performer. Amelie spends her free time enjoying such simple pleasures as sticking her hands in sacks full of grain, cracking creme brulee with a teaspoon, skipping stones, and trying to guess how many couples in Paris are having an orgasm at the same time ("Fifteen", she announces).

But things get really interesting when she discovers a broken tile in her apartment wall. Behind the tiles, she finds a very old tin box full of treasures left by a little boy. She decides to try to find the person whose treasure this was, and return to him his prized possession, telling herself that if it makes him happy, she will devote her life to bringing happiness to others.

There are many wonderful characters in this film, which weaves a tale of a sweetly poignant, intricately detailed and beautifully filmed motion picture. It was nominated for five Academy Awards in 2001, won the People's Choice Award at the Toronto International Film Festival  and was selected by the New York Times as one of " The Best 1,000 Movies Ever Made".

The first clip is the movie trailer. I added the second clip because I just liked it.

I've been recommended this movie many times - I need to actually watch it.

Char,
I tried 6 times just now to leave a comment on your post. The word vertification just keeps saying "loading".
Yes, you must rent Amelie! And here is that texture I used on the umbrella photo in the post below:
http://artofdecay-stock.deviantart.com/art/Victorian-Grunge-VI-91221186

That looks like a great movie and I love that actress! I first saw her in this freaky film where she turned out to be a stalker that completely made up the relationship that we all thought she was in during the whole movie.

She was so believable.

Hey, the girl from The DaVinci Code! Wondered what other movies she was in. Hope it comes with sub titles.

I am so behind in movie trends. After watching the Oscars last night, I am reminded of your heart warming post about Slumdog Millionaire. I still haven't seen it...perhaps I can convince Doughboy to go to the movie theater this weekend. The last movie we saw was Madagascar 2 with our grandson Ayden. As I write this I am watching a movie trailer for The Soloist. It looks really good too.

Oh how I love Amelie! Such a wonderful film. i am going to rent it again!

I saw this movie too and loved it! She had such a fun loving spirit in the movie!

This is my most favorite film..i watch it once a month...the photography is excellent..I love the game of life and she plays it well, hope you like your prints Kate, please let me know if they arrived safely...

One of my all time favorite movies...we love Audrey Tautou..Just saw her in her new movie....called "Priceless", available at the Red Box..it was terrific. I have also seen "Happenstance" and one that is very similiar to Amelie is "A Very Long Engagement"...If you like Amelie you will love this one...Happy movie watching!

One I am yet to see, but have had recomended on many occasions! And after those trailers I think you've got me hooked...

OK now I have to go rent this again. I rented it once and then fell asleep before I could finish watching it. I am terrible about staying awake during a movie.

I loved Amelie too!

I havent seen this ... but it looks like my kinda flick ... did you watch Pushing Daisies? It was cancelled so likely you didnt .. but it was supposed to be very like Amelie so I think I will enjoy it ... loved Pushing Daisies ...

I havent seen Amelie...I should see it soon. Hope you've been doing well. I had to take a few days of a break around here because of being sick..again.

I always have good intentions of watching movies and never get around to it. This sounds like a wonderful flick. You do good reviews, Kate!

I've never seen the movie, but may have to go pick it up! Love your blog, and you photos are breath-taking! I'd love to visit your coast someday, we'll see!
blessings...

I have watched this several times...so poignant and sweet! Highly recommend.

I must see this film!! Thank you for sharing!!

That movie looks like exactly my kinda thing. Wonder if I can find it around here? Not much to choose from.

I've never seen this movie but now I definately have it on my must see list!! After you reviewed the book 'Water for elephants' I read it and loved it.

Must go look this up on Netflix and add to my list.

I'm so glad you loved this movie! I both love and hate it. I love it because it's such a sweet film and hate it because the day after I saw it all hell broke loose. I saw the movie on Sept. 10, 2001 and my world broke the next day.

I love this movie too! Thanks for reminding me of it. I think I'll pop in the DVD tonight.

I LOVE this movie. My husband and I watched this movie for the first time a few weeks ago. Reminds me to watch more foreign films...they always give me a nice break from US films.

oh I just love her movies. I can watch them over and over.