It is after dinner as I write this and I am full and I am happy. I donned my old green checked apron tonight and made the most deliciously simple meal.

And afterwards, my husband cleaned the whole kitchen and put everything away. I think he fell in love with me again after this dish. 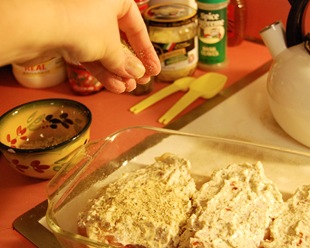 The dish I had tonight is called Parmesan Crusted Chicken. I found it on Pioneer Woman's cooking tab but it actually came from one of my favorite blogs: Kayotic Kitchen. You remember me talking about the Dutch girl, don't you? She's the one who seasons her ground beef with nutmeg. This chicken dish was absolutely succulent but I wouldn't have it too often. I'm sure it's packed with calories because what you see spread (a little too thickly, I think) on top of each breast is a mayonnaise mixture. I'm sprinkling seasoned bread crumbs on top. But oh, my stars, was it ever good. I served it with zesty fries and some sugar snap peas.

I also wanted to address some of the questions that you've asked me in many of my posts. I try to answer them directly in the post but sometimes I forget.

In almost every picture I've seen of your husband it's taken behind him- usually . . . is it the only way you get a picture of him? Camera shy is he?

I swear, after doing this post, I decided to write an entire story entitled "From behind my husband's back". He always walks ahead of me and it's probably because he walks faster but it's also due to the fact that I'm always stopping to take pictures. And yes, he's a bit camera shy. I think it is because he's afraid he'll end up on my blog in cyberspace, or that his surgery scar will show. There are pictures of him all over the place but the most recent are in the sidebar to the right under "VIDEO: A Picture A Day". There's a bunch of him in the center of the video.

I'd love to see more of your house! Will you show us more and tell us about it?

Well, that's a problem because this is not our house. We live here as 'caretakers' of this estate, in a manor house that was originally built around 1769 with an addition that dates from 1810. It's on a big hill, and according to history, George Washington and his party were here in the summer of 1777 watching British troops make landfall down on the river's edge which is about 8 miles away. I don't think he stayed in the house from what I've read, but I'm sure he must have come inside.

I don't want to say too much about something that is not mine. And I'd like to respect the owners' privacy. From time to time, I've showed some views of the property. This is what it looked like when I first saw it, before we moved here. These photos were taken right after we moved in. My husband had just had surgery and it was late October. I also took a couple of pictures from inside the house, like here and here. Oh, and here as well. There are many things in this home that don't belong to me and I won't photograph things that are not mine.

Did you know that you swallow at least five spiders in your lifetime- while you are sleeping?

No. I didn't know that. And now that I do, I'm afraid to fall asleep for obvious reasons. It's not that I don't like spiders. I love daddy-long-legs and that, in fact, was my nickname when I was in elementary school and on the track team. I could run like the wind. And I thought I'd be able to run like that forever . . . which just made me remember something my youngest son said when he was about two or three. Someone had said that they laughed so hard it made them pee. And he looked up, sweet as can be, and he said, "my mom pees when she runs." I was mortified. And I have digressed so far off the spider eating, but I feel better now that I've purged that information.

Hope this has answered some of your questions. Thanks for visiting.

Ha! I've learned something about you I never thought possible ;) Peeing at odd times is something that happens with age. Not that I would know, of course. Nope that never happened to me :) That's my story and I'm sticking to it!

I saw that recipe on pw, i'm glad you tried it...i was wondering how it was! I'll have to put that on the menu this week!!

That recipe looks delish. I will not be commenting on the other things. Nope.

Ah, I have SO missed reading your blog. And what a treat it was to have time today to catch up.

Always, always your character comes through - your ethics, your wild, unpredictable wit, your love of life.

happy and yummy moments from Kate and hubby behind the back ...love to George!

Yum the chicken does look good. About the peeing thing...I distinctly remember when I knew I peed when I ran. I was in my mid thirties and helping my dad chase a cow that had escaped the field. With every run...well you know. Still ticks me off. All my dad could do was hoot with laughter.

After watching the youtube video, I knew the house was spectacular. Love the countryside and the long fenced driveway. BTW...you know the old saying..."out of the mouths of babes!"

I have to try this recipe out now. It looks wonderful.

LOVED how you diverted off of the spider eating question- it was and is really freaky to think about- so let's not! The laughing til you pee story is much more fun!!! It isn't that often that I laugh that hard but my husband can make me laugh so hard, so I have to be careful when I'm around him!!!

It was interesting to read about your home. It's huge and hard to imagine it's just the caretaker's house!! Can't imagine what the main house must look like!! I love the colonial look- in one of the posts with pictures inside, you mentioned that you only use certain rooms, is this by choice or instruction? And finally- is your house haunted????

And finally the chicken and I can sum this one up very quickly so you can continue with your day- YUMMMMM!!!!

That spider thing? It's an urban legend. Snopes has proven it wrong, and it used to be eight spiders, now it's down to five. The truth is, it's none. You can check it out here: http://www.snopes.com/science/stats/spiders.asp

Chicken is much tastier, anyway!

Leave it to our children to say the most embarrassing things about us at the most inopportune times. That's why we love them.

I WILL be making the Parmesan Chicken, I WON'T be sleeping much...5 spiders you say?

Yes, it is truly a blessing to be together with the man you love so many years, is it not?

I think you videos are beautiful!Must be the subject matter ?

Jo, thank God for snopes! Now I can sleep easier!
Leif, good to see you again. People, you need to go to Leif's blog and begin reading. I am totally hooked!
And Amy, we live in the main house. We are caretaking the main house. There is no other dwelling on the property other than a barn. We don't use the 3rd floor. There's a room downstairs that we don't use either. It's the parlor and is full of the owners things. We have more than enough space. And no, I have met no ghosts.
Have a great day, all!

I am going to put duct tape over my mouth when I sleep! Or do you think then the spiders will climb into my ears & nose? Moving right along....
:-)

That chicken was sounding pretty tasty until I came to the spiders part! Ick!! You've got to be kidding! ;P

Coughing and sneezing can, at the 'right' time, make me pee ... TMI?

The chicken looks great, but you managed to gross me out with the spider thing...

I do hate to hear about the spiders...but I do love to read all about George! What a handsome, handsome fellow!! Those amazing eyes!

Mmmm I saw this recipe on PW and I need to make it :)

I love your George button - Got Stick! And everytime I visit I eye that cream of mushroom soup - & plan to try it.

And thanks for the visit/comment:)

I made that dish last night too:)
I looked at it at the right time, when I had no idea what to make for dinner and it was almost 5:00. It was quick, easy and delicious. Even my girls ate it. My husband wants to add it to our regular menu.

OMG - that last question has got me feeling choked!! I wake up occasionally feeling as though I've swallowed something I shouldn't have and need to gulp a large glass of water.

Hello - I found your blog via Iowa Grasslands and want to say Thank you for the parmesan chicken recipe. A zillion years ago my mother used to make that (or something very similar) and sadly, the recipe managed to get lost or thrown away... I'm looking forward to trying it. Thanks once again and warm wishes to you from Suffolk, England

Take it from me, the Dutch love nutmeg on just about everything. Remember, I am married to a Dutch man.
Has anyone ever told you that in your and Debra's photos ...you could be sisters?

:) dishes that make people love even more are always wonderful

I wonder how it was that you found such a place to live in. It is a beautiful home. And even though the horses aren't there, somehow I feel that you are in a good place.